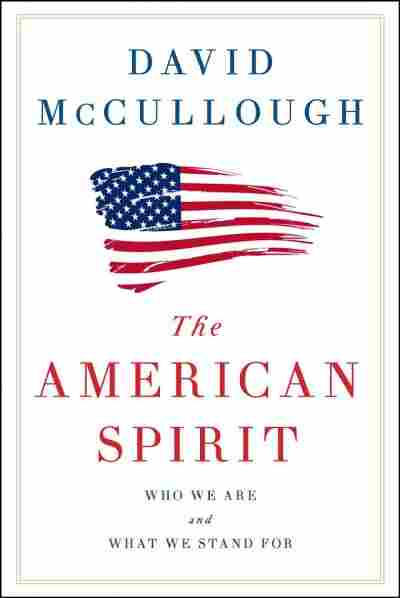 Who We Are and What We Stand for

Speeches in book form have become a reliable cash cow for publishers. The usual formula is this: Find a commencement speech that's gone viral on YouTube, publish it with illustrations in a small hardcover format, and watch as it gets snapped up by the target demographic (in this case, that would be "people who realized they forgot to buy a present while driving to their nephew's high school graduation").

There are happy exceptions, of course, and historian David McCullough's new collection of speeches, The American Spirit: Who We Are and What We Stand For, is one of them. It's a slim volume, and yes, it's illustrated, but it's full of knowledge, wit and optimism, and McCullough's characteristic erudition shines through on every page.

The theme of these collected speeches, which were delivered between 1989 and 2016, is history. That's not surprising, of course; McCullough is one of America's best-known historians, thanks to bestselling books like Truman, John Adams, and 1776. The winner of two Pulitzer Prizes and the Presidential Medal of Freedom, he's essentially the elder statesman of American history, which he calls "our definition as a people and a nation ... a story like no other, our greatest natural resource."

In The American Spirit, McCullough doesn't confine himself to the subjects of his previous books. The first speech in the volume, delivered before a joint session of the U.S. Congress, begins and ends with a discussion of Simon Willard, the artisan who designed a clock that accompanies a statue of Clio, the muse of history, in National Statuary Hall. Another concerns Benjamin Rush, an 18th-century physician who was a pioneering student of mental illness.

That's not to say he doesn't give the more famous historical figures their due. In one speech, he marvels at Thomas Jefferson writing the Declaration of Independence: "He had no library at hand, no supply of books to draw upon, this most bookish of men, and he needed none because, as he later explained, he wanted only to say what everyone already knew." In another, he pays tribute to the Marquis de Lafayette, and manages to work in references to John Singer Sargent, Gertrude Stein, Cole Porter and Josephine Baker.

It's a wide-ranging collection, but it's not just a series of history lessons. McCullough teaches us about history, but also how to think about it, and why it matters. "[I]t seems to me that one of the truths about history that needs to be made clear to a student or to a reader is that nothing ever had to happen the way it happened," he says in one speech. "History could have gone off in any number of directions in any number of different ways at almost any point, just as your own life can. ... Nothing happens in a vacuum. Actions have consequences. These observations all sound self-evident. But they're not — and particularly to a young person trying to understand life."

Many of the speeches in The American Spirit were delivered at university commencements, and McCullough does occasionally dispense advice to his audiences, the most common exhortation being "Read books." They're not all related to academia, either — he advises graduates to eschew profanity and stop saying "like" and "actually," which is a losing battle, but still sounds charming coming from him.

'The American Spirit' arrives at a time in which optimism is in short supply on both sides of the political spectrum. McCullough urges us to keep the faith.

McCullough is an incredibly charismatic speaker, and that comes through in these speeches. He can also be quite funny. In a commencement speech at Union College in Schenectady. N.Y., he waxes ... not quite rhapsodic about one of the school's most well-known graduates: "And if Chester A. Arthur, Class of 1848, is not one of our best-known presidents of the United States, he was unquestionably one of the tallest and best-tailored, a solid, well-meaning chief executive all-in-all, and the first ever to walk over the Brooklyn Bridge."

The American Spirit arrives at a time in which optimism is in short supply on both sides of the political spectrum. McCullough urges us to keep the faith, to "beware the purists, the doctrinaires," and to quit second-guessing those who came before us ("We should never look down on those of the past and say they should have known better. What do you think they will be saying about us in the future?"). His faith in the country is touching, and this book is a gift (and not just a last-minute one for your nephew, either). As McCullough writes, "History is both now and then, today and yesterday." It's a powerful argument for keeping history alive.