Accessibility links
Interview: Kate Moore, Author Of 'The Radium Girls' Kate Moore's new book digs into the short, painful lives of the Radium Girls, who worked painting luminous dials on watches and clocks — and were poisoned by the glowing radium paint they used. 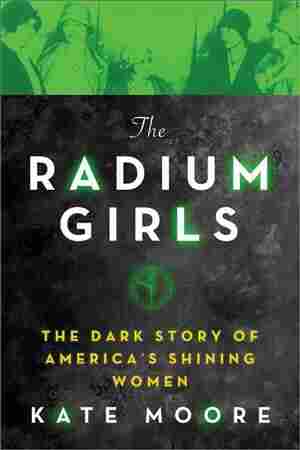 In the early days of the 20th century, the United States Radium Corporation had factories in New Jersey and Illinois, where they employed mostly women to paint watch and clock faces with their luminous radium paint. The paint got everywhere — hair, hands, clothes, and mouths.

They were called the shining girls, because they quite literally glowed in the dark. And they were dying.

Kate Moore's new book The Radium Girls is about the young women who were poisoned by the radium paint — and the five who sued United States Radium in a case that led to labor safety standards and workers' rights advances.

Radioactivity wasn't well understood back then — in fact, radium was considered a wonder substance, and it turned up everywhere. "Radium truly was an international craze," Moore says. "It was in everything from cosmetics to food, and it very much had an allure to it."

On the boost to the radium industry during World War I

Soldiers needed watches, and people needed it for the planes and the trucks and so on, and so the dial painters, who were the Radium Girls, they were employed to paint all these dials with luminous radium paint, and they were taught to lip-point — so, to put their brushes between their lips to make a fine point for the detailed handiwork ... Mae Cubberley, who's one of the Radium Girls that I write about in the book, she said "The first thing we said was, 'Does this stuff hurt you?'" And their managers said no.

On the beginnings of illness among the Radium Girls

When the Radium Girls started to get sick, about five years after they started dial painting, the radium firms were determined that they would not link this insidious disease that was taking so long to show itself — and that was one of the problems the girls had.

It would start quite innocently, actually — it would start perhaps with an aching limb, or a bad tooth ... but as the sickness developed and set in with the women, it got a lot more gruesome. All of their teeth would fall out, sometimes replaced by ulcers that would then seep pus constantly. And that aching limb would actually start to spontaneously fracture. And it might not be a limb, it might be their spine, it might be a jawbone.

On the Radium Girls' effect on the Manhattan Project

There was a direct link. Glenn Seaborg, who was a leading scientist on the Manhattan Project, literally wrote in his diary that he had a vision of the ghost girls, of the shining girls, the Radium Girls, and he therefore insisted that they had to do research into the materials that they were using on the Manhattan Project. It was found that they were biomedically very similar to radium, and therefore there were nonnegotiable safety guidelines put in place. And after the war, the Atomic Energy Commission officials actually said the Radium Girls were invaluable, because if it hadn't been for them, countless thousands of other workers would have been killed.

On the lives of the surviving Radium Girls

Through their willingness to allow scientists to probe their bodies, they have given us a store of knowledge about internal radiation that we simply would not otherwise have had if they weren't prepared to do that. And I think for many of the women, it was their gift to humanity, that we're still benefiting from today.