Accessibility links
Bernie Sanders and DNC Chair Tom Perez Have Been Touring The Country Together The Democratic "unity tour" has produced less-than-unifying headlines for the out-of-power party as progressives seek to oppose President Trump and the GOP. 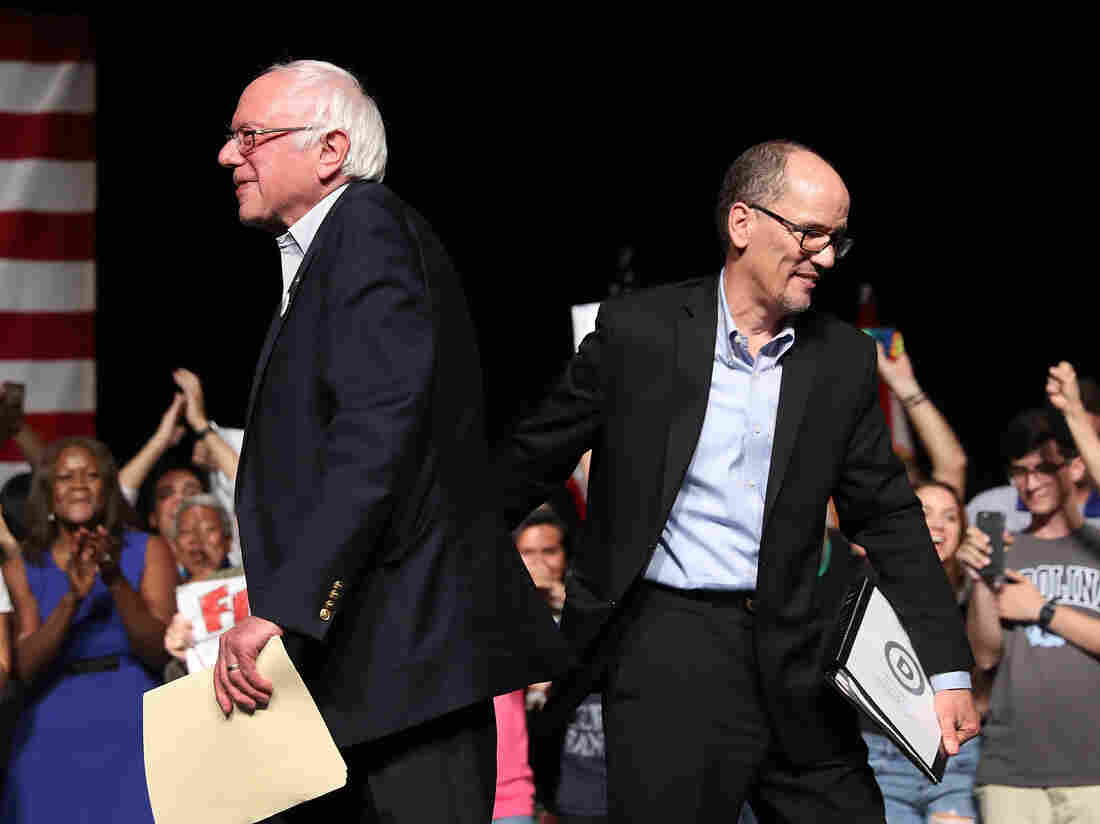 Sen. Bernie Sanders and Democratic National Committee Chair Tom Perez walk past each other during their "Come Together and Fight Back" tour at the James L. Knight Center on Wednesday in Miami, Fla. Joe Raedle/Getty Images hide caption 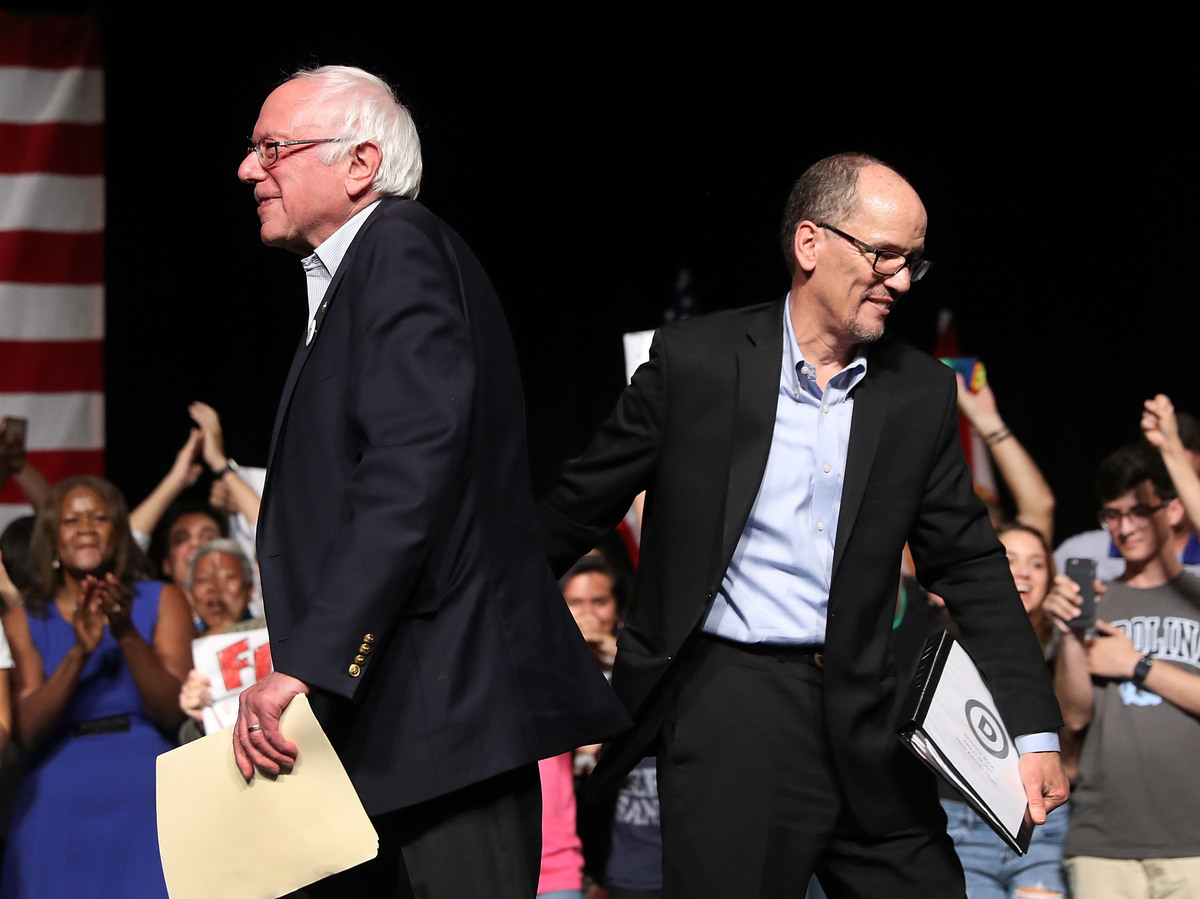 Sen. Bernie Sanders and Democratic National Committee Chair Tom Perez walk past each other during their "Come Together and Fight Back" tour at the James L. Knight Center on Wednesday in Miami, Fla.

Things were going well for the Democrats in Miami.

Democratic National Committee Chairman Tom Perez and Sen. Bernie Sanders, I-Vt., hadn't exactly sold out the downtown theater they were campaigning in, but the audience was solid and energetic.

The anti-DNC catcalls that had plagued early stops on the uneasy allies' weeklong unity tour hadn't surfaced. And both Perez and Sanders had delivered fiery speeches that had pumped up the crowd in a key city of a critical swing state.

But when the music faded down, things took a turn.

A Sanders fan rushed the stage, grabbed the microphone, and shouted, "Bernie would have won!" The audience joined in the cheer, loudly repeating an alternate reality rallying cry that didn't exactly scream, "Democratic Unity Tour."

The DJ quickly drowned out the chant with a new song — Johnny Cash's "I've Been Everywhere."

It was fitting. Because while Perez and Sanders weren't visiting Reno, Chicago, Fargo and Minnesota, their itinerary was kind of close: Maine, Kentucky, Florida, Texas, Nebraska, Utah, Arizona and Nevada.

"To talk and listen and learn"

Perez said the goal of the joint trip is to begin to chip away at the trust and credibility gap that currently exists between the DNC and progressive Sanders supporters. "This is exactly why we're going to every corner of this country," Perez said. "To rural America, to urban America, to every corner in between. To talk and listen and learn."

Conversations with the people who showed up at the events show that Perez and Democrats have a lot of work to do.

Melissa Bernardo is the exact type of young progressive voter that should be in the Democratic Party's camp. Waiting for Perez and Sanders in Miami along with a friend, she explained that the two of them are graduate students. "Karina does research on immigration and detention centers. And I do research on climate change and the impacts on agriculture."

Those are two key issues for Democrats. And yet, while Bernardo loves Bernie Sanders, she's ambivalent — if not hostile — toward the Democratic Party. "You took someone who had corporate backing, and that's what you got," she said, addressing party leaders. "America was primed for something different. And Bernie and Trump were both something different."

The goal of the tour is to convince people like Bernardo that the DNC is on their side.

That's why, despite the fact he isn't a Democrat and doesn't plan on ever becoming one, Perez brought Sanders on the tour.

Sanders is a rock star with the type of progressives who are wary of the DNC. That was clear after the Miami event, as Sanders tried to make his way through a hotel lobby.

He was mobbed by cameras, boom mics and fans.

"You're the best!" one fan yelled.

"You're the real man!" said another. 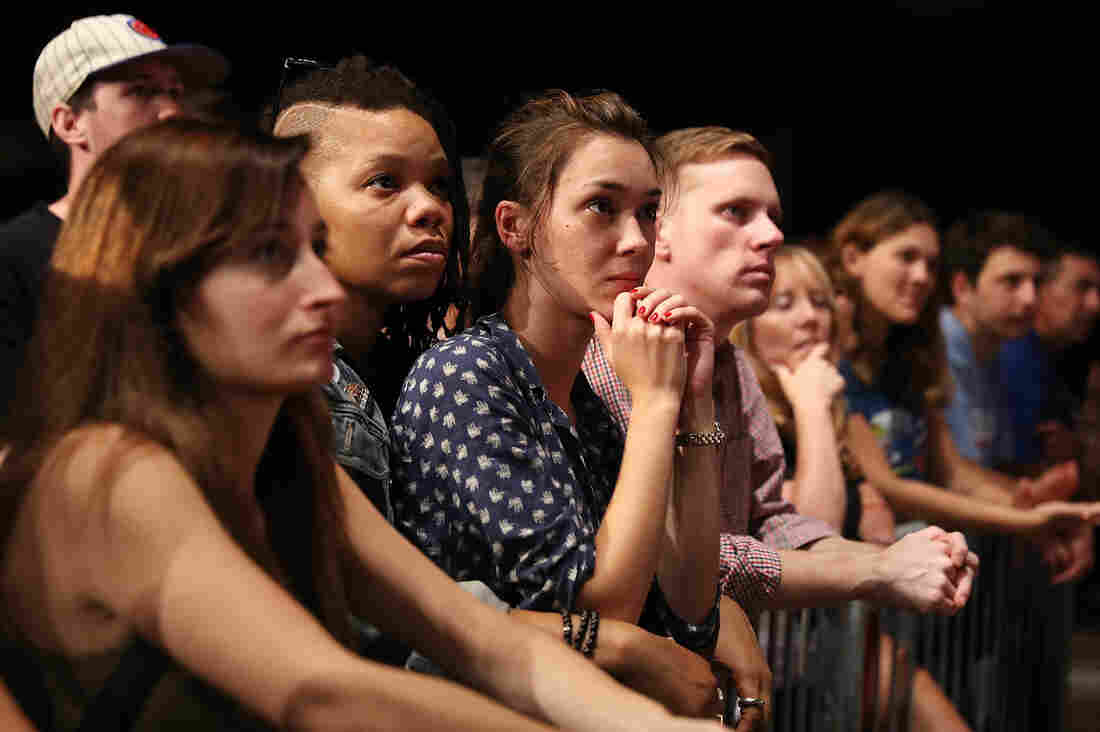 People listen during an event that featured DNC Chair Tom Perez and Sen. Bernie Sanders during their "Come Together and Fight Back" tour at the James L Knight Center on Wednesday in Miami, Fla. Joe Raedle/Getty Images hide caption 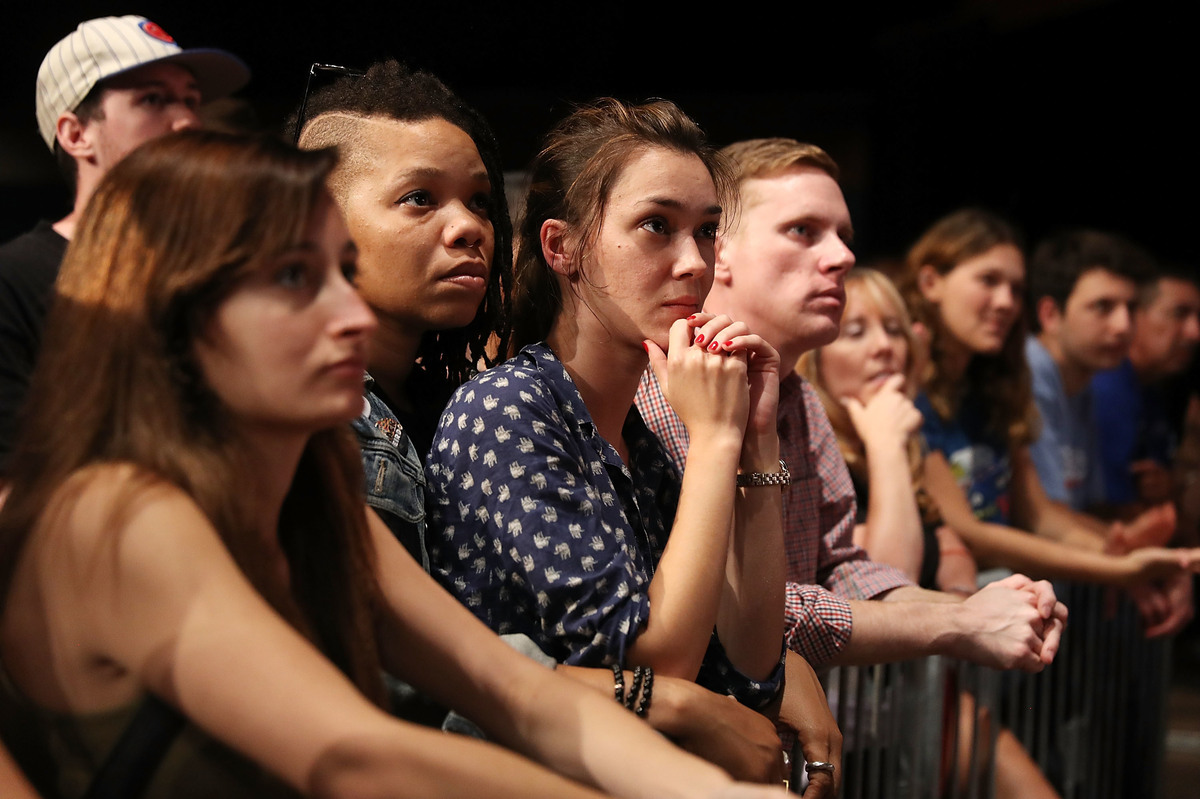 People listen during an event that featured DNC Chair Tom Perez and Sen. Bernie Sanders during their "Come Together and Fight Back" tour at the James L Knight Center on Wednesday in Miami, Fla.

"How in God's name are they winning elections?"

Sanders would offer a lot of credibility if he threw his arms around the DNC.

But that didn't happen over the course of the week. Over and over again, Sanders made headlines for critiquing the Democratic Party.

In a backstage dressing room after a speech in Grand Prairie, Texas, Sanders explained what he meant. "Democrats have not put forward an agenda that speaks to the needs of people who are in pain," he said.

Sanders is convinced the key to success is to push the party to the left. He believes the majority of the country is on board with progressive policies like a $15 minimum wage, and a Medicare-for-all health care plan. "On issue after issue, people are understanding that the views that I and other progressives have been expounding are the views of America."

And yet, Republicans dominate state and federal government.

"How in God's name are they winning elections?" Sanders asked, exasperated. "And I think the answer to that is the failure of the Democratic Party — to have a progressive agenda, to bring people into the party, to mobilize people. And that's what I'm running around this country trying to do."

What can the party to do turn this around? Sanders has a few ideas. "It has to articulate a very progressive agenda. I think it needs rules — and there are people are going to be working on that shortly — which open up the political party," he said. "I think it needs to make clear that it is prepared to take on Wall Street and the billionaire class and the fossil fuel industry in a very unambivalent way."

"Incredible alignment in what our goals are"

So what's in this for Tom Perez? Why spend time and money flying around the country with someone so eager to criticize the party Perez now heads?

The former Labor Department secretary is new to the DNC job, having won it earlier this year in an unusually competitive race for the vacated seat.

Perez was one of the most progressive members of the Obama Cabinet, but he exacerbated the party's problems with Sanders voters by defeating Rep. Keith Ellison, D-Minn., who Sanders had endorsed.

Backstage in Miami while Sanders was speaking, Perez argued that the best way to win the support of skeptical Sanders progressives is to get in the same room with them.

"When we sit side-by-side and talk about what our fears and hopes are, what I've been learning is that we have incredible alignment in what our goals are," Perez said.

"So for me, I think the best way to make sure that we remain united is to talk about the issues that people care the most about. And then you talk about it and you say, wow, we really are in agreement."

And traveling around with Sanders gives him an entry point to have that conversation.

This approach seemed to work during Perez's speech in Miami. At several points, the crowd began to grow impatient for Perez to wrap up and bring out Sanders. But then Perez would talk about progressive causes like health care or climate change, and win big applause.

Perez also appears eager to show the base just how angry he is. "The Republican leadership doesn't give a sh-- about people who are suffering," he said at several stops on the trip. Other recurring lines in his stump speech include calling Trump's spending plan a "sh---y budget."

It can feel a little forced — like it's an attempt to channel the shock value of the Trump campaign — but Perez says he's genuinely angry. "That's Tom Perez speaking from the heart," he said. "We are in uncharted territories right now with this president."

Perhaps anger is the best way to unite progressive voters in the Trump era.

"Donald Trump is a disaster. He's a threat to our democracy," Perez said. "And I think everybody in that room that we were in in Miami, and yesterday, and the day before, and tomorrow, and through the weekend, understands that."

That may be the case. But the job in front of Perez is to convince them all that the best way to oppose Trump is through the Democratic Party.