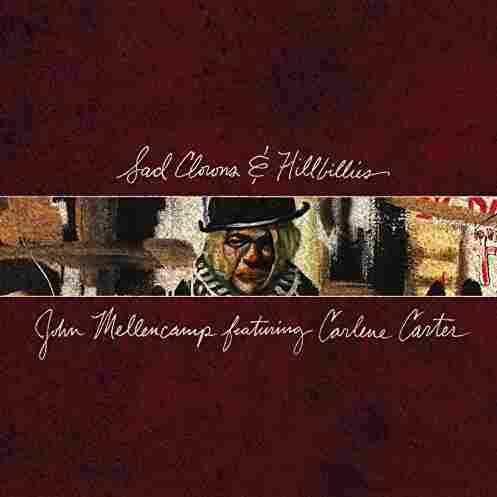 Sad Clowns & Hillbillies was recorded in Nashville ... but not that Nashville. John Mellencamp's latest outing was forged at his own Belmont Mall studio in Nashville, Indiana, the spot outside of Bloomington that's been his musical headquarters for decades. He did, however, team up with Music City royalty on the record: Carlene Carter, daughter of country legends Carl Smith and June Carter, and stepdaughter of Johnny Cash. Mellencamp developed a rapport with Carter while working with her on projects like 2012's Ghost Brothers of Darkland County musical and the soundtrack for the 2015 film Ithaca, as well as sharing a tour.

Sad Clowns isn't specifically a duets album — some songs feature either Mellencamp or Carter alone in the spotlight, and the material is a mix of songs penned by Mellencamp and Carter, as well as some covers. But Carter's deep country roots are a constant presence, even on tracks where she doesn't appear. The pair originally envisioned the album as a collection of spiritual country tunes, and while that idea mostly fell by the wayside, a few tracks from that concept ("Battle of Angels," "Damascus Road," "My Soul's Got Wings") seem to have survived.

Colin Stetson, 'All This I Do For Glory'

Of course, Mellencamp doesn't need any outside influences in order to keep things rootsy. The man whose formative influences include Woody Guthrie (the source of one of Sad Clowns' songs) is coming off a string of earthy, acoustic-based albums produced by roots impresario T-Bone Burnett, and Mellencamp's mid-'80s shift to a more roots-rock oriented sound was the most significant stylistic move of his career. This predominantly acoustic album is simply the next foot forward in a direction the heartland hero's been heading for a long time.

Like his songwriting, Mellencamp's instrument has matured over the years. With a lifetime's worth of smoke in his lungs, Mellencamp, now 65, delivers the songs on Sad Clowns in a soulful rasp alternately suggestive of Tom Waits and latter-day Bob Dylan. The nooks and crannies his voice has gained over the years only aid in achieving the same level of been-around-the-block gravitas found in Mellencamp's lyrics here.

Sad Clowns is a record about our struggles within ourselves and with the world around us. Even the album's covers seem carefully chosen to fit that feel. "Grandview," written by Mellencamp cohort Bobby Clark, is the album's only real rocker and features ex-Guns N' Roses guitarist Izzy Stradlin and former Tom Petty & The Heartbreakers drummer Stan Lynch. It's sung from the perspective a working-class middle-aged man whose biggest dream is outfitting himself with a trailer and getting out of town. "Early Bird Café" was originally cut by the Jerry Hahn Brotherhood in 1970 (Mellencamp never forgot hearing them play it live as a teen), and its steady-rolling account of existential bemusement and the search for salvation is right in the singer's wheelhouse. Mickey Newbury's "Mobile Blue" is ostensibly more about dealing with romantic wreckage, but its earthy discomfiture puts it right in line with the rest.

"My Soul's Got Wings" isn't technically a cover, since Mellencamp wrote the music himself to accompany an orphaned set of Woody Guthrie lyrics, a la Wilco and Billy Bragg's Mermaid Avenue project. Mellencamp and Carter deliver the tune as a gospel stomp, as they sing of transcending the dreariness and weariness of life by ascending to a home on high.

The Carter-penned/sung "Damascus Road" is about the search for deliverance too, with a narrative full of biblical-sounding details surrounding a "come-to-Jesus revelation." But even the cuts that aren't explicitly occupied with overtly theological concerns involve some serious spiritual reckoning, like the stark, minor-key "What Kind of Man Am I," a song of merciless self-reflection with the goal of freedom for the soul.

By the album's close, however, Mellencamp is back to more earthly matters. In his most gravelly, Tom Waits-tinged tones, he clambers atop the spare, spectral, piano-led arrangement of "Easy Target" to caste a doleful glance at the state of the nation, encompassing systemic racism, class discrimination, and the price we pay for a polarized America. Mellencamp ends Sad Clowns & Hillbillies bemoaning "a country's broken heart." By the time it's done, you're in sore need of some of that salvation he and Carter were hailing a few tracks back; so what else can you do but start the damn thing over again?

Sad Clowns & Hillbillies is out April 28 on Republic Records.