Accessibility links
White House Seeks Action On Taxes And Health Care As Congress Works To Avoid Government Shutdown Congress must act by Friday to avoid a partial government shutdown on Donald Trump's 100th day in office. That could be complicated as the White House pushes a border wall, health care and taxes. 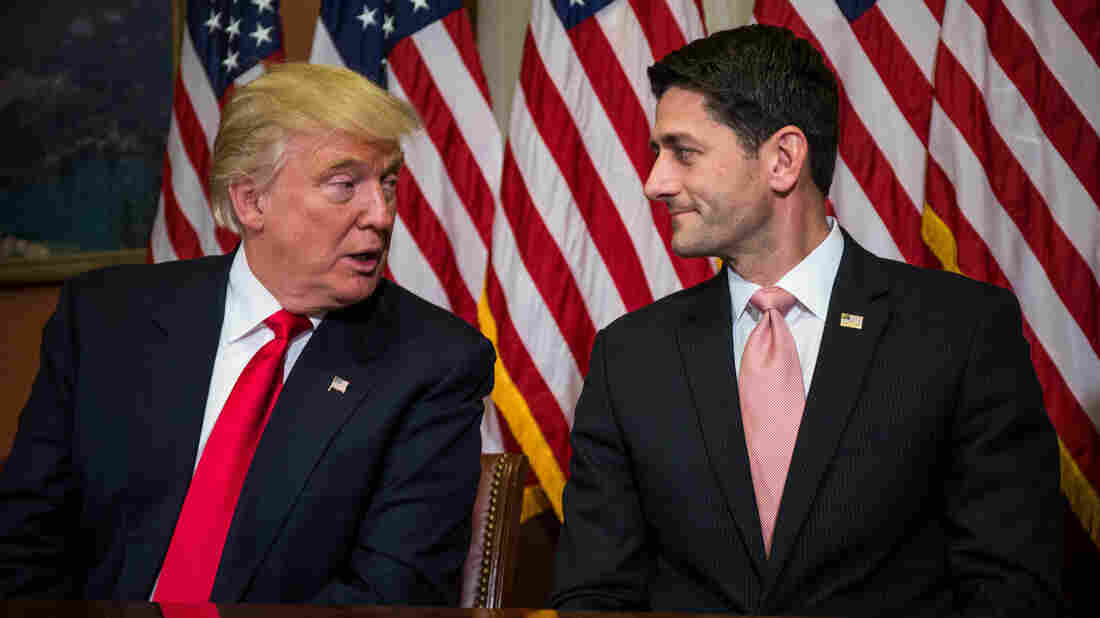 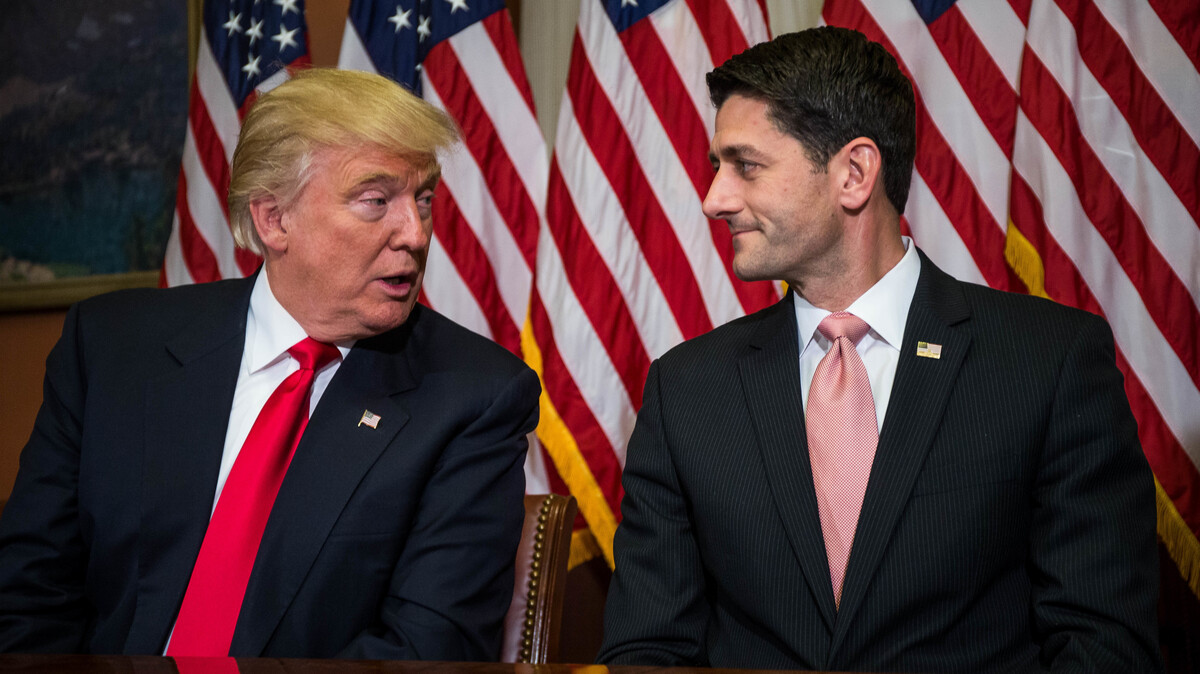 Then President-elect Donald Trump meets with House Speaker Paul Ryan at the U.S. Capitol in November.

Congress returns Tuesday from its spring recess, facing yet another down-to-the-wire spate of deal-making — and a White House anxious to claim its first major legislative win.

On Friday night, the funding measure lawmakers approved last year to keep the federal government running will expire. The timing leaves members of the House and Senate just four days to reach a new agreement to fund the government, or risk a partial shutdown of federal agencies on Saturday — the 100th day of Donald Trump's presidency.

Ever aware of the consequences, House Speaker Paul Ryan says passing a spending bill is his primary goal this week — even as the White House is urging the GOP to resuscitate last month's failed attempt to repeal and replace the Affordable Care Act and the president is making a fresh push on a tax overhaul.

"Wherever we land will be a product the president can and will support," Ryan said of the spending bill during a Saturday afternoon conference call with Republican lawmakers, according to a GOP aide.

A viable spending deal will require both Democratic support and President Trump's ultimate approval, setting a potential political landmine. The White House is signaling that it wants the bill to include new funding to build President Trump's proposed wall on the U.S.-Mexico border, though it's becoming less clear how far they are willing to push the issue.

White House chief of staff Reince Priebus echoed that sentiment, appearing Sunday on NBC's Meet the Press. Priebus said he believes the spending bill will include "something satisfactory" regarding the funding for the border wall. He left some wiggle room for funds to be provided for border security instead of specifically for a wall.

Priebus also declined to say that Trump would veto a bill that didn't include wall funding.

Democrats have for weeks warned against such "poison pill" additions to the spending bill and say they will not support allocating money for Trump's pet project. Senate Democratic leader Chuck Schumer basically told the president to butt out on Sunday.

"We'd ask him to let us do our work, not throw in some last-minute poison pills that could undo it and we could get this done," Schumer told reporters.

Meanwhile, Ryan says he's encouraged by the GOP's efforts toward writing a new health care bill — one aimed at bridging the gaps between centrist Republicans and hard-line conservative members of the House Freedom Caucus.

The White House pushed for a vote this week to allow Republicans to move ahead with a tax overhaul and other priorities. But Ryan — having learned the lesson of last month's failed attempt — told Republican lawmakers on Saturday's conference call there will be a vote on a new health care bill only when enough support exists to pass it.

President Trump is driving a hard bargain in trying to force Democrats to the negotiating table. Posting on Twitter on Sunday, he appeared to renew his threat to withhold payments owed to health insurance companies under the Affordable Care Act. Such a move would force it to collapse.

ObamaCare is in serious trouble. The Dems need big money to keep it going - otherwise it dies far sooner than anyone would have thought.

But Trump also said in recent days that it didn't much matter whether another health care vote took place before or after his first 100 days were up. "No particular rush. But we'll see what happens," Trump told reporters last week.

Adding a tax overhaul to the agenda

Add to the already packed and complicated congressional agenda this — overhauling the country's tax code.

Congress is taking steps to get the ball rolling on tax legislation. The chief tax-writing committee in the House is set to hold hearings this week on the Republicans' import tax proposal known as the "border adjustment tax."

Big TAX REFORM AND TAX REDUCTION will be announced next Wednesday.

Trump told The Associated Press his plan will cut taxes for both individuals and businesses, but it's expected to be more of a broad outline than a specific plan.

As for the timeline, the administration now says it aims to overhaul the country's tax code by late 2017. Treasury Secretary Steven Mnuchin initially set a goal of getting tax reform passed by August. That deadline has slipped on account of the delay caused by the GOP's failed health care bill.

Democrats, on the other hand, say tax reform won't move forward without the president first making his tax returns public — to make clear how he might benefit from the proposed legislation.