Accessibility links
The Warfare May Be Remote But The Trauma Is Real Drone pilots and intelligence analysts who work with them may not be in physical danger themselves but "no doubt are war fighters" who experience psychological stress, says the Air Force. 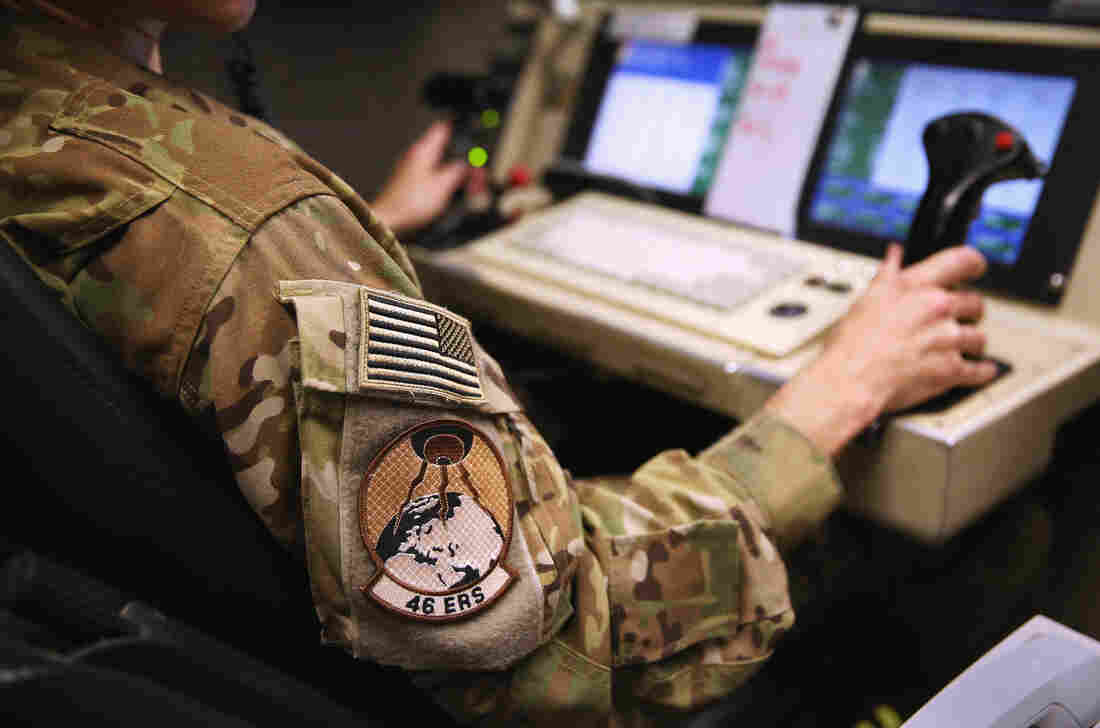 A pilot prepares to launch an unmanned aerial vehicle from a ground control station earlier this year. The Air Force is moving to treat psychological stress faced by remote pilots and analysts a little more like the effects of traditional warfare. John Moore/Getty Images hide caption 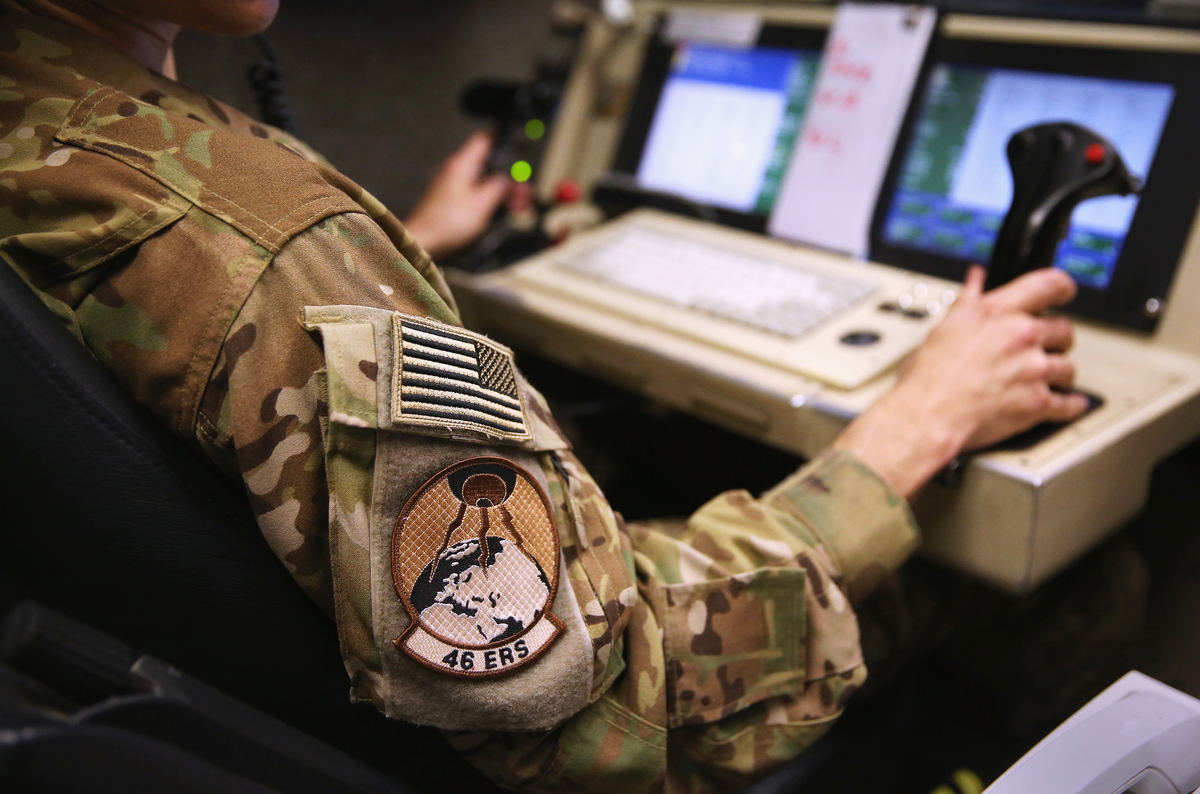 A pilot prepares to launch an unmanned aerial vehicle from a ground control station earlier this year. The Air Force is moving to treat psychological stress faced by remote pilots and analysts a little more like the effects of traditional warfare.

After high school, Staff Sgt. Kimi wanted to go to art school, but she didn't have the money. So she joined the military.

Intelligence analysts like Kimi work with drone pilots and others in the Air Force to guide decisions about where to deploy weapons in the fight against ISIS and al-Qaida. (The U.S. Air Force won't release her last name because of the high-security work she does).

Safety Classes Growing Along With Popularity Of Drones March 30, 2017

These airmen stationed at home in the United States may not be in physical danger themselves, but their work carries its own set of psychological stressors – something the Air Force is increasingly recognizing as it moves toward more remote warfare.

I mean that's warfare; it's clear and simple, and it's in HDTV.

Kimi is now 26 and stationed with the 480th Intelligence, Surveillance and Reconnaissance Wing at Langley Air Force Base in Hampton, Va., where she spends hours monitoring video feeds from war zones.

"Since I wanted to go to art school for photography, the recruiter told me that this was like working with photography. But ... it's not," Kimi said with a wry laugh.

The wing's commander, Col. Jason Brown, says these analysts watch events unfold thousands of miles away in some of the most troubled places in the world.

"They're exposed to the most gruesome things that you can think about that could happen on a battlefield," Brown said. "They find mass graves; they witness executions."

One Air Force survey found that among analysts engaged in this kind of work, nearly one in five had witnessed a rape within the past year. Some airmen reported witnessing more than 100 incidents of rape or torture, according Lt. Col. Cameron Thurman, the wing's surgeon.

"I mean that's warfare; it's clear and simple, and it's in HDTV," Brown said.

The airmen can't just look away; they're supporting and often helping to protect U.S. troops and their allies on the ground by watching out for threats, and guiding aircraft and drone pilots.

Thurman says observing the horrors of war, over and over again — even from a distance — carries a heavy burden.

The recruiter told me that this was like working with photography. But ... it's not.

"You don't need a fancy study to tell you that watching someone beheaded, or skinned alive, or tortured to death, is gonna have an impact on you as a human being," Thurman said. "Everybody understands that. What was not widely understood is the level of exposure that our wing has to that type of incident. We see it all."

Thurman is a medical doctor overseeing a team of physicians and psychologists embedded with the 480th. They work with chaplains to provide mental health support for analysts engaged in remote warfare. The wing made that decision a few years ago in response to the higher rates of occupational stress and suicidal thoughts reported among airmen doing this work.

"There are some things you just can't unsee," Thurman said.

And it's not just what they see, but the weight of decisions they have to make, he says. Airmen often have to discern whether they're looking at a group of women and children or a group of combatants.

Staff Sgt. Kimi remembers one especially tough call a few years ago that prompted her to reach out for support.

"To this day I still think about it, but it's been a couple of years," she said with a heavy sigh. "I made the correct decision, but knowing that I could have made the wrong one, and a lot of people could have died because of a wrong decision — I just could not stop thinking about it."

Those decisions have been difficult for Staff Sgt. Alicia, whose last name is also being withheld. In the early days of the fight against ISIS, Alicia says she struggled with some of the work she was being asked to do.

"We were striking a lot at that time, and for me, it felt like I wasn't getting enough of the story behind the strikes," she said. "I like to know everything I can about what we're gonna be doing, and for me, that was what was bothering me. I felt like I didn't know enough."

Alicia, now 27, says she switched duties for awhile, and eventually reached out to an Air Force psychologist, Lt. Col. Alan Ogle. Ogle's security clearances allow analysts to talk through situations with him in a level of detail that's not allowed with family and friends, or even other service members without those clearances.

"Sometimes people need to talk about very specific mission details. They need to think through what happened in that previous mission, talk through, 'Hey, did I really do what I needed to do, or could I have done something different?'" Ogle said.

Ogle says remote warfare is also unique in that analysts put in long shifts, often overnight, and then have to transition quickly back and forth between their work and ordinary life.

"They are going literally from combat to cul-de-sac in a short drive," Ogle said. "Ten minutes, 15 minutes, [they] drive home. They've gone from being eyes, head in the fight, and making critical life and death decisions, to then being involved in all the normal ... responsibilities that we have, where they're a spouse, they're a parent."

As the U.S. military shifts to more of this kind of warfare, Brown says it's important to acknowledge the psychological impact of the work. He says the Air Force is trying to ease that burden by treating the trauma of remote warfare a little more like the effects of traditional combat.

"In the 21st century, in the information age, war fighting is no longer a matter of geography; it's a mentality," Brown said. "And these airmen no doubt are war fighters; they have the burden of life and death on their shoulders every day, every time they walk into that facility."