Accessibility links
Book Review: 'Anything Is Possible,' By Elizabeth Strout Elizabeth Strout's new novel-in-stories is a welcome salve for troubled times. A companion volume to last year's My Name is Lucy Barton, Anything is Possible looks at the people Lucy grew up with.

'Anything Is Possible' Is Unafraid To Be Gentle

'Anything Is Possible' Is Unafraid To Be Gentle 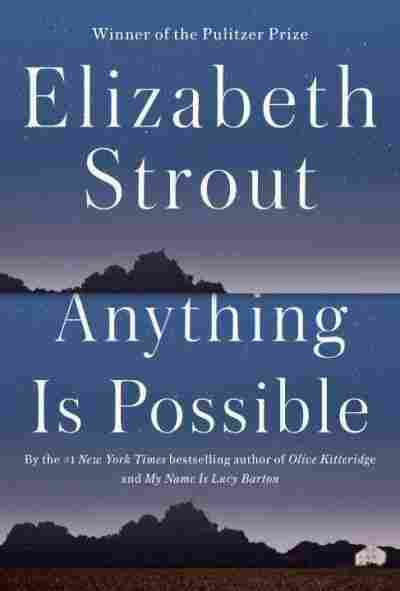 Elizabeth Strout's new novel-in-stories, Anything Is Possible, is welcome literary salve for these alarmingly acrimonious, anxiety-inducing times. These nine linked tales about people who overcome miserable childhoods, severe losses, disheartening marriages, and war trauma to experience moments of amazing grace offer comfort and reassurance. They remind us that a little kindness and compassion can open up surprising possibilities.

Readers who loved My Name is Lucy Barton — Strout's fictional memoir of her eponymous heroine's path from a grim, impoverished childhood in Amgash, Ill., to literary fame in New York — are in for a real treat. Anything Is Possible is a companion volume about the people Lucy came from, and their reactions to her latest successful publication, that memoir.

As she has demonstrated beautifully in books like Amy and Isabelle and Olive Kitteridge, Strout is a master of the story cycle form most closely associated with Sherwood Anderson's Winesburg, Ohio. Like Anderson, she paints cumulative portraits of the heartache and soul of small town America by giving each of her characters a turn under her sympathetic spotlight.

We follow avidly as Strout moves assuredly from one seemingly peripheral character to another: the janitor in Lucy's grade school who recalls her suspicious bruises and nervous refusal to make eye contact in the classroom where she sought safe haven to read after school; the outwardly successful second cousin who shows up at her reading in Chicago; two women who bond over the painful consequences of their mothers' defections from difficult marriages. Each tale builds on earlier chapters. Even the weaker links — about an actress from Maine, and a late-life, mother-daughter reconciliation in Italy — subtly fill in the sky portion of Strout's gracefully constructed narrative puzzle.

One of the strongest stories, "Windmills," addresses two of her pet themes: how "people were always looking to feel superior to someone else," and the healing power of literature. Patty Niceley, a lonely, prematurely widowed high school guidance counselor, is taken aback when she realizes that the sneering student who's just called her Fatty Patty is the daughter of Lucy Barton's bitter sister, Vicky. Patty's loss of control upsets her even more than the girl's rudeness. Downhearted, she phones her self-absorbed sister, Linda, who offers little comfort. "They were just trash, Patty," she says dismissively of the Bartons. (We learn about Linda's horrendous moral compromise in the next chapter.)

Patty, one of the most sympathetic characters in a book that's filled with them, finds both solace and inspiration in Lucy's memoir, which makes her feel both understood and less alone. She's particularly struck by the fact that Lucy managed to love and forgive her parents, despite their grievous failures. Patty reflects, "Lucy Barton had her own shame; oh boy did she have her own shame. And she had risen right straight out of it."

Lucy makes an appearance just once, in another powerfully moving story, "Sister," when she takes a detour from her book tour to visit her brother Pete. It's the first time Lucy's been home since their father's funeral 17 years earlier, though she calls her brother most Sundays. The reunion detonates when her sister Vicky shows up, spewing rancor, but Lucy gets it. Even though she's helped her sister financially, Lucy is the one who got away. (But not completely — when her siblings start trading horror stories of their father's PTSD and their mother's cruelty, Lucy suffers a full-blown panic attack.) Leave it to Strout to find the sweet spot in this tangle of emotional wreckage.

... here's the thing about Strout: She never tries to sugarcoat the fact that it is indeed a sad, hard world.

Does it strain credulity that so many of these outcasts and sad sacks, damaged by their unhappy experiences, manage some measure of redemption? A bit. Yes, her fiction can tend toward the sentimental, but here's the thing about Strout: She never tries to sugarcoat the fact that it is indeed a sad, hard world. She also reminds us that "remorse, well, to be able to show remorse — to be able to be sorry about what we've done that's hurt other people — that keeps us human." Hear ye, hear ye.

In showing such compassion for her characters, Strout makes us care about them and share her belief in the possibility of finding forgiveness and love, however imperfect. In an often hard-hearted, cynical culture, she's not afraid to tout such gentleness: "This was the skin that protected you from the world — this loving of another person you shared your life with," Strout writes. Amazing grace, indeed.