Accessibility links
A New Generation Of Kashmir Rappers Vents Its Rage In The Valley Rappers like Aamir Ame and MC Kash make music that channels political protest and alienation from the Indian state. 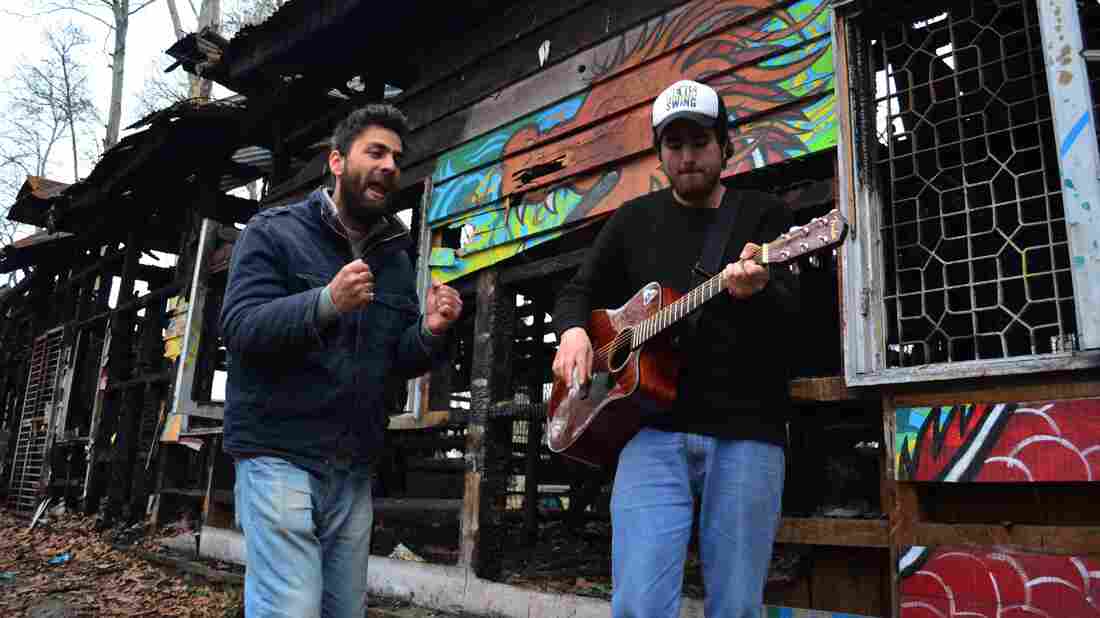 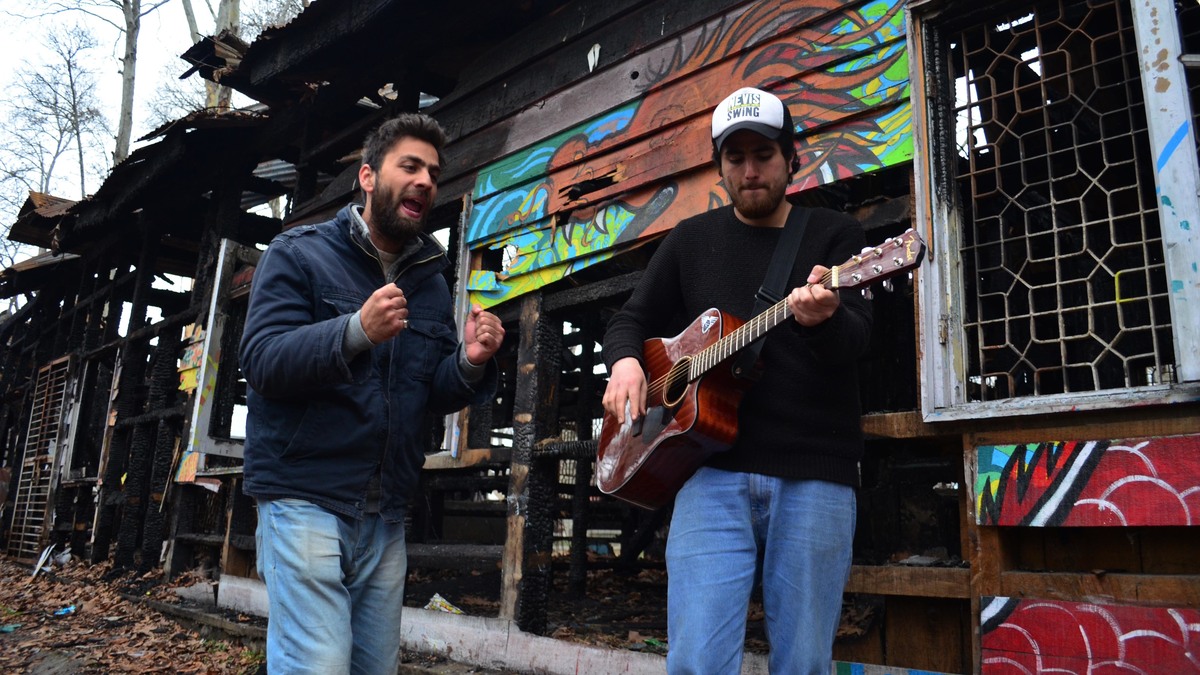 Rap music has found an outlet in Kashmir, the border state between India and Pakistan.

The Muslim-dominated Kashmir Valley, tucked in the Himalayas, might not seem the most likely venue for this music. But Roushan Illahi, Kashmir's leading rapper, says the guns, soldiers and protracted conflict provide the "street reality" that hip-hop is meant to capture.

India and Pakistan have fought three wars over the territory, which bristles with Indian security forces. For months, Kashmiris have come out in the thousands, shedding their fear of batons and bullets. The simmering anger that has burst to the surface has also been expressed in music.

The song "Dead Eyes" addresses the eye injuries that thousands of Kashmiris sustained in the past year, when security patrols fired pellet guns during anti-military demonstrations:

In the broad daylight I got blind
To light darkness, I will abide
I will pelt stones against innocent felony
Yeah, I lost my eyes while fighting tyranny

Aamir Ame, 23, co-wrote the track with two other budding rappers. He says it was his "first political song, an example of survival." Released Jan. 26 on the occasion of India's 68th Republic Day, it went viral. 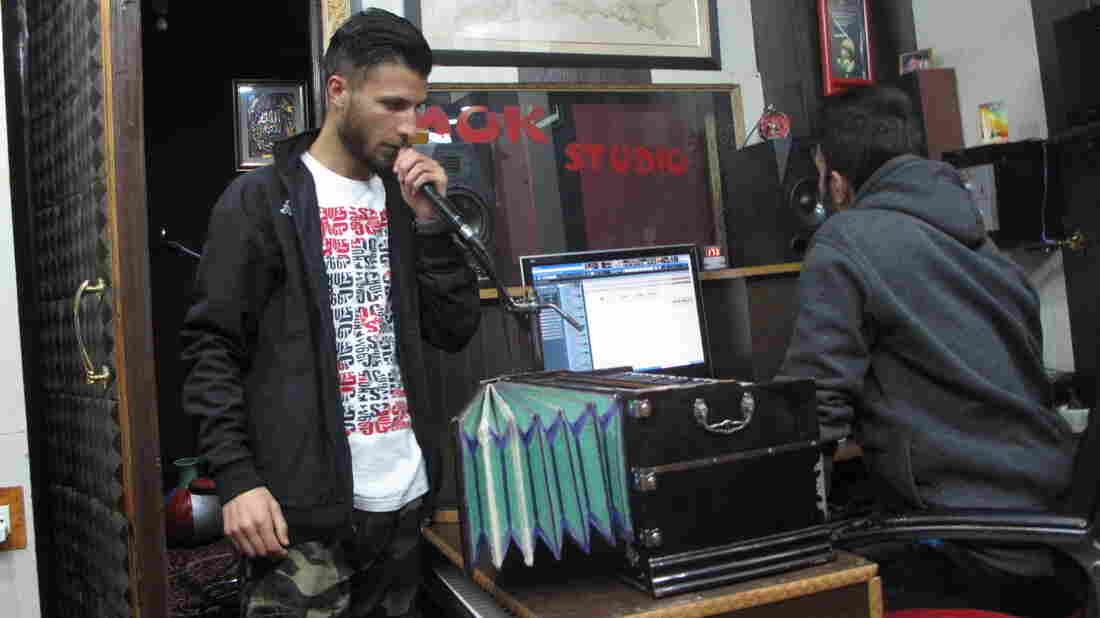 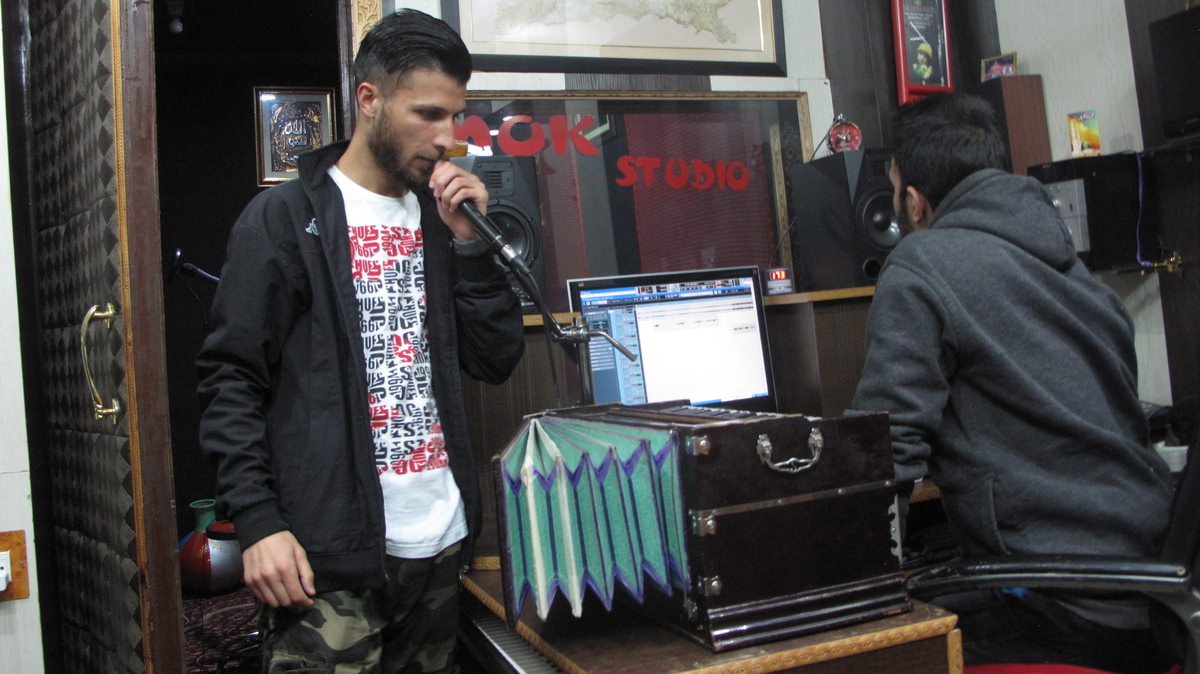 Aamir Ame co-wrote the viral hit "Dead Eye," a tribute to Kashmiris whose eyesight was damaged by pellet guns used by security forces to quell demonstrations. He calls it his first "political" song.

Illahi, whose stage name is MC Kash, understands the appeal. At 27, this brooding son of a poet is credited with ushering rap into the Valley with the song "I Protest," which pulsates with defiance:

Illahi published the song online in 2010, at the height of a major Indian army crackdown, when scores of civilians were killed in clashes with military security forces. It has become an anthem of dissent.

"When I came out in 2010, I was very blunt, I was very direct," Illahi says. "And that's what another tenet of hip-hop or rapping is. If you talk to any one of us, there is a lot anger. That anger stems from this hopelessness that nothing is going to change or nothing is going happen to Kashmir or that people are still going to get killed. And it's bound to give birth to dissent."

"It Shapes ... Your Personality"

Many of the Valley's hip-hop artists were born in the 1990s, when Amnesty International says there were "grave human rights abuses committed by security forces as well as armed opposition groups." The organization "recorded more than 800 cases of torture and deaths in the custody of army and other security forces in the 1990s," and it says "there were hundreds of other cases ... of enforced disappearances from 1989 to 2013."

I ask 24-year-old musician Ali Saifudin whether growing up amid all the violence has made his music a form of political expression. He says he wouldn't go so far as that.

"It's just a natural sentiment, the sentiments on the streets," Saifudin says. "I see news of young men being shot, and I feel anger inside me ... I put all those feelings into a song."

A guitarist, Saifudin says he's been influenced by the music of Neil Young, Bob Dylan and Bob Marley. (He says it was Google that introduced him to their music.) Today, he collaborates with local rapper Mu'Azzam Bhat, also 24, who says he's watched political turmoil firsthand for as long as he can remember.

"I have seen protests on the streets, and I have seen guys picking up stones and fighting the occupation, fighting the armed forces. That's what I've seen from my childhood up to this point," Bhat says. "It shapes ... your personality."

In a Srinagar café that is the meeting ground for Kashmiri artists, Saifudin and Bhat give me an impromptu performance of their song "The Time Is Now." Saifudin says it echoes the sentiments of Bob Marley's "Get Up, Stand Up." It goes:

Put your lungs out,
Go on and scream
For that's how you'll be heard
This ain't the time to sleep

Now wake up!
Open your eyes!
Take a deep breath
And realize
The time to talk is over
It is time to do
With whatever you got
You got to make it through

Enough with all the silence
The crimes and violence
The war outside
And the war inside us...
Anger is our voice,
Rage drives us
And we can't be controlled
There is a beast inside us.

The music of these two master's students in journalism and mass communication reflects the alienation from the Indian state that many young Kashmiris feel. They find inspiration in everyday experiences: Several weeks back, Bhat says, they were puzzling over the lyrics to this song when they were stopped by police.

"They just ordered us out of the car, they started frisking us and for no reason," he says. "We were just young guys hanging out. ... So that's when these lyrics came: 'These men in uniform are as cold as they come / And they will fill your mind with fear, psych you out and hit you up.' It's actually a real event that happened to us, and that's what getting reflected in our music."

The audience for much of this music is online. Musicians say venues in Kashmir are controlled by the state, and that disqualifies most rappers from performing their non-conformist work in public.

In the song "The Time Is Now," Bhat raps about picking up guns and setting off bombs. "And it goes without saying I'm not talking literal bombs here," he says. "What I'm saying is that if you have a pen, and you can write, drop lines that are equivalent to bombs."

For all of the conflict they have witnessed in their young lives, Bhat and Saifudin evince no cynicism. "I know I am angry," Saifudin says, "but I have to direct my anger in a proper manner. It should be reflected in my music ... but not be all about rage.

"You have to understand," he goes on, "that we don't like violence, we don't support violence. ... Nobody wants to pelt stones or stage protests for the heck of it. ... It's for a dignified life ... and that is the ultimate goal."

"You Have To Make Your Own Space"

Roushan Illahi, aka MC Kash, says he's "proud" of young musicians who are "keeping alive the memories of the Kashmiri people through their music." Illahi champions "a de-militarized Kashmir" and insists Kashmiris need to be able to "talk and feel free of any harassment or repercussions."

Illahi's studio was raided in 2010, an episode he calls "nothing serious." But this taciturn artist no longer directly talks against the military establishment — he self-censors. "In Kashmir," he says, "you have to make your own space, and then rely on your luck that you won't get arrested."

Today, Illahi's dissent is subtler. He has most recently teamed up with a rock musician in a piece called "Like A Sufi" that is part dreamy, part heart-pounding. The song captures the mysticism of Sufis, who make up a sect of Islam. But the subtext of the Kashmiri conflict is hard to miss in the opening lines: "I await you / All the fallen / In the garden of remembrance / Like a Sufi."