Accessibility links
Gripping Comics Memoir 'Hostage' Puts You In The Room Where Nothing Happens Cartoonist Guy Delisle departs from the first-person travelogue format which has won him acclaim to chronicle the true story of a man kidnapped and detained for months in the Caucasus region in 1997. 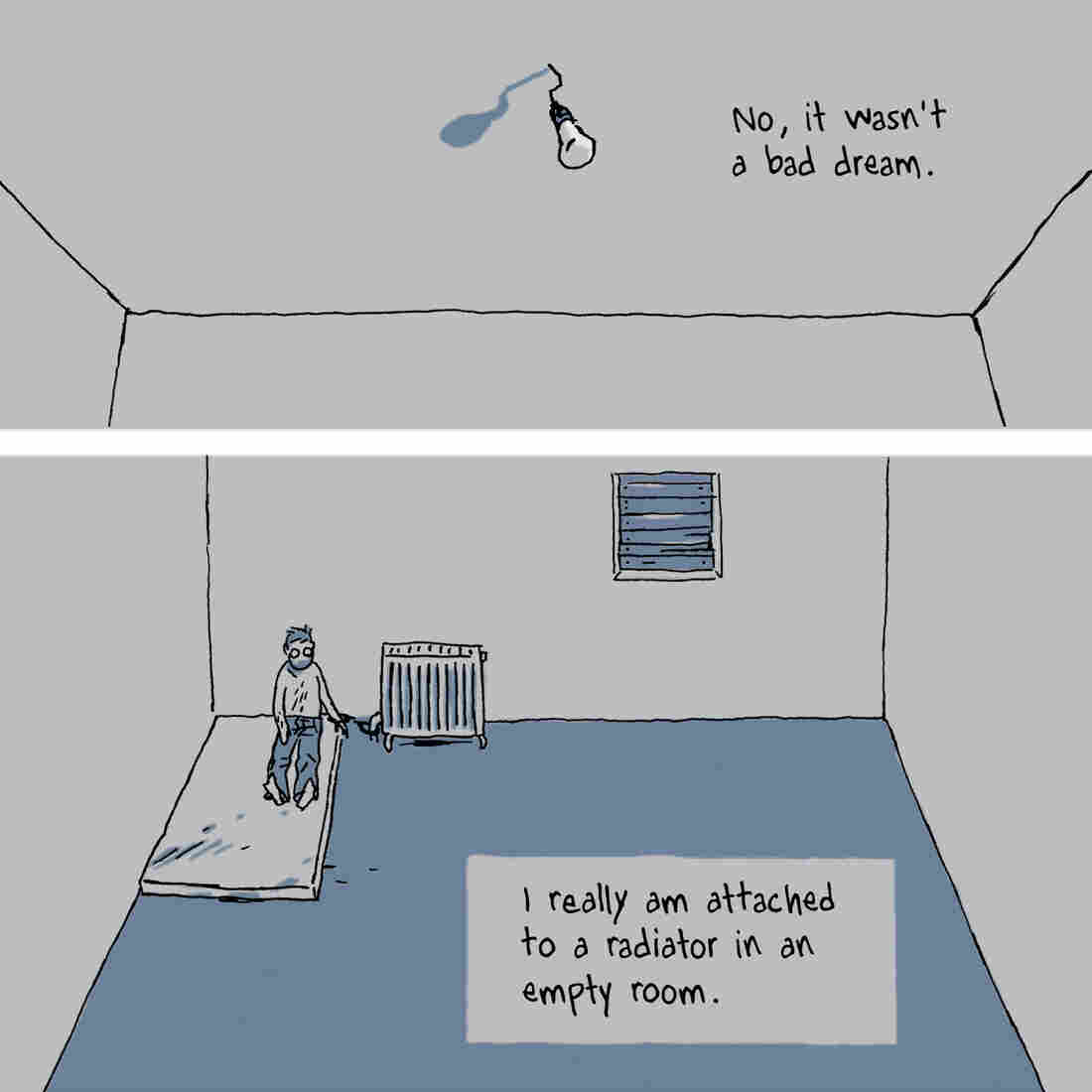 A page from Guy Delisle's Hostage: Christophe Andre awakens on the first day of his captivity. Drawn and Quarterly hide caption 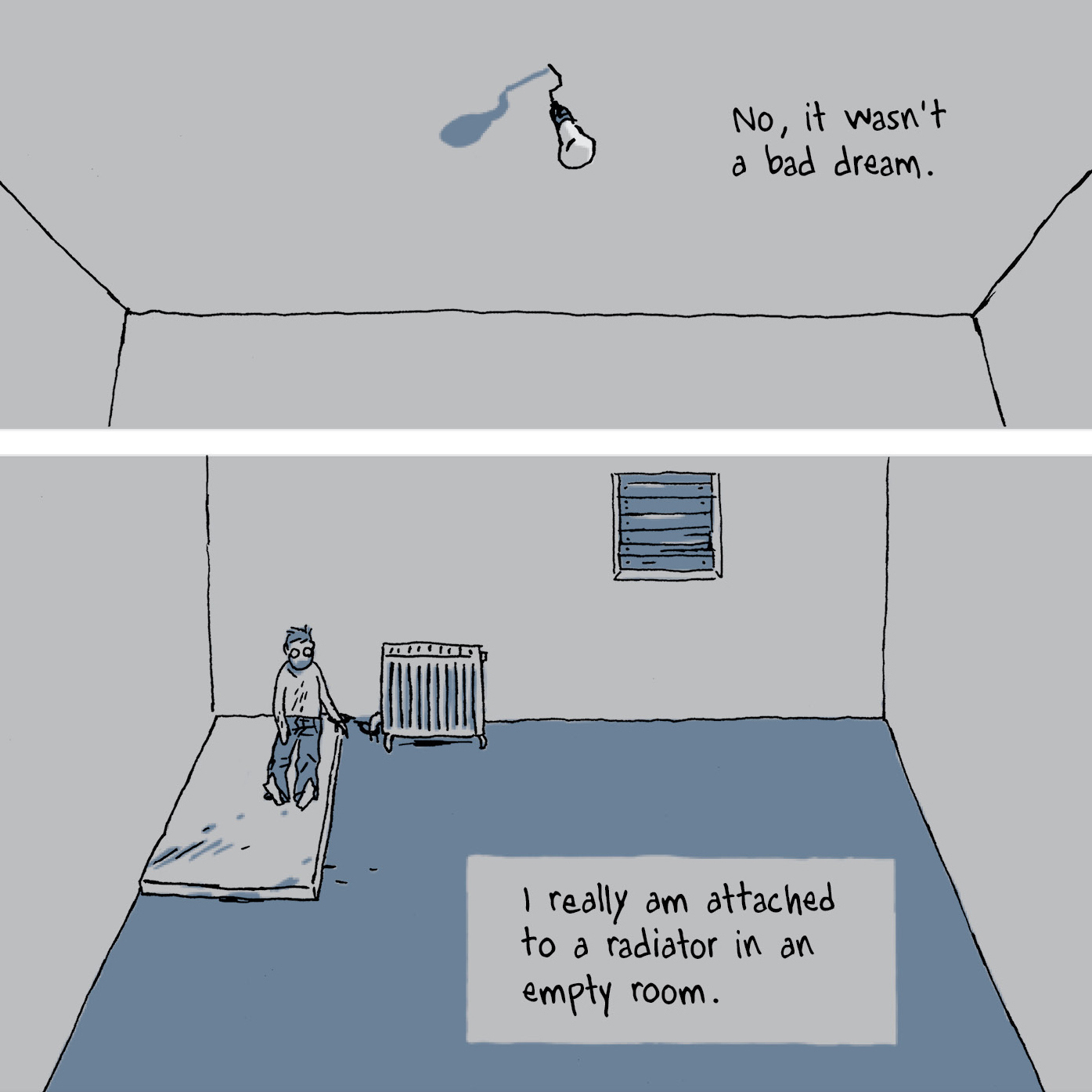 A page from Guy Delisle's Hostage: Christophe Andre awakens on the first day of his captivity.

"It was in the early morning hours of July 2 that I was kidnapped."

On the opening page of Guy Delisle's Hostage, those words hang in a slate-gray night sky, above a building in a nondescript neighborhood of what we soon learn is a small town west of Chechnya. 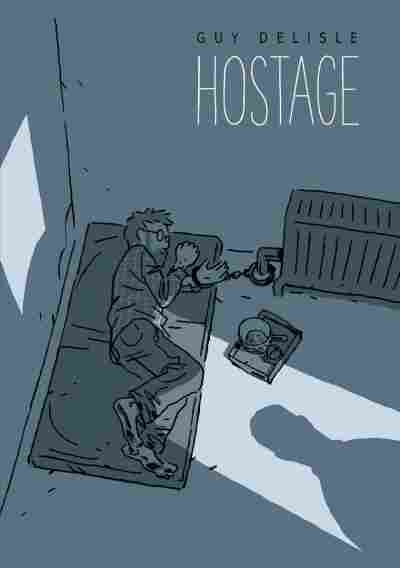 by Guy Delisle and Helge Dascher

That same, muted grayscale color-scheme will stay with us throughout the book, because the man imparting those words — Christophe André, a Doctors Without Borders administrator assigned to the Caucasus region in 1997 — will spend the bulk of Hostage's 432 pages in darkness.

But first, we see a car pull up to the building, and several dark shapes clamber out. We watch them storm into the room where André is sleeping, forcibly abduct the bewildered and terrified man, and shove him into the backseat of a car.

For days that stretch into weeks, and weeks into months, André's existence shrinks to one of numbing monotony, as he is kept — mostly — in a small darkened room, handcuffed to a radiator beside a bare mattress.

His days pass with metronomic regularity: fitful sleep broken up by the "click, clack" of the door, which augurs a meal of thin vegetable soup, or a bathroom break. Any deviation from this crushing routine — the sound of distant gunfire, a new voice in the hallway, or having his photograph taken by his captors — inflames André's imagination with thoughts of rescue, or sends him spiraling into despair. To keep his sanity, he literally counts the passing days (at one point the notion that he's temporarily lost track of which day of the week it is induces a panic attack) and challenges himself to recall details of French military history. 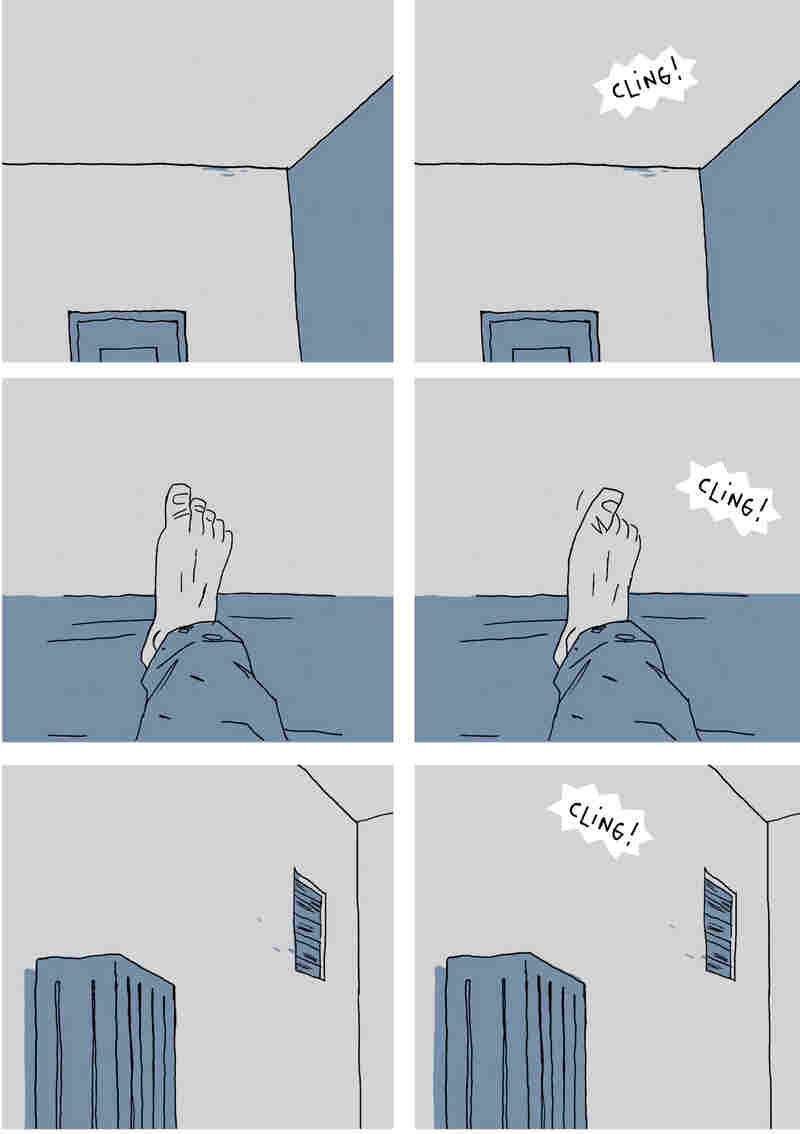 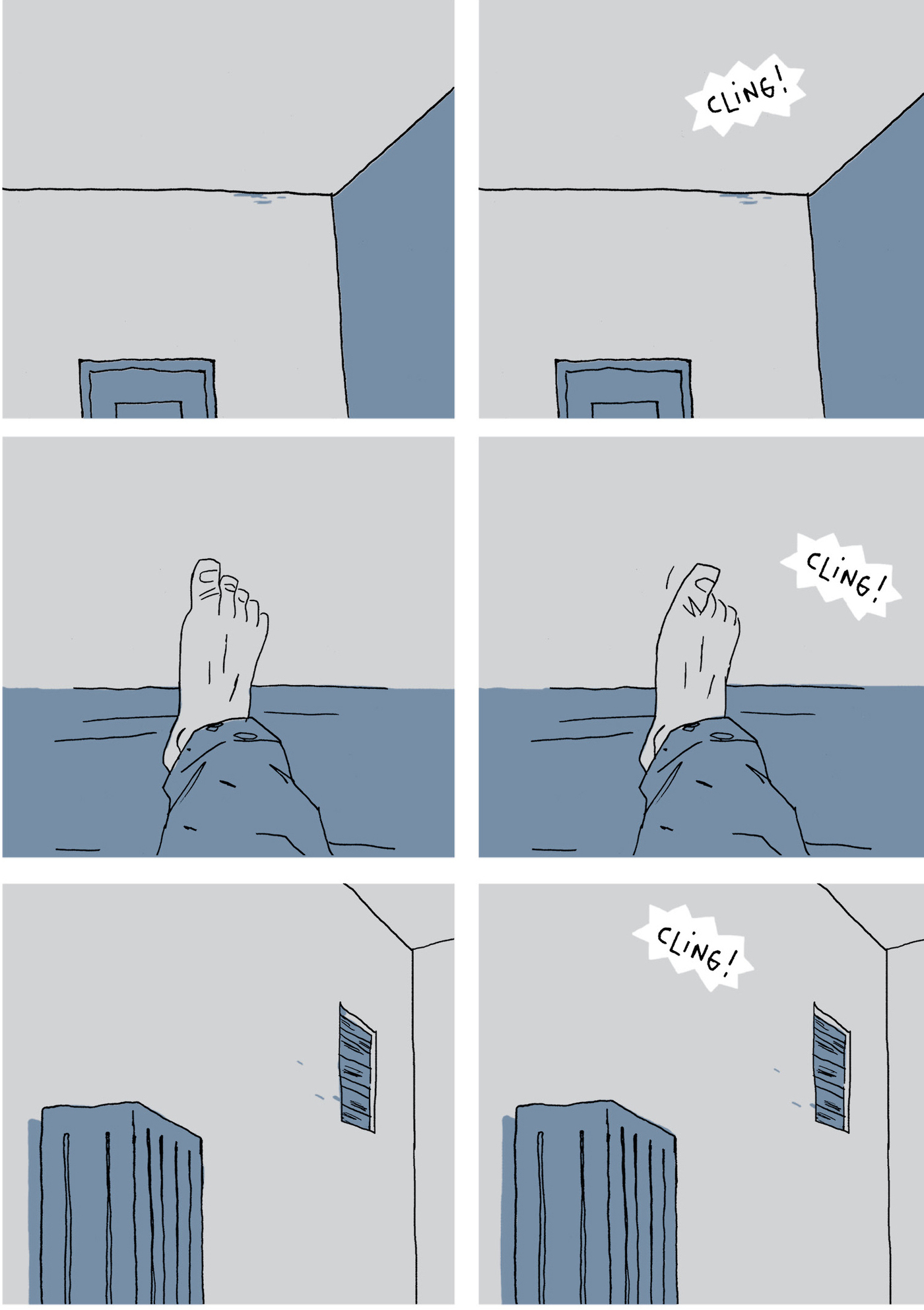 The account of André's experience, dictated to Delisle years later by the man himself, would be powerful enough, if depicted in prose alone. But Hostage is a comic, and it's Delisle's art — his character design, his use of page and panel layout to underscore the mind-numbing sameness of solitary confinement while controlling the story's mood and pacing — that makes us feel André's plight so deeply.

We come to know every square inch of the room — the bare lightbulb never turned on, the stains on the ceiling and walls, the single, boarded-up window — because Delisle lingers over them longingly, again and again, filtered through André's consciousness, which is starved for fresh visual input.

Hostage is a departure from Delisle's previous comics work, a series of first-person travelogues depicting his experiences accompanying his wife — a Doctors Without Borders manager — to places like China, North Korea, Jerusalem and Myanmar. In those books, Delisle brings a sense of humor and an outsider's perspective (he's a stay-at-home dad who generally comes into only glancing contact with the tense political environment on the ground). He depicts himself, and his kids, in a broad, cartoony style that owes more to Hergé's Tintin than the intimate expressiveness of, say, Joe Sacco's graphic nonfiction.

There's a note of that cartoony style here — André wears round glasses over his dot-eyes, and when he's worried about his fate, sweat droplets hover in the air around his temples. But Delisle's in full control, and uses the growing disconnect between André's plight and its occasionally whimsical presentation to point up the power of fleeting flashes of hope: the day his captors add a bit of beef to his soup, the moment he gets to cross the room and actually touch the opposite wall he's been staring at for months.

Hostage concludes with a passage of heightened suspense as André finally gains some measure of control over his fate, only to have his feelings of helplessness and paranoia steadily mount. As readers outside the story, holding the hefty tome that is Hostage in our hands, we know something that André doesn't: that we've only got a handful of pages to go, so one way or another, his tale is about to end. It's a testament to Delisle's gifts that we remain so deeply invested in André's situation, seeing and feeling only what he does, that this knowledge never registers; we keep turning pages fearfully, hungrily, plowing on along with him, vibrating in the tension between word and image, terror and hope. 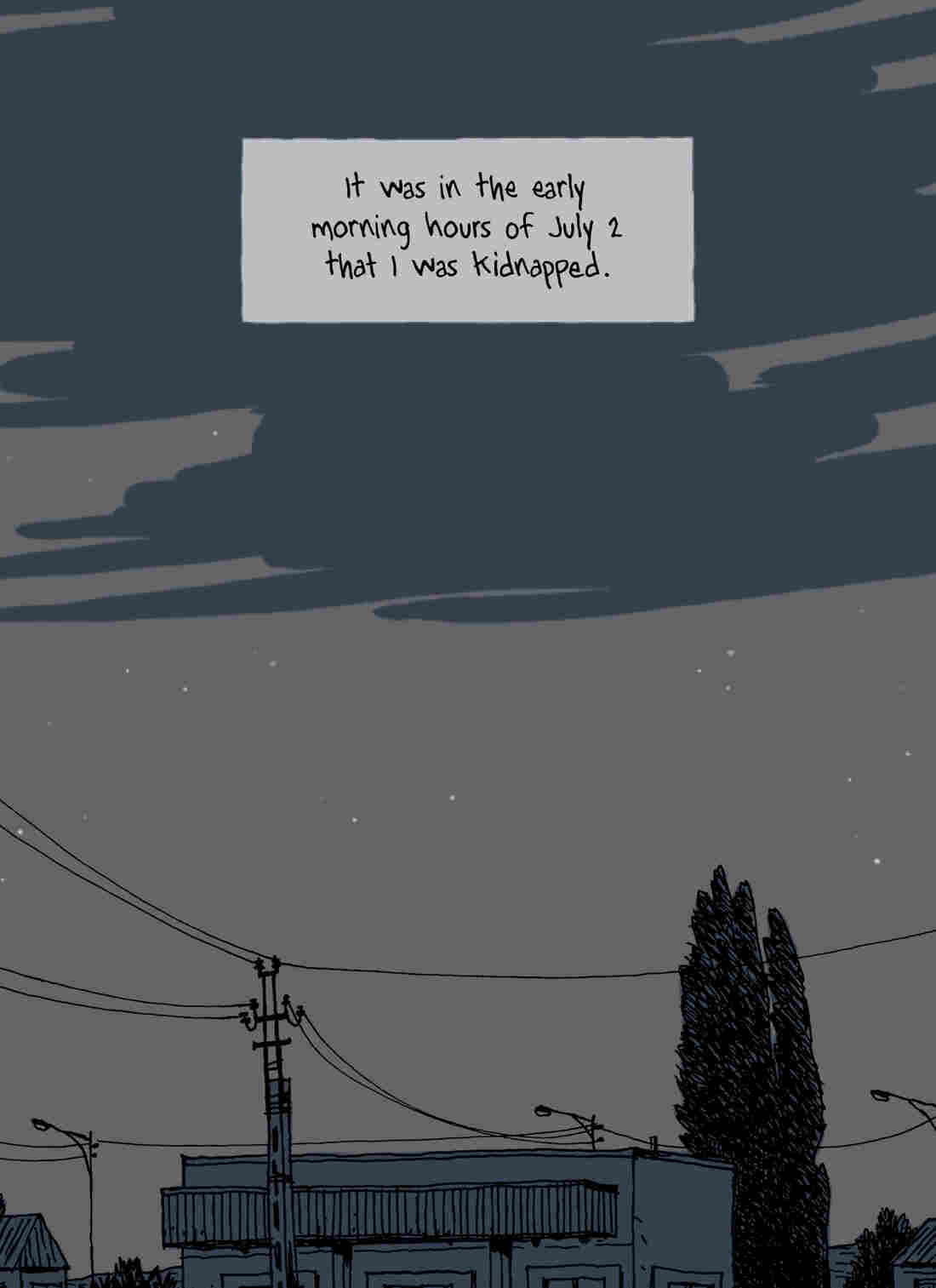 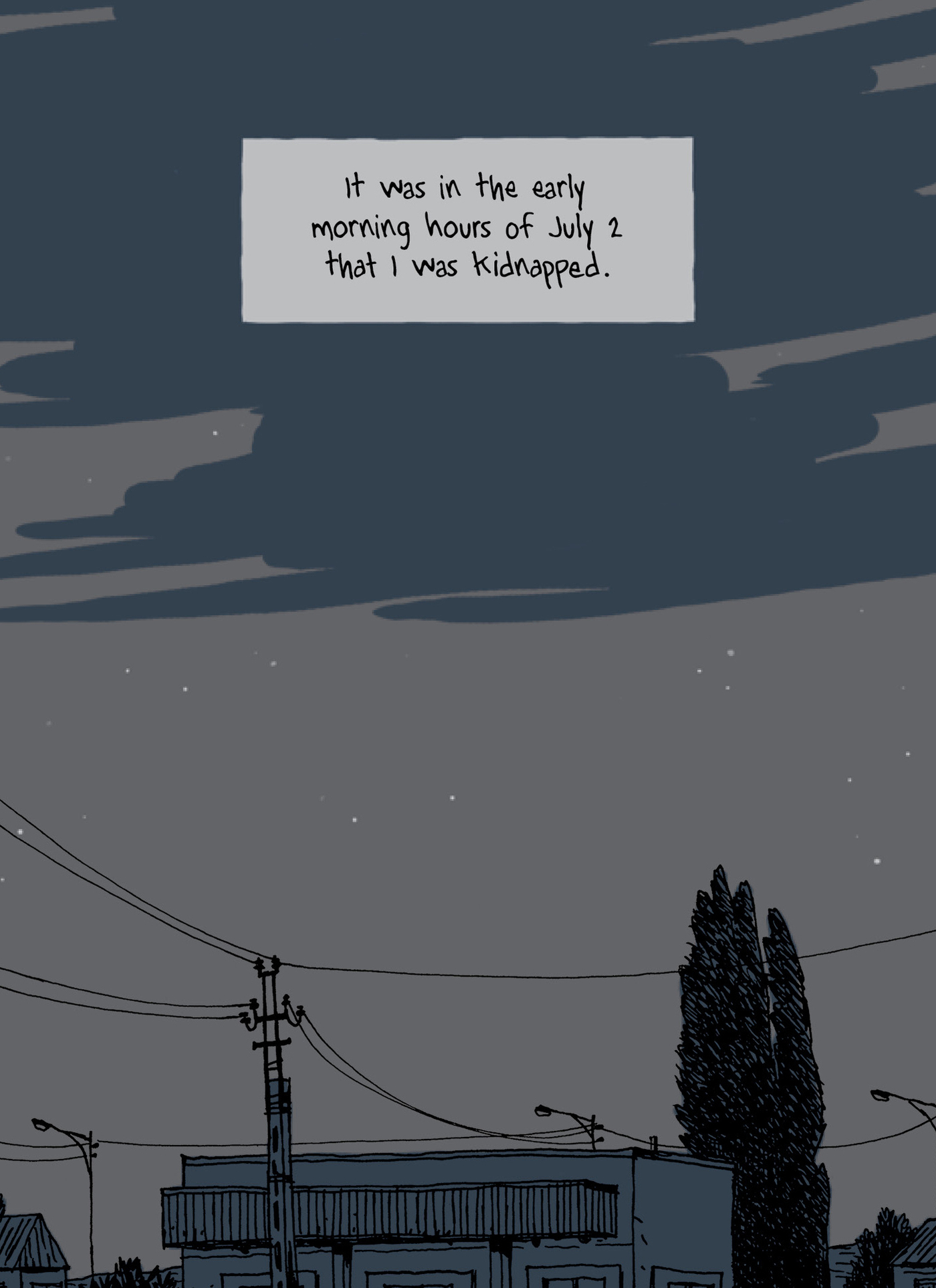