Accessibility links
'Just Show Up': Sheryl Sandberg On How To Help Someone Who's Grieving The Facebook executive lost her husband in 2015. She says, "Rather than offer to do something, it's often better to do anything. Just do something specific." Her new book is called Option B. 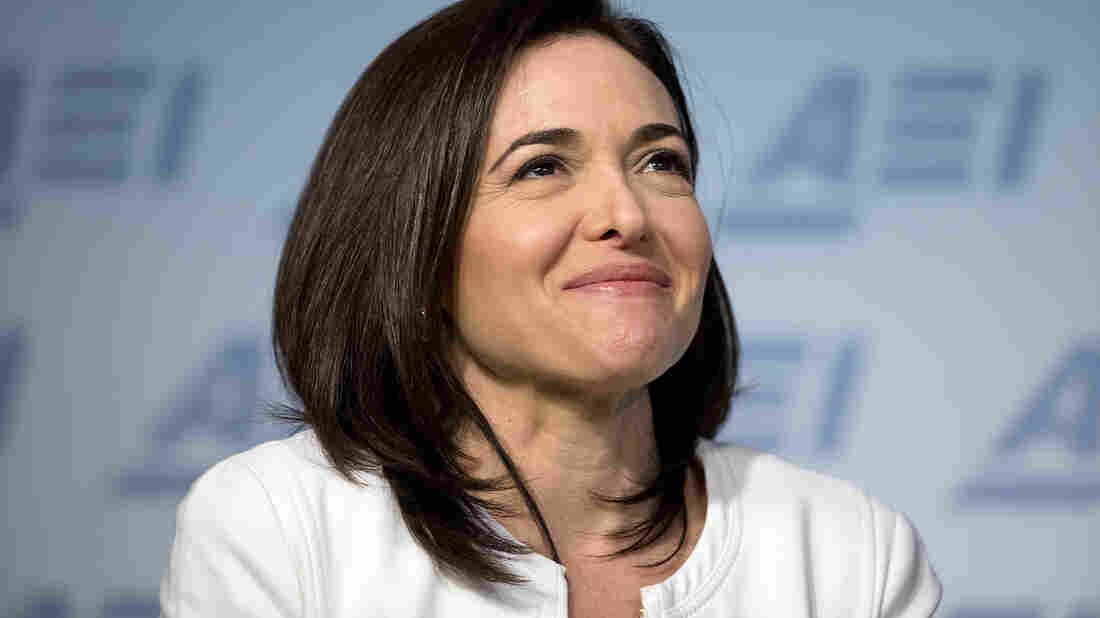 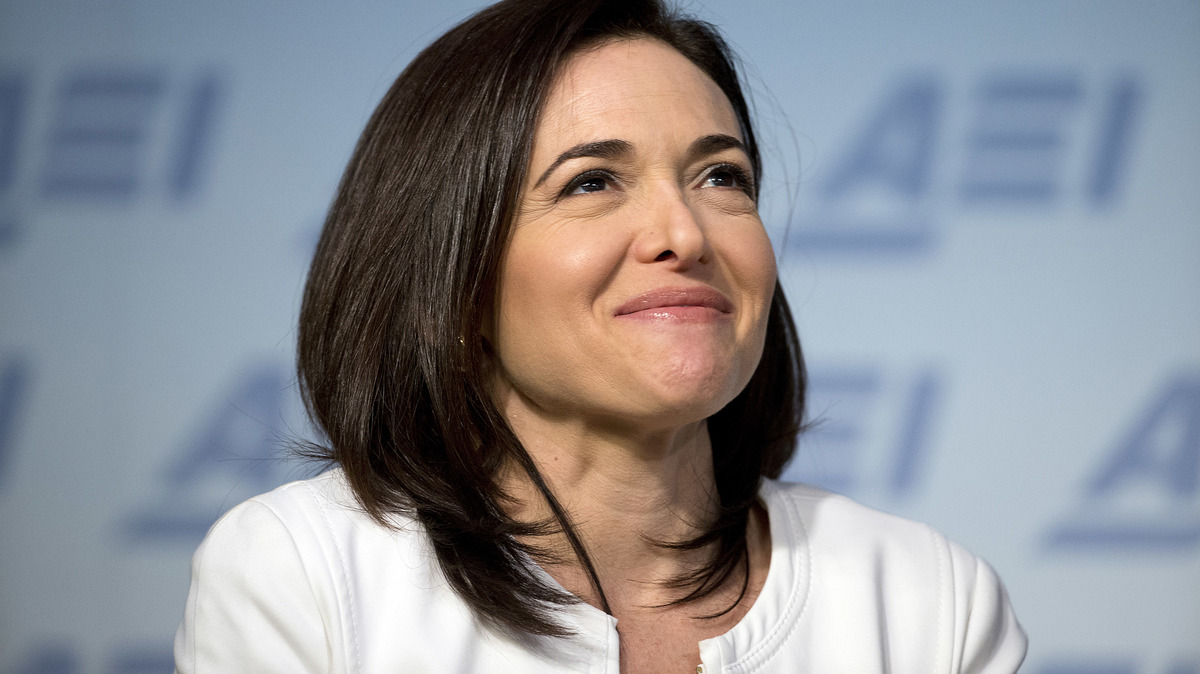 Two years ago, life was good for Sheryl Sandberg. The Facebook senior executive and mother of two had a best-selling book (Lean In: Women, Work and the Will to Lead) and she and her husband, Dave Goldberg, decided to take a vacation. But on that vacation, Goldberg collapsed at the gym from heart failure and died. He was 47 years old.

Sandberg went through a period of darkness after her husband's death. She turned to professionals and friends for help getting through it, and now she's written a book with one of those professionals, psychologist Adam Grant. It's called Option B: Facing Adversity, Building Resilience and Finding Joy. 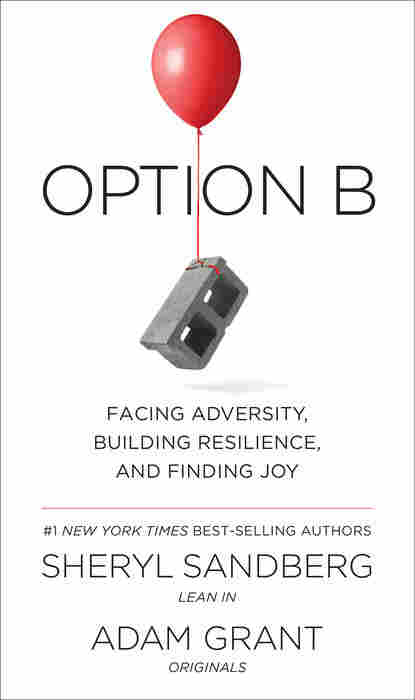 by Sheryl Sandberg and Adam Grant

Sandberg spoke to NPR about finding her way back to normal and the best way to be there for someone who's going through a hard time.

On how the people around her reacted to her loss

My interactions before — I would drop my kids off at school and, you know, the parents and I would all wave to each other; show up at work and everyone would chit chat. A lot of that just stopped and people kind of looked at me like I was a ghost. And I think they were so afraid of saying the wrong thing that they hardly said anything at all.

And it's not just death which does this, it's really all forms of adversity. You want to silence a room? Get diagnosed with cancer. You know, have someone in your family go to prison. Lose a job. Sexual assault. These things are uncomfortable, and because they're uncomfortable people are often afraid of saying the wrong thing and often say nothing at all, and then we have this huge elephant in a room following us around. And one of the reasons I wrote the book and am launching OptionB.org is that the problem with that is that we then don't help each other when we most need that help, and I think that's when we can most come together.

I used to say, when someone was going through something hard, "Is there anything I can do?" And I meant it, I meant it kindly. But the problem is ... that kind of shifts the burden to the person you're offering the help to to figure out what they need. And when I was on the other side of that question, I didn't know how to answer it. Is there anything you can do? Well, can you make Father's Day go away so I don't have to live through it every year? No. 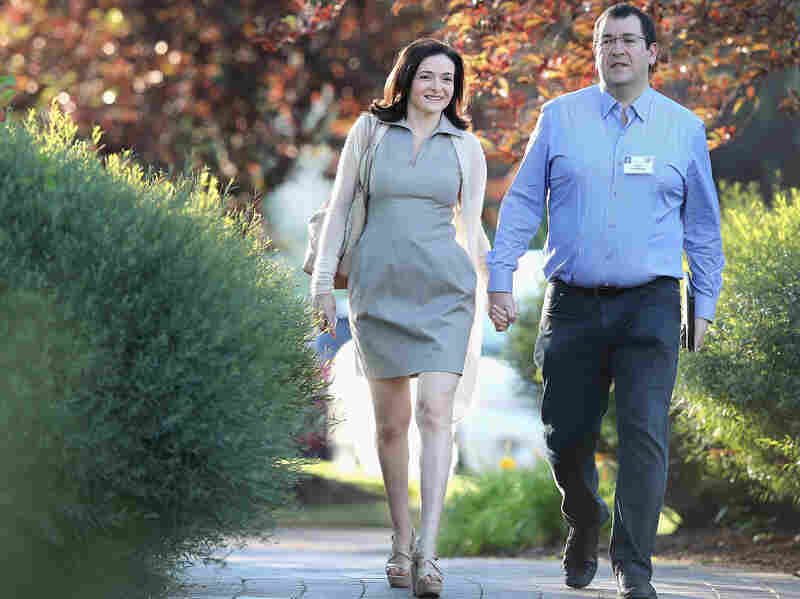 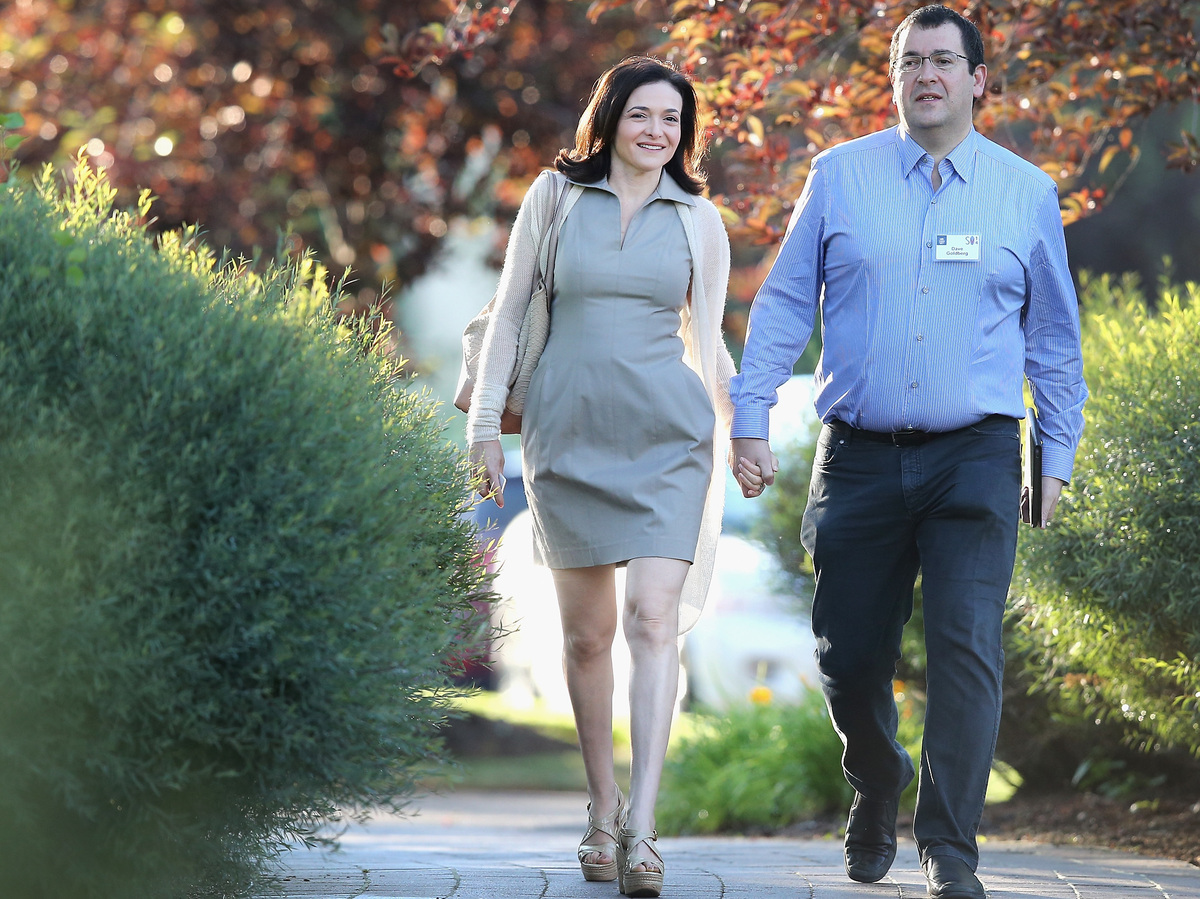 Sandberg and her husband Dave Goldberg, then-CEO of SurveyMonkey, attend a 2014 conference in Sun Valley, Idaho.

Rather than offer to do something, it's often better to do anything. Just do something specific. My wonderful friends ... tragically lost a son and they spent many months in a hospital before that. And one of his friends texted him and said, "What do you not want on a burger?" Not, "Do you want dinner?" Another friend texted and said, "I'm in the lobby of your hospital for an hour for a hug whether you come down or not." Just show up.

Now, there's no one way to grieve and not everyone will want the same thing. So the best approach is really ask people. Say, "I know you're going through something terrible. I'm coming over with dinner tonight. Is that OK?"

On how to build resilience

The most important thing you can do to build resilience is find gratitude. And it's completely counter intuitive, right? I lost my husband and I would have thought that what you want to do in that situation is try to come up with any positive thought you can. But one day [Option B co-author Adam Grant] said to me, "You should think about how things could be worse." And I looked at him like he was crazy. I'm like, "Worse? Well? Are you kidding?" And he said, "Dave could have had that same cardiac arrhythmia driving your children." Right? I mean sock it to the gut. Never occurred to me I could have lost all three. And the second you say that, you're "I'm good. My kids are alive."

'There Is No Good Card For This': What To Say When 'Condolences' Isn't Enough

Always Go To The Funeral

I think in some ways I didn't get it. When I wrote Lean In, I certainly thought about single mothers and single parents, and I wrote about that in the book. But I also titled a whole chapter "Make Your Partner a Real Partner." And it wasn't until I lost Dave that I really understood how hard that could be for someone who didn't have one, the same way Father's Day is so hard for us now. ...

And I posted this last Mother's Day and said I don't think I understood this deeply enough. And I really believe we need to do better. ... Resilience is needed by everyone and hardship is not evenly distributed. People who are living with disadvantage and living in poverty face more to overcome and have fewer resources with which to overcome and we need to change both of those.

On giving herself permission to be happy after her husband died

About four months after Dave died, I went to a friend's child's bar mitzvah and I got on the dance floor with an old high school friend and danced to a song I love. And then a minute in, I just started crying. A lot. On the dance floor. He had to kind of take me outside. And I didn't really know what was wrong, and then I realized I felt OK. For one minute. I danced and felt happy for a minute, and then immediately the guilt just flooded into my body. How can I feel OK when Dave is gone? And what I realized is that it's not just overcoming the grief and it's not just overcoming the isolation; it's giving ourselves permission to feel happy.

Sheryl Sandberg: The Word 'Bossy' Should Be Banned

My brother-in-law, Dave's only sibling, did this for me in such a beautiful way. He called me one day and he was crying, I could hear it in his voice. And he said, "All Dave ever wanted was for you and your children to be happy. Don't take that away from him in death." And it still was hard to let myself laugh, to let myself find joy, but I realized I had to work at it. I had to give myself permission. And I knew I needed to do it because everyone said if I didn't find a way to be happy my kids could never be happy. ...

One of the suggestions Adam made to me is write down three moments of joy before you go to bed. And it's the New Year's resolution I've kept by far the longest. ... The thing about happiness is I think sometimes we're waiting for the big stuff to be happy. ... But happiness isn't always the big things. Happiness is actually the little things, the little moments that make up our day. And in the face of Dave's death, the big thing was not getting better, and it's still not better. So if I wait for that to get better to feel any happiness I'm never gonna feel it.