Accessibility links
Despite Flint Water Crisis, City Is Seeing Signs Of Revitalization Despite its recent water crisis and economic troubles, there is a trend of urban hipness in Flint, Mich.'s small downtown and a partnership to help the city's children. 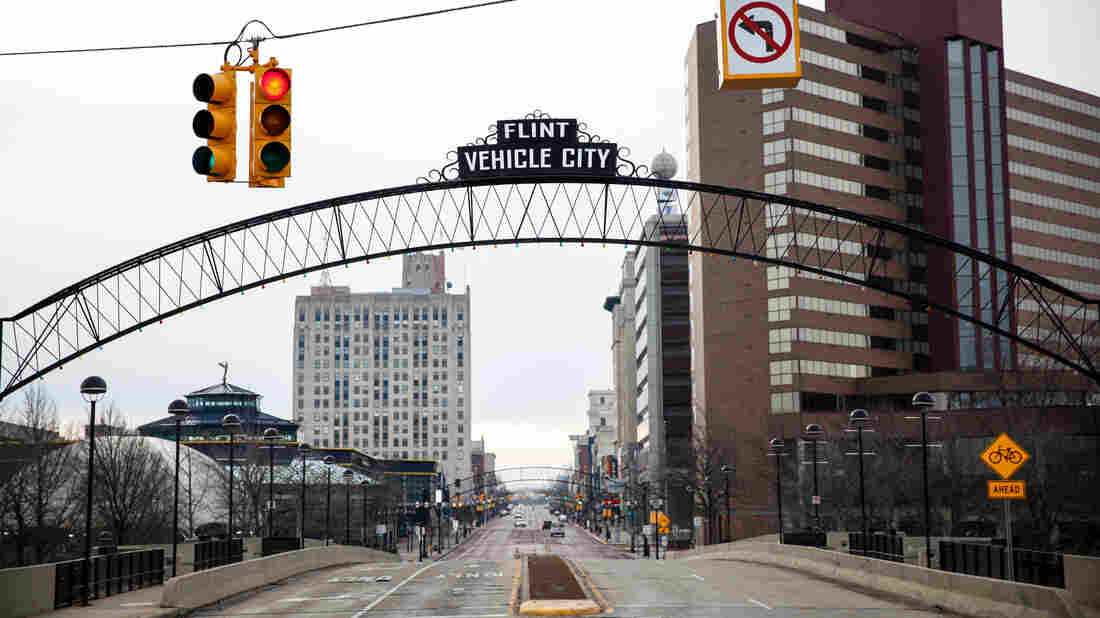 There are coffeehouses and restaurants along Saginaw Street in downtown Flint, Mich. Ten years ago, there were almost none. Sarah Rice/Getty Images hide caption 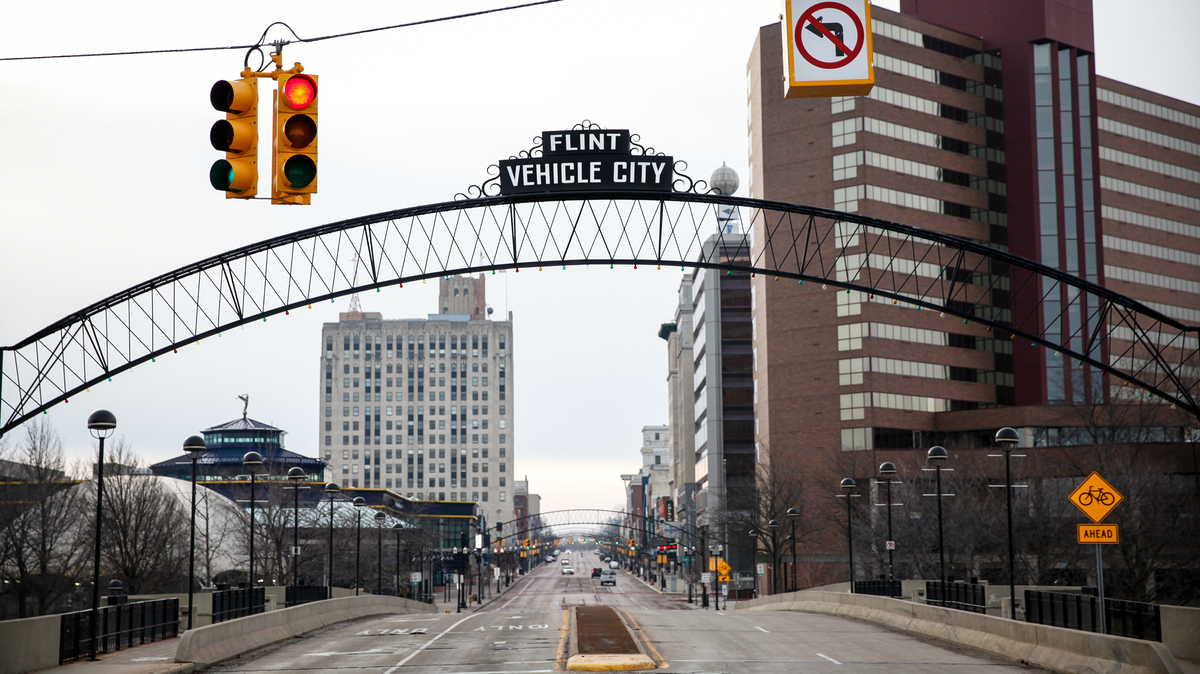 There are coffeehouses and restaurants along Saginaw Street in downtown Flint, Mich. Ten years ago, there were almost none.

It's been a tough three years for an already troubled city. When Flint, Mich., switched to using the Flint River for its drinking water as a cost-saving measure, then failed to properly treat it, lead pipes corroded and contaminated the water with lead.

But Flint residents are fighters, and many are beginning to see signs of hope for a better future.

The most visible are changes are in the city's downtown. There are coffeehouses and restaurants along Saginaw Street where 10 years ago there were almost none.

Flint has a way of making people fall in love with it.

"Almost every night, we have some cool things going on," he said. "We have a jazz night that's really popular; trivia night's always popular."

Laatz says besides the new eateries, philanthropists with ties to the city are restoring the Capitol Theatre to its former glory.

The theatre is next to the renovated, century-old Dryden Building. It used to be a cheap place to rent office space; now, says Laatz, you can't get in.

"Business is thriving," said Soggy Bottom Bar General Manager Ken Laatz. He says he is getting tired of comments and jokes about the city's water crisis, though.

Laatz says Flint residents are happy, but he says the response to the improvements from out-of-towners on social media posts drives him nuts. "It's always the first comment," said Laatz with a grimace. " 'Don't drink the water.' "

Yeah, it gets old. But if you live in Flint you're well aware of its problems.

Most predated the water crisis. General Motors used to employ 80,000 people in Genesee County, most of them in the city. Today, GM has only about 5,000 Flint residents on the payroll.

The catastrophic loss of jobs led to high unemployment and rising crime rates. Flint was already notorious for that earlier crisis, made known to the world by a documentary by Michael Moore called Roger and Me.

Other problems facing the city include low-performing schools and miles and miles of blighted neighborhoods.

But Laatz says improving downtown is a start.

Here's what people outside Flint need to understand, he says: "Flint has a way of making people fall in love with it." He adds, "You know, I love Flint, I love running a business here, I love what it is. And I want all those things to get better, and the education system to be better so that it can be a thriving city again."

The center caters to children up to age 5 who lived in the city during the beginnings of the water crisis. Funding from the state and from foundations ensures that, at least for the next three years, the school is free. 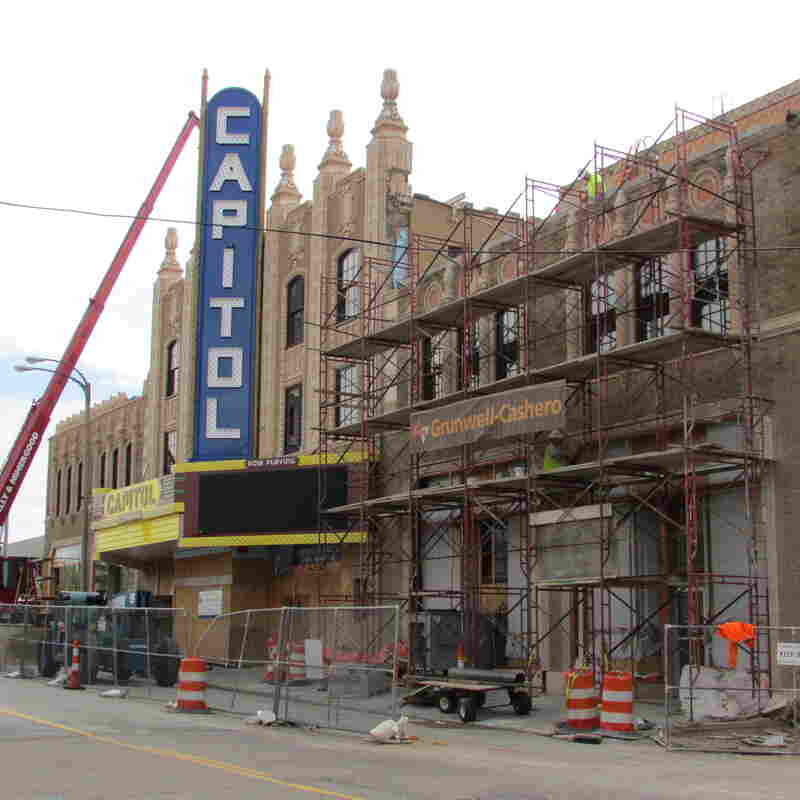 Philanthropists with ties to Flint, Mich., are fixing up the Capitol Theatre. Next door, the century-old Dryden Building has also been renovated. Steve Carmody/Michigan Radio hide caption 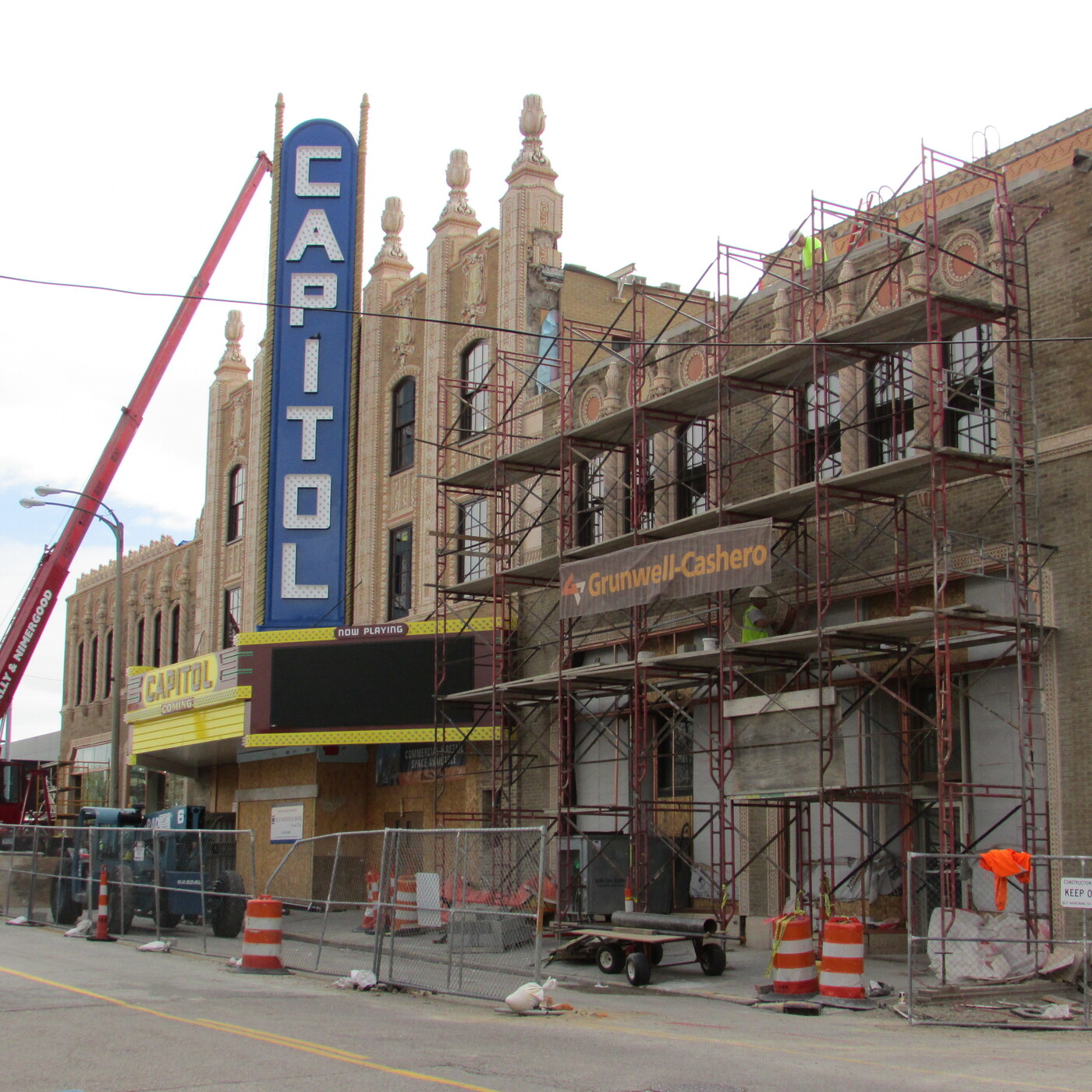 Philanthropists with ties to Flint, Mich., are fixing up the Capitol Theatre. Next door, the century-old Dryden Building has also been renovated.

The school is partnering with the School of Education at the University of Michigan, Flint.

"In order to revitalize a community, you have to revitalize its education system," says School of Education Dean Bob Barnett. "If we want to lift these kids out of poverty, we have to lift whole families up. So we have adult education here, where the parents on site are getting their GED and their high school diploma, while their kids are getting high-quality early childhood care."

The school is based on the Reggio Emilia model developed in Italy after World War II to help cities respond to traumatized kids by providing high-quality early childhood care. Kids in Flint have been traumatized, too, say the school's developers. They figure the model's emphasis on natural materials, soothing and uncluttered classrooms, and respect for the autonomy and ability of the child is a natural fit for Flint's children.

The university will conduct research at the school and remain involved with the children once they enroll in the public district. The aim is to use the experiences here to try to improve Flint's entire public school district from the bottom up.

There are efforts underway to reduce Flint's notorious high crime rate, as well.

Flint's police chief, Timothy Johnson, has his officers focus on traffic stops. Those stops can find people driving without a license, he says, and that can lead to finding unregistered guns in the car.

From the ashes, we can build something brand new. ... We really, truly believe Flint will be a beautiful place one day.

"And believe it not," said Johnson, "When you're taking weapons out of those cars, you're stopping homicides from happening that might have occurred that night."

Johnson says efforts to improve trust between citizens and police are also helping. Crime tips are way up, he says.

"They [citizens] know who's breaking into so-and-so's house," said Johnson. "They know who committed that murder. Somebody was there; somebody saw it. Without those special tips, we would never be able to solve these crimes."

But as with all city services, he says he doesn't have enough police officers or resources.

Economists says Flint does have some anchor businesses that could help, especially if there are more partnerships like the one between the Cummings Center and the University of Michigan, Flint.

Flint has an international airport; it has the university; and it has major medical facilities.

But those assets don't often help people living in the blighted neighborhoods, who lack transportation to jobs, or the skills necessary for jobs.

That's the case for Amy Strange, her husband, and her three kids. She says the development downtown shows that Flint has a vision for its future. Even so, her faith was shaken by the bad decisions and subterfuge that led to the water crisis.

"We started second-guessing who we could trust," said Strange.

It's going to take a long time to get that trust back. But she's still here. She still believes. "You know, it's a cliche, from the ashes, we can build something brand new, and we really, truly believe Flint will be a beautiful place one day."

Check back in another few years, she says. She and many others think there will be even more positive changes in Flint as it works hard to transform itself against some very steep odds.