Accessibility links
Remembering Ella Fitzgerald, Who Made Great Songs Greater On her 100th birthday, Tony Bennett, Cécile McLorin Salvant and others pay tribute to the woman whose voice and vivacity redefined the Great American Songbook. 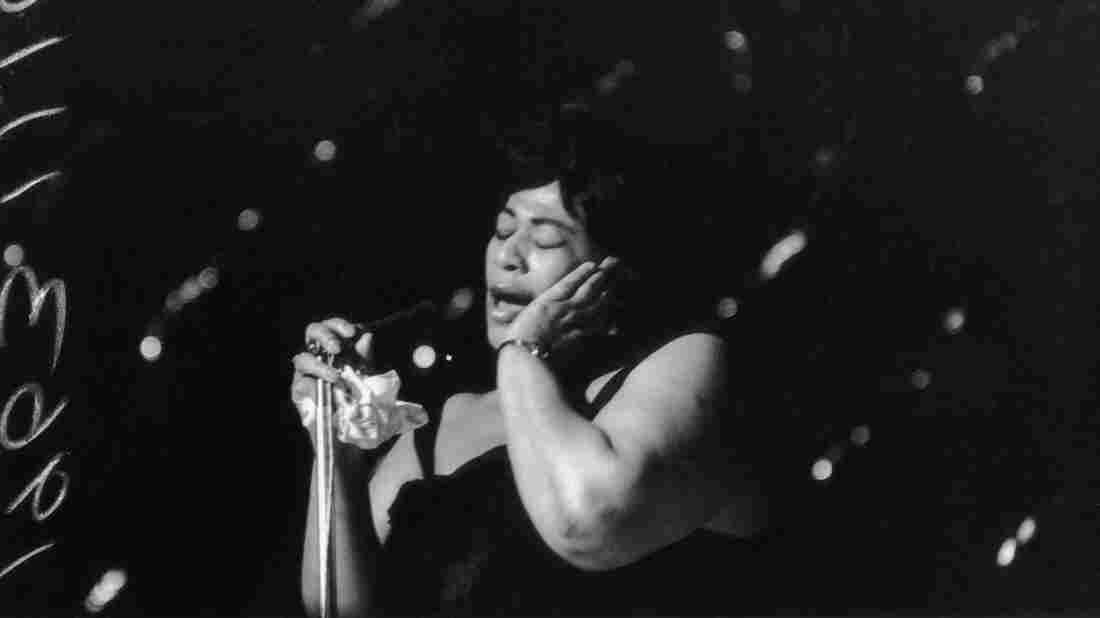 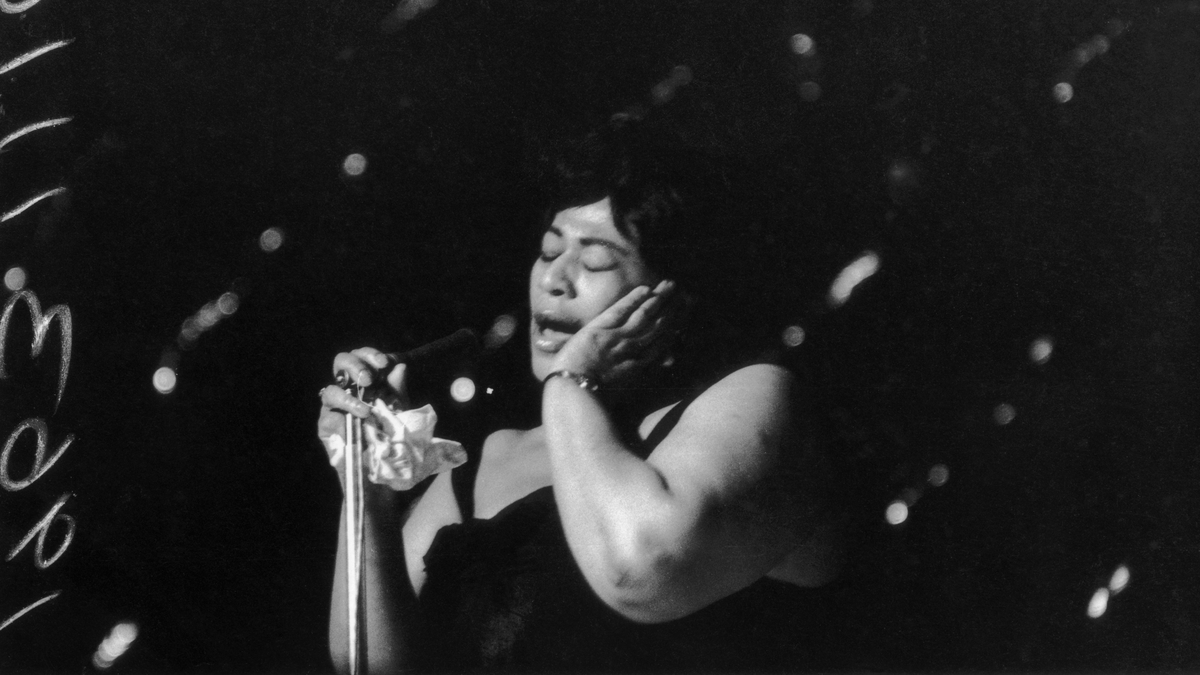 Ella Fitzgerald singing at the Hammersmith Odeon in 1963.

Ella Fitzgerald, who would have turned 100 Tuesday, was one of the most beloved and versatile singers of the 20th century. In a career that spanned six decades, Fitzgerald recorded hundreds of songs, including definitive versions of many standards. Along the way, she influenced generations of singers.

But the first thing that strikes you about Fitzgerald is that voice.

Cécile McLorin Salvant, who won a Grammy last year for Best Jazz Vocal Album, says a combination of qualities made Fitzgerald's voice unique. "When you hear the tone of her voice — which has kind of a brightness, kind of a breathiness, but it also has this really great depth, and kind of a laser-like, really clear quality to it — it hits you," she says.

Salvant, 27, says she learned to sing jazz standards by listening to Fitzgerald's versions.

"I remember being 17 and living in France and feeling really homesick and wanting to go back to Miami, and listening to Ella Fitzgerald singing 'I Didn't Know What Time It Was,' " Salvant says. "And I would listen to that all day. All day. For, like, weeks. And it felt — it created a home for me."

Fitzgerald had perfect pitch, impeccable diction and a remarkable sense of rhythm. And it all came naturally to her, as she told the CBC in 1974.

"What I sing is only what I feel," she said. "I had some lady ask me the other day about music lessons and I never — except for what I had to learn for my half-credit in school — I've never given it a thought. I've never taken breathing lessons. I had to go for myself, and I guess that's how I got a style."

That style was an immediate hit. Fitzgerald was discovered at an amateur contest and began her professional career when she was only 16, singing with the Chick Webb Orchestra at Harlem's Savoy Ballroom. When she was 21, she became internationally famous with a hit record based on a nursery rhyme, "A-Tisket, A-Tasket."

Tony Bennett says that when he was starting out as a young singer, Ella Fitzgerald was his idol. "She was a complete swinger," he says. "She just understood the whole art of jazz phrasing."

Bennett is now 90 years old, and Fitzgerald is still his idol. (A portrait he painted of her is even in the Smithsonian National Museum of American History's collections.) He says she was the quintessential performer.

"She loved performing. She loved it. And the audience knew it right away," Bennett says. "The minute she walked out on that stage, they knew she was ready to give them the best she could ever imagine for them. She couldn't wait to get on that stage and hit the back of the house, and have them react to her right away."

In the 1940s, Fitzgerald took part in late-night Harlem jam sessions with trumpeter Dizzy Gillespie. Those sessions would give rise to bebop — and Fitzgerald embraced bebop scat singing, using her voice like a horn.

"She knew how to improvise better than anybody I ever listened to," Bennett says. "Just like an instrumentalist would take a jazz solo, she would do that vocally, and it would be perfection."

Fitzgerald toured and recorded constantly, producing one hit record after another. Music publishers wanted her to be the first to record their new songs, and she became known as "The First Lady of Song." In the 1950s, she embarked on an ambitious recording project: eight albums of standards written by prominent American composers — including Cole Porter, Irving Berlin, Duke Ellington, Jerome Kern and George and Ira Gershwin. 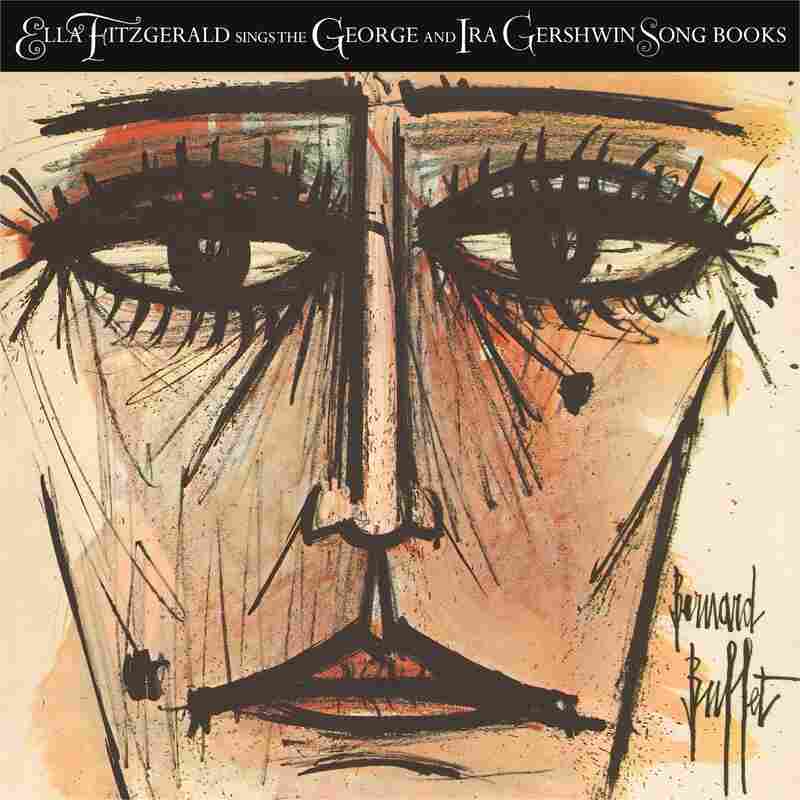 Ella Fitzgerald Sings The George And Ira Gershwin Songbook is being reissued this year for the first time since its original release. Courtesy of Verve hide caption

Many of Fitzgerald's recordings of the musical canon known as the Great American Songbook are considered definitive versions. Ira Gershwin once said, "I never knew how good our songs were until I heard Ella Fitzgerald sing them."

Dan Morgenstern, Director Emeritus of the Rutgers Institute of Jazz Studies, says this is what she'll be remembered for.

"She could take a great song and make it even greater," Morgenstern says. "She had a wonderful sense of melody. She had that beautiful voice. She had that perfect intonation. And she always knew what the right tempo should be. And she put so much feeling into what she did."

Fitzgerald lived for her career — and her personal life suffered. She fell in love with good-looking younger men who turned out to be scam artists. Her marriage to bebop bassist Ray Brown lasted only six years. She was insecure, got nervous before performances and cried if she got a bad review. And she was overweight for much of her life.

"She was not a sex symbol," Salvant says. "And yet she was very successful. It's a testament to both the audience and — of course, most of all — her artistry. And we're not even talking about racism. That a black woman could be so popular across the board with both black and white audiences — that's a beautiful thing."

Ella Fitzgerald sold 40 million records in her lifetime. She died in 1996 from complications caused by diabetes. She was 79 years old.

Hear Some Of Ella's Best

For Ella Fitzgerald's centennial, the Verve Label Group is reissuing much of her music, including a compilation called '100 Songs For A Centennial.' The label has also curated this playlist of some of Fitzgerald's best work.