Accessibility links
When LA Erupted In Anger: A Look Back At The Rodney King Riots This week 25 years ago, policemen were acquitted in the savage beating of African-American Rodney King. Five days of riots, arson and looting ensued, fueled by deep-rooted tensions that persist today. 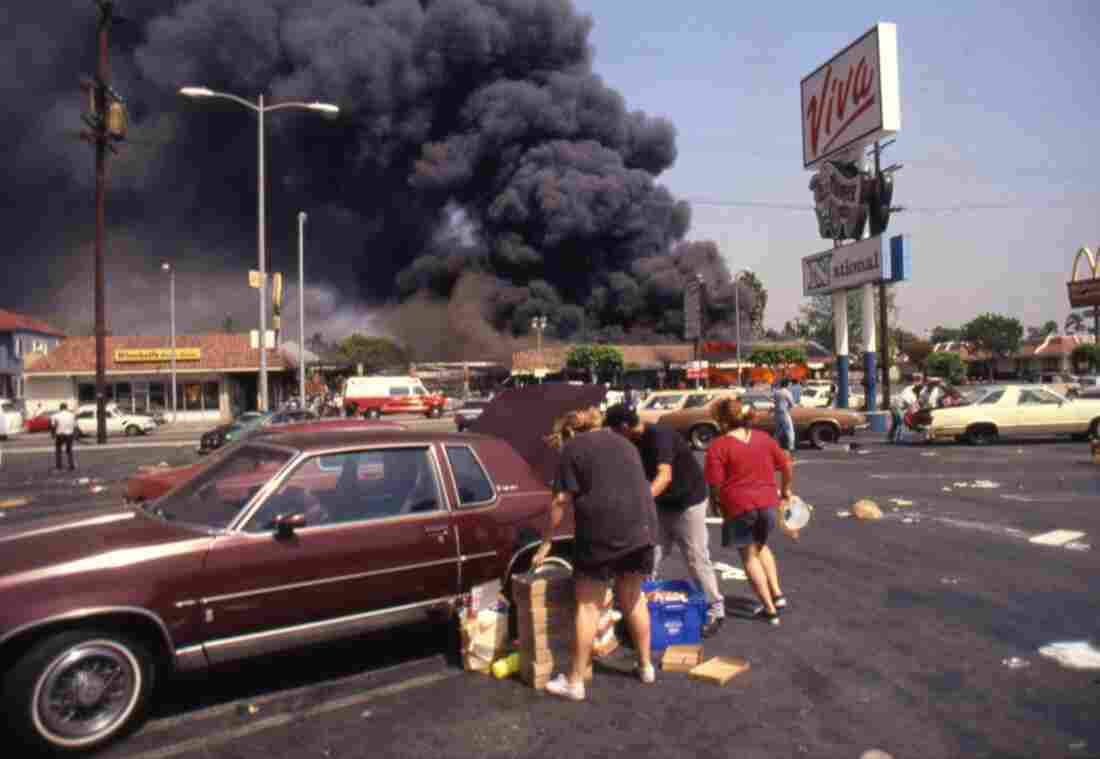 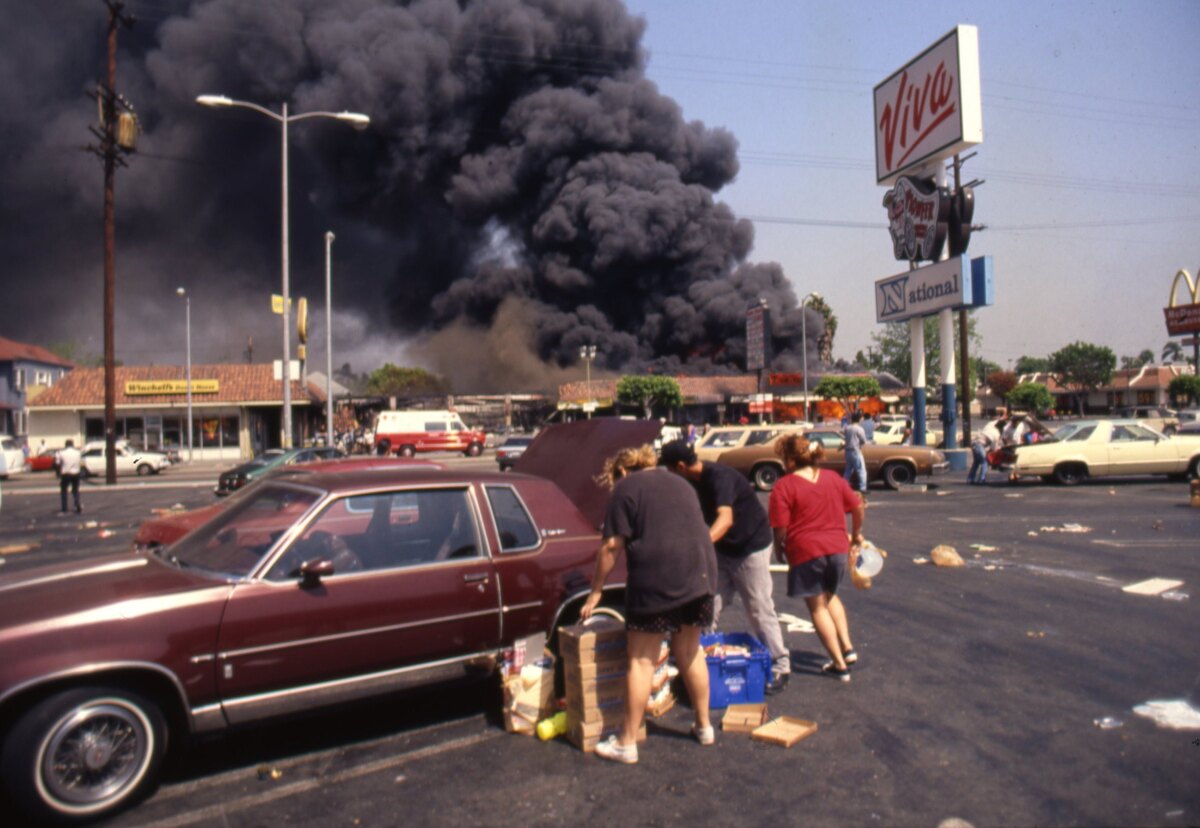 Looters load up a car at the Viva shopping center near a billowing fire during the rioting that erupted in Los Angeles on April 29, 1992, after a jury found four Los Angeles Police Department officers not guilty in the beating of Rodney King.

Twenty-five years ago this week, four Los Angeles policemen — three of them white — were acquitted of the savage beating of Rodney King, an African-American man. Caught on camera by a bystander, graphic video of the attack was broadcast into homes across the nation and worldwide. 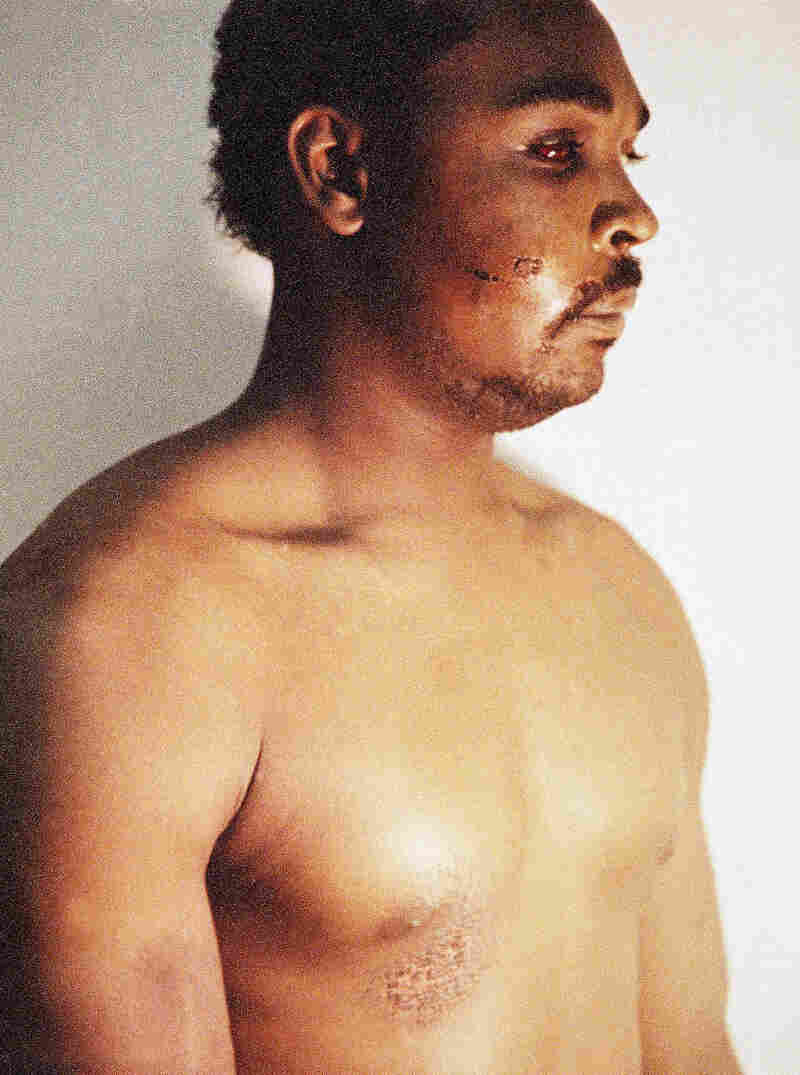 This photo of Rodney King was taken on March 6, 1991, three days after police officers beat him savagely. The photo is one of three introduced into evidence by the prosecution in the trial of four LAPD officers in a Simi Valley, Calif., courtroom in 1992. AP hide caption

Fury over the acquittal — stoked by years of racial and economic inequality in the city — spilled over into the streets, resulting in five days of rioting in Los Angeles. It ignited a national conversation about racial and economic disparity and police use of force that continues today.

"When the verdict came out, it was a stunner for people coast to coast. My jaw dropped," says Jody David Armour, a criminal justice and law professor at the University of Southern California.

"There was ocular proof of what happened. It seemed compelling," he says of the videotape. "And yet, we saw a verdict that told us we couldn't trust our lying eyes. That what we thought was open and shut was really 'a reasonable expression of police control' toward a black motorist."

A year earlier, in March 1991, King — who was on parole for robbery — had led police on a high-speed chase through Los Angeles; later, he was charged with driving under the influence.

When police finally stopped him, King was ordered out of the car. Los Angeles Police Department officers then kicked him repeatedly and beat him with batons for a reported 15 minutes. The video showed that more than a dozen cops stood by, watching and commenting on the beating.

Ultimately, four officers were charged with excessive use of force. A year later, on April 29, 1992, a jury consisting of 12 residents from the distant suburbs of Ventura County — nine white, one Latino, one biracial, one Asian — found the four officers not guilty.

The acquittals were announced around 3 p.m.; less than three hours later, the unrest began.

Residents set fires, looted and destroyed liquor stores, grocery stores, retail shops and fast food restaurants. Light-skinned motorists — both white and Latino — were targeted; some were pulled out of their cars and beaten. 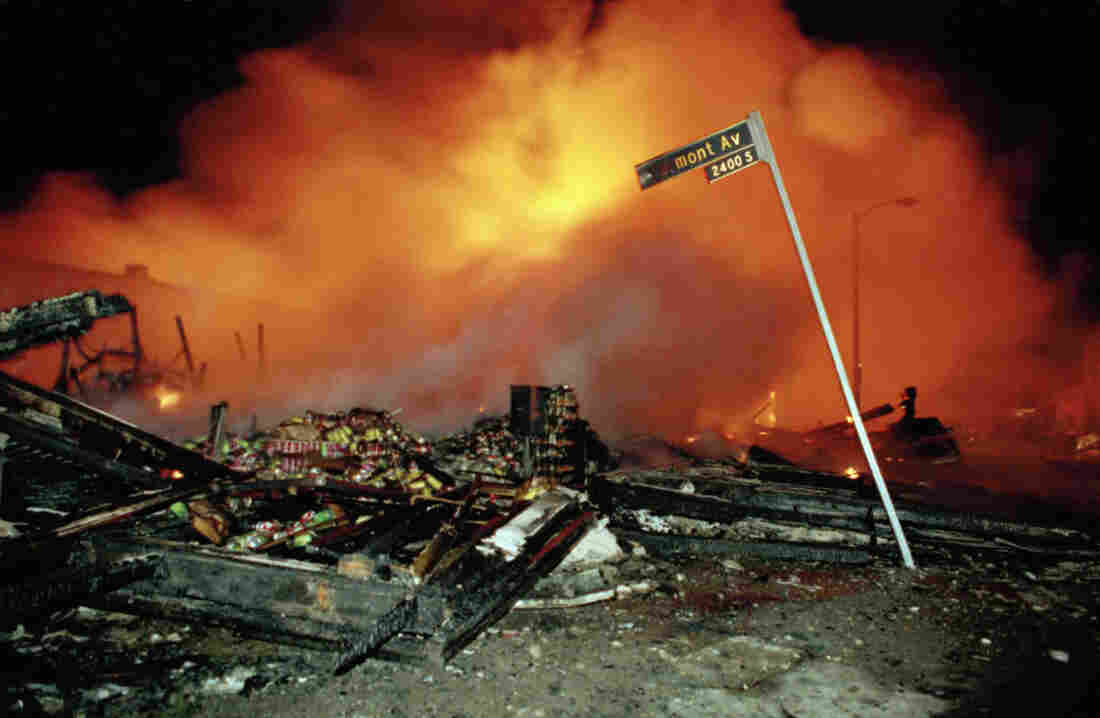 The remains of a commercial building smoulders as another building burns out of control behind the smoke in Los Angeles early on the morning of April 30, 1992. Douglas C. Pizac/AP hide caption

The reaction to the acquittal in South Central Los Angeles — now known just as South Los Angeles — was particularly violent. At the time, more than half of the population there was black. Tension had already been mounting in the neighborhood in the years leading up to the riots: the unemployment rate was about 50 percent, a drug epidemic was ravaging the area, and gang activity and violent crime were high.

Another contributing factor: The same month as Rodney King's beating, a Korean store owner in South Los Angeles shot and killed a 15-year-old African-American girl named Latasha Harlins, who was accused of trying to steal orange juice. It was later discovered Harlins was clutching money to pay for the juice when she was killed. The store owner received probation and a $500 fine.

The incident heightened tensions between Koreans and African-Americans, and intensified the black community's frustration with the criminal justice system.

At the same time, the community's anger was also deepening against Los Angeles police. African-Americans said they did not feel protected during times of need, but instead reported being harassed without cause. 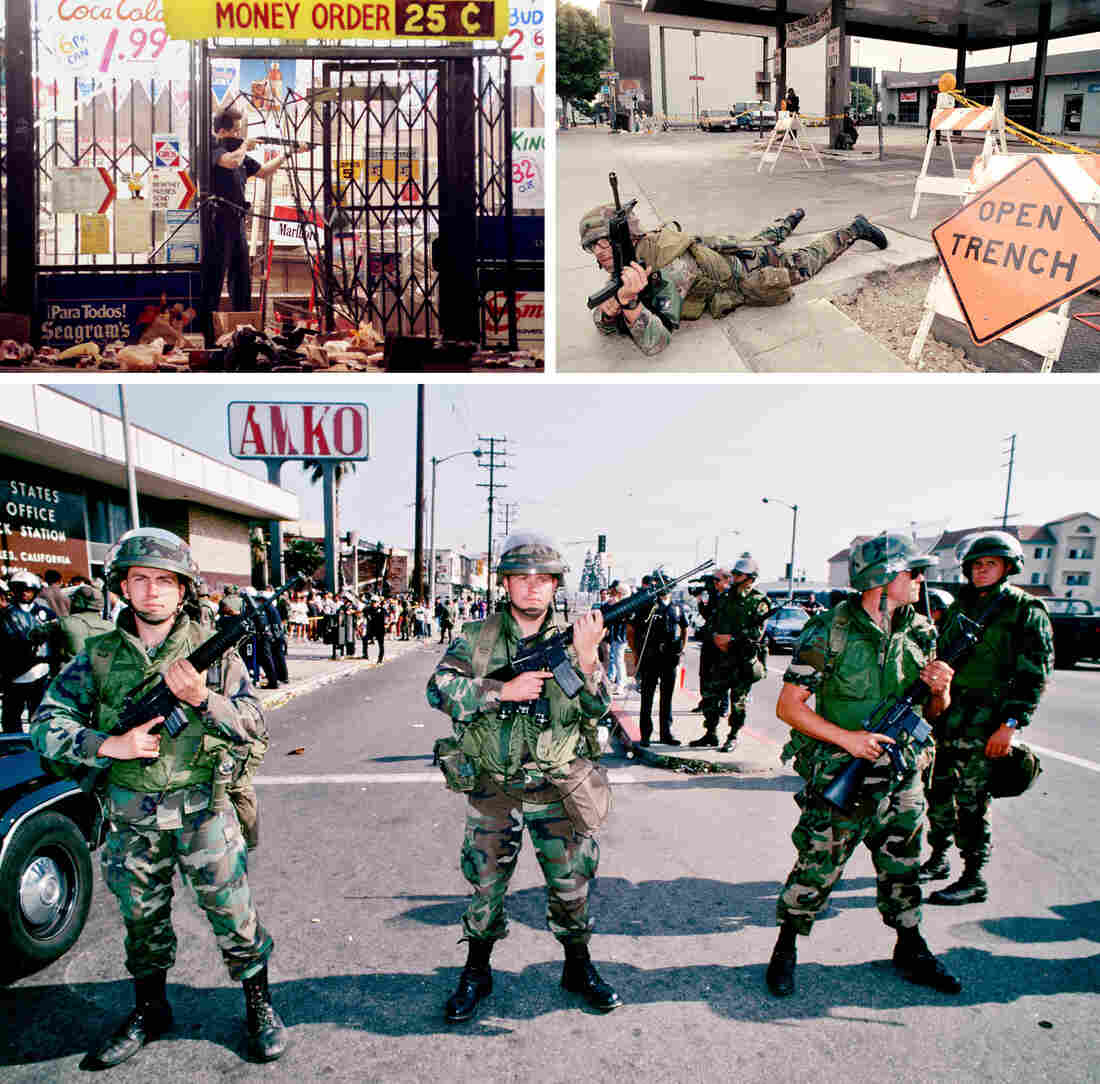 Police flooded the streets on April 30 as riots continued. An LAPD officer (left) takes aim at a looter in a market at Alvarado and Beverly Boulevard. A National Guardsman (right) at a gas station near Vermont Avenue and Wilshire Boulevard. Armed National Guard soldiers (bottom) hold a line at a post office in South Central after the post office suspended mail delivery due to rioting. John Gaps III, David Longstreath/AP; Ted Soqui/Corbis via Getty Images hide caption

The LAPD at the time was almost an occupying force, particularly biased against people of color, says lawyer and civil rights activist Connie Rice.

"It was an open campaign to suppress and contain the black community," she says. "LAPD didn't even feel it was necessary to distinguish between pruning out a suspected criminal where they had probable cause to stop and just stopping African-American judges and senators and prominent athletes and celebrities simply because they were driving nice cars."

The riots first began at an intersection in South Los Angeles — Florence and Normandie — according to news reports and firsthand accounts in the last 25 years.

From The Archives: NPR Reports From The Epicenter Of The Riots 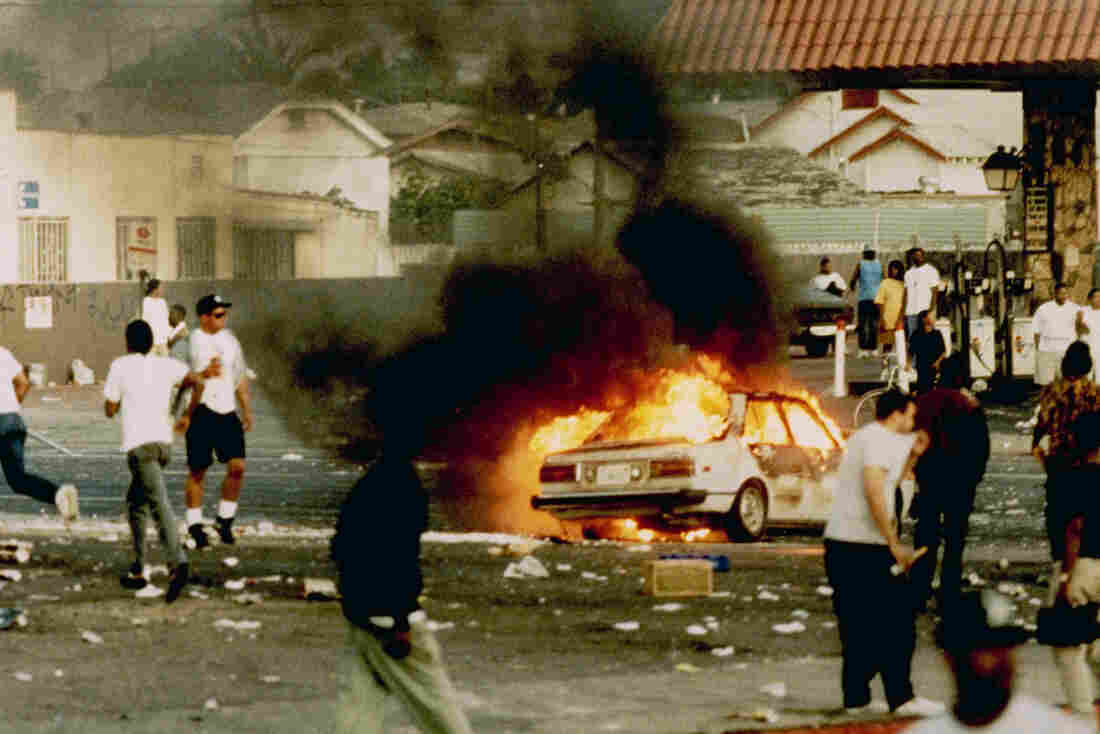 A car burns as looters take to the streets at the intersection of Florence and Normandie avenues — considered the flashpoint of the LA riots — on April 29, 1992. Steve Grayson/WireImage/Getty Images hide caption

Bystander Terri Barnett was at Florence and Normandie that first night and remembers watching the cops drive right by rioters without stopping.

She and her boyfriend — along with two other strangers, all African-American — helped rescue a white truck driver named Reginald Denny, who was beaten viciously by gang members who were rioting and had pulled Denny out of his truck at about 6:45 p.m. Barnett, her boyfriend and the two strangers shoved Denny back into his truck and drove him to the hospital, which saved his life.

"There were four cops in each car that passed by," Barnett told NPR in 1992. "They saw us. They looked right through us."

When 911 calls about the violence started coming in, police were not deployed immediately. Though LAPD Chief Darryl Gates announced early in the afternoon of April 29 that his officers had the situation under control, it would later be reported that the city was not adequately prepared for the riots. In fact, there was no anticipation of — or official plan at the department for — major social unrest on this scale.

From The Archives: NPR Reports On Looting 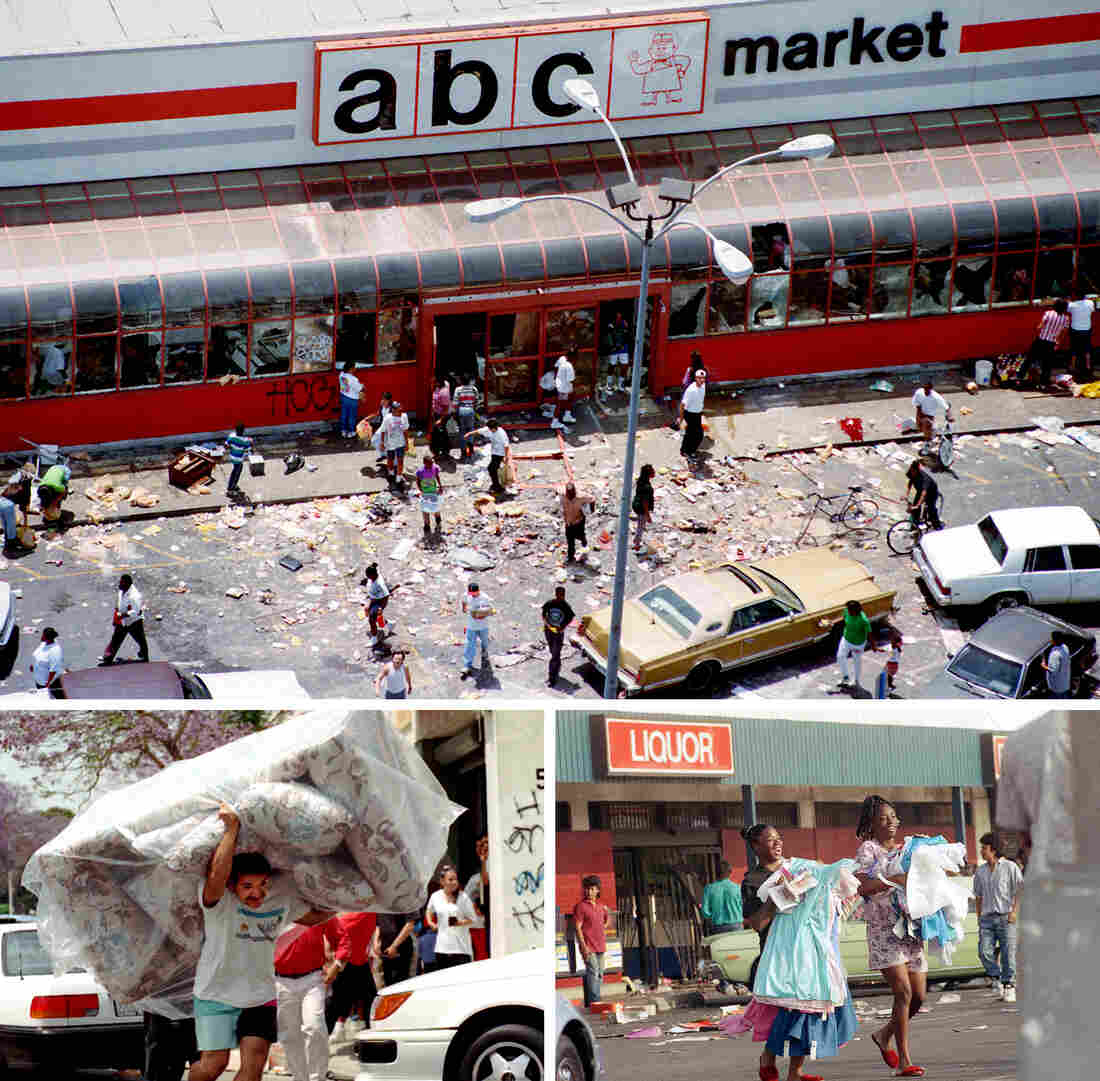 Looters mill in the parking lot of the ABC Market (top) in South Central Los Angeles on April 30, 1992. Some looted furniture (bottom left) from stores in the area, while others took clothing from shopping center at the corner of Western Boulevard and 18th Street (bottom right) after firefighters and police left the scene. Paul Sakuma, Nick Ut, Kevork Djansezian/AP hide caption

"One of the most astounding things about the 1992 Los Angeles riots was the response of the LAPD, which is to say no response at all," says author Joe Domanick, who has studied and written about the riots, in an interview with Grigsby Bates.

That night, Gates went to speak at a fundraiser in West Los Angeles and reportedly ordered cops to retreat. Police did not respond to incidents of looting and violence around the city until almost three hours after the original rioting broke out.

For the rest of the night, the scene at Florence and Normandie repeated itself with rioters across the city. Just before 9 p.m. that night, Mayor Tom Bradley called for a state of emergency, and California Gov. Pete Wilson ordered 2,000 National Guard troops to report to the city.

On May 1, the third day of the riots, Rodney King himself attempted to publicly appeal to Los Angeles residents to stop fighting. He stood outside a Beverly Hills courthouse with his lawyer and asked "People, I just want to say, you know, can we all get along? Can we get along?"

During the five days of unrest, there were more than 50 riot-related deaths — including 10 people who were shot and killed by LAPD officers and National Guardsmen. More than 2,000 people were injured, and nearly 6,000 alleged looters and arsonists were arrested. 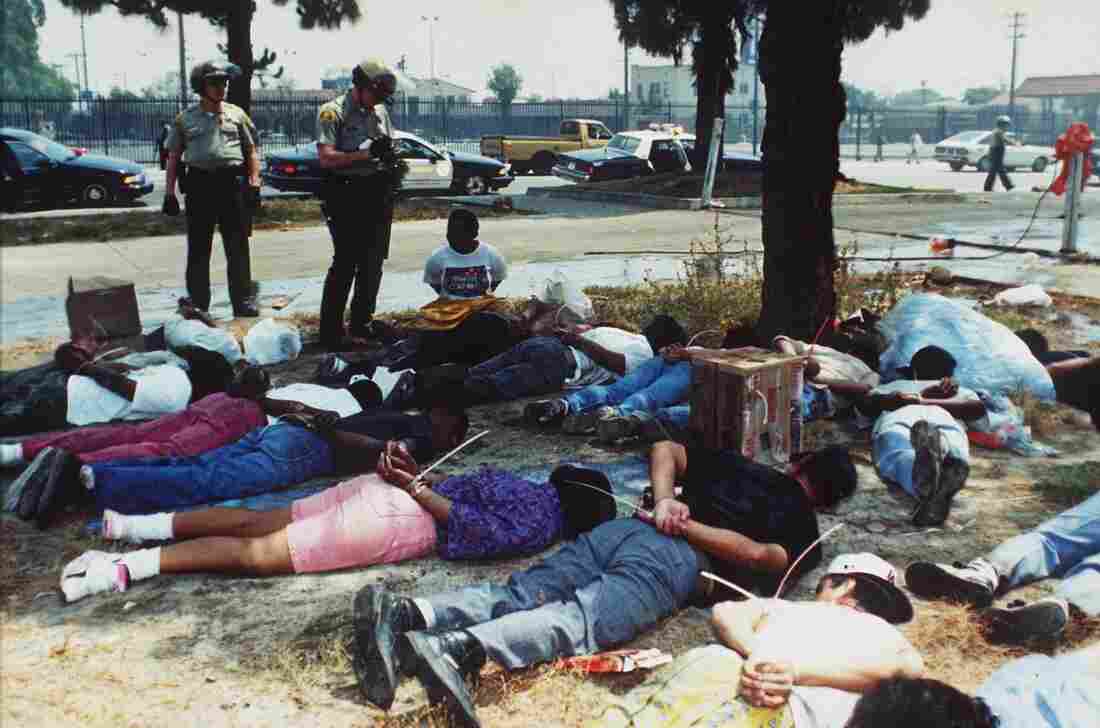 Police stand over a group of handcuffed looting suspects in Los Angeles on April 30, 1992, as rioting continued throughout the area. Nick Ut/AP hide caption

Of those arrested during the riots, 36 percent were African-Americans and 51 percent were Latinos, according to the Rand Corp.

The riots also disrupted daily life: A city curfew from sunset to sunrise was announced, mail delivery stopped, and most residents couldn't go to work and school.

The city curfew was ultimately lifted on the morning of May 4. Most schools, banks and businesses were allowed to reopen.

Slowly, residents returned to their everyday routines. But the Rodney King beating and the Los Angeles riots exploded out of social issues that still have not been resolved. That shocking, grainy video of his beating would be just the first of a long line of police brutality videos to go viral.

That and issues such as racial profiling are as evident now — in places such as Baltimore, Ferguson and other inner cities — as they were in 1992 Los Angeles, says Armour, the USC professor and author of a book about what he calls the 1992 "uprising."

"Ain't nothing changed but the year it is," he says. 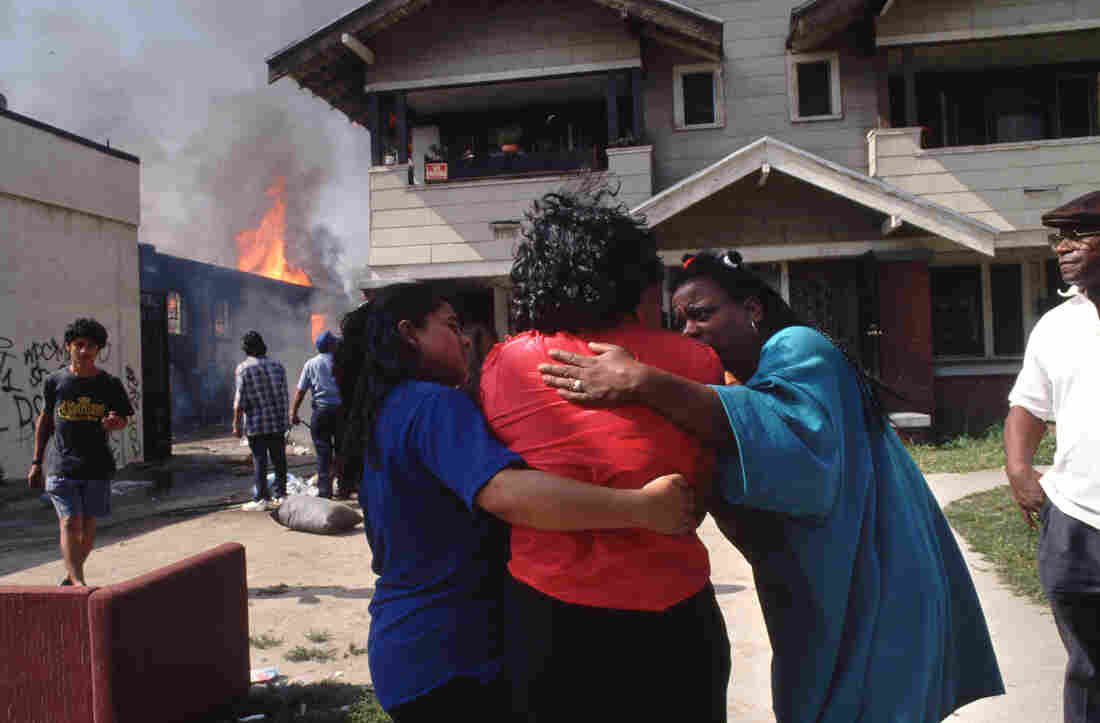 A woman is comforted on April 30, 1992, as she stands next to a home burning as a result of the riots. Peter Turnley/Corbis/VCG via Getty Images hide caption

After the civil trial, Rodney King was awarded a settlement. He bought a modest house for his mother and one for himself in the LA suburb of Rialto, and occasionally spoke with at-risk kids at the request of local police. King, the son of an alcoholic father, continued to struggle with his own alcohol use after his beating. He told NPR in April 2012 that his sobriety was a work in progress. He was engaged to be married when he died that June. A skilled swimmer and surfer, King was found unconscious at the bottom of his swimming pool. His autopsy reported drugs and alcohol were in his system at his time of death. He was 47.

In 1993, Stacey Koon and Laurence Powell, two of the four officers in the King case, were found guilty of violating King's civil rights. They both served 30 months in prison and did not return to the police force. They no longer live in California.

The other two officers, Timothy Wind and Theodore Briseno, were both fired by the LAPD and also no longer live in California.

Tom Bradley — the first African-American mayor of Los Angeles — died in 1998 at age 80. He served 20 years as the city's leader.

After extensive surgery and therapy, Reginald Denny — whose skull was fractured on April 29 when a rioter threw a brick at his head, among other injuries — regained his ability to walk and talk. He now lives in Arizona.