Accessibility links
President Trump Said He'd 'Drain The Swamp' In Washington If Elected. What Progress Has He Made? The phrase didn't originate with the Trump campaign. Advocates of tougher laws on political money and lobbying have used it for years. 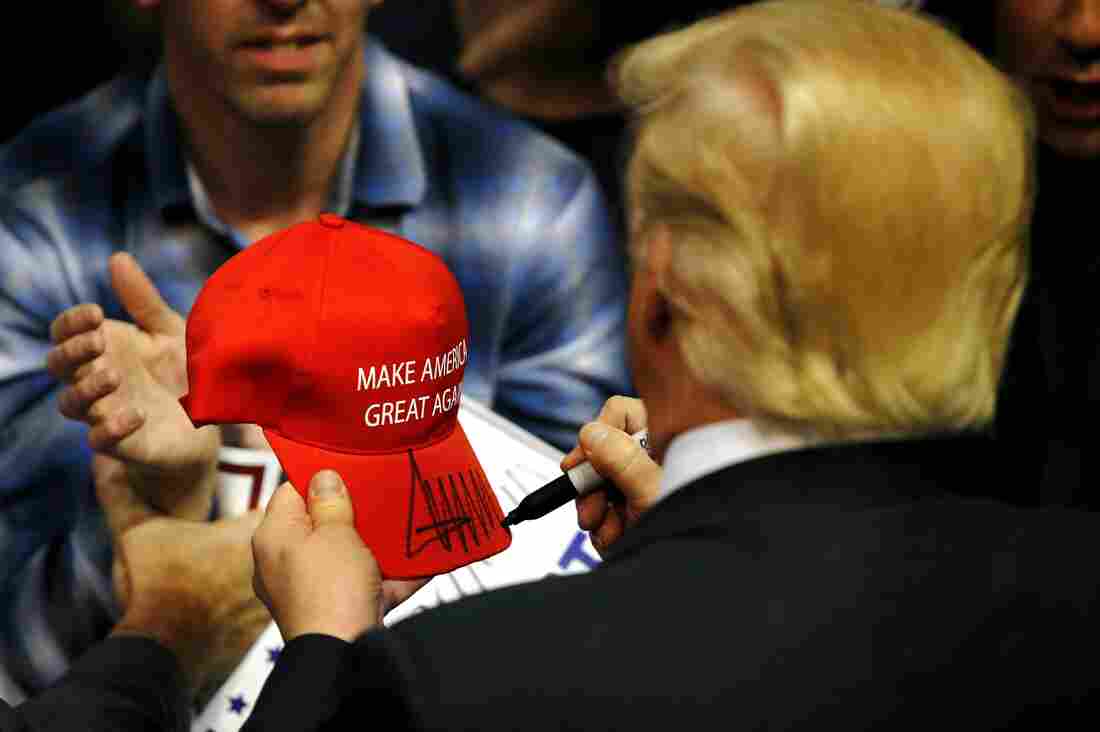 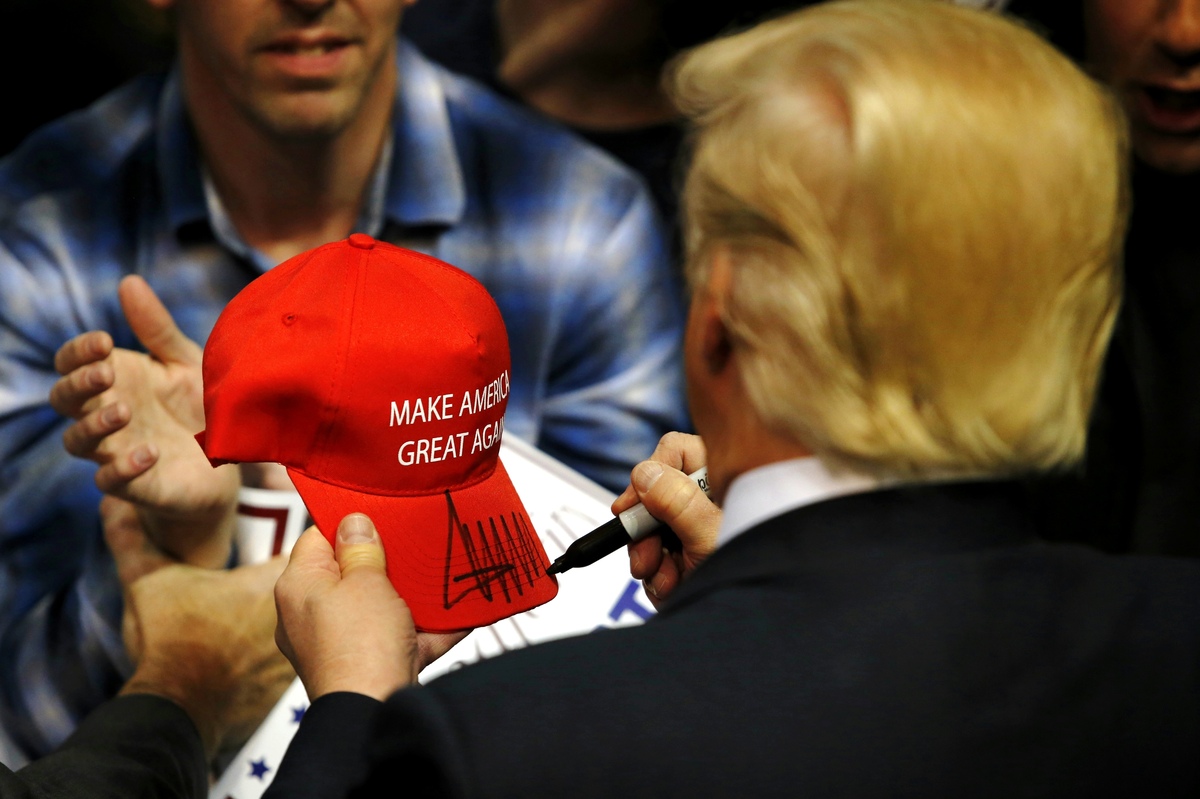 Republican presidential candidate Donald Trump signs a hat for a supporter after speaking at a campaign rally on April 11, 2016 in Albany, N.Y.

President Trump's campaign rallies were defined by three slogans, three syllables each, which the candidate led the crowd in chanting: "Build the wall," condemning illegal immigration; "Lock her up," attacking Democratic rival Hillary Clinton; and "Drain the swamp," all about cleaning up Washington.

At a Wisconsin rally last October, Trump announced, "It is time to drain the swamp in Washington, D.C. This is why I'm proposing a package of ethics reforms to make our government honest once again."

The phrase "drain the swamp" didn't originate with the Trump campaign. Advocates of tougher laws on political money and lobbying have used it for years.

But Trump had a plan. Trump promised to impose stronger "revolving door" rules, which basically say an official cannot leave government and then start lobbying his or her former colleagues. He did what he said he would do: Set a five-year revolving-door ban for his appointees; it's in an executive order on ethics he issued in January.

He also said he would ask Congress for a five-year lobbying ban on senators, representatives and top staffers. (They currently face one- or two-year bans under separate House and Senate rules.) There's no record of the White House actually making that request.

But closing the revolving door for ex-appointees doesn't address a current problem: the appointment of Washington lobbyists to the agencies that oversee their former employers. An array of such conflicts of interest were recently reported in the New York Times.

Steve Ellis, of the fiscal watchdog group Taxpayers for Common Sense, said it makes sense to hire people who already know the issues, but it's essential "to make sure the people have the taxpayers' interest at heart when they're working in government."

Trump said his plan would close the legal loophole by which lobbyists avoid registering under the Lobbying Disclosure Act, which would compel them to disclose their activities. (This was an issue for Newt Gingrich, now a Trump adviser, when he ran for president in 2012.) But changing the law requires congressional action, and so far no lawmakers have introduced the necessary legislation.

At that Wisconsin rally, Trump had one more reform: "I'm going to ask Congress to pass a campaign finance reform that prevents registered foreign lobbyists from raising money in American elections and politics."

But if he has asked, Congress hasn't responded. No bill has been introduced.

Still, the promise to drain the swamp "is a central topic to why President Trump won this election," said John Pudner, director of a conservative good-government group called Take Back Our Republic. His sense of the situation now: Trump started strong on the ethics issues but needs to do more follow-up.

Pudner also sees a problem, though: Trump's own decision to maintain ownership of his business empire, through a transparent trust that designates him as the only beneficiary. Pudner said it would have been wiser to avoid conflicts of interest by divesting — selling — the businesses, as other recent presidents have done.

"I think divestiture is the thing that moving forward calls into question what's being done, and that needs to be a priority still," Pudner said.

Already, a battalion of progressive groups is scrutinizing Trump's conflicts of interest. CREW — Citizens for Responsibility and Ethics in Washington — sued him as soon as he took office.

"We and a lot of others are watching closely to see what his business interests are and how they evolve, and what kind of actions he takes as president," said CREW president Noah Bookbinder.

The administration recently has appeared to rethink what "draining the swamp" really means.

In a statement to NPR, the White House said Trump has "kept his promise of not being swayed by special interests" as he attacks the swamp. The statement cited four examples: his executive order on ethics, "significant regulatory reform," the government hiring freeze and a directive to examine waste at federal agencies.

When Mick Mulvaney, director of management and budget, made a video about government efficiency recently, he said, "President Trump calls it draining the swamp. What it really means is making the government more accountable to you, more effective and more efficient."

But if draining the swamp means less lobbying, that isn't happening. Since Election Day, the number of new lobbyist registrations is up compared with a year ago.