Accessibility links
Review: 'The Handmaid's Tale' On Hulu The adaptation of Margaret Atwood's dystopian 1985 novel is a horror show revealed in slow motion — and the true horror of its brutal, patriarchal future theocracy is how possible it seems today. 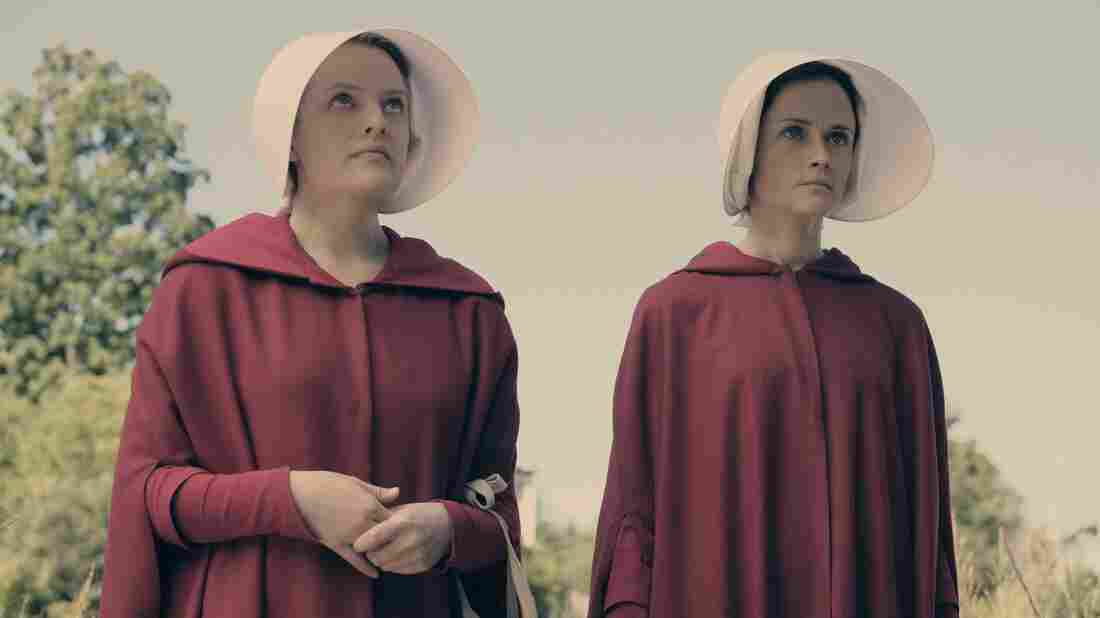 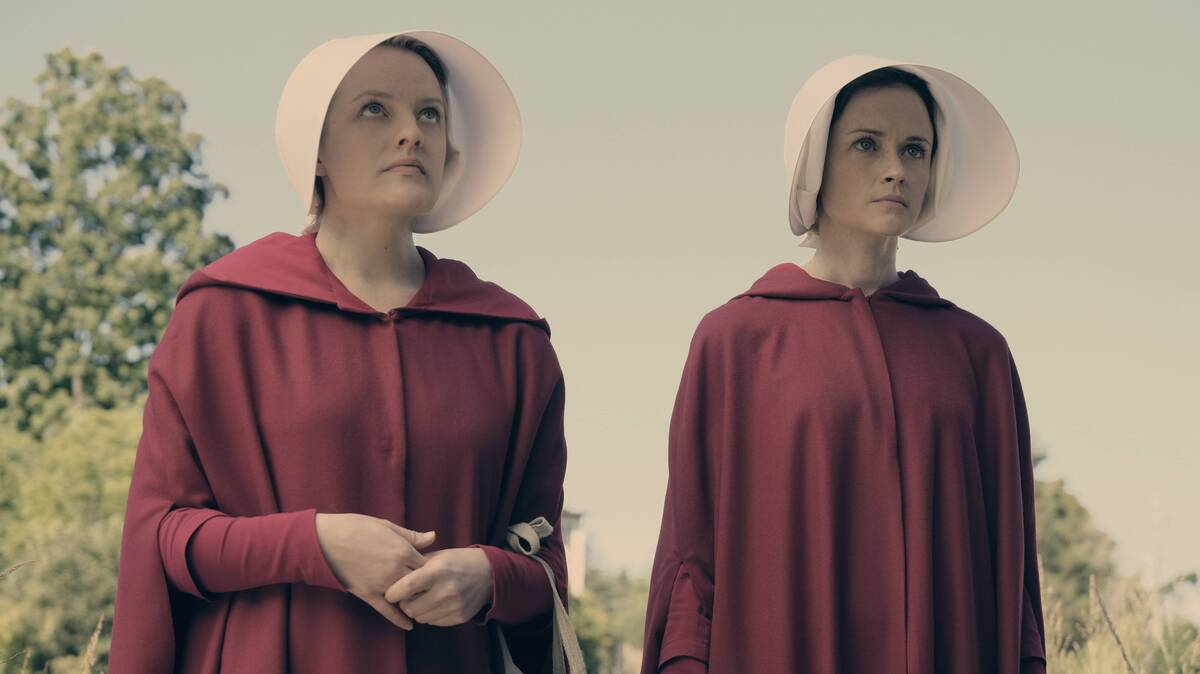 Elisabeth Moss and Alexis Bledel as the Handmaids Offred and Ofglen in Hulu's new limited series, The Handmaid's Tale.

Be warned: This story talks about characters who are forced into sexual slavery.

As the first episode begins, Mad Men alumna Elisabeth Moss is running, fleeing security forces with her daughter, minutes before they are both captured.

Then, time jumps to the near future. We learn Moss' character is now a Handmaid, a woman forced to have babies. In one scene, we see her sitting in a simple room in a vast house, clad in a white bonnet, blood red dress and a shroud of melancholy as thick as a suffocating blanket. "I had a window with white curtains and the glass is shatterproof," she says in a weary monotone. "But it isn't running away they're afraid of. It's those other escapes; the ones you can open in yourself, given a cutting edge. My name is Offred. I had another name, but it's forbidden now."

Moss is compelling and relatable as Offred, a woman who seems both bewildered and numbed by the hideous world she's living in. The series debuts on Hulu today.

Fans of Atwood's 1985 novel know the setup: A brutal, totalitarian theocracy has replaced the U.S. government, sterility is rising due to environmental contamination and fewer women can have babies. Fertile women are captured and forced to serve as Handmaids to society's elite leaders. Offred's name denotes the commander she serves, Fred Waterford, played by Joseph Fiennes.

One searing scene features Offred's memory of Aunt Lydia, the abusive headmistress who trains new Handmaids, quoting scripture and shocking the women with cattle prods. Eventually, she explains their duties as breeders. "You girls will serve the leaders of the faithful and their barren wives," says Aunt Lydia, who cites Tinder as one source of the moral turpitude that has caused God to create the infertility crisis. "You will bear children for them. Oh! You are so lucky!"

(Atwood, who also served as a consulting producer on Hulu's series, pops up in one scene from the first episode, where she slaps Offred for being slow to respond during an indoctrination session.)

This is a world of 1984-style paranoia and doublespeak. On the surface, it's a placid, polite community that just happens to have black-clad guards with machine guns on every corner. But beneath that veneer is a world of grim desperation, fear and oppression. Women are stripped of husbands, children, jobs, their own money and control over their sexuality.

The scene depicting the "ceremony" in which Handmaids copulate with commanders is emotionally brutal without being overly explicit. Commanders' wives cradle the Handmaids' heads in their laps during the act, creating a nightmarish scenario. Both prisoner and oppressor are forced into a brutal, dehumanizing ritual that pretends to be edifying.

As the fight over abortion rights intensifies in America and authoritarianism rises across the world, it's tough to imagine a better time for Atwood's story to come to television.

As the fight over abortion rights intensifies in America and authoritarianism rises across the world, it's tough to imagine a better time for Atwood's story to come to television. It is a cautionary tale on how quickly liberties can vanish. And it's a meditation on how much of a woman's freedom can be connected to control of her reproductive rights.

We have seen this kind of sexual slavery visited on other TV characters, like the African women taken from their homes in the groundbreaking historical miniseries Roots. Hulu's Handmaid's Tale is jarring because it visits those gruesome indignities on contemporary American women, in a setting that feels troublingly familiar.

Moss made headlines last week when she told an audience at the Tribeca Film Festival that, to her, Handmaid's Tale is "not a feminist story." But I wonder if that answer was more about avoiding a political discussion, because the series does an excellent job of depicting women struggling to survive and resist a system that defines females as second-class citizens — which kinda sounds like the definition of feminism.

Ultimately, what makes Hulu's adaptation all the more chilling is the way it makes so much of Offred's new reality seem absolutely normal. "I know this must feel very strange," Aunt Lydia tells her Handmaids-in-training. "But ordinary is just what you're used to. This may not seem ordinary to you right now. But after a time it will."

In a country where sexual harassment scandals regularly land on the front page, the patriarchy of The Handmaid's Tale doesn't feel so far-fetched, which is the most horrific thing about it.