Accessibility links
What We Know About Donald Trump's Tax Plan The White House is issuing tax-plan guidelines today. It's not likely to get taken up soon, but Trump's Treasury secretary is pledging to move quickly — and to achieve 3 percent growth. 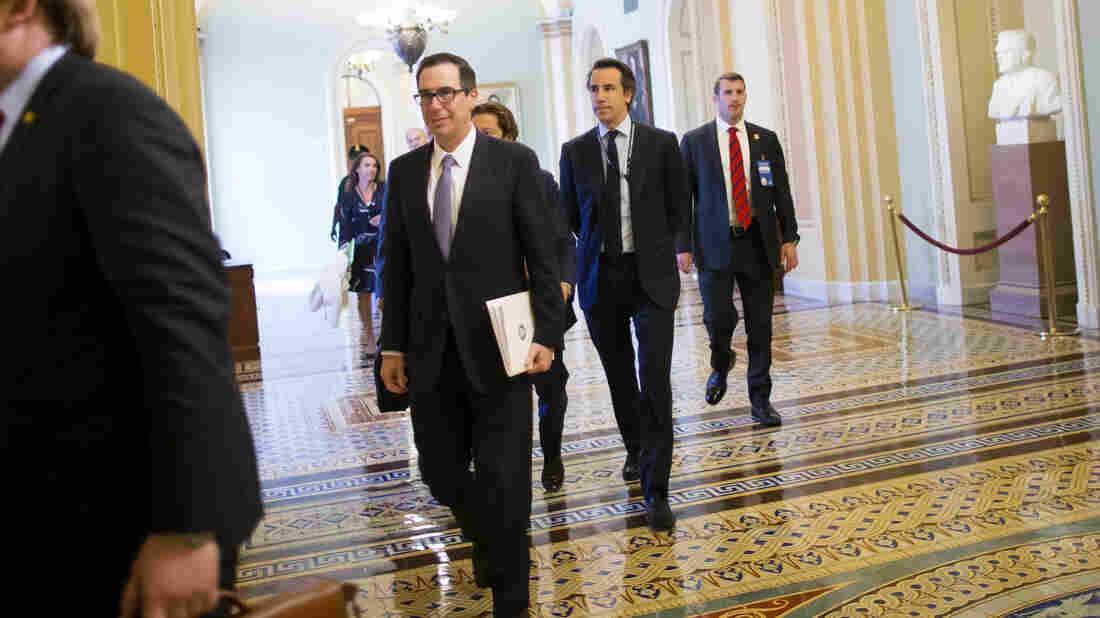 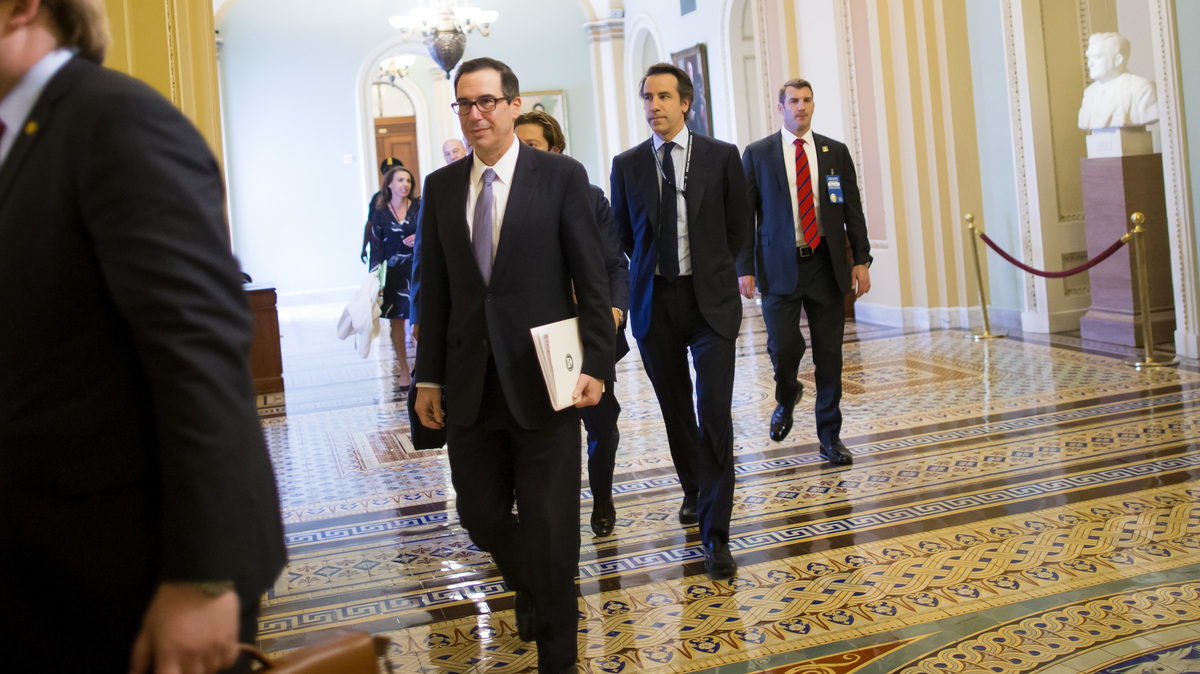 The White House is banging the drums that President Trump is doing something big again ahead of his 100th day in office — unveiling a tax "plan."

"This is going to be the biggest tax cut and the largest tax reform in the history of our country," Trump's Treasury Secretary Steve Mnuchin said at a panel Wednesday morning.

But what's coming out later Wednesday afternoon are guidelines, not legislation, akin to what would be revealed in a campaign. Though there's no sign Congress is ready to take this up immediately, Mnuchin made it sound urgent, saying the administration wants to move "as fast as we can."

The guidelines do set out the president's priorities, so let's take a peek:

--Modest middle-class cuts: There would also be tax cuts across the board, including a modest one for those considered middle class.

--Fit on a postcard? Trump's Treasury secretary said this plan would seek to simplify the tax code by allowing people to fill out their taxes on a "large postcard." While people always like the idea of making it easier to fill out their taxes, they might not like what benefits they'd potentially lose. It could mean doing away with popular deductions like the home mortgage deduction, something that back in December Mnuchin said Trump's plan would scale back.

In one ambiguous word: growth.

"We fundamentally believe we can get to 3 percent sustained economic growth," Mnuchin said Wednesday morning.

Experts predicted during the campaign that Trump's various iterations of his tax plan would blow a hole of trillions of dollars in the budget, even bigger than the Bush tax cuts.

That was true even using dynamic scoring, which takes growth into account.

The nonpartisan Tax Policy Center says that lowering the corporate tax rate from 35 percent to 15 percent would cost more than $2 trillion over a decade, for example.

--No BAT, man: Part of how House Speaker Paul Ryan wanted to pay for this (and it would still only be part) was through what's formally called a border-adjustment tax, or BAT. It's basically an import tax. But the Trump administration's early embrace of the BAT landed them in political hot water. Why? An import tax would mean a lot of things Americans buy at grocery and retail stores would go up.

That why it's being left out, because it's seen as too controversial right now. The last thing Trump wants is to have the narrative hijacked and turned into how he's proposing to increase the cost of everyone's avocados.

But, once again, it's another revenue source shut off.

3. If the BAT was Ryan's idea, what kind of buy-in does President Trump have from Republican leadership in Congress?

After the failed health care bill, the White House has been trying hard to show it is taking the lead on this one.

Trump wouldn't own Trumpcare (or was it Ryancare?), but this tax overhaul is all him. For now, Republican leaders are saying they're OK with that (at least publicly).

"We all agree on the benefits of tax reform and the place we want to land, and the question is how you reach that place," Ryan spokeswoman AshLee Strong said in a statement. "We continue to have productive discussions with the administration about all ideas on the table."

In other words, that's a nice way of saying this is at the infant stages. Congress still has to write and pass a bill. A tax overhaul hasn't been done in 30 years, and there are plenty of people on Capitol Hill who will want their hands on this.

4. Is there anything in this plan for Democrats?

There aren't a lot of details, but Politico and the Wall Street Journal report that what's unveiled Wednesday will include infrastructure and child-care tax credits that have been pushed by Trump's daughter, Ivanka Trump.

Those were priorities during the campaign, but they weren't attached to a tax plan. It's an attempt to paint Trump as bipartisan in trying to get Democrats on board since those are measures they'd likely have some measure of support for — although the details are always what matter.

But a tax overhaul, which again hasn't been done in 30 years, is hard enough without attaching a $1 trillion infrastructure plan and a $500 billion child-care tax credit.

Democrats certainly don't want to couple those programs with tax cuts they feel overwhelmingly benefit the wealthy. "You didn't hear much of anything about working families," Oregon Democrat Ron Wyden told Politico. "I'm certainly not going to support a tax proposal that gives crumbs to working families and cakes to the fortunate few."

Even Republicans are skeptical they can put them together. "It's probably going to end up being, in the end ... a Republican-only exercise," John Thune said in the same story.

So at this point, all of this appears to be another show for Trump's public relations ahead of the 100-day marker, one he's calling a "ridiculous standard," while at the same time launching a website touting all of his accomplishments.

There are many, many questions about the feasibility of this plan, and you can be almost guaranteed it will change quite a bit before there's any vote to make any of it law.

There's a long way to go.