Accessibility links
Trump's Tweets On Court Blocking 'Sanctuary City' Order: 5 Facts To Know President Trump has called out the 9th Circuit Court of Appeals, but the recent ruling on withholding federal grants was made by a single district court judge. 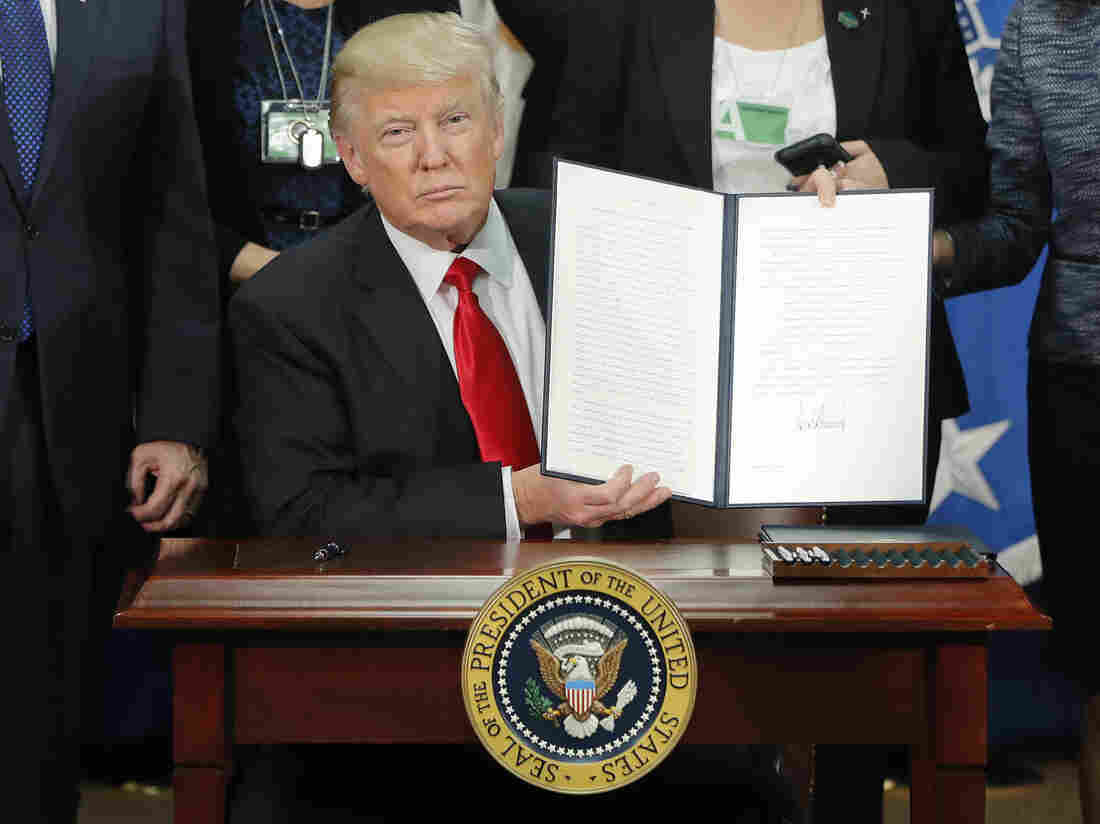 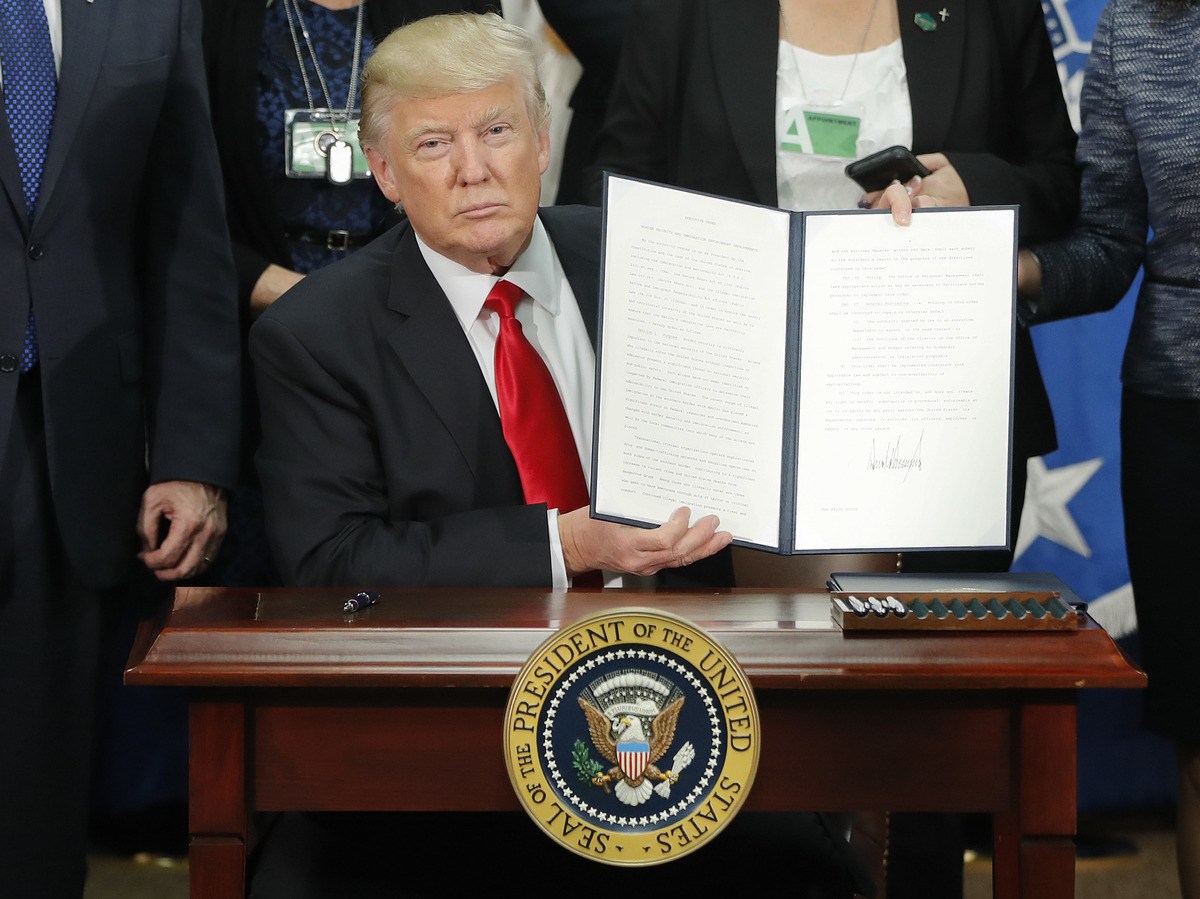 President Trump has been tweeting about a federal court ruling that temporarily blocked his plan to suspend funding for "sanctuary cities."

These are cities — among them New York, Los Angeles, Houston, Chicago and San Francisco — that have limited their cooperation with federal immigration authorities. For example, they may refuse to detain people who are in the U.S. illegally on behalf of the federal agents.

First the Ninth Circuit rules against the ban & now it hits again on sanctuary cities-both ridiculous rulings. See you in the Supreme Court!

Out of our very big country, with many choices, does everyone notice that both the "ban" case and now the "sanctuary" case is brought in ...

...the Ninth Circuit, which has a terrible record of being overturned (close to 80%). They used to call this "judge shopping!" Messy system.

Here are five key points to keep in mind about the court ruling and Trump's reaction.

It wasn't the 9th Circuit Court of Appeals that ruled against the administration on "sanctuary cities." It was a single district court judge in San Francisco who issued the court ruling, which applies nationwide.

There is in fact no appeal yet, though if the case is appealed, it almost certainly will go to the 9th Circuit, and probably the Supreme Court.

It is true that the 9th Circuit is known as the most liberal circuit among the 13 federal appeals courts.

The 9th, which covers nine states, including California, is the biggest in the country in terms of area and population, and it was indeed reversed by the Supreme Court in eight of 10 cases that the Supreme Court reviewed and decided last term.

But that is not far off the average circuit reversal rate.

It is not true, as Trump has previously claimed, that the 9th is the circuit most reversed by the Supreme Court.

On the judge-shopping question — it is natural that many immigration cases come out of California. The state has the largest number of unauthorized immigrants in the country, according to the Migration Policy Institute, which crunched some U.S. Census Bureau numbers.

4. In law as in life, what goes around comes around

Conservatives during the Obama administration advanced and perfected a strategy of challenging Obama's executive actions in court. They brought cases in Texas, for example, a conservative state with conservative judges.

A single Republican-appointed federal judge in Texas, for instance, blocked Obama's attempt to temporarily grant legal status to some immigrants living in the U.S. illegally.

That judge, like the judge in San Francisco, said the president had exceeded the authority granted him by Congress and the Constitution.

In the San Francisco case on sanctuary cities, Judge William Orrick III, an Obama appointee, linked his decision to the Constitution's provision giving Congress control over the federal purse.

Congress, he said, did not authorize putting such conditions on federal grants. To buttress the point, he cited an array of Supreme Court decisions that are stars in the current conservative firmament.

In both opinions — one written by Justice Antonin Scalia, a conservative icon, and the other written by Chief Justice John Roberts, a conservative George W. Bush appointee — the legal underpinning was that the federal government cannot commandeer the state's apparatus to enforce a federal mandate.

A rare pattern is emerging in the Trump administration's most highly visible court challenges. The president's own words, and those of his advisers, are being used against them.

In the travel ban case, the Justice Department's claim that this was a carefully crafted and narrow ban of Muslims in seven countries was contradicted by the president's repeated pledge during his campaign to ban all Muslims. Indeed, Trump adviser and former New York Mayor Rudy Giuliani said that Trump's intent was to come up with a "Muslim ban" and make it legal.

Similarly, in the sanctuary city case, Justice Department lawyers argued that the executive order would affect only a few grants. But that is not how President Trump or Attorney General Jeff Sessions has talked about it. Both have portrayed the cutoff of federal funds as a club to force these cities to aid federal authorities in carrying out Trump administration immigration policies.

A previous version of this story incorrectly named Judge William Orrick Jr. as the district court judge in the sanctuary city case. That judge is actually his son, William Orrick III. The elder Orrick died in 2003.