Accessibility links
Book Review: 'Walkaway,' By Cory Doctorow Cory Doctorow's latest novel is set in a ripped-from-the-headlines near future dystopia, where the creative and the capable — and the lost — are walking into the wilderness to build a new world.

In 'Walkaway,' A Blueprint For A New, Weird (But Better) World

In 'Walkaway,' A Blueprint For A New, Weird (But Better) World 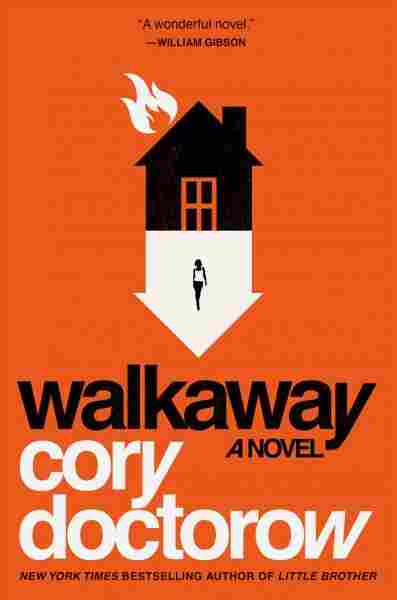 Here's the thing I love about Cory Doctorow: No one is weirder than he is.

And I don't mean run-of-the-mill weird. I don't mean personally weird (though he might be, I don't know him), but as a writer? Super-weird in the best possible way. And he's deep-weird, not gimmicky-weird. Weird in the sense that he has done the math, calculated the forking paths, and is presenting to you a world which isn't just amusing and borderline plausible, but a dispatch from next Tuesday.

His novels read less like speculation than prediction — a hardcore nerd's careful read on technology and biology and entropy, impeccably sourced and, in their own way, as real and present and hopeful as the augury of a Bizarro World Cassandra with carpal tunnel and grease under her nails.

Walkaway is his newest, and it is remarkable. It's one of those books that I don't want to describe at all, because doing so would ruin the new car smell of stepping into a fresh-off-the-lot universe. It would sour the joy of getting face-punched over and over again by the utopian/dystopian ideas, theories, arguments and philosophies that Doctorow lays down. It would, in short, wreck the fun.

But let's do this, okay? I'm going to tell you the basics. Because going in, there are some things you should know. Walkaway is, as the title suggests, a story of abandonment. Of giving up an old thing for something new, risky and beautiful. In the near future, the world (more specifically, Canada) is a mess. Global ecological catastrophes, refugee crises, out of control wealth disparity — it's all come true. Basically take the front page of any newspaper today, fast forward by a decade or so, and you're at home in Walkaway.

Enter Hubert, Etc. (so-called because of his 19 middle names) and his buddy Seth. They're both poor, slightly over-the-hill scenesters refusing to give up on the tatters of their fading youth. Borderline survivors of a post-scarcity world and a gig economy gone full-tilt dysto, they show up at a "Communist Party" being thrown by Natalie, renegade daughter of a super-rich family (zottarich in Doctorow-ese) who is an expert at taking over old industrial spaces, sweet-talking the mothballed machinery into operation, adding a DJ and some 3D printers and making a free-for-all rave of it.

The cops come. Drones descend. Bad things happen. Natalie, Etcetera and Seth flee and, in short order, decide that they're sick of The Man and The Man's rules and they're just gonna, you know, walk away.

They're not the first. Doctorow's world is one where most people live in "Default" — as in the default reality of cities, bills, jobs, whatever. But in between these spirit-crushing bastions of old thought and old rules are a million miles of everything else. Fields. Wildflowers. Entire abandoned cities left to rot. And in Doctorow's fantasy, it is into these spaces that all the world's smart people and capable people and pissed-off people have gone.

"The point of Walkaway is the first days of a better nation," says one of Doctorow's characters. Says many of them, actually. That's the recurring belief-system on which the book runs. It is the story of precisely this — what comes after the slow-burn apocalypse we all secretly fear is coming, how it will work, how it will all go wrong and how it will get made right again with drones, wet printers and elbow grease. It's like the Genesis story of a world not yet here, but maybe dangerously close. After the flood, this is how we rebuilt ...

And yes, it sometimes reads like a series of philosophical set-pieces stitched together with drone fights and lots of sex. Like a Michael Bay movie if all the explosions were emotional. But the philosophy is fascinating and, somehow, rarely dull — because it, like Walkaway culture, revolves around sharing, fierce debate and open-sourced best practices. It is world-as-lesson-as-world. An anti-Atlas Shrugged. An origami argument that unfolds into a novel.

By my own (admittedly poor) math, it presents roughly ten thousand new, mind-bending and ground-breaking ideas per page. There are words in here that only otherwise exist in insular pockets of the maker/hacker/open source/thingiverse sub-sub-culture. In terms of its geek heroism, epic, generational scope and high stakes (only the survival of the human race, after all, and possibly the cure for death), the only literary comparison I can make is to Neal Stephenson's hard science disaster masterpiece, Seveneves, but Walkaway is more human. More squishy and close to home.

It's the story of a utopia in progress, as messy as every new thing ever is, told in the form of people talking to each other, arguing with each other and working together to solve problems. It's all about the deep, disturbing, recognizable weirdness of the future that must come from the present we have already made for ourselves, trying to figure out what went wrong and what comes next.