Accessibility links
With 'Diaspora,' Christian Scott aTunde Adjuah Opens The Cultures Of Sound The trumpeter stretches into trap and electronics on Diaspora. Flutist Elena Pinderhughes guests on the soothing and locomotive first single. 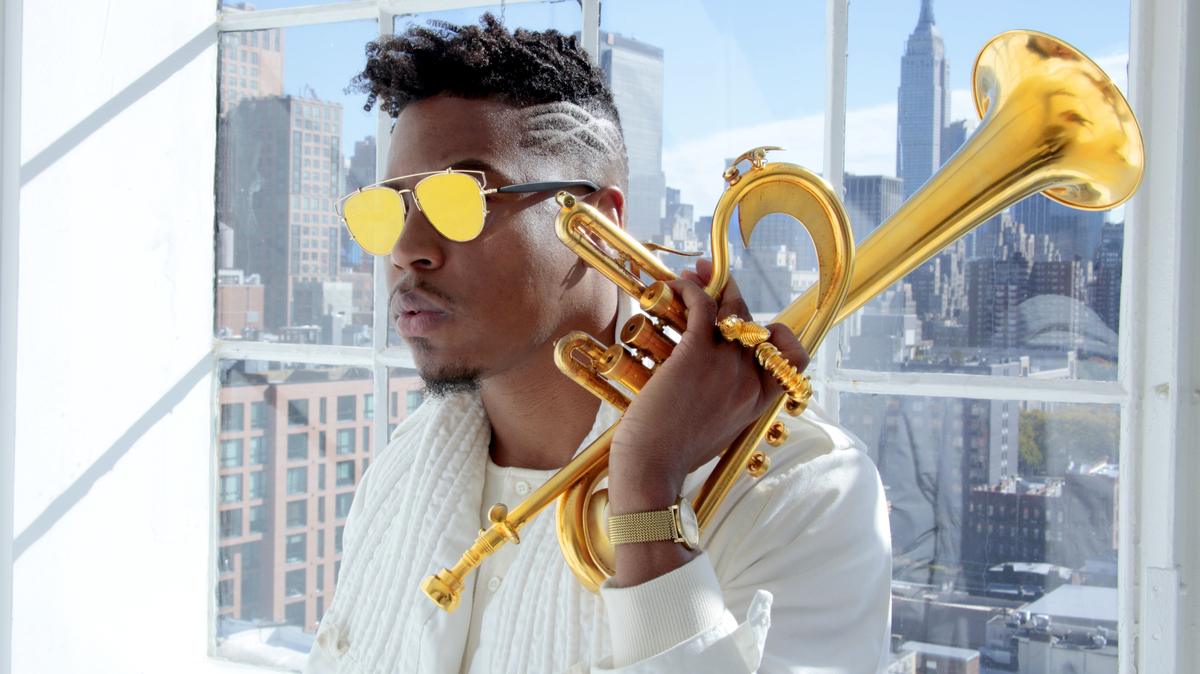 Kiel Scott/Courtesy of the artist

Christian Scott aTunde Adjuah, the firebrand trumpeter from New Orleans, doesn't go in for small gestures. His current project is The Centennial Trilogy, a three-album series intended to confront a range of societal issues, especially as they relate to the African-American population. The style of this new work carries a no less ambitious agenda, blending aspects of post-bop, trap and electronics, according to the non-idiomatic designation that Adjuah likes to call "Stretch Music."

Ruler Rebel was the first volume in Adjuah's trilogy, released on March 31 to an enthusiastic reception. The second installment will be titled Diaspora, and will arrive via Ropeadope on June 23. (The final volume, The Emancipation Procrastination, has an unspecified release date.)

The title track of Diaspora is also Adjuah's lead single, with a sound both soothing and locomotive: It begins with a drum loop and a piano riff, which functions as the track's core sample. While it doesn't have much in the way of harmonic development, the piece has a clear forward pull.

Adjuah, who grew up steeped in New Orleans parade culture, has an unusually direct connection to the heraldic properties of his instrument. But he also understands how to make a horn whisper, murmur and coo. Listen to what he does here with a Harmon mute and some multi-tracked harmony, evoking both the pop-jazz conventions of a trumpeter like Herb Alpert and the simmering composure of an R&B singer like Maxwell.

The other distinguishing feature of "Diaspora" is the work of Elena Pinderhughes, a virtuoso young flutist and one of Adjuah's closest collaborators. (She was a featured guest on his 2015 album Stretch Music, and again on Ruler Rebel.) Pinderhughes has a warmly effortless sound, and her blend with Adjuah's muted trumpet is practically seamless. She plays a relaxed and prepossessing solo starting just after the two-minute mark, and it's the most dynamic part of the track.

As for the title, "Diaspora" is meant to refer to the entirety of Adjuah's listening public, though the word obviously has specific connotations in the African-American experience. "We're trying to highlight the sameness between seemingly disparate cultures of sound," Adjuah explains in a statement accompanying this track, "as a means of showing a broader reverence and love for the people who create the sound and the experiences that lead them to those places."

Diaspora comes out June 23 on Ropeadope and Bandcamp.