Accessibility links
Trump To Renegotiate NAFTA After Call With Mexico, Canada Despite his long-standing criticism of the North American Free Trade Agreement, President Trump has opted to reopen negotiations on the deal rather than run the risk of scrapping it altogether.

With Billions At Stake, Trump Agrees To Mend NAFTA — Not End It

With Billions At Stake, Trump Agrees To Mend NAFTA — Not End It 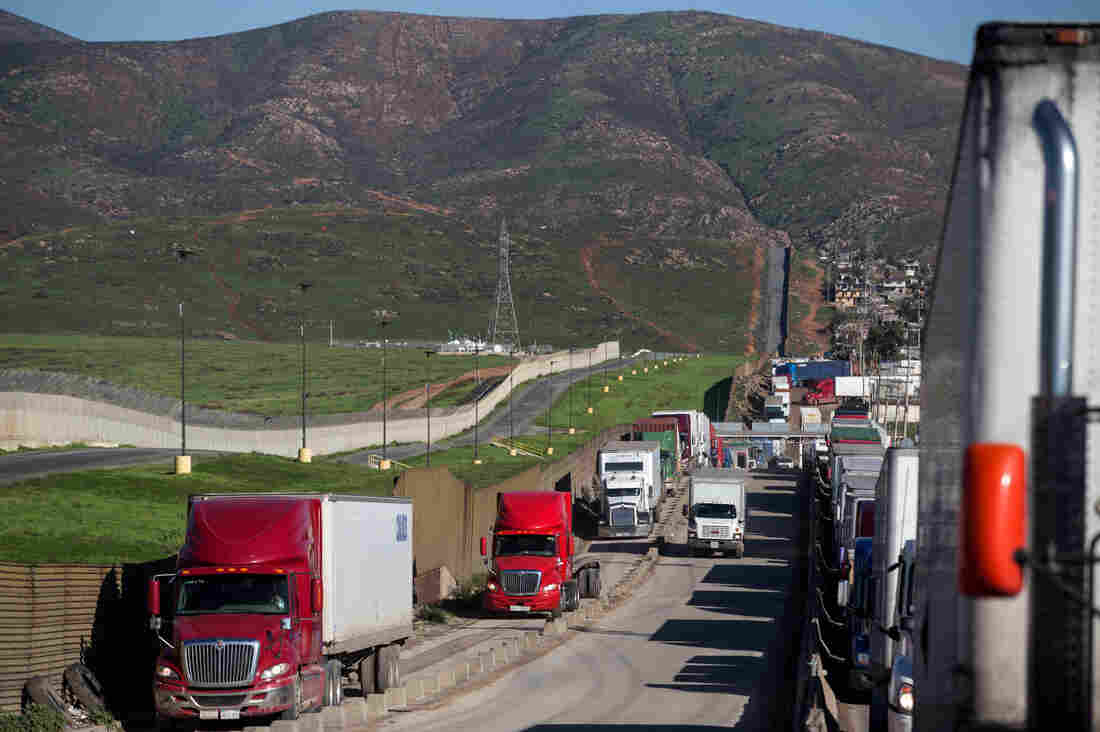 Trucks line up to cross to the United States near the Otay Commercial port of entry on the Mexican side of the U.S.-Mexico border on Jan. 25. Trump now says he will renegotiate the North American Free Trade Agreement, which he has long criticized, rather than scrap it. Guillermo Arias/AFP/Getty Images hide caption 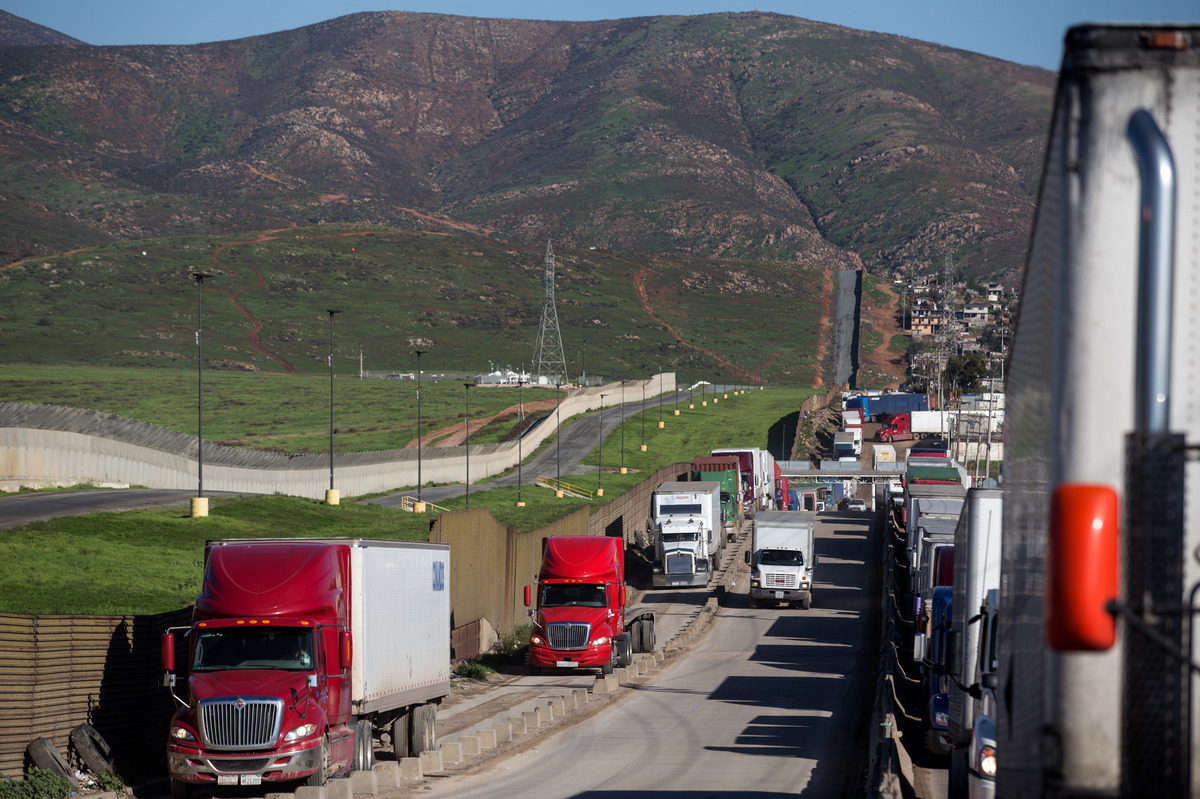 Trucks line up to cross to the United States near the Otay Commercial port of entry on the Mexican side of the U.S.-Mexico border on Jan. 25. Trump now says he will renegotiate the North American Free Trade Agreement, which he has long criticized, rather than scrap it.

President Trump still calls the North American Free Trade Agreement "a horrible deal" for the United States. But in opting to renegotiate — rather than cancel — the agreement, Trump acknowledged that backing out of NAFTA would be "a pretty big shock to the system."

After more than two decades, NAFTA is tightly woven into the economies of the U.S., Canada and Mexico. Trade among the three countries is much more robust and supply chains more tightly integrated than was the case in 1994 when NAFTA went into effect.

Last year, Canada and Mexico were the United States' second- and third-largest trading partners, respectively. With hundreds of billions of dollars at stake, it's little wonder those countries' leaders pressed Trump not to abandon the trade agreement.

"They called me and they said, rather than terminating NAFTA, could you please renegotiate?" Trump told reporters on Thursday.

"I think we'll be successful in the renegotiation, which, frankly, would be good because it would be simpler" than canceling the deal, Trump said.

Indeed, some of the president's fellow Republicans warned Trump that an abrupt withdrawal from NAFTA would be dangerous.

"Scrapping NAFTA would be a disastrously bad idea," Republican Sen. Ben Sasse of Nebraska said in a statement. "It would hurt American families at the check-out, and it would cripple American producers in the field and the office."

Sasse acknowledged that there are ways in which NAFTA could be improved, but he cautioned against canceling the deal.

Nebraska farmers are among the leading corn producers in the country. Corn growers could lose a significant export market if Mexico decided to go shopping elsewhere.

Sen. John McCain of Arizona had a similar warning for Trump.

"Withdrawing from #NAFTA would be a disaster for #Arizona jobs & economy," the Republican tweeted. Trump "shouldn't abandon this vital trade agreement."

The jump in imports and exports under NAFTA

In 1993 — the last full year before NAFTA — the U.S. had a $1.6 billion trade surplus with Mexico. Last year, as the president likes to point out, the U.S. ran a trade deficit with Mexico of $63 billion. In between, both imports and exports grew sharply.

Imports from Mexico jumped seven-fold, from $39.9 billion to $294 billion. Exports grew five-and-a-half times, from $41.5 billion to $230 billion. (These figures from the Commerce Department are not adjusted for inflation. In real terms, imports have jumped about 4 1/2 times while exports are up about 3 1/2 times.)

U.S. trade with Canada has seen a similar explosion since passage of CUSFTA, a precursor to NAFTA that was signed in 1988. The year before that agreement took effect, the U.S. had an $11 billion trade deficit with Canada. The deficit last year was almost exactly the same. But imports and exports had both jumped about four-fold (or about 2 1/2 times, adjusting for inflation.)

Even before NAFTA and its predecessor deal took effect, the United States had lower trade barriers than either Canada or Mexico, with tariffs on imported goods averaging just 4 or 5 percent. Canada's average tariff on U.S. imports was 9.65 percent, and Mexico's average was 12.36 percent. In essence, by signing NAFTA and agreeing to eliminate tariffs, Canada and Mexico did more to open their doors to trade than the U.S. did.

Tariffs are not the only barrier to trade, though. And attacking non-tariff barriers could be one goal of the new negotiations.

Trump has complained in recent days about U.S. dairy farmers who have been locked out of Canada's milk market. The U.S. has also ordered new tariffs on Canadian lumber, which the Trump administration argues has been unfairly subsidized by the Canadian government.

"This is not our idea of a properly functioning Free Trade Agreement," Commerce Secretary Wilbur Ross said in a statement.

A White House spokesman says the goal of the new negotiations is to modernize NAFTA, to consider industries and issues that might have grown up since the agreement was signed.

"Obviously the issue of dairy came up, so that's an area we would want to look at," said White House spokesman Sean Spicer.

The administration could also seek changes allowing the federal government to give preferential treatment to domestic suppliers when making purchasing decisions as part of the president's "Buy American" initiative.

Other possible changes include stronger protections in the trade deal for workers, the environment and intellectual property. Those were all components of the Trans-Pacific Partnership, which covered a dozen countries including Mexico and Canada. Trump formally withdrew from that trade agreement on his fourth day in office.