Accessibility links
Women's March Activism After 100 Days: Can The Enthusiasm Hold? The event in Washington, D.C., the day after President Trump's inauguration animated activists worldwide. It spurred more marches and political involvement. But the next phase is a challenging one. 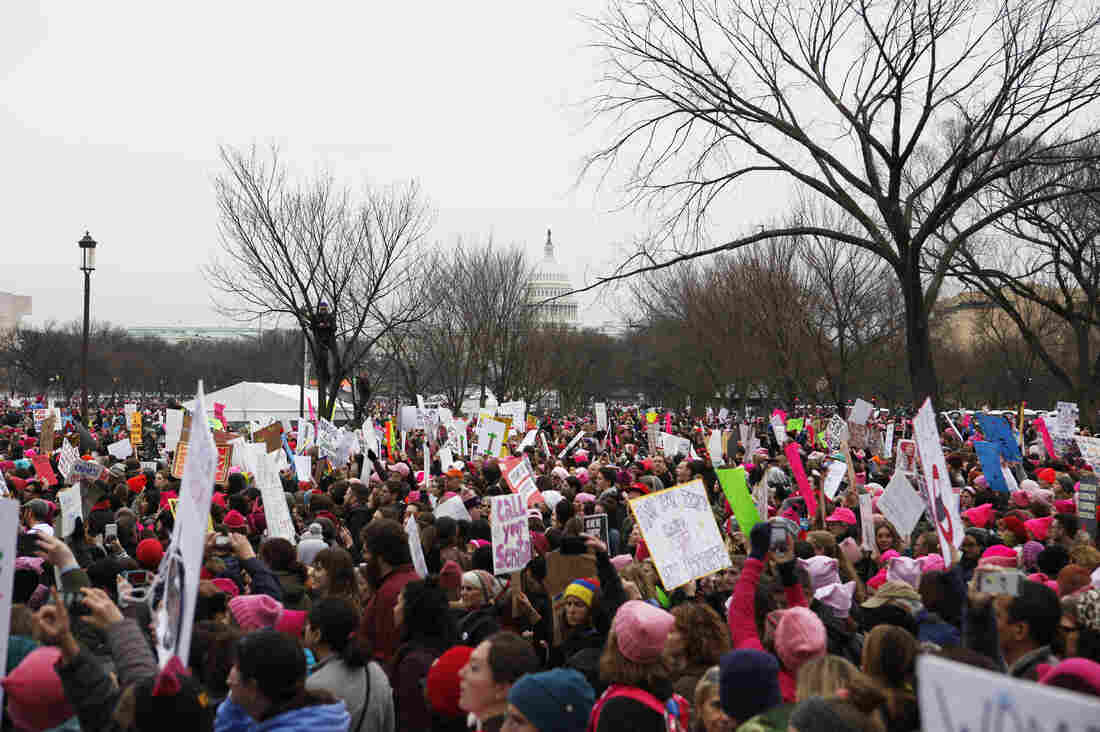 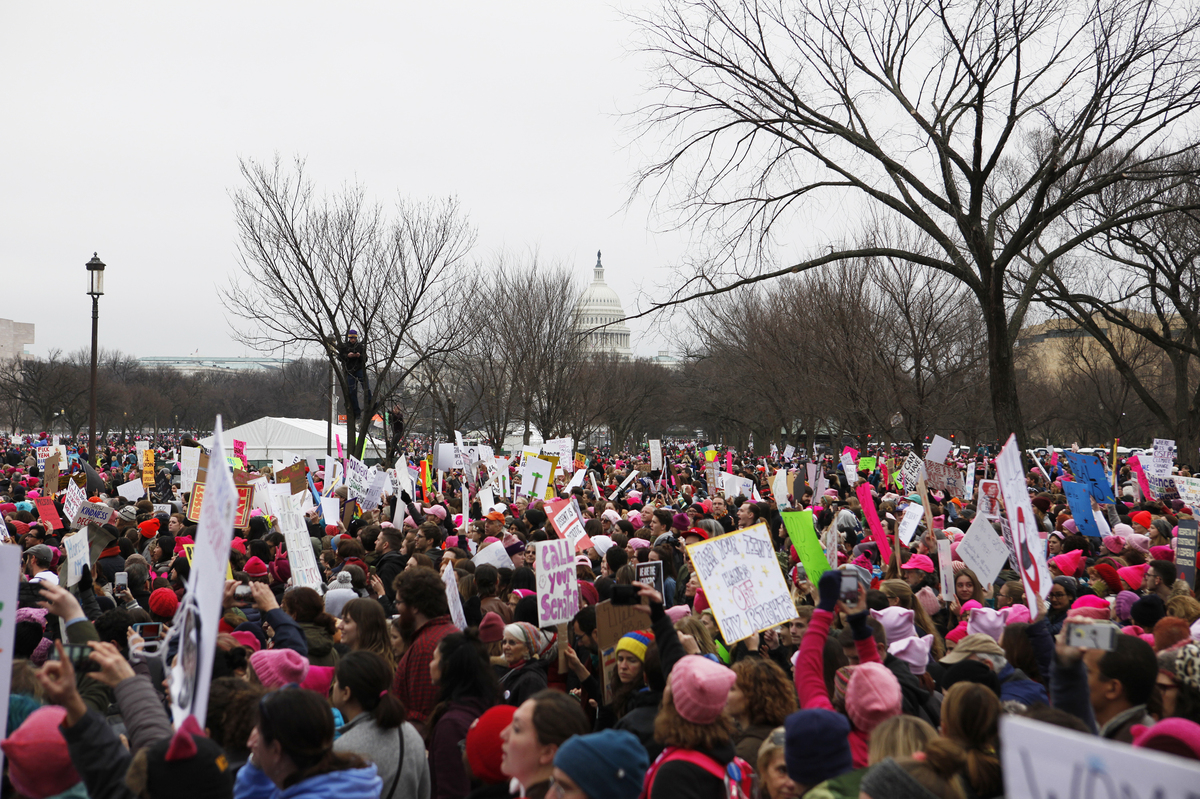 The Women's March brought together more than 400,000 protesters in Washington, D.C., and sparked more than 600 sister marches worldwide on Jan. 21.

Putting together a march on the National Mall is a demanding task, to put it mildly. And the organizers of the Women's March only had two months to put together an event that quickly grew from a Facebook post to a worldwide phenomenon.

"I think what's really interesting is we didn't necessarily have a lot of time to think about next steps," said activist Carmen Perez.

Perez helped organize the march that brought together more than 400,000 protesters in Washington, D.C. (and sparked more than 600 sister marches worldwide), the day after President Trump's inauguration. The intense planning involved not only logistics, like securing permits, but thinking about how to be inclusive in a march that refused to focus on any single issue.

"Our focus was to make sure that we were intentional, intersectional and making sure that people feel heard," she said.

As a group, the Women's March participants were most definitely heard; two political scientists writing for the Washington Post estimated that it was "likely the largest single-day demonstration in recorded U.S. history."

But then came the question about what should come next. One hundred days after those demonstrations mobilized tens of thousands of people, what effects can we see? It's clear that the march energized people on a range of issues. The question now is how sustained that energy can be over the long term.

So what, exactly, did the Women's March accomplish? It doesn't make sense to expect major political change just yet, says one political scientist.

"I think you always have to measure accomplishments in a particular context. And we are in a context where Republicans control the House, the Senate, and the presidency," said Lee Ann Banaszak, head of the Penn State political science department and an expert on political movements. And because many of the Women's March participants embraced liberal ideas, she said, their policy agenda isn't likely to go far in Washington.

What the march did achieve, Banaszak said, is help people to feel less alone and more unified. According to one attendee, seeing so many fellow marchers spurred her to get more politically engaged.

"I went from a sense of feeling very alone and isolated — especially since a majority of my family did support Trump and has very different political views from [mine] — to going to the march and having all those people there," said Dawn Ressel, a 42-year-old software designer from San Diego.

She called the march "inspiring and uplifting." She said it "definitely changed my attitude. It also changed my action." 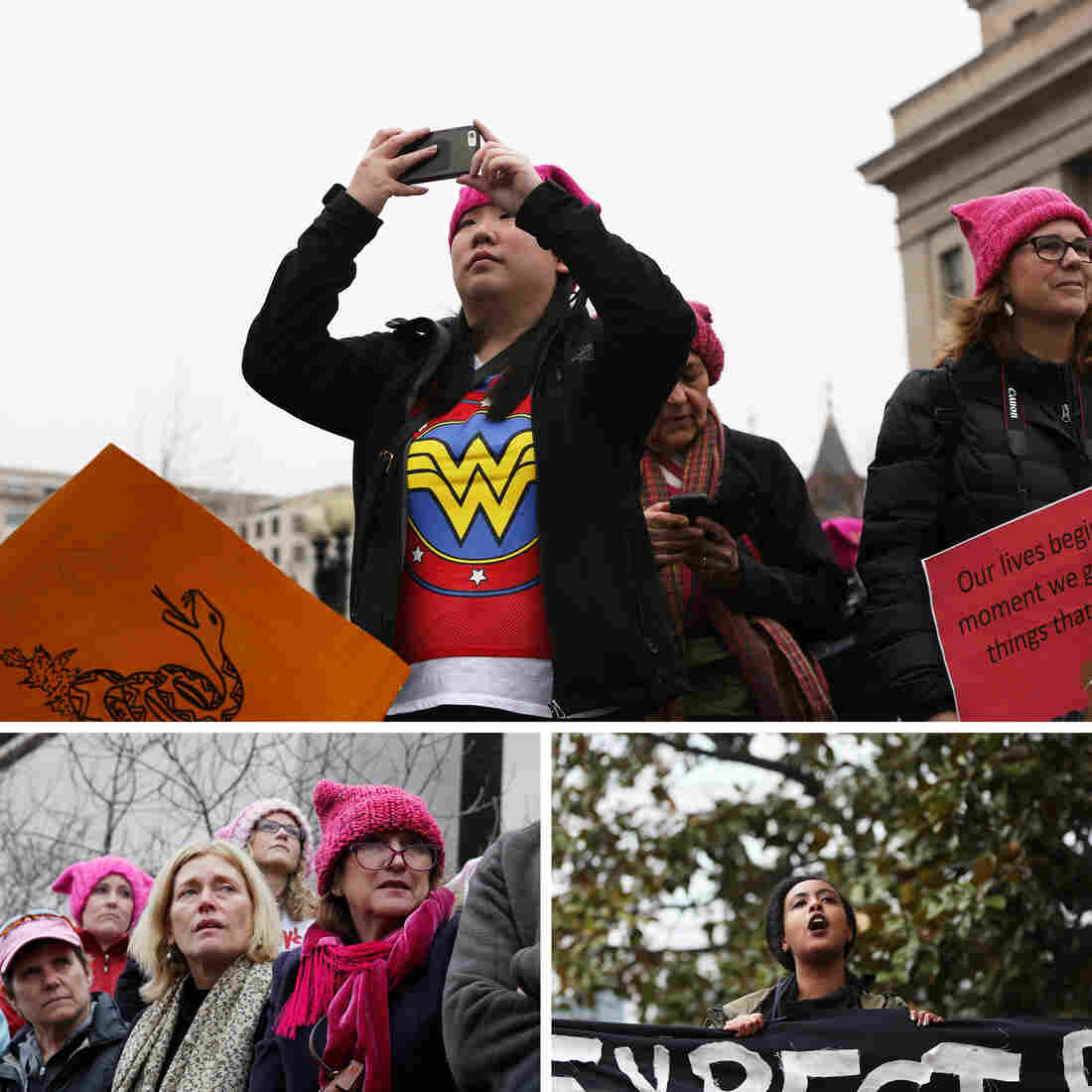 Scenes from the Women's March on Washington on Jan. 21. Meg Kelly/NPR hide caption 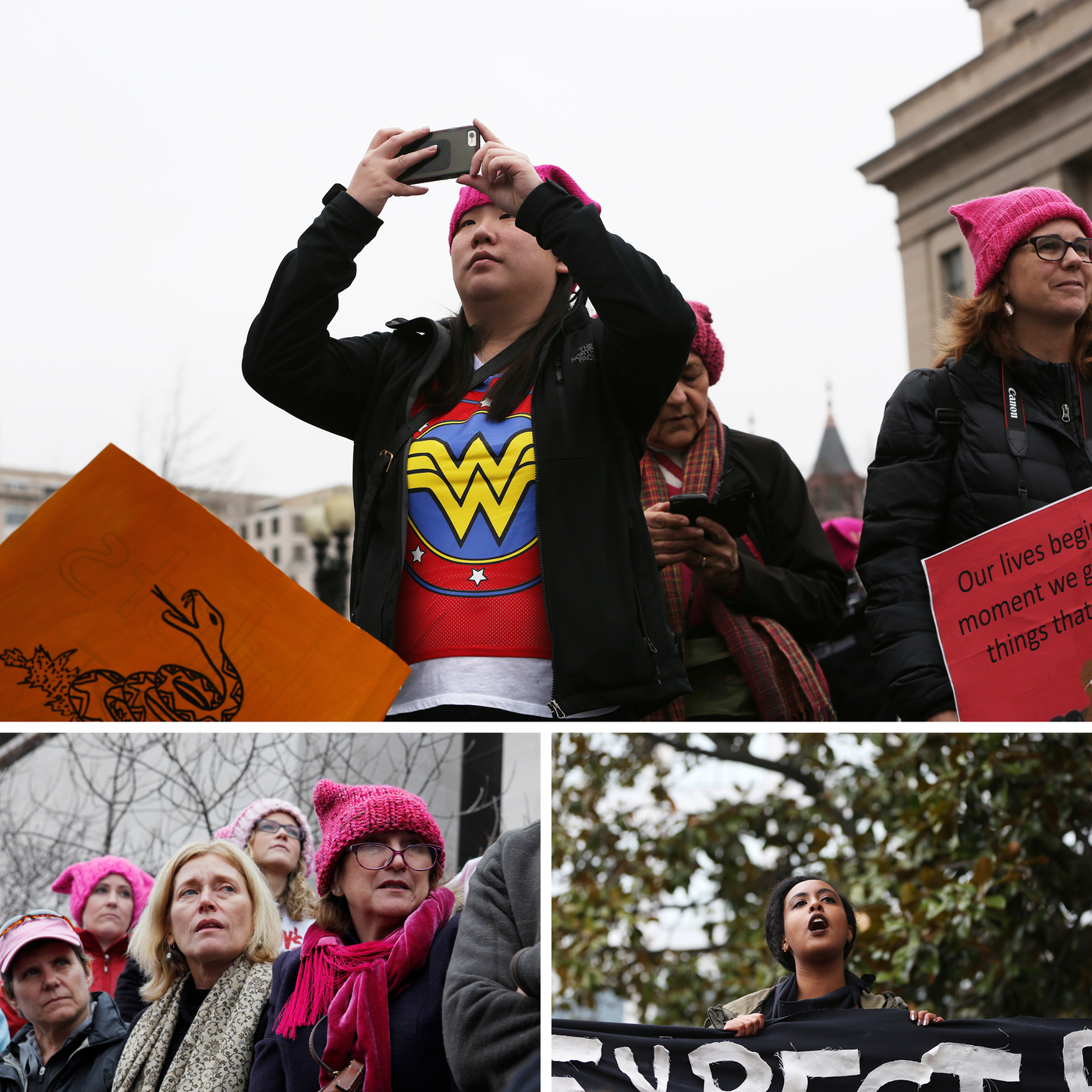 Scenes from the Women's March on Washington on Jan. 21.

The organizers of the Women's March helped prompt action for many of the participants; after the event, the organizers set up a plan called 10 Actions / 100 Days. Those "10 actions" are a series of calls for political participation, like writing postcards to lawmakers and participating in the "day without a woman" demonstration that took place on March 8, International Women's Day.

Ressel said the march did push her to do more. She has been reaching out to members of Congress by mail, phone and even fax. She also been meeting with other women to talk about how else to stay involved, like attending other marches.

Another participant said the march helped her get more politically active than she has been in years.

Maryland Democrats Aim To 'Build The Pipeline' For Women In Office

"I have called Congress people more since Trump's election than I had in the couple of decades before," said Julie Wittes Schlack, a 62-year-old writer from Cambridge, Mass. "I was an activist way back when, in the '60s and '70s. And then fairly dormant for a couple of decades."

The march likewise could translate into more names on the ballot in the coming years. Some women have said the march helped them decide to run for office. It's impossible to know exactly how many were energized by the march itself, but it appears there is an explosion in Democratic women interested in running for office. Emily's List, an organization that helps elect pro-abortion rights, Democratic women, last week said that it has heard from more than 11,000 women this year interested in running for office, up from 900 in 2016.

Energy from the march may have already played a part in a couple of elections. Political scientist Banaczak said she believes the Women's March boosted Democrats in recent special elections in normally-red congressional districts.

"I see Kansas and Georgia, those elections, as really being a sign that that mobilization is continuing," she said.

"I know there's not a direct connection necessarily," she added. "But I suspect a lot of that connection was from individuals inspired by either seeing the march or participating in it."

By virtue of its massive scope and the fact that it took place immediately after inauguration, the Women's March also set the stage for further demonstrations, including the April 22 March for Science.

"Seeing that many passionate people mobilized by a common cause sparked many in our community to think: why can't we do that for science?" said Lucky Tran, one of the science march organizers.

Can the enthusiasm last?

Many of the Women's March participants were electrified in the days and weeks after the action. Emboldened by the new sense of community, people like Ressel and Schlack made calls and sent emails and organized meetings about how to oppose Trump's policies.

But it's six months until the next Election Day, a year and a half until midterms, and almost four years until the next presidential election. If the movement sparked by the Women's March — and the broader "resistance movement" — wants to change policy, that's a long fight. And some activists, like Schlack, say they only have enough energy to fight for the issues they care about.

"There's so much terrible stuff happening on so many fronts," said Schlack. "It's like whack-a-mole. You kind of have to choose. At least for myself, I had to choose: 'Where am I going to concentrate my efforts?' "

And it's safe to say that most of the people marching on Jan. 21 are not full-time activists. Ressel said that her action happens "in waves, depending on what is going on in my life."

As the memories of all those pink-hatted mobs recedes into the past, the challenge is keeping lots of people motivated to do less glamorous work, like organizing.

"Yes, one important question is whether activists will maintain this level of mobilization in the future," Banaszak said, adding that translating energy into "on-the-ground work" will be an ongoing challenge. But she also added that the existing political establishment should be thinking about how to combine forces with all these new voices.

"How the Democratic Party adapts to the influx of new activists will be important as well," Banaszak said. In a party that was split — to a damaging effect — in the 2016 presidential election, making sure everyone feels integrated will be a unique challenge. After its own fissures in 2010, the Republican Party brought in a crowd of Tea Party members. But even today, those splits within the party continue to make legislating difficult.

"I am always concerned about our ability to sustain our activist energy, but also old enough to know that even when movements appear to be dead (e.g. the Occupy movement), they're often just dormant and once again erupt when conditions are right," Schlack said in an email, pointing to Vermont Sen. Bernie Sanders' popularity in the 2016 Democratic primaries as proof.

Then again, even electing one major symbol of a "movement" — like Sanders or Massachusetts Sen. Elizabeth Warren — would not necessarily be a success to some former Occupy Wall Street supporters.

"I think that one of the things that's happened is we've changed basically our metric of success, so we have started calling things that are failures a success," said activist Micah White, co-creator of Occupy. "If you were an activist in the 18th, 19th and 20th centuries, success meant revolution in your lifetime. That's what it meant."

While people have cited the Fight for $15 campaign for a higher minimum wage and the increased dialogue about inequality as progress, White believes those are far too small of wins to consider the movement a "success."

To him, resistors like Women's March attendees should aim to get to a place where the movement, standing alone, can establish itself and win a political office — he points to Iceland's Pirate Party or Italy's Five Star Movement as examples.

And he thinks American women have the capacity to do that.

"For me, I absolutely believe that women will become the major force of the next great social movement."