Accessibility links
Book Review: 'The Electric Sublime,' By W. Maxwell Prince W. Maxwell Prince's bloody, silly and deeply likeable new graphic novel imagines a world where works of art are real spaces you can step into — with real problems that can cause hundreds of deaths. 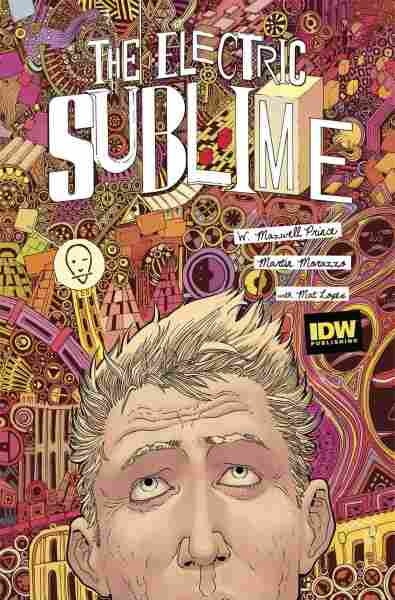 In a time when most types of government spending are under attack, a few brave souls have stepped up to defend those perpetually endangered hillocks of federally funded refinement, the National Endowments for the Arts and Humanities. The defenders haven't always managed so well. In a recent New York Times piece, Nicholas Kristof went so far as to argue that the august tradition of human cultural achievement should indeed be sustained because it has helped, somehow, to limit the practice of keeping hens in small cages. "The humanities have even reshaped our diet," he marveled.

Kristof is just the latest in a long line of commentators who've felt the best way to justify culture is to scrounge up concrete examples — however strained — of its impact on day-to-day existence. W. Maxwell Prince feels the same compulsion, but he's markedly more successful. Instead of constructing tortuous rationalizations involving chickens, he's created The Electric Sublime: a bloody, silly and deeply likable celebration of the life-or-death power of art in our lives.

Prince has been thinking a lot about that power lately. In last year's One Week In the Library, "the books [were] written in the very blood of the living stories held within." One of the library's titles featured a man who'd gouged out his own eyes, driven to despair by the staggering number of stories demanding to be read, the infinite possible truths to be grasped.

In The Electric Sublime, Prince imagines that art has the same power to annihilate. The title refers collectively to the worlds inside works of art: "countless very real, and very important, places, all made by geniuses and madmen." When something's wrong in the Electric Sublime, it leads to hundreds of deaths that must be investigated by the Bureau of Artistic Integrity. In one case, two homeless men beat each other to death over a picture of a can of tomato soup. In another, students in an amateur art class follow Matisse's dictum that a painter ought to have his tongue cut out. Time to call Art Brut! That's Arthur Brut, detective, a man with the power to inject himself into paintings. Soon, he's on the trail of a mysterious boy who can alter reality by drawing. Brut chases the lad through Seurat's pointillist parkland, Hopper's diner and the fragmented terrain of Guernica.

Of course, it's ultimately both sad and ironic that Prince feels the need to concoct a world where art can literally kill people.

Unfortunately, the artworks in The Electric Sublime don't get much more recent than that; Prince and his illustrators seem to think art stopped evolving sometime around the 1920s. True, cover artist Brendan McCarthy gives us a Jeff Koons bunny, but even that's a bit of a chestnut — and they just get nuttier. Munch's The Scream? Escher's steps? "Ceci n'est pas une pipe?" Come on, guys. How about injecting Art Brut into an Anish Kapoor or a Takashi Murakami?

Still, this problem doesn't sink the book. For one thing, you have to suspect Prince is deliberately choosing works his audience will remember from college art history classes or field trips to museums. It's understandable that he would reach out to readers through their favorite pieces. And in the end you have to like someone who loves art this much — however cobwebby his taste. Martin Morazzo's nimble lines and Mat Lopes' perky palette help too. Their adaptations of celebrated works, broken apart by the wars being fought within, are deft pastiches.

Of course, it's ultimately both sad and ironic that Prince feels the need to concoct a world where art can literally kill people. Can't we acknowledge that culture is awesomely powerful, a matter of life and death, without resorting to theatrics or gore — or, for that matter, the specious use of chickens? If you're a contemporary politician or New York Times columnist, apparently not. Whatever its flaws, at least The Electric Sublime is free of fowl — caged or no.