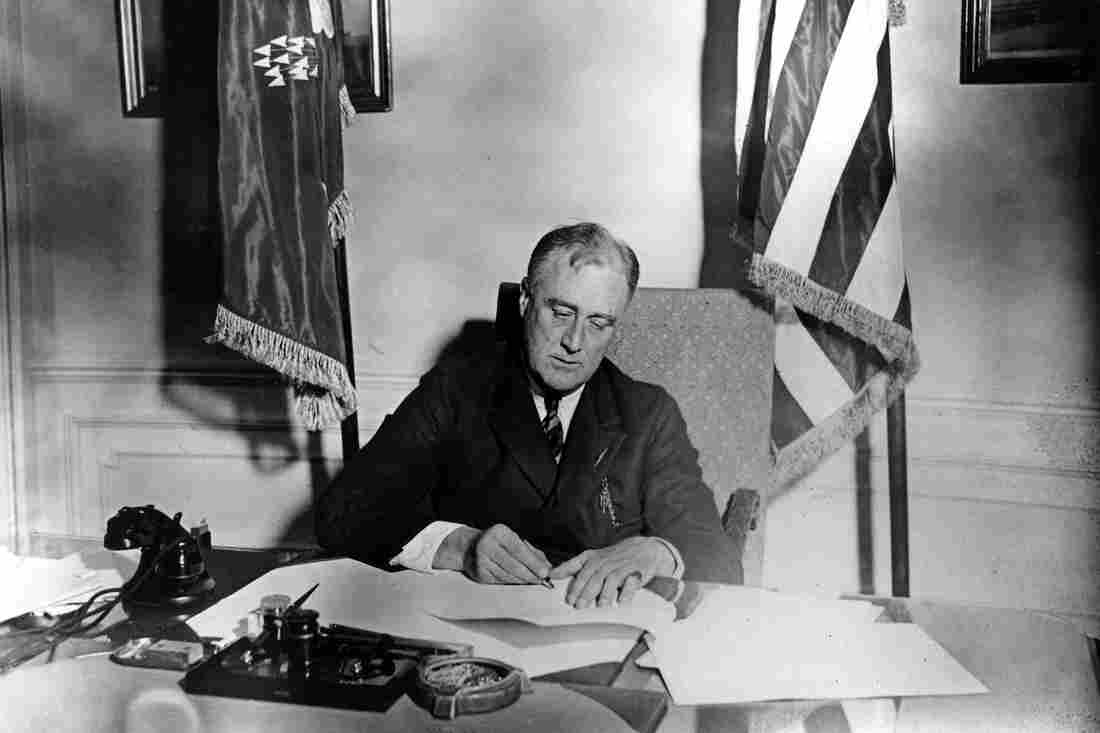 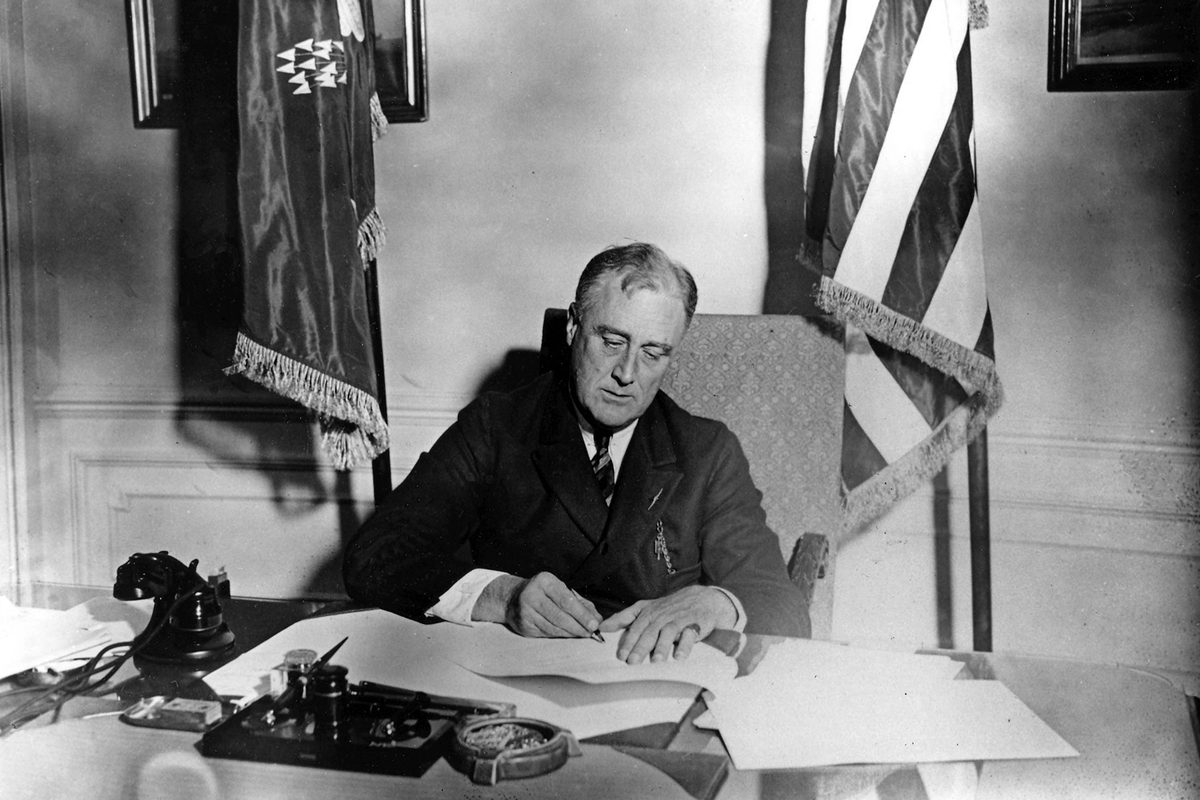 President Franklin D. Roosevelt signs the Emergency Banking Act into law on March 9, 1933. Roosevelt signed a record 15 major pieces of legislation in the first 100 days of his presidency.

The idea of measuring an American president by the accomplishments of his first 100 days in office goes back to 1933 and President Franklin Delano Roosevelt's dash to staunch a banking crisis and pull America out of the Great Depression.

In a July 24, 1933, fireside chat, he assessed the early months of his administration.

"I think that we all wanted the opportunity of a little quiet thought to examine and assimilate in a mental picture the crowding events of the hundred days which had been devoted to the starting of the wheels of the New Deal," Roosevelt said.

He had signed a record 15 major pieces of legislation in those first 100 days. But it's not as simple as the legend would make it seem.

"Presidents since Roosevelt have been held up to a standard that not even Roosevelt achieved," said historian Patrick Maney, a professor at Boston College who has written books about Presidents Clinton and FDR.

So Maney is on something of a quixotic mission to set the record straight. The idea of Roosevelt coming into office with a big agenda and a compliant Congress is a myth, he says. 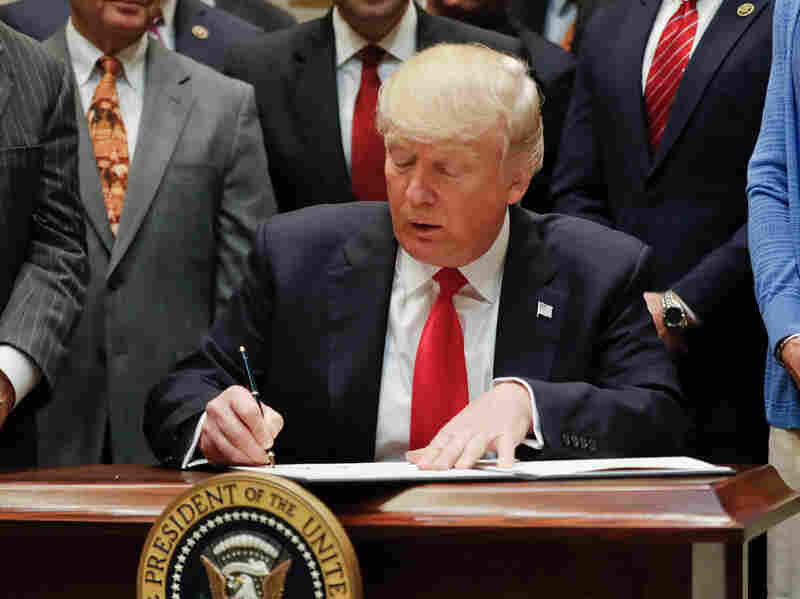 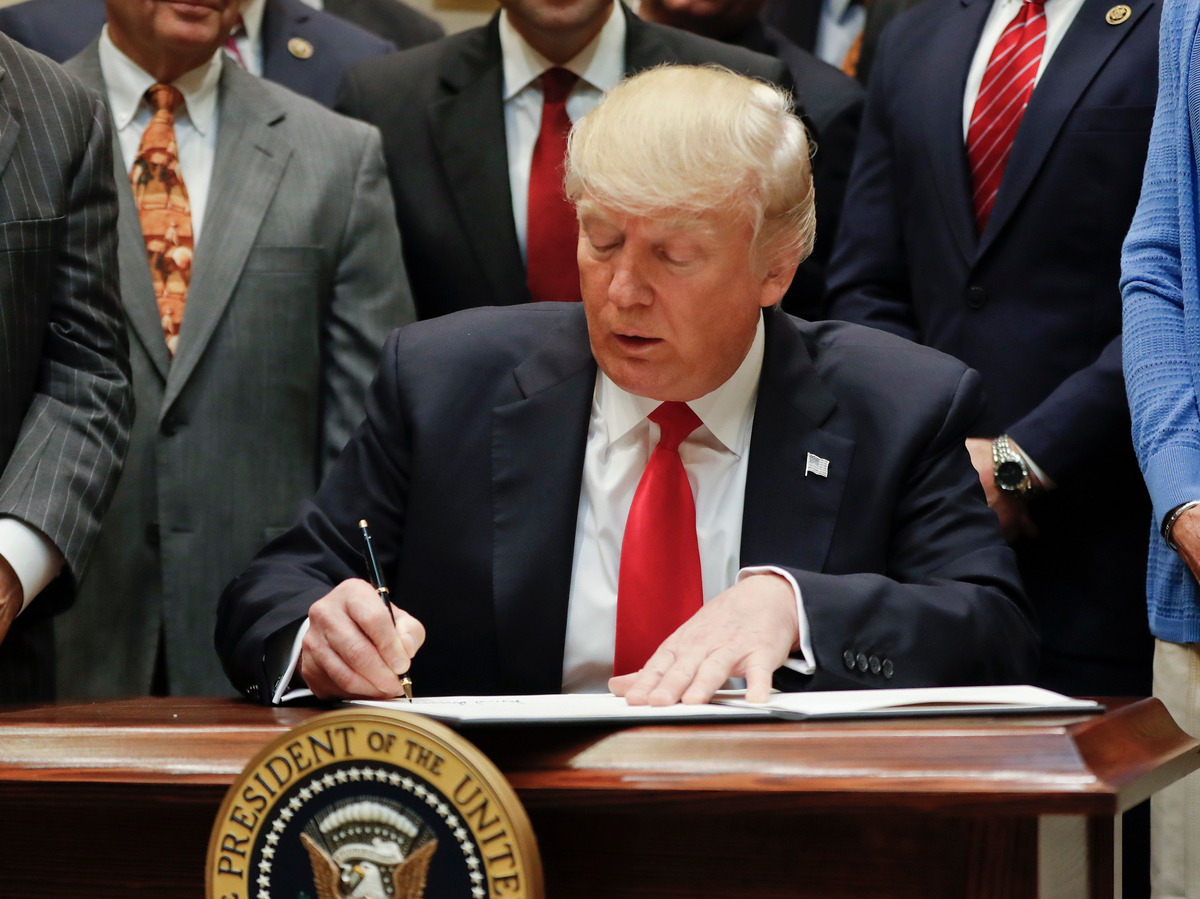 President Trump signs an executive order in the Roosevelt Room of the White House on Friday.

"Only two or, at most, three of those measures actually originated in the White House," Maney said of the 15 major pieces of legislation signed by Roosevelt. "Almost all the rest had originated in Congress and many — including federal relief for the unemployed, the Tennessee Valley Authority — had been up for debate for years."

Roosevelt, initially at least, opposed the creation of the FDIC. Now it is one of the enduring legacies of his first 100 days.

So in Maney's view it wasn't just about the president; it was about Congress too. And that's a lesson many presidents have learned over time — that their greatest domestic achievements come not from the White House but from their ability to work with the 535 people down at the other end of Pennsylvania Avenue. And often it takes a long time.

Put another way, the presidency is a long game. That's what President Kennedy argued in his inaugural address after laying out an ambitious agenda.

During his first 100 days, Kennedy authorized the failed Bay of Pigs invasion. Reagan was nearly killed in an assassination attempt after little more than two months in office.

Clinton's first 100 days were almost universally seen as a disaster. There were withdrawn nominations, an economic stimulus plan that died before it got off the ground and a debate over gays in the military that distracted from the rest of his agenda.

Yet, when Clinton left office eight years later, he had a 66 percent approval rating.

For President George W. Bush the first 100 days ended as a work in progress, with his education and tax legislation still awaiting congressional approval.

"We've had some good debates, we've made some good progress, and it looks like we're going to pass some good law," he said at a luncheon for lawmakers to mark the 100-day marker — though he had mightily resisted what he considered the arbitrary milestone.

At that point, the late journalist Daniel Schorr summed up Bush this way on NPR's Talk of the Nation: "If you say, what has he done in 100 days, not much."

Of course, Bush's time in office isn't defined by laws or taxes, but by events no one could have predicted at the end of his first 100 days.

No matter how much I accomplish during the ridiculous standard of the first 100 days, & it has been a lot (including S.C.), media will kill!

But that tweet belied a frantic effort by the president and his administration to prove they've had a successful first 100 days (complete with a press release describing his accomplishments as "historic"). The problem for Trump is not that he's come up short of Roosevelt, but that he's come up short of his own promises made during the campaign, with a specific reference to achieving those things within the first 100 days.