Accessibility links
Trump Plays Up Split-Screen As Master Producer Of 100 Days Milestone This president speaks from platforms of his own choosing, apart from the usual venues of power. Creating a split-screen on his 100th day in office, Trump could inhabit and speak to a separate reality.

Trump Stars On Stage He Built Himself, Far From Washington

Trump Stars On Stage He Built Himself, Far From Washington 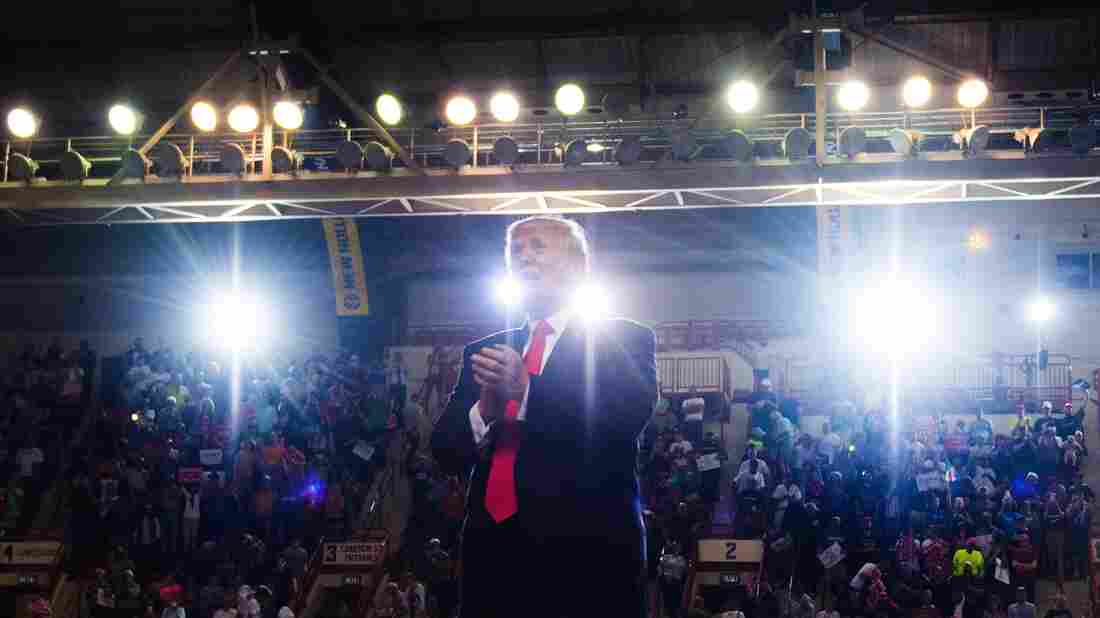 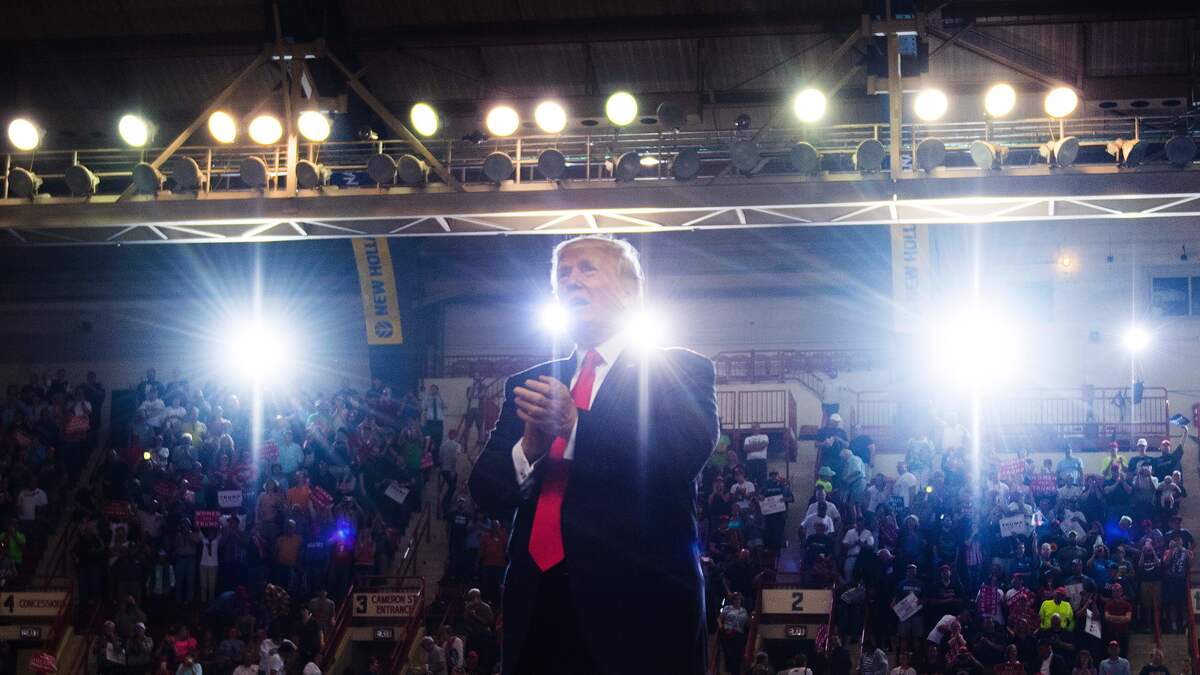 When we got up Sunday, we could hope our long national nightmare is over.

Meaning, of course, that we should finally be free of the obsessive chatter over Donald Trump's first 100 days in office.

After all, who cares about Day 101? Especially when, just last night, we witnessed such a marvelous metaphor for the Trump era, so far.

While official Washington was busy with the White House Correspondents Association's annual dinner – sometimes called "the nerd prom" – Trump was on a different stage in a different city with a very different crowd.

"I could not possibly be more thrilled than to be more than 100 miles away from the Washington swamp," Trump said, "spending my evening with all of you, and with a much much larger crowd and much better people."

For the record, there were rows that were visibly empty in the hall in Harrisburg, while the WHCA dinner was sold out as usual. But it didn't matter to Trump, who had his lines down without regard to what he saw before him.

He called out the dinner's "Hollywood people," of whom there were far fewer than in years past. But the jibe highlighted the contrast between the WHCA's recent glamour fixation and Trump's own evening with the salt of the earth.

It was a visible contrast to be beamed to the nation on split-screen TV. On one side you could see the capital's elite in black ties and ball gowns. On the other: the people's president before a throng of thrilled Pennsylvanians — "the forgotten man and forgotten woman" of the heartland.

There could have been no better way for the president to say and to show: "I'm not with them, I'm with you."

The president had constructed a stage for himself far from the confines and dictates of the capital city he has occupied but not conquered. From that stage he spoke to the Americans who respond to his mix of nostalgia, alienation and recaptured confidence.

So it is with the Trump presidency to date. He speaks from platforms of his own choosing that stand apart from the usual venues and avenues of power. Be they virtual or digital, they enable him to inhabit and speak to a separate reality.

All presidents now must govern largely via the media, but Trump is perhaps the first to be quite so governed by it – so defined by a media vision of the world.

He lives in that conception more than inside the governmental structure he heads, and that suits both him and his support base just fine.

In Harrisburg, it was possible for the president to mock the obsessions of the media, such as the 100 days milestone he has previously called "ridiculous." He could say his first months in office had seen more achieved than any similar period in history. He could say he had done more than any previous president.

He could talk once again of repealing and replacing Obamacare with something that will be "wonderful." He could promise again a great wall between the U.S. and Mexico. He could speak of bringing back millions of manufacturing jobs lost to global competition (if not the millions more lost to automation).

He could promise a tax cut for everyone. And he could put the world on notice that the U.S. will insist on serving its own interests in every dispute and conflict, be it economic or military.

For an hour on the Harrisburg stage, there was no investigation of Mike Flynn, Trump's first national security advisor. There was no power struggle with the leaders of Congress, no war within the West Wing inner circle, no unease with leaders of foreign allies and adversaries alike.

In short, on his own stage, Trump was still the star of the campaign trail, untroubled by the realities of the office he won or the complicated nature of the shared-power system in which he now serves.

The crowd, not quite so large or as boisterous as a year ago, still embraced the man who calls himself their "true hero in the White House."

This master stroke of counter-programming typifies the strengths of the Trump style in office. If critics pounce on a controversy or a failure of some kind, the president can convey his side of the story via selective interviews and predawn tweet-storms.

These means of messaging circumvent the usual carriers of information and commentary that we know as the media. This allows the White House to communicate without the usual interference. And if that means the mainstream media have to fume and stew in their juice, so much the better.

In a similar strategy, the president has made extraordinary use of executive orders. These instruments allow the president to dial up a change in national policy without actually passing or amending any laws. All presidents have used such orders, although usually for relatively small matters or after first trying to change the law.

Trump can claim to have issued more executive orders than any president since Harry Truman (a rather populist "man of the people" in his own right). The new president says he has also signed 28 bills into law, although it is difficult to find anyone who knows what any of them were about.

Far larger issues have been addressed by Trump's executive actions. Among the biggest: immigration (banning entry for those from seven predominantly Muslim countries), energy (the Dakota Access oil pipeline, regulations on coal and other fossil fuels) and so-called "sanctuary cities" that resist federal policy on deportation.

Executive orders can be overruled by Congress, although it seems unlikely this Congress would do so. They can also be suspended by rulings from the federal courts, and this has already happened with regard to the immigration ban and sanctuary cities.

The big emphasis on executive orders and bill signings was pushed by the White House in late April after an effort to downplay the 100 days milestone failed to break the media fever over it. As the number of days reached the 90's, the president's team swung into action, urging Congress to do the same.

In the final week, the president's team tried to tackle the repeal of Obamacare (despite Congress' resounding failure on this front in March), to get money for the border wall and to introduce the president's overhaul of the tax code.

The only real business that had to be done before April ended was an extension of spending authority so the federal government could keep operating. But that little housekeeping item was actually held hostage for a time as the White House insisted on another health care vote and money for the wall. Congressional Democrats came back with counter-demands of their own, tensions rose – and the White House backed off.

Now the president says his wall can be worked out in the fall. Obamacare will be around to be repealed when the votes are there. The tax code, well, details are in development.

As the week ended, the government was still open. Trump signed an extension for another week. None of the bigger issues had been resolved, and all will be back next week. And the week after that.

"I thought it would be easier," the president famously confessed to Reuters on Thursday.

We can all doff our caps to that.

This might have ended as a week of frustration epitomizing the first three months of the 115th Congress and the Trump regime. The polls have not been kind to the new president, with most showing his approval rating several points below his share of the vote last November and some showing it below 40% (a traditional danger zone for presidents at any stage of their term).

While few would have expected Trump to deliver a wall overnight, or tame North Korea's nuclear ambitions with a tweet, there had been expectations for the repeal and replacement of Obamacare.

Was President Trump invited to the dinner back in his adopted "home" town? Of course he was. The dinner, which has been around for a century, has always been designed to honor the president. But this president chose not to attend, scoffing at one more Washington taboo.

Some have read this as revenge for the merciless jokes made at his expense at previous WHCA dinners. One in particular, in 2011, featured a long putdown of Trump's NBC-TV show The Celebrity Apprentice, delivered by none other than President Obama himself.

That year's after-dinner comic, Seth Meyers, said he was amazed to hear Trump might run for president as a Republican. "I always thought he was running as a joke," said Meyers. Cameras caught Trump at the NBC table with a tight little smile and, no doubt, thoughts of his own.

Some thought this, the first nerd prom since own electoral triumph, would be irresistible for Trump — the payback opportunity of a lifetime. But the president seems once again to be his own best producer, as well as the star of his own show.

He said "I'm with you" from the stage at the Republican convention in Cleveland last July. It had to be sweeter yet to say it in Harrisburg after 100 days, leaving all with that split-screen image to preserve and ponder.