Accessibility links
Not My Job: We Quiz Director Guy Ritchie On Locks, Stocks And Barrels Ritchie wanted to be a filmmaker, so he dropped out of school at the age of 15 — why waste time? His first film, Lock, Stock and Two Smoking Barrels was a breakout independent hit. 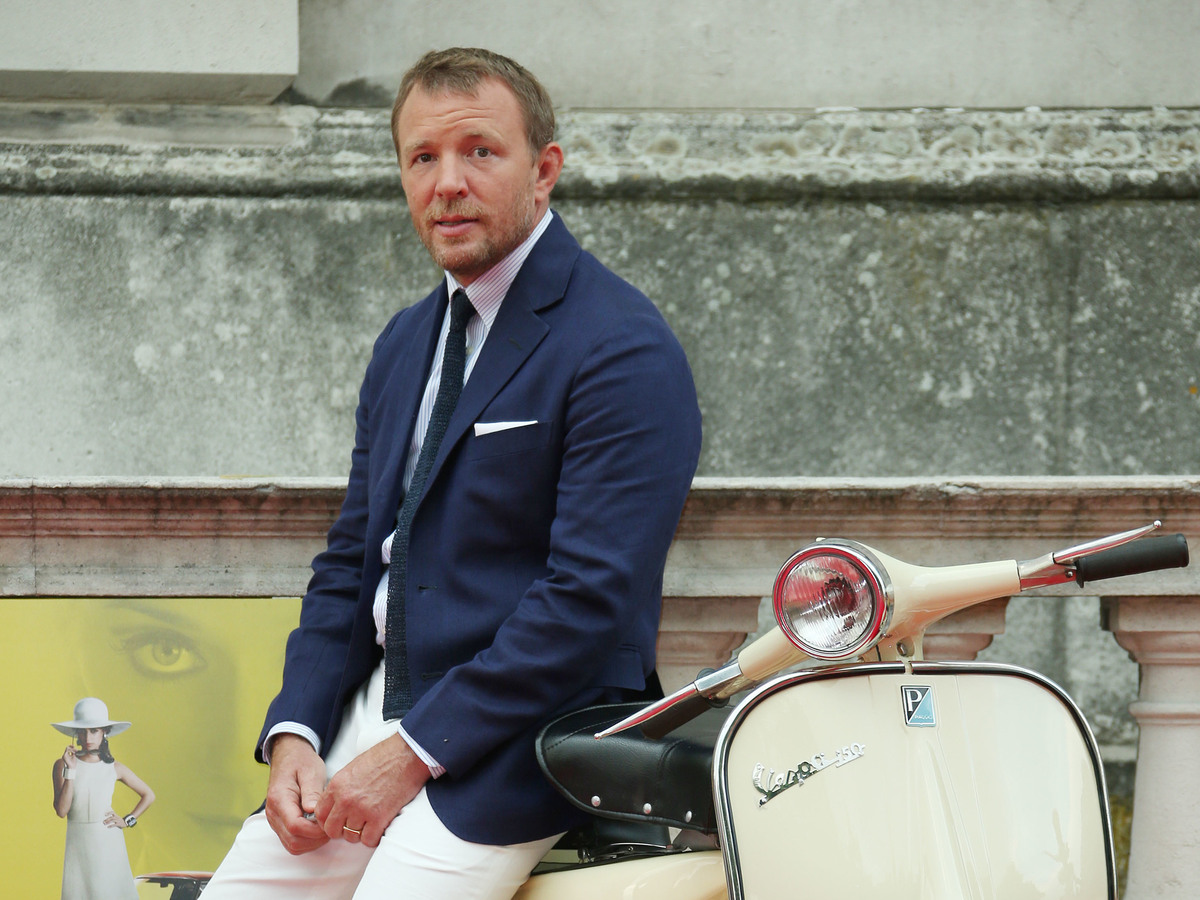 Guy Ritchie wanted to be a filmmaker, so he dropped out of school at the age of 15 — why waste time? His first film, Lock, Stock and Two Smoking Barrels was a breakout independent hit, and led to a bunch of other movies, including Snatch, Swept Away, and two Sherlock Holmes films. His latest movie is King Arthur: Legend of the Sword.

We'll quiz Ritchie on locks, stocks and barrels. Click the listen link above to see how he does.

And now the game where cool people try their hand at something kind of lame. So Guy Ritchie wanted to be a filmmaker, so he dropped out of school at the age of 15 to go do it. You know, why waste time? His first film, "Lock, Stock And Two Smoking Barrels," was a breakout hit. It's led to a bunch of other movies, including "Snatch," "Swept Away," the two Robert Downey Jr. "Sherlock Holmes" films. His latest movie is "King Arthur: Legend Of The Sword." It opens soon. We are delighted to have him here. Guy Ritchie, welcome to WAIT WAIT... DON'T TELL ME.

SAGAL: So before we go any further, is that true? You dropped out of school at 15 to go be a filmmaker?

GUY RITCHIE: Well, I certainly dropped out of school at 15. I'm not sure if I was so focused as to thinking about being a filmmaker at the time.

SAGAL: Right. What were you focused on?

RITCHIE: Dropping out of school.

SAGAL: I understand. That was the priority. So you - so let's see. You were 15 years old. You dropped out of school. What did your parents think of that?

RITCHIE: Well, it was more the school's idea than it was my idea.

SAGAL: All right, so you're 15 years old. You're having terrible problems in school. You drop out. What do you do?

SAGAL: And that worked out well for you then, sir?

RITCHIE: It didn't work out very well, actually, hence I'm not doing it any longer.

SAGAL: Yeah, I see. Yeah. This is an inspirational story so far. How do you go from a 15-year-old school dropout - and were you living in London at the time?

RITCHIE: I was living in London.

SAGAL: Really? I mean, you were an unsuccessful drug dealer?

RITCHIE: It's very hard to be a successful drug dealer, as I found out.

SAGAL: Yeah, I guess so.

PAULA POUNDSTONE: I think that is such a great name for an autobiography, I was poo at selling drugs.

SAGAL: So what I'm beginning to understand is the - I'm thinking of your first film, "Lock, Stock And Two Smoking Barrels," which is about guys, shall we say, who aren't very good at making a legitimate living living in London. You came by those stories honestly. Is that what you're saying?

RITCHIE: It was an autobiography.

RITCHIE: Well, I mean, I didn't start seriously until I was 25. If there's one piece of advice I would give anyone it is do not sweat until you're 25. There seems to be something that takes place in the brain at 25 when you've had a quarter of a century of arsing around, learning about life.

RITCHIE: And all of that anxiety I went through from 15 to 25 was wasted. I just think at 25 get serious. And up until then don't be.

SAGAL: Right. And that worked out well for you.

LUKE BURBANK: Can we hit pause so I can make sure my 23-year-old daughter isn't listening to this, Peter?

SAGAL: So here you are. You're working your way up in the film industry. You made a short film and somebody saw it, right? Is that the story, that somebody influential saw it and helped you make it into a feature?

RITCHIE: Some version of that.

RITCHIE: I was so - at last I'd found a vocation in life.

SAGAL: When you - wait a minute.

POUNDSTONE: Wait a minute. Back up.

RITCHIE: You'll be surprised in the U.K.

SAGAL: They're particular about their tea, I'm told.

RITCHIE: They are particular about their tea.

SAGAL: I understand. So you made the film "Lock, Stock And Two Smoking Barrels." How did your life change when that movie became this breakout hit?

RITCHIE: I have to tell you it did change.

RITCHIE: It did change because up until then the most amount of money I had ever earned was about $250 a week.

RITCHIE: And over the weekend, I became - and I'm desperately really trying not to sound like a cock when I say this.

SAGAL: And by that you just mean a rooster. A...

RITCHIE: I don't want to sound like a rooster.

RITCHIE: But, you know, I made millions of dollars over a weekend.

SAGAL: Yeah. Did you find that your 10 years or so of living, you know, rough, making very little money and scrambling from job to job, did that prepare you well for being successful? Or when you were successful you were like, ha ha and you behaved irresponsibly because finally you had money.

RITCHIE: Well, you know the answer.

SAGAL: Now that you're - now that you're a nice mature guy and you're married with kids, do you still ever sort of get into the kind of crazy stuff you used to when you were a young man researching "Lock, Stock"?

RITCHIE: I'm sitting opposite my wife who's grinning at me.

SAGAL: Well, I understand. Well, I'm sure - I'm sure then that the answer is absolutely not. Well, Guy Ritchie, we have invited you here to play a game we're calling...

SAGAL: As we have discussed, your first breakout film was "Lock, Stock And Two Smoking Barrels." But we noticed in that very excellent film a strange lack of locks and stocks in them, although the barrels - they're there, but they don't really smoke. So we thought we'd ask you about the real things. Answer two out of these three questions about locks, stocks and barrels, you'll win our prize for one of our listeners, Carl Kasell's voice on their voicemail. Bill, who is director Guy Ritchie playing for?

SAGAL: All right, first question. Locks, of course, are the concern of thieves. In 1971 in Delaware here in the U.S., thieves managed to defeat the locks in an office they wanted to break into by doing what - A, disguising themselves as potted plants and having themselves delivered to the offices before closing; B, using a highly trained ferret to go in, retrieve a key and bring it back; or C, putting a note on the door that read, please don't lock this door tonight?

SAGAL: You are, in fact, right. The answer really was C. But I admire you for going for the one you pleased. Yeah. That's what they did. They put a note in the door that said, please don't lock the door. The door wasn't locked. They walked right in.

SAGAL: All right, next, stocks. Stocks, of course. There are some unlikely successes playing the stock market, as in which of these - A, the color method, which invests in companies who have shades of green in their logo because money is green - at least it is here; B, Orlando the stock-picking cat, who outperformed professionals by 60 percent one season a few years ago; or C, a Roomba robot vacuum which was allowed to roam over a blown-up stock table and investments made wherever it stopped to clean?

RITCHIE: I mean, who can resist the lock-picking pussy?

SAGAL: I can't. And you're right. Orlando the stock-picking cat beat many professional investment advisers.

RITCHIE: I'm good at this game.

SAGAL: I'll say you're getting better. Barrels - that's the last one - are sometimes involved in important legal disputes, it turns out, such as which of these - A, a man sued his neighbor in Ontario for constantly singing "Roll Out The Barrel" really loudly in the middle of the night; B, there was a U.S. Supreme Court case called United States v. Forty Barrels of Coca-Cola; or C, a landlord in San Francisco was charged with fraud for advertising an old wine barrel as a, quote, "affordable efficiency apartment"?

RITCHIE: It's boringly going to be B.

SAGAL: Oh, well, gee, everybody's a critic. God. You're right, but we thought it was amusing that there was a...

SAGAL: We thought it was amusing.

SAGAL: This was back in 1905, back when the U.S. government sued Coca-Cola because they wanted Coca-Cola to stop putting this horrible drug in their beverage called caffeine. And so because of some vagary of the law the case was a lawsuit against the product itself, U.S. v. Forty Barrels of Coca-Cola.

ROBERTS: In the barrels.

SAGAL: Yeah, there you are. Isn't that fascinating?

RITCHIE: It is fascinating.

RITCHIE: It's fascinating how good at this game I am.

POUNDSTONE: I wish we had...

POUNDSTONE: I wish we had more questions for him.

BURBANK: ...For somebody whose brain didn't turn on till 18 you're pretty smart, Guy Ritchie.

SAGAL: Well, he - because he kept it for so long without using it he hasn't worn it out as much as we have.

SAGAL: Bill, how did Guy Ritchie do on our quiz?

KURTIS: Well, he did the impossible and we're really impressed. He got them all right.

SAGAL: I hope - all I can say is I hope this is the beginning of a very successful awards season for you.

RITCHIE: (Laughter) What I do know is my wife thinks a lot more of me now.

SAGAL: That's what we're here for.

POUNDSTONE: Boy, she is a pushover.

SAGAL: Guy Ritchie is the director behind "Snatch," "Lock, Stock And Two Smoking Barrels." His new film, "King Arthur: Legend Of The Sword," opens next week. It is a thrill ride. Go see it. Guy Ritchie, thank you so much for joining us.

SAGAL: In just a minute, Bill gets a whiff of our founding fathers in the Listener Limerick Challenge. Call 1-888-WAITWAIT to join us on the air. We'll be back in a minute with more of WAIT WAIT... DON'T TELL ME from NPR.