Accessibility links
President Trump Proclaims May 1 Loyalty Day: Here's The History Behind That The day has been marked annually since 1955, but America's presidents describe loyalty in markedly different ways. 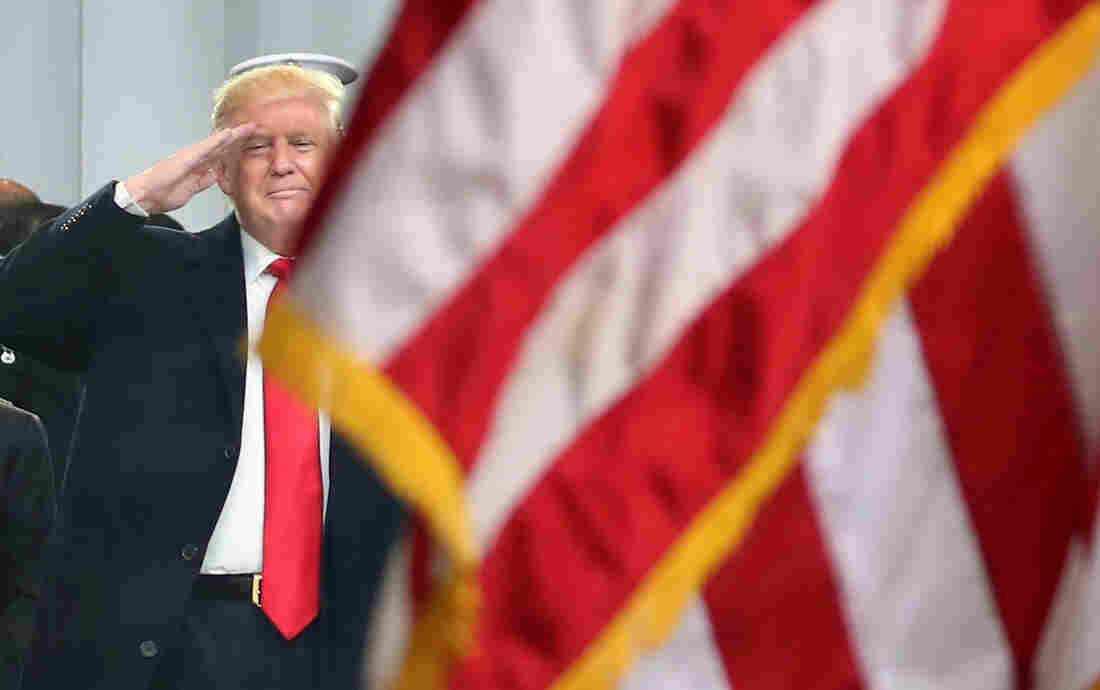 President Trump, seen saluting an American flag during his inaugural parade, issued a statement in honor of Loyalty Day on May 1, as many presidents have before him. Mark Wilson/Getty Images hide caption 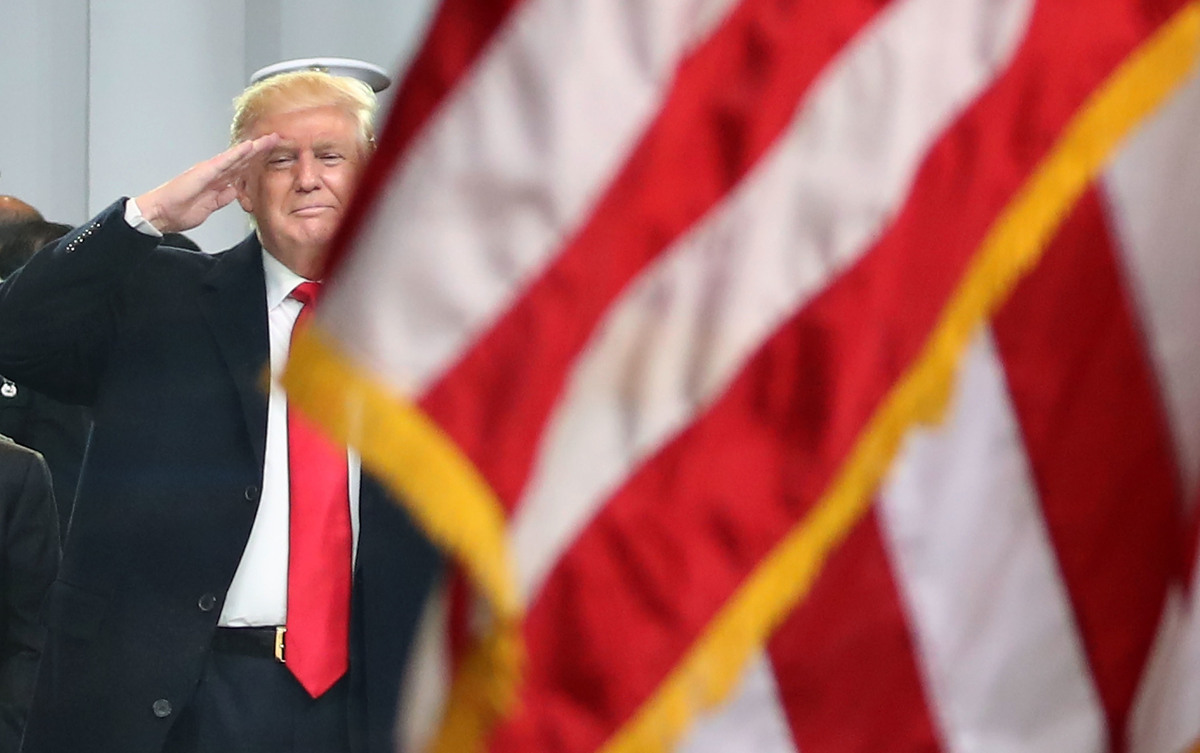 President Trump, seen saluting an American flag during his inaugural parade, issued a statement in honor of Loyalty Day on May 1, as many presidents have before him.

In proclaiming May 1 as Loyalty Day, President Trump described it as a day meant "to express our country's loyalty to individual liberties, to limited government, and to the inherent dignity of every human being."

The proclamation further describes the American values and "unique heritage" the president intends the day to honor:

"As one Nation, we will always stand strong against the threats of terrorism and lawlessness. The loyalty of our citizenry sends a clear signal to our allies and enemies that the United States will never yield from our way of life. Through the Department of Defense and other national security agencies, we are working to destroy ISIS, and to secure for all Americans the liberty terrorists seek to extinguish. We humbly thank our brave service members and veterans who have worn our Nation's uniform — from the American Revolution to the present day."

Trump's mention of ISIS may seem unusual in a proclamation for a day meant to highlight national pride and American values, but it is part of a long tradition of presidents (or their staff who write the proclamations) tying this little-known holiday to the threats of the time and bringing their own views to the idea of loyalty.

Despite some initial alarm on Twitter, Loyalty Day is not unique to President Trump. In fact, it's been around for decades.

In 1955 Congress passed a resolution designating May 1 of that year as Loyalty Day. It was the height of McCarthyism and an anti-Communist red scare in America. A Christian Science Monitor article from the time said the congressional resolution was "aimed at off-setting Communist May Day rallies around the world."

Three years later, Congress weighed in again to make it an annual affair, "set aside as a special day for the reaffirmation of loyalty to the United States of American and for the recognition of the heritage of American freedom." It called for president to sign a proclamation each year calling for the display of the American flag and inviting observances at schools and "other suitable places."

From the Government Printing Office, the law passed in 1958 annually designating May 1 as Loyalty Day.

Reflecting Challenges Of The Day

In his first Loyalty Day proclamation, President Dwight Eisenhower referred to an "unswerving devotion" to the liberties enshrined in the Constitution.

"Whereas the prime requisite for retaining our freedom is unswerving devotion to the liberties embodied in our Constitution; and

"Whereas it is fitting that a special day be set aside for solemn re-evaluation of those priceless gifts of freedom which are our heritage, to the end that we may stimulate and renew that high sense of patriotism which has signalized our glorious history as a Nation;"

Four days before the botched invasion of Cuba known as the Bay of Pigs in April 1961, President Kennedy's Loyalty Day proclamation emphasized standing up to totalitarianism.

"Whereas we as a people enjoy the blessings of a free democratic society in a world threatened by the forces of totalitarianism; and

"Whereas steadfast devotion to our country and our Constitution is indispensable to the preservation of our freedom and liberty;"

Kennedy's 1963 Loyalty Day proclamation was further colored by the Cold War footing of the nation. "Understandably, our people avoid ostentatious displays of patriotic fervor. Nevertheless, in these trying times, when international forces are attempting to undermine and destroy our form of free government and our way of life, it is entirely fitting and proper and in the national interest to set aside a special day each year on which to express our unceasing devotion and loyalty to this Nation," the proclamation read.

In 1967, President Lyndon Johnson began his Loyalty Day proclamation, describing the anti-communist history of the day.

"May 1st, in some parts of the world, is marked by demonstrations in support of totalitarian party dictatorships. Since 1959, we in the United States have celebrated it as 'Loyalty Day,' a time when we are asked to recall the ideals which have nourished our free society.

"The contrast between these two types of celebration is striking. We are not demanding unthinking fealty to a party or a doctrine. On the contrary, allegiance to American ideals demands commitment to a ceaseless search for new routes to freedom, justice and equality."

Johnson's proclamation that year goes on to point out America is a nation "where the rights of minorities are respected as fully as the rights of the majority."

"To an American, then, loyalty is not automatic acceptance of authority but consecration to the principles of a free society.

"It imposes restraints on the majority and on minorities alike. The majority must have the right to act, but its actions must follow the course of due process.

At the time, American service members were dying in increasing numbers in the Vietnam War and the anti-war movement in the U.S. was intensifying. Dissent was on full display, as was the sacrifice of those serving the nation.

An Emphasis On The Individual

"Loyalty to our country and its flag must rest on understanding of our great national values which they have represented — individual freedom under the law, equality of opportunity in all walks of life, justice and protection of the law for all. Each of us has an obligation to fulfill these ideals and to preserve them for our children and for succeeding generations."

"Loyalty Day, May 1, is a day we set aside to promise allegiance to our country; to revere our heritage of individual freedom, limited government, and respect for every man's divinely bestowed dignity; and to reaffirm our sacred trust to preserve, for our children and for all generations to come, this blessed land of liberty we call America."

But in Reagan's first Loyalty Day proclamation, back in 1981, he emphasized the diversity of the country.

"One of the great treasures of America is the unity of its people. No nation is composed of citizens with such diverse cultural, racial and religious backgrounds as is the United States of America. And while the unique contributions of each segment of our population are important, the significant fact remains that each of us, whatever background, remains loyal to the Nation and to the ideals of freedom for which it stands."

"While ours has always been a large and complicated democracy, full of differing views and boisterous debates, our history also makes clear that we are strongest when we find in our diversity a deeper, richer unity, stemming from an overarching belief in the possibilities our shared future holds. This Loyalty Day, let us remember that what defines us as one American people is our dedication to common ideals — rather than similarities of origin or creed — and let us reaffirm that embracing this truth lies at the heart of what it means to be a citizen. As long as we stay true to that mission and uphold our responsibility to deliver a freer, fairer Nation to the next generation, a future of ever greater progress will remain within our reach."