Accessibility links
President Donald Trump Asked If Andrew Jackson Could Have Prevented the Civil War, Here's the Answer In an interview that aired Monday, President Trump spoke highly of Andrew Jackson, and wondered why more people don't ask why the Civil War happened, asserting Jackson could have prevented it. 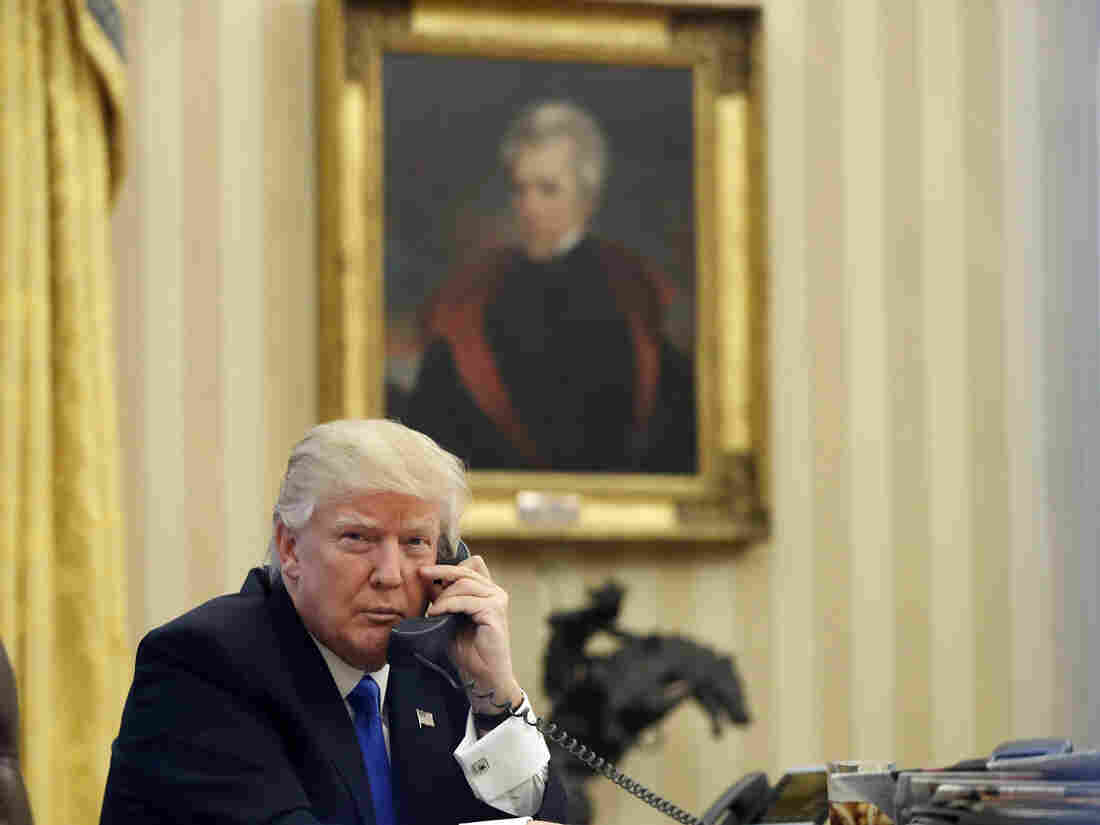 President Donald Trump speaks on the Oval Office telephone in January, as a portrait of former President Andrew Jackson hangs in the background. In an interview published Monday, Trump wondered aloud about whether the Civil War would have happened had Jackson been alive in the 1860s. Alex Brandon/AP hide caption 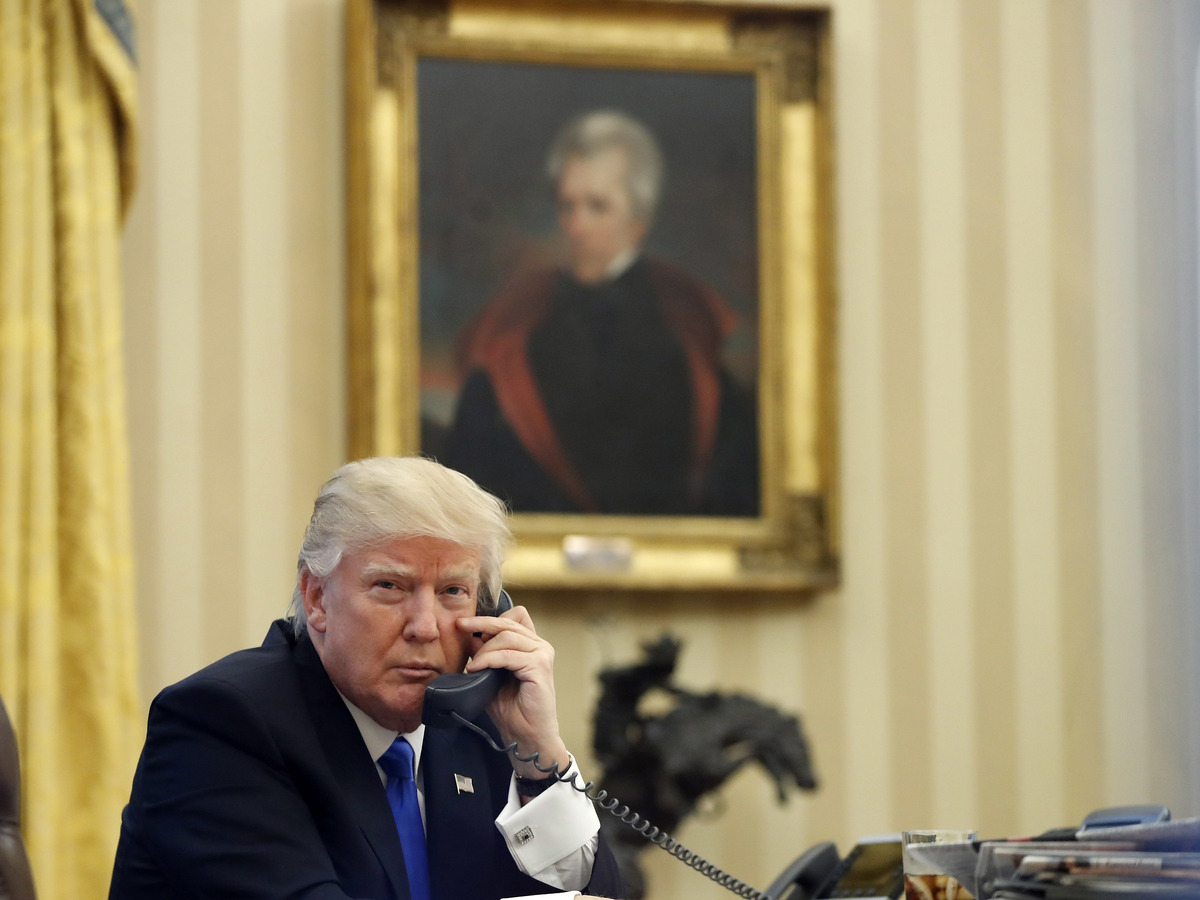 President Donald Trump speaks on the Oval Office telephone in January, as a portrait of former President Andrew Jackson hangs in the background. In an interview published Monday, Trump wondered aloud about whether the Civil War would have happened had Jackson been alive in the 1860s.

In an interview on SiriusXM Monday afternoon, President Donald Trump wondered aloud about why the Civil War wasn't "worked out" and whether Andrew Jackson, who died 16 years before the war started, could've prevented the bloodiest war in U.S. history.

"Had Andrew Jackson been a little bit later, you wouldn’t have had the Civil War" @realDonaldTrump told @SalenaZito. Full intv at 2pE, Ch124 pic.twitter.com/d7PuRRm7Md

Trump visited Jackson's estate last month in Tennessee, and many have drawn comparisons between the two. Trump obviously likes the parallel, even going so far as to have a portrait of Jackson hung in the Oval Office.

Trump also pondered why more people don't ask "why was there the Civil War?"

NPR Morning Edition Host Steve Inskeep wrote a book about Andrew Jackson in 2015, called Jacksonland, so I reached out to him via email today for some context.

This interview has been edited lightly for clarity.

Q: I think we need to unpack the main quote here: "People don't realize, ya know, you think about it – why? People don't ask that question, but why was there the Civil War? Why could that one not have been worked out?"

I guess the obvious question is, do you think people don't ask that question? What do you make of this?

Inskeep: People have asked this question regularly since 1861. Even President Trump has asked the question before. Nevertheless, it's a good question to ask, which is why so many people do ask. We'd hate to have another Civil War, so it's good to learn about it. Why wasn't the Civil War worked out? The story of Andrew Jackson actually helps to explain this.

The President said that he thinks if Jackson had "been a little bit later, you wouldn't have had the Civil War." Give some context here, do you think that's true?

This much is true: Andrew Jackson, who was president from 1829-1837, helped to avert a plausible civil war, generations before the actual one. In the 1830's, South Carolina insisted on its right to nullify, or ignore, federal law. The South Carolinians objected to taxes — federal tariffs on the imported goods they were buying from Europe.

Jackson insisted that federal law reigned supreme. Through a carefully calibrated mixture of threats (a warship actually appeared in the harbor at Charleston, ready to open fire if need be) and compromises (Congress cut the tariff a little), he persuaded the nullifiers to back down.

But this is also true: Jackson never questioned the underlying, fundamental difference between North and South, which was on slavery. He didn't actually disagree with his fellow Southern leaders about that issue.

It was much, much harder to compromise as the Civil War broke out in 1861, because the nation was more squarely confronting that issue. Northern votes had just elected Abraham Lincoln, a president from an allegedly radical new party that insisted that slavery was wrong and must be contained to the South.

Southerners saw this as a threat to their property, and tried to secede from the Union. From the very beginning the South tried to obscure what the conflict was truly about, citing state rights, Southern theories of liberty, or the economic oppression of the North; but the Confederate vice president, Alexander H. Stephens, made it plain in a speech: the United States was in "error" to believe in "the equality of the races," and the Confederacy aimed to build on a different foundation.

People did try, desperately, to "work out" that problem before the shooting started in 1861, but it was in the end an irreconcilable difference.

Andrew Jackson owned slaves that worked on his plantation in Tennessee. What were his views on slavery and how do those views square with Trump's characterization of him as someone with "a big heart?"

He bought his first slave, a young woman, when he was barely an adult. He also traded in slaves. From his late forties onward, he actually owned slaves who worked multiple plantations as he built a little empire of cotton land in Tennessee and Alabama.

Sometimes slaves escaped, and he advertised for their return. At least once he went hunting for escaped slaves himself. It is said, correctly I think, that he was not a pro-slavery ideologue; he just accepted slavery as the custom of his time.

But as president, his governing coalition, which became the Democratic Party, included Southern slave interests, and Jackson never messed with them. He even allowed Southerners to censor the U.S. mail to keep "dangerous" antislavery publications from reaching slave states.

So did he have a "big heart"? Some of his biographers think so. He was said to be a gentle master; there were scenes of slaves crying when he died; and one writer even called him "an ideal slave owner." However, he was never so kind to his slaves as to free them.

Jackson behaved similarly toward Indians: making friends with them, but never stopping his efforts to obtain their land for the United States. Maybe it's best to say that Jackson had a "big heart," except where his economic or political interests were at stake.

Andrew Jackson died 16 years before the war started in 1861, but how did his legacy play into the fact that conflict started?

Jackson lived on, in a way, into the Civil War. He was famous for preserving the Union in the 1830s.

As Abraham Lincoln led the Union to ultimate victory and the abolition of slavery 30 years later, he apparently liked Jackson's powerful example. He, like Trump, kept a portrait of Andrew Jackson on his wall. Of course Jackson, however, never favored abolition. But history is complicated, and it is all our legacy, even the parts we dislike.

Trump mentions in this interview that his Presidential campaign and subsequent November win were most like Andrew Jackson's in 1828. Would you say that's a fair comparison? What parallels and differences do you see between Jackson and Trump?

2016 was actually more like 1824. In that year, the political world was divided and nobody knew which way it would go.

Andrew Jackson was one of four candidates who divided the popular and electoral votes. Jackson got the most popular votes - but when the election was thrown to the House of Representatives, the House chose the popular vote loser, John Quincy Adams. It was a perfectly legal result, but one that Jackson branded as unfair and undemocratic.

Jackson then went on to win a landslide in 1828. Obviously, Trump would much rather be like Jackson in 1828, proclaiming a new democratic era. But his vote results position him more like the John Quincy Adams of 1824, who won the presidency legally, but in a way that his critics called unfair.