Accessibility links
Writers Guild Of America Reaches A Tentative Deal With Studios A writers' strike was narrowly averted Tuesday, as a tentative three-year pact was reached between members of the Writers Guild of America and the Alliance of Motion Picture and Television Producers. 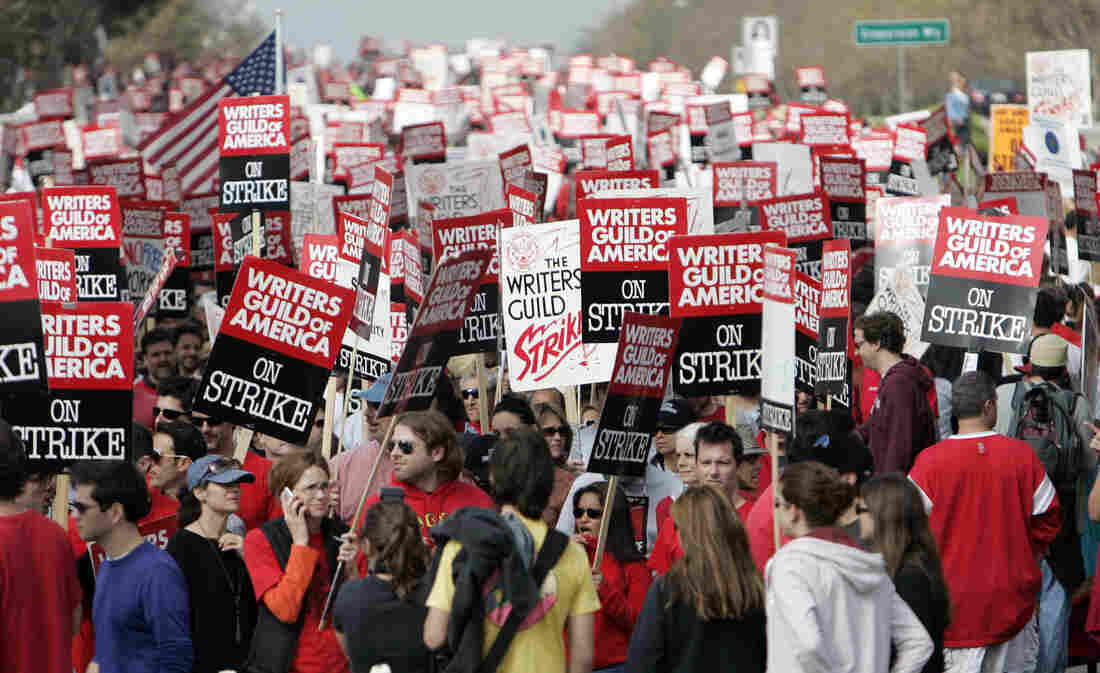 In 2007, the Writers Guild of America went on strike over revenues from Internet and DVD sales. Above, writers and supporters march in Los Angeles on Nov. 9, 2007, the fifth day of the strike. Reed Saxon/AP hide caption 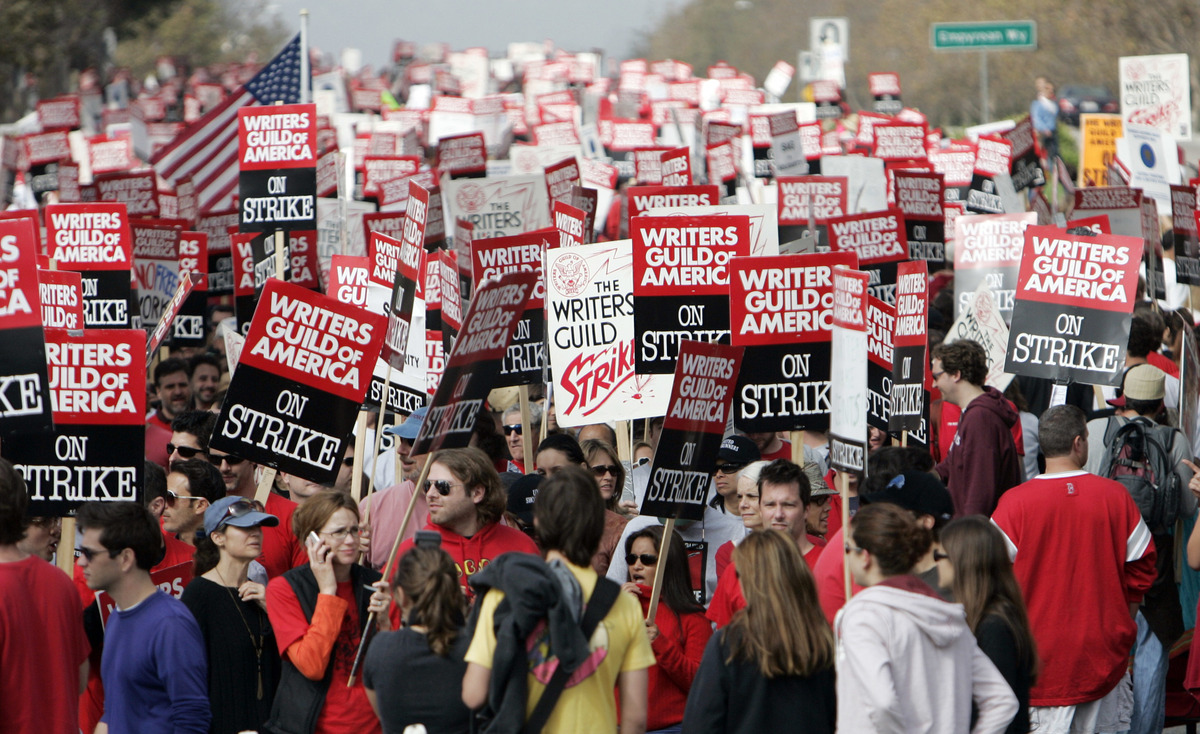 In 2007, the Writers Guild of America went on strike over revenues from Internet and DVD sales. Above, writers and supporters march in Los Angeles on Nov. 9, 2007, the fifth day of the strike.

Hollywood has solved another cliffhanger. A massive writers' strike was narrowly averted Tuesday, as a tentative agreement was reached between the members of the Writers Guild of America and the group representing the studios they work for, the Alliance of Motion Picture and Television Producers.

It's Not Just Hollywood Writers Who Lose Out During A Strike April 30, 2017

Details of the deal are expected to be provided to members on Thursday. Around 13,000 film and TV writers were ready to strike starting at midnight, but they managed to reach an agreement over pensions and health plans and how much writers get paid.

This was critical for those of us glorying in what's getting called "peak TV." In movies, it's the director whose vision is executed, who controls the tone and pace. But in television, plots, characters, themes, even the vibe, all get established in the writers room. Back in 2015, Shonda Rhimes, arguably the most powerful woman in television, described herself as first a writer in an interview on WHYY's Fresh Air.

Rhimes replied that her executive producer tasks on How To Get Away With Murder involved far less creative control.

"It's more like being the grandmother," she said. "You hold the baby but then you get to give the baby back. With the other shows, I'm responsible for everything."

"Writers literally run TV shows," agrees James Poniewozik, chief TV critic for The New York Times. He says "peak TV" — an era where more than 450 scripted series were produced this season alone — would be impossible without hundreds of writers rooms filled with people bouncing ideas off each other, polishing each others' work — and serving the creator's singular voice.

"Mad Men was a particular example of that," he says. "It was a show really that was TV, but it was very literary. It sort of modeled itself on the kind of voice that you would have in short fiction."

Costs High for All Sides in Hollywood Writers Strike Nov. 5, 2007

The collective voice of the writers room is especially crucial with a network comedy like ABC's Black-ish that might produce as many as 25 episodes a season. But shorter series are increasingly common on streaming, cable and even network shows. Stranger Things, on Netflix, had only eight episodes. That translates to less money for writers, who are paid per episode. According to the Writers Guild of America, writers' median salaries have actually dropped over the past two years.

Poniewozik was hopeful this strike would be averted. As happy as he is that the writers and studios have found common ground, he could not help but think about a strike's potential personal upside.

"I might at least get caught up on a lot of my backlog," he said wryly.

While Los Angeles is breathing a sigh of relief — the city lost more than a billion dollars during the last writer's strike in 2007 — viewers like Poniewozik will have to figure out how stay on top of all the TV shows its writers dream up for us.