Accessibility links
'The Evangelicals': Frances FitzGerald On The Group's Rise As A Political Force A new book traces the history of white evangelicals in the U.S., from the group's rebellious 19th century roots to its role as political force. We asked the author about where the movement is headed. 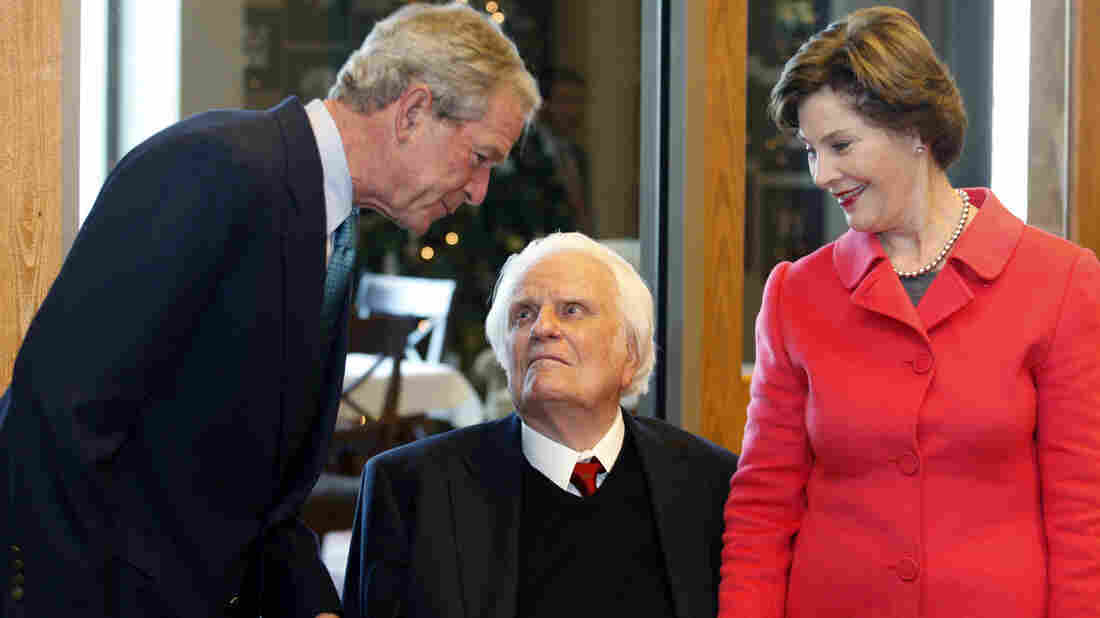 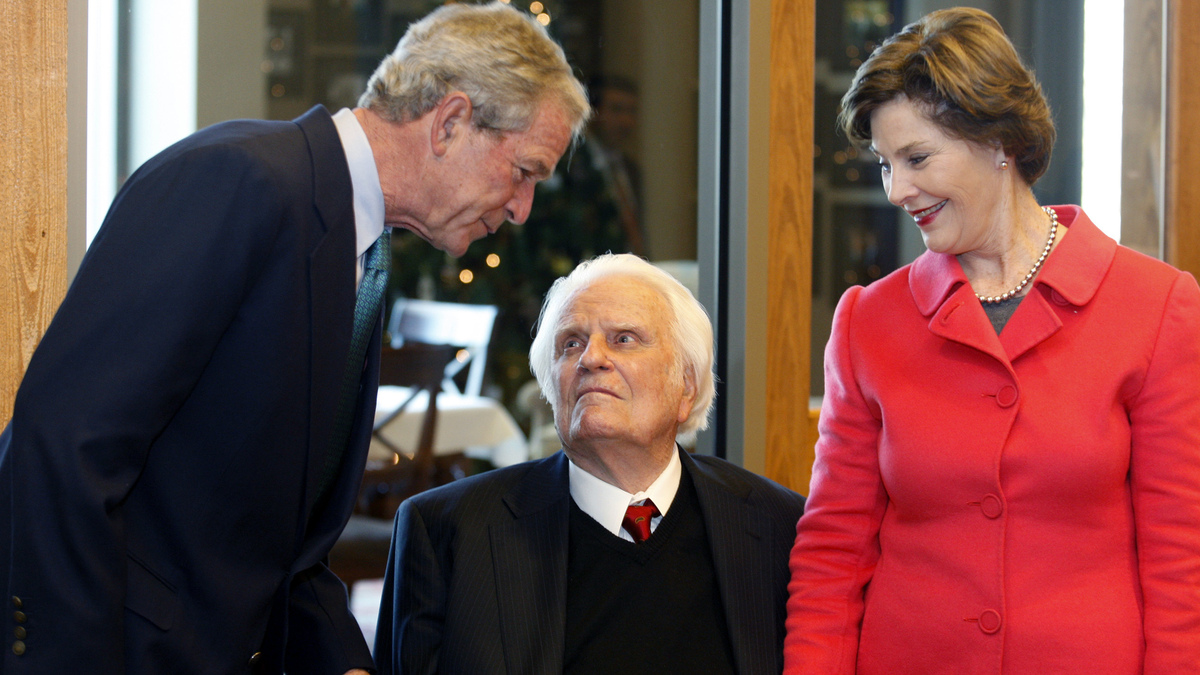 White evangelicals are a formidable force in American politics. Republican candidates hustle for their votes. White evangelical leaders have befriended presidents of both parties. The group even gets its own separate question in presidential exit polls.

In The Evangelicals: The Struggle to Shape America, journalist Frances FitzGerald writes about the group's journey to that powerful place. NPR interviewed her about how white evangelicals became that political force, as well as what is happening to that power in an increasingly secular nation. The interview has been edited for length and clarity. 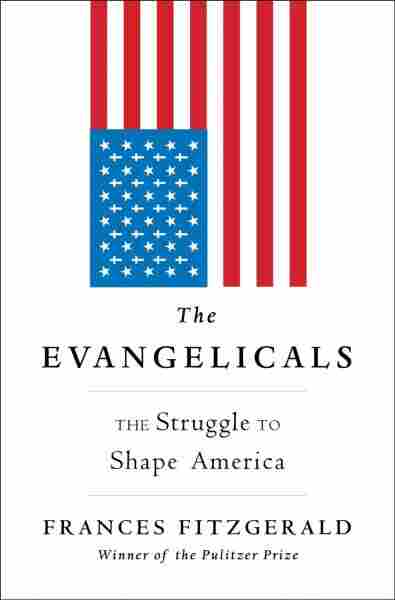 The Struggle to Shape America

Why did you decide to detail the history of white evangelicals in America?

I started writing about white evangelicals in 1980, when I happened to run into [Jerry] Falwell's church in Lynchburg, Va. So I did a long piece for the New Yorker then. And I've been writing about evangelicals off and on, mostly off, since then.

But more recently, during the Bush administration, [when it] came to power in Washington, I eventually realized that it was impossible to convey to my non-evangelical readers what [white evangelicals] were like and why certain kinds of things that would seem unreal to us, like the various apocalyptic scenarios, continue. They seemed much more reasonable in the 19th century, which is where they started, at a time when everybody in the United States was very religious.

And that religion was really the medium through which people expressed their revolutionary ideals, their objections to various parts of the government. And most of the cultural aspects of the 19th century were filtered through religion. So that's why I felt I had to write the whole history.

Today, white evangelicals are a big part of our political coverage, for example of presidential elections. How did evangelicalism get so tied into politics?

I think it always was, really.

Why Religion Is More Durable Than Commonly Thought In Modern Society

If you go back to Dwight Moody, the great 19th century revivalist, he was called upon to preach by a lot of captains of industry who wanted their workers to look like the Protestant laborers that they knew, who were thrifty, industrious, and so forth. So with Moody, there was absolutely no sympathy for the poor. He was really helping the rich in this case, or certainly the people running the industries.

That's only one example. The evangelicals split on geographic lines during the Civil War — that was politics also. The Northerners were abolitionists, by and large, and the Southerners were resisting them. But they were speaking more in religious language. The defense of slavery, for example, went straight to the Bible. And similarly, the authority for abolitionism was the Bible.

Today in this pluralistic society, I think evangelicals feel that they have to communicate with non-evangelicals and with secular people, and so they speak in more secular language when they do that.

So there are left-leaning Christians who use the Bible to justify their particular beliefs. Why is white evangelicalism, then, so heavily considered right-wing?

It is that conservatism in religion goes along with conservatism in the economic sphere as well, and in the social sphere. It doesn't always, but for the most part, for the Christian right, it certainly does. And they look back to an America that was totally Protestant and in the South totally evangelical.

In order to get there, you really have to do without the new technologies and new social mores and so forth. I mean, the '60s particularly riled them up, because of the vast social changes that were going on in the rest of the United States, including the civil rights movement.

Populism was often seen and described in religious terms, because that's the way that people thought about things, you know. And it's sort of less so today. I mean, look at the Tea Party revolt [that began in 2009]. They speak in more or less secular terms, although a lot of evangelicals have joined in their movement. And you'll hear echoes of it if you go to Tea Party meetings. I mean, God has not disappeared from the rhetoric.

And you talk in the book about a big part of evangelicalism being an individual, personal relationship to God. Conservatism also often stresses individual rights and individual responsibility. Is that a connection between the two?

Absolutely true, yes. And again it goes back to this split between the fundamentalists and the modernists [that took place in the early 20th century]. Fundamentalists said, essentially, you can't improve the society — what you can do is convert people one by one, and that will improve the society — whereas the modernists, which are now the mainline denominations, believed in social justice and in the regulation of institutions, economic institutions and governmental institutions, as well as the conversion of individuals.

Evangelicalism has clearly changed over the years, and it's still a broad term. What ties all these people we lump together as "white evangelicals" together? Are there common threads that have extended that whole time?

At that time ... not everybody accepted that term, but conservative protestants were divided into many different denominations. They didn't necessarily see eye to eye, but with the nationalization of just about everything, politics and culture and so forth, they began to accept that overall name.

And people find it in a way quite difficult to say what an evangelical is, exactly. But I accept ... the definition, which is a religious one, of people who have a high view of the Bible and who believe in being born again in Christ and in spreading the good news to others.

In the 2016 election, you had Russell Moore [president of the Ethics & Religious Liberty Commission of the Southern Baptist Convention] and other white evangelical leaders saying, "I can't really vote for Trump." It looks like there was a split between the leadership and some people who consider themselves evangelicals. How did that happen?

I think this has been happening for a while. It's been happening because of the loss of control by the Christian right, which happened in George W. Bush's second term, really, because everything went so badly then.

There is now a progressive party within evangelicalism that is, was, and still remains anti-abortion and so forth but is also socially justice-minded in a way, going back to those in the 19th century. So there's been a kind of splintering of what used to seem like an evangelical whole.

I'm not sure it ever was [a whole], but certainly the splintering is going on today because of a generational change, as well as ethnic change — when more Latinos joined evangelical churches.

And in a way, that's really what Russell Moore was keen on, first of all, before Trump came along. He was calling for religious reconciliation with African-Americans — and even more than the Southern Baptist Convention had achieved.

And so he feels that white evangelicals are, in effect, sort of dying out because at this moment, they, like the liberal protestants before them, are having fewer children because the more middle-class people are, the fewer children they have. And that hit the mainline churches first, but it is now starting to hit the evangelical churches. So he feels that they can't survive without Latinos and other immigrants.

But I mean, that was not the only reason for his dislike of Trump. He did so on personal grounds — you know, [the idea that] you can't elect someone who has had three wives, and et cetera.

But character and religious character, I think you could argue, has not been as important as the kind of stances that Republican candidates have taken on issues important to the Christian right, if not all evangelicals.

One expert on religion and politics recently told me that he likewise sees this splintering happening among evangelicals. How profound of a split do you see this as?

That's often true. But the fact is that very few people bother about evangelicals as a whole except at election time to see how they're going to vote. So I would be for — I mean, after all, they're a fifth of the entire population, so I think a little more coverage of the subtleties and nuances of the differences between evangelicals would help.

Read an excerpt of The Evangelicals