Accessibility links
Review: 'Fen,' By Daisy Johnson Daisy Johnson's story collection is set in the marshlands of eastern England — now mostly, catastrophically drained. It's beautifully creepy, hard to explain but easy to read over and over again. 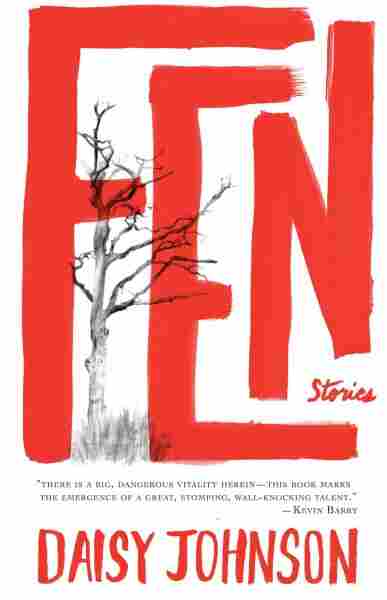 "The land was drained." That's the first sentence in Daisy Johnson's haunting short story collection, Fen, and she wastes no time in establishing a setting. The Fens of eastern England are marshlands — or they were, until the 17th century when Parliament ordered them drained and converted into farmlands. One environmental expert has called the draining of the Fens "England's greatest ecological disaster."

In Johnson's stories, the Fens are haunted, or something like it, and it's easy to imagine the creepy events that take place there as nature trying to reclaim itself while at the same time exacting revenge on humankind. The tales are populated by albatrosses, foxes and cats who seem to know more than they ought to, and the result is a creepy but beautiful debut book from an exceptionally talented young English author.

The book's first story, "Starver," opens with the mass slaughter of eels in the marshlands by workers who intended to use them for food. But the plan backfires: the eels refused to eat before they were killed, leaving the workers with fish with no meat on their bones.It then segues to the modern day, when a girl named Katy announces to her sister that she plans to stop eating. For a while, she manages to survive: "I wondered what she was running on, air or determination or anger or something or nothing or someone," her sister thinks. But it ends the way it has to, with Katy starving herself into the form of one of the doomed eels.

The story is emblematic of Johnson's greatest strengths: her wild imagination and ability to create a mood of uneasiness. She brings those attributes to "Blood Rites," a story about a group of young women who lure men to their house to eat them. "When we were younger we learnt men the way other people learnt languages or the violin," it begins. "We cared only for what they wanted so much it ruined them. Men could pretend they were otherwise, could enact the illusion of self-control, but we knew the running stress of their minds."

The tales are populated by albatrosses, foxes and cats who seem to know more than they ought to, and the result is a creepy but beautiful debut book from an exceptionally talented young English author.

It's a deeply disturbing story, and Johnson manages to create tension and suspense even after the women's unusual dietary practices are revealed. It's not a horror story that depends on a twist ending; Johnson prefers to lead with the ominous and make it even darker. Not many writers can pull that off. She can.

In some ways, Fen reads like a pastoral answer to the fiction of Angela Carter That's not to say it's derivative; it's not at all. But Johnson shares Carter's affinity for twisted stories that examine sexuality from the viewpoint of female desire, dispensing with the idea that the male gaze is the last word on anything sexual.

That's the case with "How to Lose It," which focuses on a fumbling first sexual encounter. "Virginity was a half-starved dog you were looking after, wanted to give away as quickly as possible so you could forget it ever existed," Johnson writes. "It was the lingo of sales and stocks; what was the best deal, when was the right time to sell it all." It's a starkly unsentimental story, with Johnson refusing to allow the reader to look away from the awkwardness.

The book's finest story is "The Scattering," told in three parts. It follows Matilda, a teenage girl, and her older twin brothers, Arch and Marco. Matilda is "threaded through with cynicism, taut with anti-belief," and doesn't know quite what to make of her pugnacious siblings, always at each other's throats. One of Matilda's brothers finds a partner and has a child; the other dies in the woods while pursuing a fox, and comes back in another form. It's a troubling story with themes of violence and incest, but it's beautiful, and in a way it's a key to the whole book — the reader learns that the stories are connected, and then it's hard to resist the urge to read them all again.

It's difficult to explain Fen; it reads like a book that doesn't want to be explained, only experienced. And thanks to Johnson's accomplished writing, dazzling imagination and unique point of view, it's one hell of an experience. Fen is a haunting book about a haunted place, and it's more than worth it to take the trip.