Accessibility links
Interview: Scott Westerfeld, Author Of 'Spill Zone' Scott Westerfeld's new graphic novel was inspired by photos of Chernobyl; it's the story of two sisters living on the outskirts of Poughkeepsie, N.Y. after a mysterious incident destroys the city.

A Dangerous Trip Into The 'Spill Zone:' Questions For Scott Westerfeld

A Dangerous Trip Into The 'Spill Zone:' Questions For Scott Westerfeld 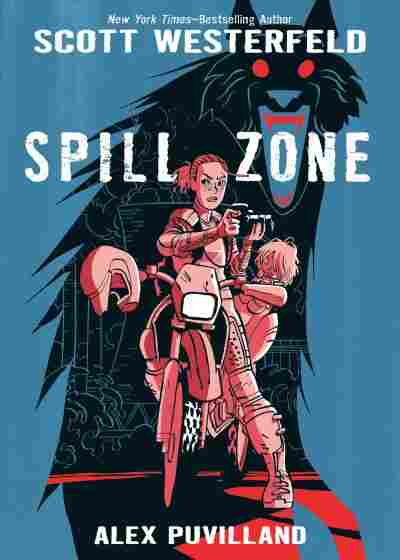 In the dark forests outside Poughkeepsie, N.Y., two sisters live alone. Lexa, mute, communicates only with her unnerving rag doll. Addison, the elder, gets on her motorbike after dark and ventures into the city, now deserted and terribly transformed after a mysterious incident called the Spill — which claimed both their parents.

Scott Westerfeld says the inspiration for his new graphic novel Spill Zone came partly from a photograph taken in Pripyat, the city just outside the Chernobyl nuclear complex. It showed a classroom full of desks, "each with a textbook on it, all turned to the same page. It was taken 20 years after the Chernobyl accident, but still told the story of those kids all jumping up at once to flee the nuclear cloud, a slice of life frozen in disaster," he tells me in an email conversation.

"Around the same time as Chernobyl," he adds, "a horrible incident occurred in a small city in northern Brazil, called Goiania. Some scrap thieves broke into a closed-up hospital to steal a radiotherapy unit (for zapping tumors). They sold it to a scrapyard, and the family of the scrap dealer discovered a strange glowing substance inside — cesium 137. The family played with it, showed it off to neighbors, even ingested some. In the end, over a hundred thousand people had to be tested, dozens of houses were torn down, and even a wing of the hospital where victims had sought treatment was contaminated.

Spill Zone's Po'town has been similarly destroyed by a weird technology that it couldn't have fully understood. The town is also frozen in that one awful night, just as Addison is arrested by her own loss."

What made you decide to try the graphic novel format?

Spill Zone is about an artist working through a loss, a photographer who creates images to try to comprehend the destruction of her family and her hometown. It's about making art by witnessing, going into a place and recording what's happening there. So I didn't want to be precious about it — I wanted some of that art on the page. A graphic novel gives the reader direct access to those images, and a look through Addison's camera at the weird manifestations that have taken over her childhood home.

I also wanted readers to have access to the psychic conversations between Addison's little sister, Lexa, and her creepy doll, Vespertine. The doll, salvaged from the Zone, is the last scrap of Lexa's childhood. But it also seems to have its own acerbic personality, like it's more than just an imaginary friend. In a prose novel from Addison's point of view, those silent conversations would have been invisible, or relayed indirectly. But in comics, thoughts can be rendered right on the page.

So I guess what I wanted was lots of channels of information for the reader to sort through, like looking at X-ray film to find the truth, rather than a text.

What's Addison's attraction to the Zone, other than that she's making a living by selling her photos? Why can't we stay away from places like that?

The Victorians used to build fake Grecian ruins in their gardens, so they could ruminate on the impermanence of things while pruning the hedges. And when I first moved to NYC, there was a dive bar called Downtown Beirut that was in a barely standing tenement building. People love ruined places, I guess, with all their melancholy and Ozymandian glory. But Addison also has the excuse that she's trying to find out answers, or at least she's serving as a witness to disaster.

The colors in this book are so striking — the way the Zone is rendered in cheerful, glowing pastels, in contrast to the darkness of the world outside. How did you decide what it would look like?

My original plan was for the real world to be in black and white, and the Zone in vivid color, like in the Wizard of Oz. But then most of the book wound up taking place in the real world, because I was more interested in the effects of the Spill on society around it. So rather than have a mostly black and white graphic novel, we decided to render the real world in "normal" colors, a bit restrained maybe, and to turn the Zone up to eleven. Hilary Sycamore has done a marvelous job on that, with each neighborhood of the Zone having its own weird palette, some cheerful and pastel, some Peter-Max-ish trippy, and some deliberately violent to the eye. Being there often feels like living under an alien sun, a place for which your eyeballs haven't evolved.

I get the feeling the Zone is a character in its own right ... am I on to something?

We are constantly victims of a capricious world that we can never grasp all the moving parts of. There is no safety in home, or family, or even in the smiling faces of the dolls we grew up with.

And to really be a character, a setting has to have motivations. In my Uglies series, the whole conflict is that the city's motivations are at odds with those of the protagonists. With Spill Zone I wanted to push that further, in that Zone has it's own personality, agenda, desires, and even a voice in Lexa's creepy talking doll, Vespertine. (About which you'll find out more in book two.)

Why Poughkeepsie, of all places?

I went to college in Poughkeepsie, and the city has its own curious little disaster narrative. Po'town's first industry was as an ice town. Icebergs were floated down the Hudson from Canada and stored there in icehouses, to be sold off to New York City during the summer. But then a strange technology, refrigeration, appeared to pull the rug out from under the town. It hasn't quite ever recovered.

That's the meta-theme of Spill Zone, I guess. We are constantly victims of a capricious world that we can never grasp all the moving parts of. There is no safety in home, or family, or even in the smiling faces of the dolls we grew up with.