Accessibility links
At 'The Dinner Party,' Stories That Walk The Line Between Tragedy And Comedy The 11 stories in Joshua Ferris' new collection have all been published before, but they provide a fine showcase for his sly wit, proceeding from the ordinary to the uncomfortable and even bizarre.

At 'The Dinner Party,' Stories That Walk The Line Between Tragedy And Comedy

At 'The Dinner Party,' Stories That Walk The Line Between Tragedy And Comedy 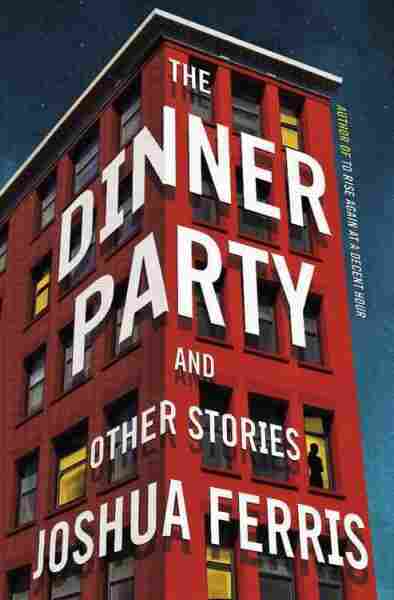 Joshua Ferris has a bead on the insecurities that run beneath our quotidian exchanges, a shadowy subtext always threatening to spill into the open, like a sewage system overflowing with storm runoff. His typical protagonist is a man in his 30s who goes off the deep end in a darkly humorous way when his anxieties — usually about his wife or work — overwhelm him.

The Dinner Party, Ferris' first collection of short stories, is filled with men who become so unhinged you're tempted to call a carpenter. All 11 of these stories have been published before, more than half of them in The New Yorker. Many echo aspects of his novels — including the increasingly absurd veneer of normality that drives his sendup of office culture in Then We Came to the End, the unnamed malaise that permeates The Unnamed and the unsettling invasion of privacy and identity that infuses To Rise Again at a Decent Hour.

The excellent title story is about an old friendship colliding with a marriage to inflict maximum hurt. It opens as an unhappily childless couple prepare to host another couple for dinner. The husband isn't thrilled at the prospect: "Even their goddam surprises are predictable," he complains, anticipating that their guests will flaunt the news of their pregnancy. But when their friends fail to show up, the disgruntled husband discovers that they are less predictable than he thought — and Ferris' most Cheeveresque story morphs into something quite sad and dark.

Ferris' narratives usually proceed from the ordinary to an uncomfortable and sometimes bizarre escalation of strangeness or disaster. The overarching message is that stability is elusive and certainly not a given — in work, at home and, presumably, in the world (though Ferris doesn't go global).

In "A Night Out," Tom and Sophie set off by steamy subway from their home in Brooklyn to dinner with her parents on Manhattan's Upper West Side. Their evening derails when Sophie imagines that the blond woman they run into — Tom's former colleague — is the lover he has recently come clean about. Normally dependable, Sophie vanishes, determined to follow the woman. Tom is left high and dry — in increasingly miserable circumstances. An alternate title for this nightmare scenario could be "Things Fall Apart."

Not all the stories hit home. "The Breeze" is a desultory tale that pits a wife's restlessness against her husband's complacency as they dither and bicker over their evening plans — "over nothing, the all-consuming nothing of what to do." "More Abandon," an outtake from Ferris' first novel, presents a bleakly absurdist scenario of a dependable middle manager who wreaks havoc on his empty office one night after everyone else has left. Though, unable to completely shake his sense of responsibility, he fesses up the next morning, when "the hallways are starting to crackle with the day's coping banter." That "coping banter" is classic Ferris.

Ferris stretches for greater range in several stories, including "A Fair Price," a sinister tale with a menacing, Harold Pinter vibe about a man about to get married who is still smarting from the abuse he suffered at the hands of his stepfather. Fueled in part by his fiancée's insistence that he invite this brutal man to their wedding so the bride's and groom's sides of the aisle will be more balanced, he shockingly takes out his rage on an older man he hires to help him empty a storage unit. It becomes grimly clear to the reader that it's going to take a lot more than balanced aisles to set this marital ship on an even keel.

Ferris finesses the line between tragedy and comedy, and his sly wit often surfaces in sarcastic, offbeat ways. "Sure," says the wife frantically calling local hospitals in search of her missing dinner guests. "I love to hold." In "The Valetudinarian," a retired widower asks the Russian hooker sent by a friend on his 66th birthday: "How did you know what to say to get me to take that pill?" — referring to the Viagra contraindicated by his heart condition. "Are you so stupid?" she says. "I am prostitute!" Ferris continues, "He had been living as a dead man for years, and without her sudden presence in his suffocating cloister, coaxing and tempting him, he would certainly have died a dead man."

As e.e. cummings so succinctly put it, "Unbeing dead isn't being alive." Ferris' unmoored souls struggle with living death — along with pathological insecurity and fear of abandonment. While the stories in this book don't particularly advance this talented writer's career, The Dinner Party provides a fine showcase for his work.