Accessibility links
A 'Forgotten History' Of How The U.S. Government Segregated America Author Richard Rothstein says the housing programs begun under the New Deal were tantamount to a "state-sponsored system of segregation," in which people of color were purposely excluded from suburbs. 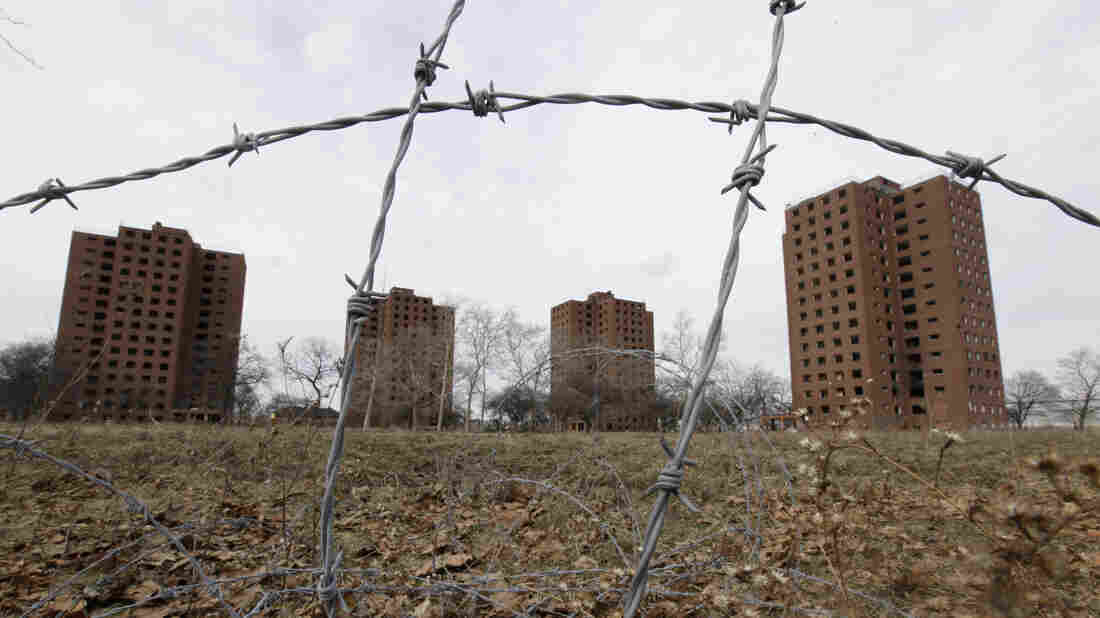 Federal housing policies created after the Depression ensured that African-Americans and other people of color were left out of the new suburban communities — and pushed instead into urban housing projects, such as Detroit's Brewster-Douglass towers. Paul Sancya/AP hide caption 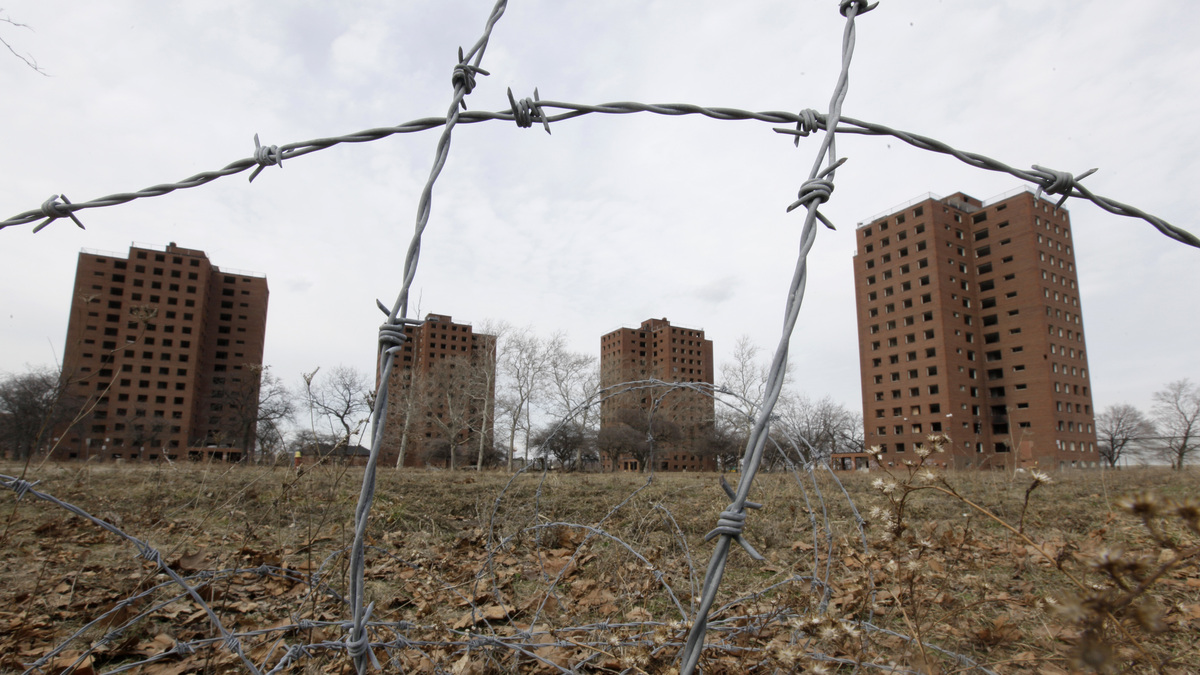 Federal housing policies created after the Depression ensured that African-Americans and other people of color were left out of the new suburban communities — and pushed instead into urban housing projects, such as Detroit's Brewster-Douglass towers.

In 1933, faced with a housing shortage, the federal government began a program explicitly designed to increase — and segregate — America's housing stock. Author Richard Rothstein says the housing programs begun under the New Deal were tantamount to a "state-sponsored system of segregation."

The government's efforts were "primarily designed to provide housing to white, middle-class, lower-middle-class families," he says. African-Americans and other people of color were left out of the new suburban communities — and pushed instead into urban housing projects.

Rothstein's new book, The Color of Law, examines the local, state and federal housing policies that mandated segregation. He notes that the Federal Housing Administration, which was established in 1934, furthered the segregation efforts by refusing to insure mortgages in and near African-American neighborhoods — a policy known as "redlining." At the same time, the FHA was subsidizing builders who were mass-producing entire subdivisions for whites — with the requirement that none of the homes be sold to African-Americans.

Everyone Pays A Hefty Price For Segregation, Study Says

Rothstein says these decades-old housing policies have had a lasting effect on American society. "The segregation of our metropolitan areas today leads ... to stagnant inequality, because families are much less able to be upwardly mobile when they're living in segregated neighborhoods where opportunity is absent," he says. "If we want greater equality in this society, if we want a lowering of the hostility between police and young African-American men, we need to take steps to desegregate."

On how the Federal Housing Administration justified discrimination 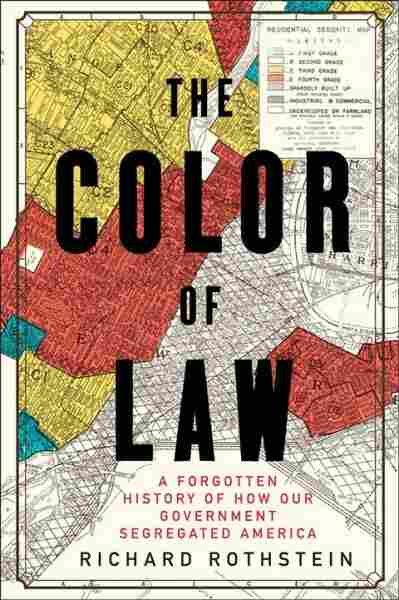 The Color of Law

A Forgotten History of How Our Government Segregated America

There was no basis for this claim on the part of the Federal Housing Administration. In fact, when African-Americans tried to buy homes in all-white neighborhoods or in mostly white neighborhoods, property values rose because African-Americans were more willing to pay more for properties than whites were, simply because their housing supply was so restricted and they had so many fewer choices. So the rationale that the Federal Housing Administration used was never based on any kind of study. It was never based on any reality.

On how federal agencies used redlining to segregate African-Americans

The term "redlining" ... comes from the development by the New Deal, by the federal government of maps of every metropolitan area in the country. And those maps were color-coded by first the Home Owners Loan Corp. and then the Federal Housing Administration and then adopted by the Veterans Administration, and these color codes were designed to indicate where it was safe to insure mortgages. And anywhere where African-Americans lived, anywhere where African-Americans lived nearby were colored red to indicate to appraisers that these neighborhoods were too risky to insure mortgages.

On the FHA manual that explicitly laid out segregationist policies

Interactive Redlining Map Zooms In On America's History Of Discrimination

It was in something called the Underwriting Manual of the Federal Housing Administration, which said that "incompatible racial groups should not be permitted to live in the same communities." Meaning that loans to African-Americans could not be insured.

The Underwriting Manual of the Federal Housing Administration recommended that highways be a good way to separate African-American from white neighborhoods. So this was not a matter of law, it was a matter of government regulation, but it also wasn't hidden, so it can't be claimed that this was some kind of "de facto" situation. Regulations that are written in law and published ... in the Underwriting Manual are as much a de jure unconstitutional expression of government policy as something written in law.

Today African-American incomes on average are about 60 percent of average white incomes. But African-American wealth is about 5 percent of white wealth. Most middle-class families in this country gain their wealth from the equity they have in their homes. So this enormous difference between a 60 percent income ratio and a 5 percent wealth ratio is almost entirely attributable to federal housing policy implemented through the 20th century.

African-American families that were prohibited from buying homes in the suburbs in the 1940s and '50s and even into the '60s, by the Federal Housing Administration, gained none of the equity appreciation that whites gained. So ... the Daly City development south of San Francisco or Levittown or any of the others in between across the country, those homes in the late 1940s and 1950s sold for about twice national median income. They were affordable to working-class families with an FHA or VA mortgage. African-Americans were equally able to afford those homes as whites but were prohibited from buying them. Today those homes sell for $300,000 [or] $400,000 at the minimum, six, eight times national median income. ...

So in 1968 we passed the Fair Housing Act that said, in effect, "OK, African-Americans, you're now free to buy homes in Daly City or Levittown" ... but it's an empty promise because those homes are no longer affordable to the families that could've afforded them when whites were buying into those suburbs and gaining the equity and the wealth that followed from that.

The white families sent their children to college with their home equities; they were able to take care of their parents in old age and not depend on their children. They're able to bequeath wealth to their children. None of those advantages accrued to African-Americans, who for the most part were prohibited from buying homes in those suburbs.

Public housing began in this country for civilians during the New Deal and it was an attempt to address a housing shortage; it wasn't a welfare program for poor people. During the Depression, no housing construction was going on. Middle-class families, working-class families were losing their homes during the Depression when they became unemployed and so there were many unemployed middle-class, working-class white families and this was the constituency that the federal government was most interested in. And so the federal government began a program of building public housing for whites only in cities across the country. The liberal instinct of some Roosevelt administration officials led them to build some projects for African-Americans as well, but they were always separate projects; they were not integrated. ...

The white projects had large numbers of vacancies; black projects had long waiting lists. Eventually it became so conspicuous that the public housing authorities in the federal government opened up the white-designated projects to African-Americans, and they filled with African-Americans. At the same time, industry was leaving the cities, African-Americans were becoming poorer in those areas, the projects became projects for poor people, not for working-class people. They became subsidized, they hadn't been subsidized before. ... And so they became vertical slums that we came to associate with public housing. ...

A previous version of this story incorrectly spelled Daly City as Daley.