Accessibility links
Trump Set To Relax Rules On Political Activity By Religious Groups The move on the National Day of Prayer is among the promises Trump made on the campaign trail that would blur government lines that divide church and state. 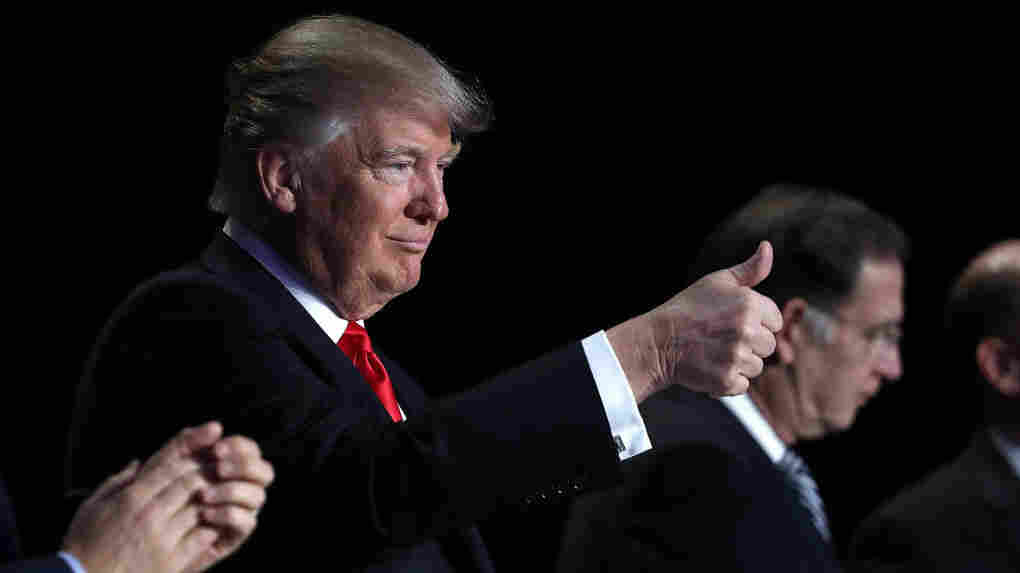 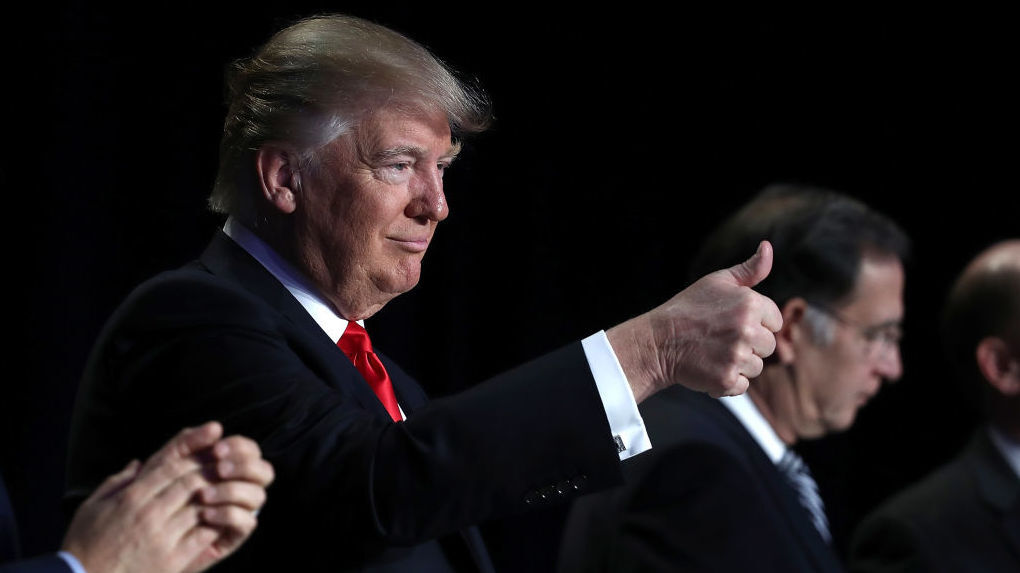 President Trump flashes a thumbs up at the National Prayer Breakfast in February.

President Trump is set to sign an executive order on Thursday that aims to relax restrictions on political activity by religious groups without threatening their tax-exempt status.

According to a senior White House official, the order will reiterate the White House's commitment to religious liberty; will direct the IRS to use "maximum enforcement discretion" to ease the burdens of the Johnson Amendment, which regulates political activity of non-profits such as churches; and will call for "regulatory relief" from the Affordable Care Act mandate that employer-provided health care plans provide free birth control and other reproductive health services.

The Johnson Amendment In 5 Questions And Answers

Inside Trump's Closed-Door Meeting, Held To Reassure 'The Evangelicals'

The directives are among the promises Trump made on the campaign trail that would blur government lines dividing church and state. In meetings with religious leaders last year, Trump pledged to "get rid" of IRS rules that prohibited tax-exempt groups like churches from engaging in political advocacy, NPR's Sarah McCammon reported. However, such rules, established by the 1954 Johnson Amendment, are rarely enforced.

Trump repeated the pledge as president at the National Prayer Breakfast in February, saying that he "will get rid of and totally destroy" the restrictions in order to "allow our representatives of faith to speak freely and without fear of retribution."

However, there are limits to what this executive order can do, and Trump himself is not able to repeal the Johnson Amendment, which would take an act of Congress.

While some evangelical voters — who comprised a significant portion of Trump's base during the election — are sure to champion the new rules on political advocacy, it is not clear whether the religious liberty language will satisfy social conservatives. The language does not appear to go as far as one reported draft that leaked in February, just after Trump spoke at the National Prayer Breakfast. Such an order would radically redefine what constitutes a religious organization, and reports of its consideration raised widespread backlash and predictions that the rules would not hold up in court. That initial order never materialized.

The new executive order does give some religious groups, such as the Little Sisters of the Poor, one of the things they had hoped for from Trump — allowing religious entities to stop providing contraception in their employee health care plans if they have religious objections. In 2014, the Supreme Court ruled that closely-held private corporations such as Hobby Lobby, which brought the challenge, did not have to comply with the contraception mandate if it violated their religious beliefs.

The order also comes after the White House and Republicans made concessions, such as continuing to fund Planned Parenthood, in the latest spending bill, that many religious conservatives wanted undone.

Even what the order does call for will not be met with universal acclaim by evangelical groups. The National Association of Evangelicals, or NAE, released a survey in March that showed that pastors overwhelmingly opposed endorsing candidates from the pulpit. The directives from the White House could give pastors the comfort to do that with the assurance that the IRS will not come after them and challenge their church's tax-exempt status.

"Evangelicals emphasize evangelism, and pastors often avoid controversies that might take priority over the gospel message," said NAE President Leith Anderson in a statement about the poll. "Most pastors I know don't want to endorse politicians. They want to focus on teaching the Bible."

But other fervent Trump backers, such as Liberty University president Jerry Falwell, Jr., have championed Trump's push to do away with the political restrictions.

"It's used as a club, by the [Internal Revenue Service] and the left, to silence conservatives," Falwell told the Lynchburg, Va., News & Advance in February.