Accessibility links
Book Review: The Pearl Thief,' By Elizabeth Wein In this prequel to Code Name Verity, Elizabeth Wein creates a charming, compelling heroine who, along with a diverse supporting cast, must solve the mystery of a disappearance on her parents' estate. 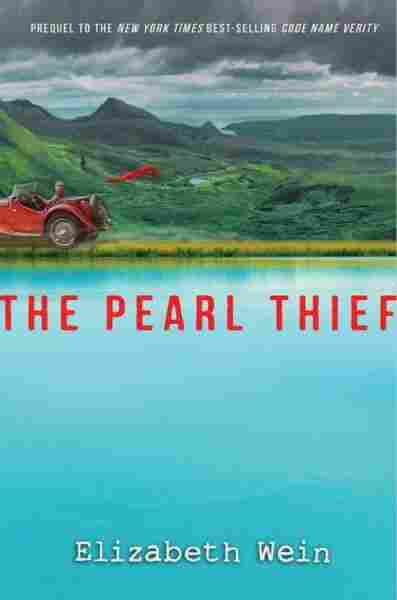 Here are some things you should know about The Pearl Thief if you haven't read Elizabeth Wein's earlier book Code Name Verity: it stands perfectly well on its own, and you don't need to know anything about Code Name Verity to enjoy and appreciate it.

Here are some things you should know about The Pearl Thief if you have read Code Name Verity: It in no way diminishes that book. If anything, it deepens it, while Code Name Verity casts long slim shadows over this prequel, dimming some moments' joy and fiercely sharpening others.

Here are some things you should know about me, in either case: Reading Code Name Verity in one sitting kept me up until 4:00 AM, at which point I had to slip out of bed and into another room in order to sob violently without waking my partner. Its effect hasn't left me — four years after reading it the words "stuck in the climb" and "Kiss me, Hardy!" still hook my heart into my throat. I love it more fiercely and protectively than any book I've read in recent memory. And I was very concerned about what a prequel would do to it.

The Pearl Thief is equal parts murder mystery and coming-of-age story. Julia Beaufort-Stuart is the granddaughter of the Earl of Strathfearn; his death has left the family estate in so much debt that it's being turned into a boys' school. Julia and her family are there for one last summer — during which she'll turn 16 — before bidding it goodbye.

But one day while Julia's dozing by the estate's pearl-laden river, she suffers a vicious blow to the back of her head. When she wakes up days later in the hospital, she has no memory of who attacked her, nor the moments immediately before and after the assault. Meanwhile, a professor who works for her family has gone missing and is presumed dead, local Travellers are suspected and persecuted, and slowly, painstakingly, with the help of friends and siblings, Julia begins tracing the tangle of what happened, unknotting the mystery one river pearl at a time.

It's an enormously different book from 'Code Name Verity' — but across time, space, and genres, they slip off their gloves and hold hands.

The Pearl Thief is very interested in different axes of privilege and persecution. The brilliant cast of characters includes debt-laden aristocrats, a young librarian with a disfiguring genetic disease, and a brother and sister from a Traveller family who trace their connections to the land at least as far back as Julia can. There are difficult, fraught conversations between people prejudiced against each other in various ways, related in Julia's charming, self-aware, and potentially unreliable narration. She herself doesn't come out of these conversations covered in glory — but though she begins by flinching away from describing moments of her own shameful thoughts and behaviors, she invariably rallies and delves into them with bracing honesty.

Julia's warm, wry, often self-deprecating voice is the novel's beating heart, and is nowhere so engrossing as when she's admiring other girls and women. The deep joy she feels in their company, no matter how different they are from each other and herself, is moving and wonderful, and a profound part of her character; her developing skills at mimicry, manipulation and problem-solving are rooted in her almost boundless capacity for empathy.

I also read The Pearl Thief in a sitting that took me long past my bedtime, and what my feelings on finishing it lacked in intensity they made up for in complexity. It wasn't the overwhelm of a spy thriller set during World War II, with its high stakes and deep losses — it was the bittersweet ache of recollecting the borders between childhood and adulthood, the people and places in which we take root and from which we uproot ourselves, the pure painful transience of summer. It's an enormously different book from Code Name Verity — but across time, space, and genres, they slip off their gloves and hold hands.