Accessibility links
Remastering The Mythos: Questions For Ruthanna Emrys When Ruthanna Emrys first read H.P. Lovecraft's classic tale "The Shadow Over Innsmouth," her sympathies were squarely with the monsters — and that sympathy was the seed of her new book, Winter Tide. 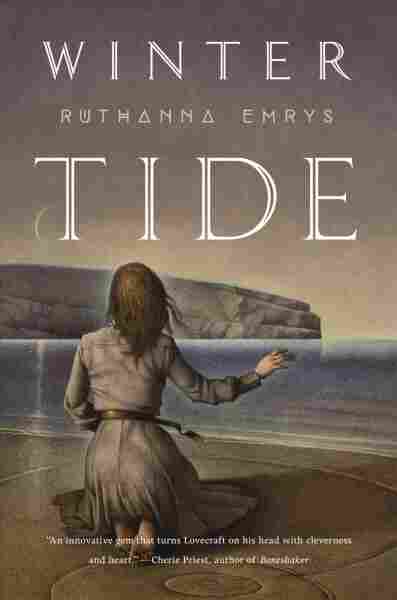 When Ruthanna Emrys first read H.P. Lovecraft's classic story "The Shadow Over Innsmouth," she already knew the basics: It's about a creepy New England harbor town populated by strange, froggy-looking people who turn out to be monstrous, sacrificing humans to their dark gods under the sea.

"But I was shocked when the story started with a government raid that sends the frog-monster people to concentration camps," Emrys tells me in an email conversation. "It wasn't that Lovecraft himself could write this as [much as] that for almost 80 years, people had read this story and sympathized with the protagonist who calls down that raid. My own sympathy was squarely with the interned frog-monsters," she adds.

That shock and sympathy formed the seed of a short story called "The Litany of Earth," featuring Aphra Marsh, an Innsmouth survivor, still recovering from her losses and making a life for herself in late-1940s San Francisco. In her new novel, Winter Tide, Emrys continues Aphra's story as she grapples with working for the same government that killed her family.

"All literature is in conversation, but playing in someone else's sandbox puts you in a much more intense conversation. There's a responsibility, both to speak meaningfully about things that people have been talking about for decades, and to speak beyond those things," Emrys says. "In Winter Tide, I wanted to talk about how we rebuild community after genocide, and how rebuilt community is always changed from what we had before. And I wanted to talk about all those readers over the years who didn't question the Deep One concentration camps.

The flip side of these darker inspirations is that Lovecraft's Mythos is a big sandbox, with stars for grains of sand. It's full of incomprehensibly strange life, and civilizations that rise and fall over aeons. I wanted to write someone who wasn't terrified of that strangeness, who found the vast existential gulfs between stars comforting"

How did you think about making your story accessible to non-Lovecraft readers?

I tried to treat the Mythos as I would a world of my own devising, and help readers pick things up from context. ... I always have at least one first reader who reads no Lovecraft at all, along with someone who hates his work, and someone who loves it and knows all the trivia.

I tried to treat the Mythos as I would a world of my own devising, and help readers pick things up from context. It's not fundamentally different from a wholly original world — or from historical fiction or any other genre where you start writing in a furnished room. It's not fundamentally easier either, and I went through a lot of iterations. I always have at least one first reader who reads no Lovecraft at all, along with someone who hates his work, and someone who loves it and knows all the trivia.

One advantage was that Lovecraft seems to trickle into the popular consciousness the same way that Star Trek or Pride and Prejudice do. People know the basics even if they'd never be caught dead reading/watching that thing. During the election a major paper had an editorial from the point of view of Cthulhu, expressing His opinion of the candidates, and I thought, well, I guess I'll be okay.

What do you say to people who don't want anything to do with the Mythos, because of Lovecraft's documented racism and sexism?

I think that's perfectly reasonable, honestly. Those prejudices are part of the Mythos's bones, and I would never argue with someone who found that too painful or unpleasant to be worth reading.

Everything Has Meaning In The Dream World Of 'Vellitt Boe'

That said, a lot of modern writers deal head-on with Lovecraft's bigotry. If you think you might enjoy things that would make [Lovecraft] spin in his grave, Victor LaValle's Ballad of Black Tom, Matt Ruff's Lovecraft Country, and Kij Johnson's Dream Quest of Vellitt Boe are highly enjoyable both as posthumous gyroscope production and as stories in their own rights.

Alternatively, if you want foundational mindbending horror but never want to think about Cthulhu, I can't do better than to recommend Robert Chambers's King in Yellow cycle. He basically invented the forbidden tome that messes with your mind and morality. He also appears to have had about the same politics as H.G. Wells, and his stories are full of razor-sharp social satire.

You've said the Yith are your favorite Lovecraft creations – why? Tell us a little about them and their role in this story.

The Yith are from Lovecraft's "The Shadow Out of Time." A professor wakes from a five-year fugue to discover that during those lost years, he suffered a drastic personality change and drove away his entire family. He starts to recover memories of living in a very alien body in the distant past, conversing with other "captive minds" and writing memoirs for his alien captors. The Yith forcibly exchange minds over vast spans of space and time, and through this means document every species that lives and thrives and goes extinct in the history of the solar system.

So they're basically cosmic librarians who will ruin your life — in exchange for preserving the intimate details of your existence for aeons to come. As far as deals with the devil go, that's pretty damn tempting!

For Lovecraft, I think the Yith embodied the vertigo of cultural relativism: Your species will be remembered after they're dust, but you have to admit that they'll eventually fall to dust — and that their accomplishments are trivial on a cosmic scale. For me, the core fascination is this paradoxical conflict of cultural respect and destruction. The Yith preserve the legacy of species that would otherwise be forgotten, culture and language and precious hidden truths. They're Humboldt's Parrot on a grand scale. But the cost is huge. Whole species never get to have histories, because when the Yith hit an extinction event, they pull a mass mental exchange, take over the bodies of the next species up that looks good, and send the displaced minds back to face extinction in their place.

Lovecraft tries frequently for ideas that are simultaneously attractive and repulsive. He frequently fails, because he was repulsed by so many things. But with the Yith, he nails it.

I loved the image of the Innsmouth matriarchs with their bowls of salt water, running the household and keeping everything ritually correct. How much of the worldbuilding is ol' H.P., and how much is you?

For Lovecraft, the Deep Ones stood for the scariness of interracial breeding, or of having mental illness run in your family, or of people who don't speak English, or all of the above. He didn't really bother to give them family traditions. So the cultural worldbuilding is all me.

All literature is in conversation, but playing in someone else's sandbox puts you in a much more intense conversation. There's a responsibility, both to speak meaningfully about things that people have been talking about for decades, and to speak beyond those things.

"Shadow Over Innsmouth" does contain a pitch-perfect (if not very self-conscious) depiction of blood libel. Suspicious outsiders declaim, with great confidence, about how the Innsmouth natives sacrifice children and have concourse with devilish monsters. Sound familiar? Partly through deconstructing backwards from these to-me-obvious lies, and partly just because of my own background, their culture ended up with similarities to Judaism. The home-based spiritual practice that compliments the temple-based one, that's very much a funhouse reflection of my own experience. Little everyday customs, like saving tears in a jar of salt water to bring back to the ocean, color how Aphra sees the world.

What do you want people to take away from your story?

I never know quite how to answer that question — whatever I want people to take away, I don't want them to go in thinking, oh, Ruthanna wants me to see X. My editor Carl Engle-Laird said, "Winter Tide provides me with both hope and grim determination to survive and prosper in the face of hatred." I could do worse than to want that for my readers.

You're currently running the Lovecraft Reread on Tor.com – can you recommend a good place to start for newbies?

From Lovecraft's own oeuvre, "Pickman's Model," gives a good feel for his strengths without falling too deeply into his failings. Jumping to the modern stuff, Elizabeth Bear's "Shoggoths in Bloom" and Sarah Monette's The Bone Key tell tight, psychologically intense stories that engage with issues Lovecraft shied away from.

I also asked my co-blogger Anne Pillsworth for recommendations. She writes in the small but delightful subgenre of Lovecraftian YA — I recommend her Redemption's Heir series if you like kids scrambling to control magic, deals with gods who are Dangerous to Know, and parents who aren't complete idiots. Anne says:

"Call of Cthulhu" could be good for people already conversant in science fiction and fantasy, since they're used to entering strange new worlds, and accept not understanding everything at once. For an easier gateway to the central canon, "The Dunwich Horror" has the semi-naive Armitage at its heart, plus that wonderful excerpt from the Necronomicon, which pretty much lays out the Mythosian credo of OTHERS WHO WANT TO COME BACK.

Since Anne thoughtfully considers which stories ease you into the pool, I'll close by heading for the deep end and recommend one of Lovecraft's collaborations with Hazel Heald. "Out of the Aeons" is a wild ride with lots of chewy cosmic ideas, secret pre-human history, extraterrestrial document forgery, a genuinely creepy central conceit, and internecine museum politics. It uses the word "cyclopean" eleven times. It's fun. It reminds me why I still read Lovecraft — even aside from his ability to irritate me, oyster-like, into producing stories of my own.