Accessibility links
Pop Hitmaker Cashmere Cat On 'Stumbling Upon Something New' The Norwegian producer has made beats for artists like Kanye West and Ariana Grande. For his debut album, 9, he says he wanted to recapture the feeling of discovering his own sound for the first time. 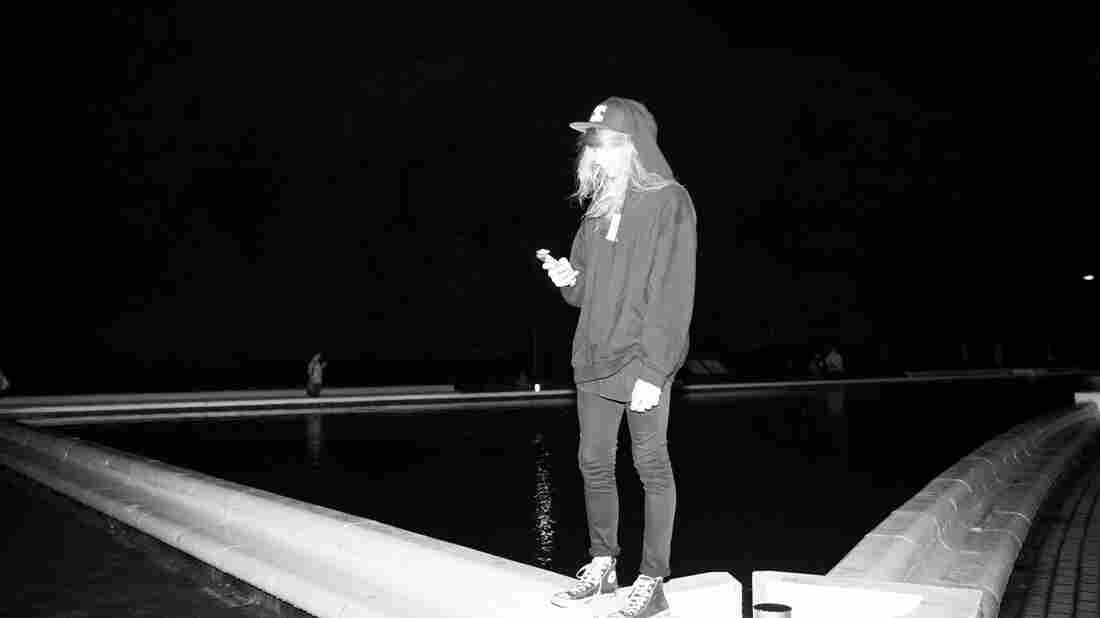 Magnus August Høiberg, better known as Cashmere Cat, is the producer behind hits like Kanye West's "Wolves." 9, out now, is his first solo album. Masahiro Shimazaki/Courtesy of the artist hide caption 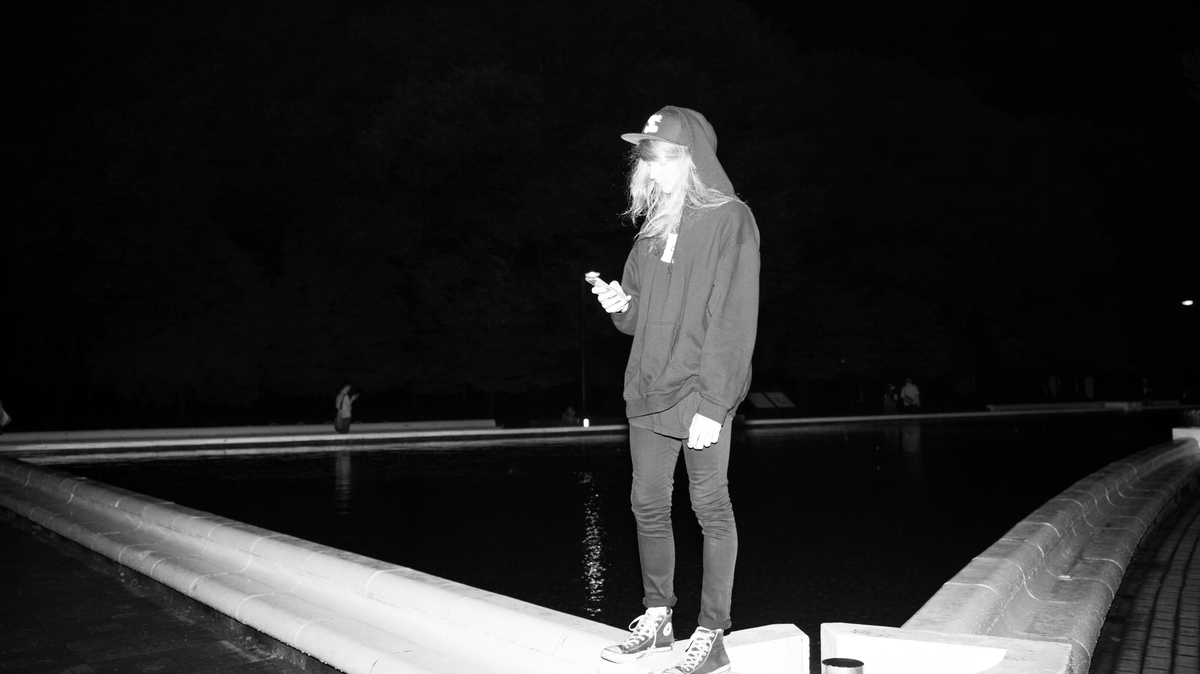 Magnus August Høiberg, better known as Cashmere Cat, is the producer behind hits like Kanye West's "Wolves." 9, out now, is his first solo album.

Masahiro Shimazaki/Courtesy of the artist

Cashmere Cat is one of the most sought-out pop producers in the world. His beats have made hit songs for artists like Kanye West, Ariana Grande, Selena Gomez and Charli XCX. His solo shows sell out. For the longest time, however, he did everything in his power to stay out of the spotlight.

So who is Cashmere Cat? His name is Magnus August Høiberg. Høiberg, 29, grew up in the city of Halden, Norway (population: around 30,000). When you watch him perform as Cashmere Cat, it is a spectacle. He does not speak during his shows, he wears oversized jumper jackets in bright colors and his long, blond hair covers his face. But in person, Høiberg is just the opposite: talkative, honest, friendly and even silly — singing, imitating sounds and cracking jokes.

Høiberg sat down with NPR to talk about his debut album, 9. Hear him discuss the album and his collaborations with West and The Weeknd at the audio link, and read on for longer excerpts of the conversation.

Monika Evstatieva: You are almost 30. What made you decide you were ready for your debut album now?

Cashmere Cat: I put out my first EP in 2012 and I stumbled upon a new sound, because for so long I [had] been trying to copy everyone. I was trying to be a fake Madlib or a fake J Dilla, and then I got really into Justice and I started trying to be fake Justice. And then I was a fake disco producer, like the Norwegian disco producer Lindstrøm.

Eventually I got so bored and I felt stupid and I called myself out a little bit for trying to imitate people so much, so I made this project that was called Katten, which in Norwegian means "the cat." The point of this was to make parody music. I would make a song that was a parody Swedish House Mafia song. It was just the most ridiculous thing you could ever think off — huge build-ups, a ridiculous big drop.

Just by doing that — and kind of letting go of any requirements of it being anything that would be taken seriously by anyone — I kind of stumbled upon something that really felt like my own. And I was just so excited by that, so the first two records I made were pretty much based around that sound.

When it came time to do my album, I really wanted to take some time and find that feeling again, where it feels like I'm stumbling upon something new. In this case it had a lot to do with me learning to work with artists — because up until this point it was pretty much me and my computer, and now it's more of the relationship between me and other people and that spectrum of infinite things to deal with, when it comes to other people's emotions and musical desires.

You've said that you feel like the music you did with Kanye West set the standard for what you want to do with your own music. Can you tell me a little bit about your collaboration on "Wolves"?

I'm pretty sure he's one of my favorite artists ever. He has been a hero of mine for so long, and then I was able to make this song with him. I kind of jokingly made this goal, when I set out to be Cashmere Cat, to produce a song for this guy called Jackie Chain — this rapper from Miami, Florida — and I wanted to do a song with Kanye West.

Those were the two goals, and then eventually just by me talking about it, it came around, and I did that song for Kanye. I don't know if this is because I produced it or because I really love it, but it's one of my favorite Kanye songs I've ever heard, and it just blew my mind that this song that I loved so much — I had a hand in it.

It really inspired my new work a lot and I understood that I can make something that's not necessarily for the club or for the radio or for anything in particular — [but it] can still be the most exciting, beautiful thing you've ever heard. I applied that feeling of being able to do those types of records on this new music.

How did you come up with the beat for "Wolves"?

Me and my friend Sinjin Hawke were working in London in this room that's maybe the size of a bathroom stall — two people can barely even stand up, like the smallest room ever. And we made this song and it's just the most simple thing ever — a distorted 808 and this weird crazy choir-synth half-sample thing that Sinjin Hawke has been pioneering for a while. And we just put it together and then we played this melody together and we made a beat that goes for a lot longer, goes for like four minutes, and has all these different parts. And then it ended up being the first 15 seconds of the song that turned into the main part of "Wolves."

The song changed multiple times, even after it was released — were you part of the changes?

I was not a part of making those changes at all, but I paid very close attention to when it happened. The way he changed his album after it came out ... it definitely messed with my head a little bit when it comes to finishing music. Because it is already stressful enough to commit to a song and release it and finish it, but now that he sort of started changing records after they are already released — just giving you in your mind that option — it's a really wild thing to do, and I have never seen an artist do something like this before.

Tell me about working on the song "Wild Love" with The Weeknd.

It's a song I did with The Weeknd and Francis and the Lights, and it came about in a really confusing way. I was working with Francis and he uses this plug-in instrument, a thing called a harmonizer. It's basically this thing you put audio into and it comes out as this weird chord — kind of synthy-sounding, but not really, still a sound. It's one of the most futuristic, confusing-sounding instruments I can possibly ever imagine.

Francis was using this instrument on his album, which I worked a lot on, and I was so fascinated by the sound. It kind of blew my mind — the different stuff you can do with it and also how fully unpredictable it was. It's a computer program, so it should technically be the same outcome every time, but it's completely different every time, even when you give it the same input. He just showed it to me how to use it and I was [like], "Oh, that's cool," and then I went to this other room and I bought the plug-in and started messing around with it, and the first thing I made was the demo for "Wild Love."

I made it in maybe three minutes, having absolutely no idea what I was doing. I had zero idea how to use the software. And I played it to Francis, and he said, "Yes, that's interesting." And a few weeks later, I was in a session with The Weeknd and I was trying to get him on the song from my album and I decided this was the one I was going to play — this horribly weird-sounding demo.

It was the most terrifying moment on Earth. It's like playing someone the first thing you've ever played on the guitar, or like, "Hey, I just discovered a piano, you want to listen to a thing I just recorded on the piano?" And I played him this thing and it sounds so weird and so distorted, it's the most confusing thing to listen to. On top of that it has a thing in the middle of the song that happens every two seconds — these beeps — the most obnoxious thing you ever listened to in your life. And I played it for him and then I didn't really look back, because I was a little scared to see his reaction. Then I just heard him singing ... he really liked it and started singing along to it.

It kind of felt like when I was doing my first record, when I just stumbled upon something and did not really know what I was doing. But this time I stumbled, and while I was falling awkwardly to the floor I kind of just last-minute threw it to one of the greatest artists I've ever worked with. And it worked out.