Accessibility links
House Passes GOP Health Care Bill, The First Step In A Longtime Pledge To Dismantle Obamacare Passage in the House is the first step in fulfilling the GOP's longtime pledge to dismantle Obamacare. The president praised House Speaker Ryan as a "genius" for engineering the legislative victory. 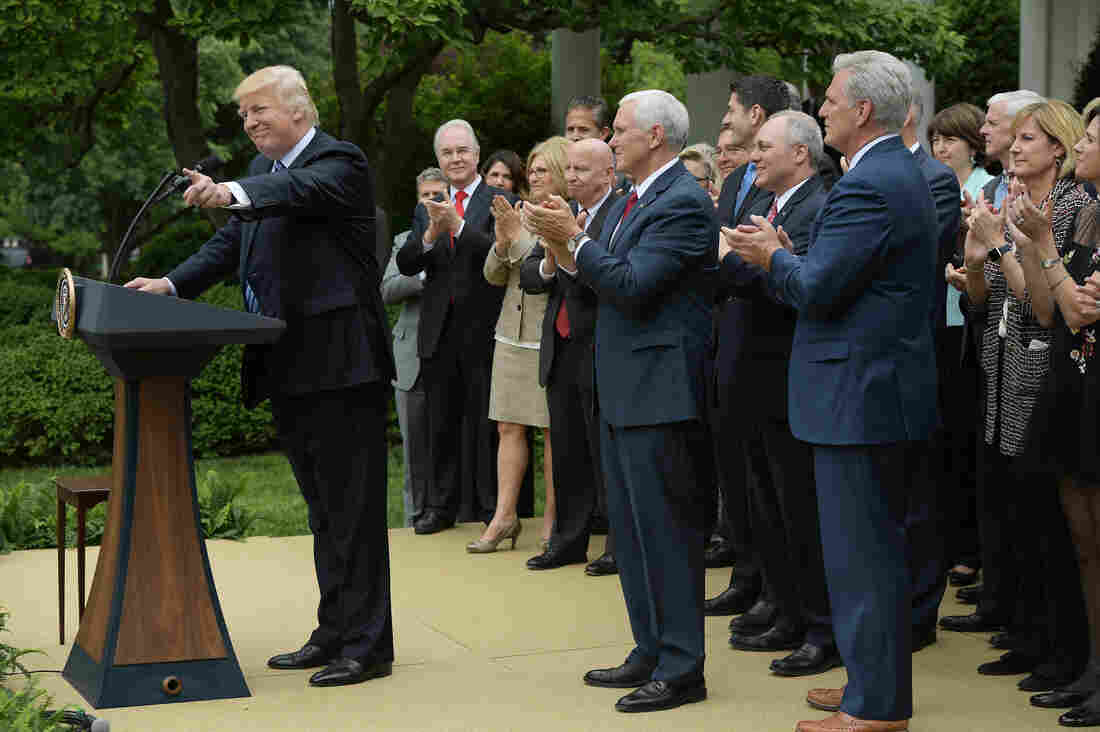 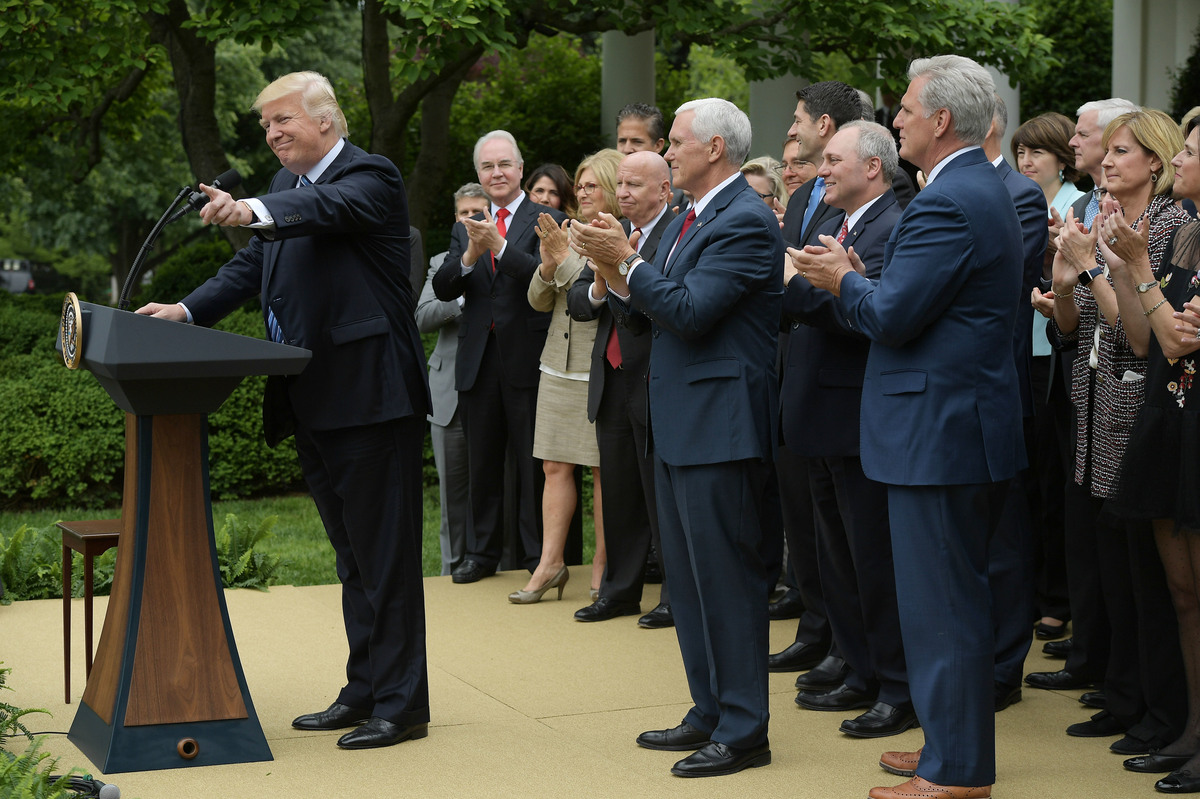 The House voted Thursday to narrowly approve a Republican-drafted measure that would eliminate many of the provisions of the Affordable Care Act — the first step toward keeping one of President Trump's campaign pledges and a victory for GOP lawmakers who have long railed against Obamacare, as the ACA is commonly known. The vote was 217-213.

The measure moves to the Senate, where its fate is far from certain — and where top lawmakers in both parties are already signaling that there is a long legislative process ahead.

After passing the measure, House Republicans jumped on buses for a quick trip to an unusual victory lap event in the White House Rose Garden — given that the measure has a long way before it actually becomes law.

GOP Expected To Pass Its Health Care Bill At Long Last, But Still A Long Way To Go

President Trump promised that premiums and deductibles will be coming down under the GOP plan and said that he feels "confident" the measure will make it through the Senate. "It's going to be an unbelievable victory when we get it through the Senate," he added. And Trump praised House Speaker Paul Ryan as "a genius," for engineering Thursday's legislative win.

Speaking after Trump in the Rose Garden, Ryan asserted the GOP bill was "the beginning of the end of Obamacare."

While Republicans praised the measure, Democrats had accused the GOP of ramming the bill through the House without fully understanding its provisions or its implications.

The bill included last-minute amendments designed to draw votes from the most conservative House Republicans in the House Freedom Caucus as well as from their more moderate counterparts.

The changes were necessary after the original bill was pulled from the floor in March when it became apparent it would not pass. And last week, GOP leaders considered bringing it back, but then decided not to risk another vote.

Republican members had their arms twisted by President Trump in phone calls and attended a last-minute pep rally Thursday morning, in which GOP House leaders reportedly told them it was "time to live or die by this day."

The measure, known as the American Health Care Act, was called "a monstrosity" by House Minority Leader Nancy Pelosi, who said centrist Republicans who voted for the bill will have "walked the plank from moderate to radical," adding, "you will glow in the dark" after voting for the bill.

The House voted on the bill without any knowledge of how many Americans will be affected, or the measure's price tag. That's because the Congressional Budget Office, the official scorekeeper, hasn't had a chance to analyze the amended bill. But the CBO estimated an earlier version of the measure would mean 24 million people could lose their insurance.

But we do know the bill would cut taxes imposed by the Affordable Care Act and slash funding for Medicaid, which was expanded under the ACA, by more than $800 billion. It would also allow states to seek waivers for many of the patient protections in Obamacare, including those provisions intended to help people with pre-existing conditions.

Winners And Losers Under The House GOP Health Bill

The measure does provide $8 billion for states to set up high-risk pools to cover those with pre-existing conditions who are unable to find affordable coverage on the open market. That last-minute addition was key to winning support from some House Republicans who were especially concerned about coverage for pre-existing conditions. But critics say it is woefully short of the amount of money actually necessary to guarantee affordable coverage.

An array of medical groups, led by the American Medical Association, had opposed the measure. In a statement Wednesday, AMA President Andrew Gurman said, "None of the legislative tweaks under consideration changes the serious harm to patients and the health care delivery system if AHCA passes. Proposed changes to the bill tinker at the edges without remedying the fundamental failing of the bill — that millions of Americans will lose their health insurance as a direct result of this proposal."

The retirees' group AARP also had opposed the GOP bill.

Speaking after the House vote Thursday, a representative for hospitals across the country expressed concern about the prospect that millions could lose their insurance coverage. "The real impact ... it's on the people we take care of and the communities we serve," Rick Pollack, president and CEO of the American Hospital Association, said on NPR's All Things Considered. "And when tens of millions of additional people will be uninsured and lack coverage, that's a real concern to us. When those individuals don't have access to preventative care, to prevent them from ending up in emergency departments, that's a concern to us."

But Republicans have pointed to the number of insurance companies who have pulled out of state-run exchanges, leaving consumers with few choices and rising prices for health insurance in many states. "This is a crisis," Ryan said as the bill was debated on the House floor prior to passage, "that is happening right now."

"A lot of us have waited seven years to cast this vote," Ryan added. "A lot of us are here because we promised this vote."

Whether the Senate will go along with the House measure is another story. The White House claims of victory notwithstanding, the Senate is taking a much different approach to the legislation. Senate Majority Leader Mitch McConnell says the chamber will first await the CBO analysis before proceeding. There is also some skepticism among Senate Republicans over the House-passed bill. South Carolina Republican Lindsey Graham tweeted before the House vote "a bill — finalized yesterday, has not been scored, amendments no allowed, and 3 hours final debate — should be viewed with caution."

Senate Republicans, in fact, are working on their own health care overhaul. Senate Health Committee Chairman Lamar Alexander of Tennessee said while he congratulates the House on passage of its bill, the Senate "will take the time to get it right."

In a statement, he said goals for the Senate legislation included "gradually giving states more flexibility on the Medicaid program, but doing this in a way that does not pull the rug out from under people who rely on Medicaid," and "making sure those with pre-existing conditions have access to insurance."

As in the House, Senate Republicans will be walking a narrow and obstacle-laden path. They're hoping to write a bill that complies with the requirements of the reconciliation process, which allows for passage with a simple majority. Senate Republicans hold 52 seats so they can afford few defections. Using reconciliation also means the bill's provisions must be limited to tax and spending changes. If the Senate parliamentarian rules any of the bill's provisions out of order, it may allow Democrats to require a 60-vote threshold for passage.

Senate Minority Leader Charles Schumer said in a statement that the House bill "is going nowhere fast" in the Senate, and warned Senate Republicans not to follow their House colleagues "over a cliff." Instead, Schumer called on Republicans to "work with Democrats to improve our healthcare system in a bipartisan way."

Still, the House vote may provide some momentum behind Senate Republicans, although their version may look starkly different than what came out of the House.