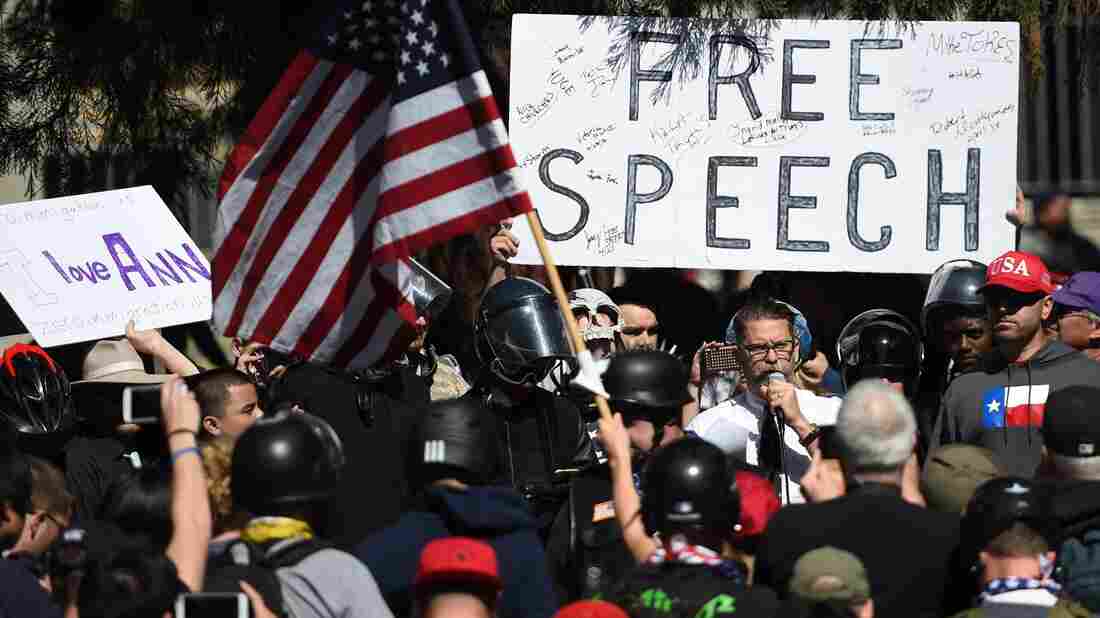 Vice Media co-founder and conservative speaker Gavin McInnes reads a speech written by Ann Coulter to a crowd during a conservative rally in Berkeley, Calif., on April 27. Coulter canceled a planned appearance at the University of California, Berkeley, saying she had lost the backing of the groups that had sponsored her talk. Josh Edelson /AFP/Getty Images hide caption 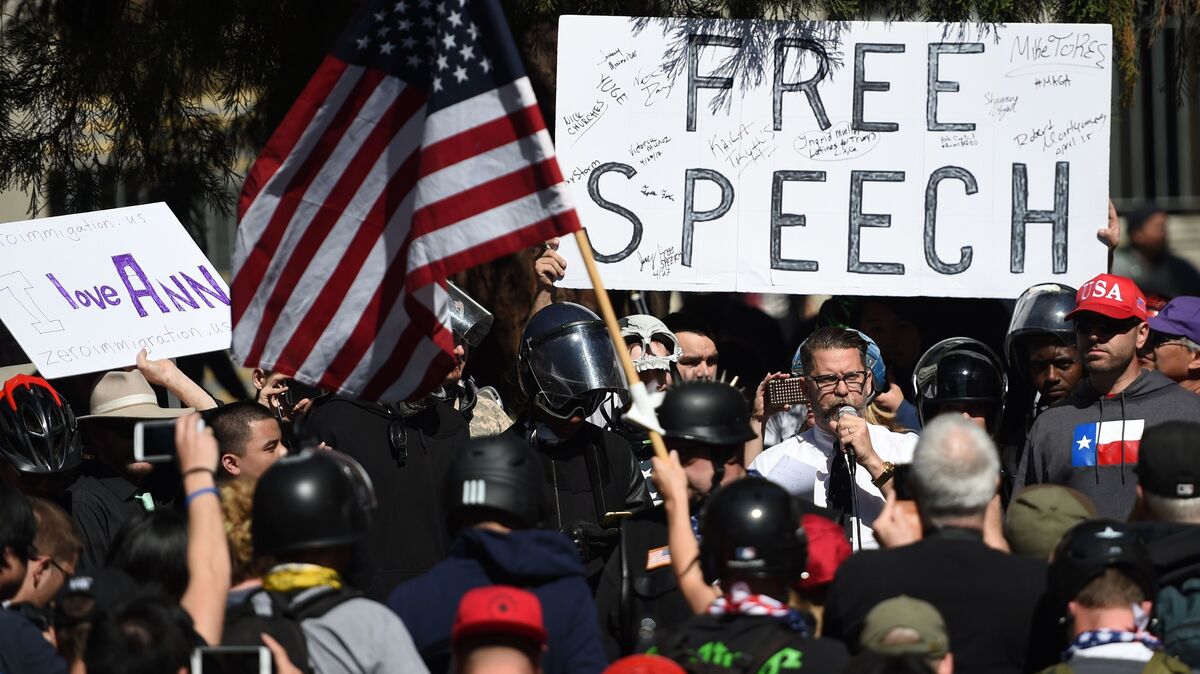 Vice Media co-founder and conservative speaker Gavin McInnes reads a speech written by Ann Coulter to a crowd during a conservative rally in Berkeley, Calif., on April 27. Coulter canceled a planned appearance at the University of California, Berkeley, saying she had lost the backing of the groups that had sponsored her talk.

It's becoming a pattern on campuses around the country. A speaker is invited, often by a conservative student group. Other students oppose the speaker, and maybe they protest. If the speech happens, the speaker is heckled. Sometimes there's violence.

In other cases — as with conservative commentator Ann Coulter at the University of California, Berkeley last week — the event is called off.

Now, a handful of states, including Illinois, Tennessee, Colorado and Arizona, have passed or introduced legislation designed to prevent these incidents from happening. The bills differ from state to state, but they're generally based on a model written by the Goldwater Institute, a libertarian think tank based in Arizona.

The model bill would require public universities to remain neutral on political issues, prevent them from disinviting speakers, and impose penalties for students and others who interfere with these speakers.

Attorney Jim Manley, who co-wrote the bill, says the institutional neutrality provision serves as a reminder to public universities that they are funded by taxpayers, who shouldn't be forced to subsidize speech that they disagree with. He says the other provisions are important because the students who have engaged in these protests have not been adequately disciplined by universities.

"We think those are incredibly important because what we've seen is that universities haven't really taken this seriously and discipline students who engage in these sorts of belligerent protests that are designed not to present an alternative viewpoint, but to shut down the speaker," Manley says.

The Long, Necessary History Of 'Whiny' Black Protesters At College

In a Wall Street Journal column, Stanford University professor Peter Berkowitz echoes this point by arguing universities are slow to shut down these protests because they often want to protect minority groups who may be offended by a provocative speaker.

"The yawning gap between universities' role as citadels of free inquiry and the ugly reality of campus censorship is often the fault of administrators who share the progressive belief that universities must restrict speech to protect the sensitivities of minorities and women," Berkowitz writes. "They often capitulate to the loudest and angriest demonstrators just to get controversies off the front page."

The goal of this model bill is to protect free speech on campus broadly, Manley says, so it provides protections for both invited speakers and students who want to protest. He says the discipline provisions work by shutting down those activities that are designed to prevent an exchange of ideas.

"If I started yelling every time you asked a question, that wouldn't be a very good way to have a conversation," Manley says. "And that's basically what's happening with these shout-downs and violent protests on campus, and those are the sorts of things that our bill goes after and tries to prevent."

North Carolina is one of the states considering a campus free speech bill, but state Rep. Verla Insko, a Democrat, criticized the legislation as an unnecessary "regulation of a constitutional right."

Manley says the legislature's job is to protect constitutional rights, which is what this bill is designed to do. He argues collaboration between legislatures and universities is needed to protect free speech on campus.

Hate Speech And The Misnomer Of 'The Marketplace Of Ideas'

Critics say this kind of legislation could hinder a university's ability to regulate hate speech on campus, and Manley says this is possible because hate speech is not well-defined in the law.