Accessibility links
On Health Care, Can Mitch McConnell Ultimately Save Paul Ryan, President Trump And The GOP? The leaders and rank-and-file of the House know that what they have done so far is not yet law. It may not even qualify as a rough draft. Giant steps remain, and some in the GOP may well be grateful. 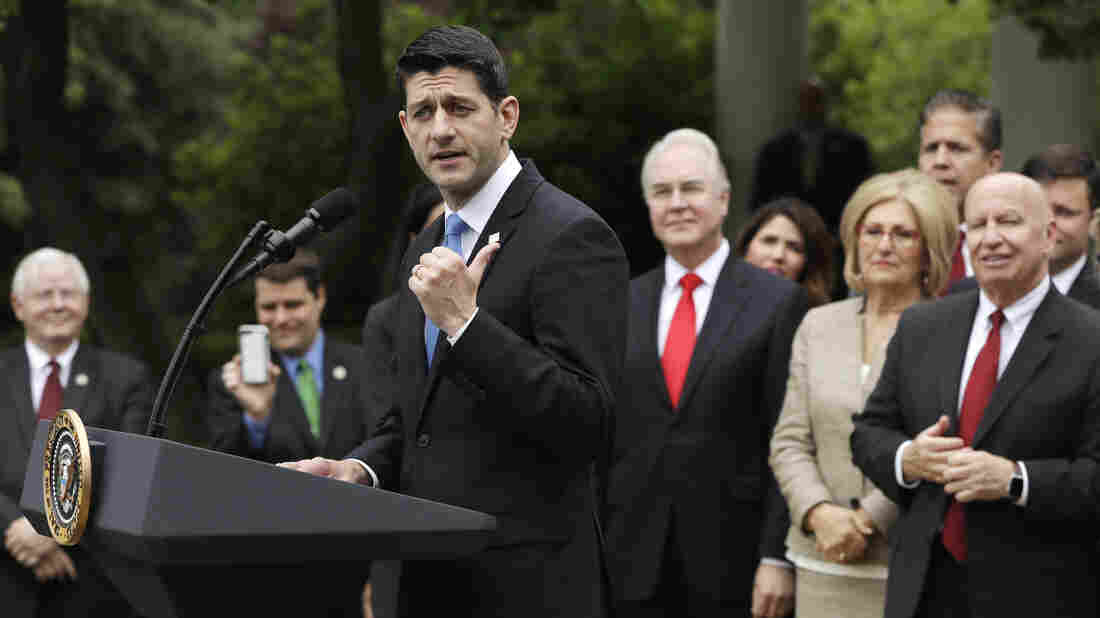 House Speaker Paul Ryan speaks in the Rose Garden at the White House on Thursday, May 4, 2017, after the House passed a Republican health care bill. Evan Vucci/AP hide caption 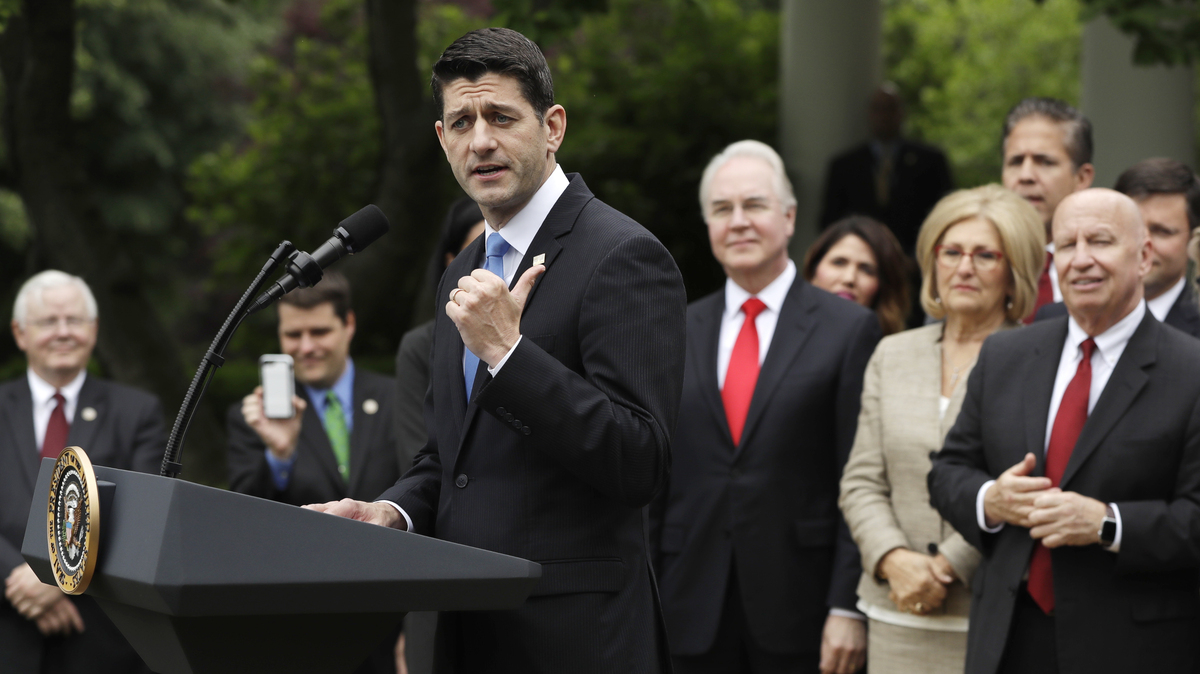 House Speaker Paul Ryan speaks in the Rose Garden at the White House on Thursday, May 4, 2017, after the House passed a Republican health care bill.

In the Rose Garden last week President Trump and the House Republican leadership celebrated their vote to repeal and replace the Affordable Care Act as though it had actually repealed and replaced the 2010 law colloquially known as Obamacare.

It had not, of course. Several more giant steps remain in the process. And more than a few of these same Republicans may well be grateful.

The House, its leaders and rank-and-file alike know that what they have done so far is not yet law. It may not even qualify as a rough draft.

In reality, the House has shoveled a mammoth pile of problems off its porch and onto that of the U.S. Senate. That chamber has announced it is writing its own bill. That is common knowledge, and more than a few House votes were cajoled with assurances that "the Senate will fix" this problem or that.

For those concerned about the policy itself, the prospect of the Senate taking over was a mixed bag. Would they make it better in fact?

Such debates aside, most of the House members were asking: Would the Senate make it less explosive politically?

Here's how it works: If both House and Senate pass their own separate bills, there will be a conference committee that strives to "compose their differences." (This might take weeks.) The report on this hybrid must then pass a revote in both chambers in identical form, as the Constitution demands.

GOP Passes Its Health Care Bill At Long Last, But Still A Long Way To Go

So whatever happens now, the House folks figure the spotlight is shifting to the Senate. And it ought to stay there.

Option One: The Senate can fail to pass anything at all. Then the whole enterprise dies on their doorstep, just as it seemed likely to do on the House's doorstep last week.

Option Two: The Senate can also pass something that is so wildly different from the House bill that the conference cannot produce a hybrid of the two. That too could be blamed on the Senate. Like, hey, everything was fine when we did it in the House back in May; didn't you see that celebration in the Rose Garden?

Option Four: If the conference report does pass the Senate, well maybe then the House can approve it and point a finger at the changes the Senate insisted on.

Option Five: The Senate approves the conference compromise and it fails in the House. Uh-oh. But, think again, this can be sold as the House playing Horatius at the Bridge — the valiant tribune of the people. Wouldn't it be the Senate in this scenario that was guilty of ruining a perfectly good House product? (See reference to Rose Garden celebration above.)

Any way you look at it, the House is better off with the ball in someone else's court.

In a way, this reliance on the Senate to save the day dovetails with the confidence in the Senate shown by Obamacare's defenders.

They have a litany of reasons to believe the Senate will not gut the Affordable Care Act (the law's formal name and preferred by many). It begins with the close partisan division of the Senate, where Republicans have just 52 seats and so just two votes to spare. (Vice President Pence would be expected to break any tie in favor of the GOP.)

If three or more Republicans turn against any version of the repeal-and-replace bill in the Senate, the bill falls.

Moreover, it is possible the Senate parliamentarian will limit how much of the legislation can be passed by simple majority. Matters in the bill that are not strictly tax-and-spend issues are not eligible for simple-majority votes, which are reserved for budgets and fiscal matters that the chamber needs to keep moving (without filibusters).

Democrats in 2010 finished passing the ACA using these same simple-majority procedures for part of it — but not all.

If Republicans need to move some elements of repeal-and-replace by the usual procedure, they will need not 50 votes but 60. That would require perfect unity among the Republicans and at least eight Democratic crossovers. Right now that is extremely hard to imagine.

Considering all this, and adding in the evident distaste of senators in both parties for what the House did, what chance does repeal-and-replace have in the Senate? It might seem to be slim to none.

But not so fast. All these difficulties are real, but none is insurmountable. The Senate is not the end of the line for repeal-and-replace, it's just the graveyard for the House version just passed.

The right kind of leadership, wily and shrewd and steeped in Senate micro-maneuvering, might just find a way to bring a few Democrats on board. And if you are looking for that kind of leadership, untrammeled by ideological purity or other forms of fuzzy thinking, you need look no further. I give you Senate Majority Leader Mitch McConnell, Republican of Kentucky.

It would require negotiating with those Democrats; of course, it would require giving them something. And anything of value and substance might cost you some Republican votes. The calculus will need to be fine indeed.

Winners And Losers Under The House GOP Health Bill

But, in the end, there will be enormous pressure from the history of the last eight years, from the expectations of the broader ranks of Republicans, from the donors and the volunteers and the true believers. They do not want to be told that Obamacare cannot be repealed.

And do not underestimate the power of momentum, which is what the House just snatched back from the vanishing point. Do not underestimate what President Trump may be able to do in rallying support for whatever emerges as the party's legislative product in the end.

It may not matter at all what is in the actual bill. Trump on Thursday embraced the House's market-based, tax-cutting, Medicaid-shredding approach in the afternoon. In the evening, he told the Australian prime minister his country had a better health care system than the U.S. — and Australia has government-run, single-payer health care for all.

Given all these realities, it is possible the Senate could surprise us all with something that becomes The Bill, and that will then be The Only Way. And with the combined energy and will of the present Republican moment, that bill may be irresistible in conference and in the consideration of that conference's report.