Accessibility links
Coastal Pollution Research Is On Trump's Chopping Block The Sea Grant program, which funds research on coastal environments, is slated by White House for elimination in 2018. If it goes, a project that finds leaking septic tanks goes down the drain, too.

Listen · 4:44 4:44
Trump's Budget Would Eliminate A Key Funder Of Research On Coastal Pollution 4:44 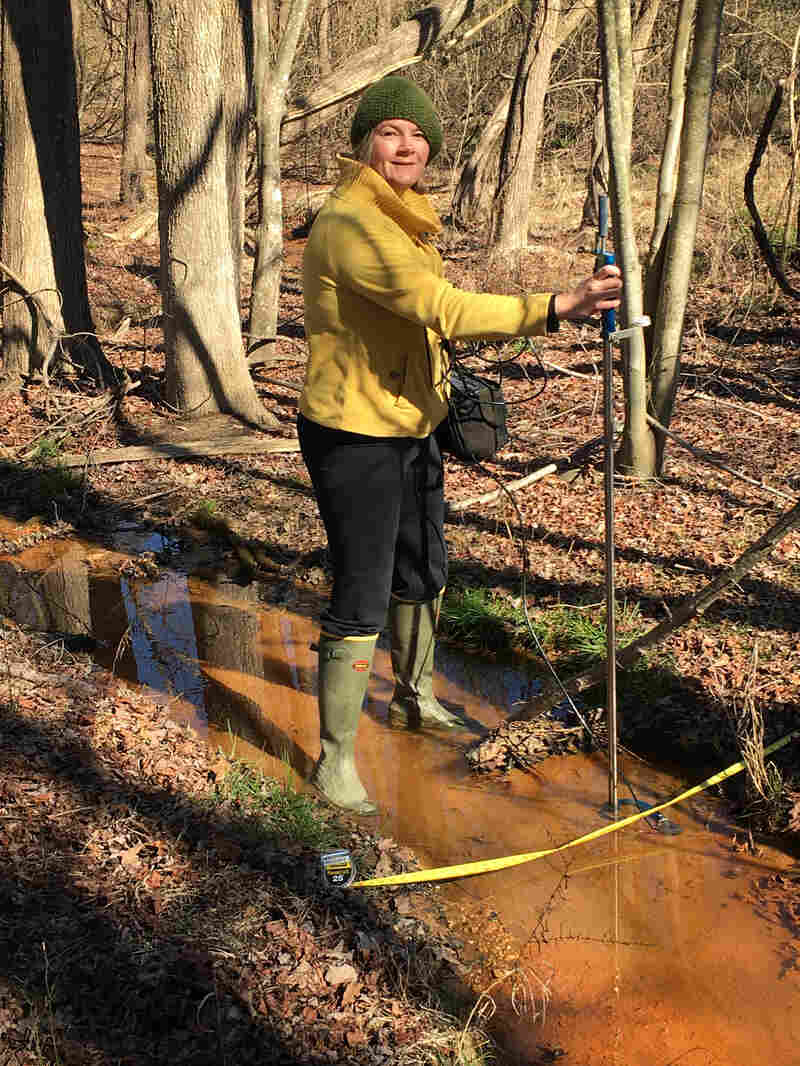 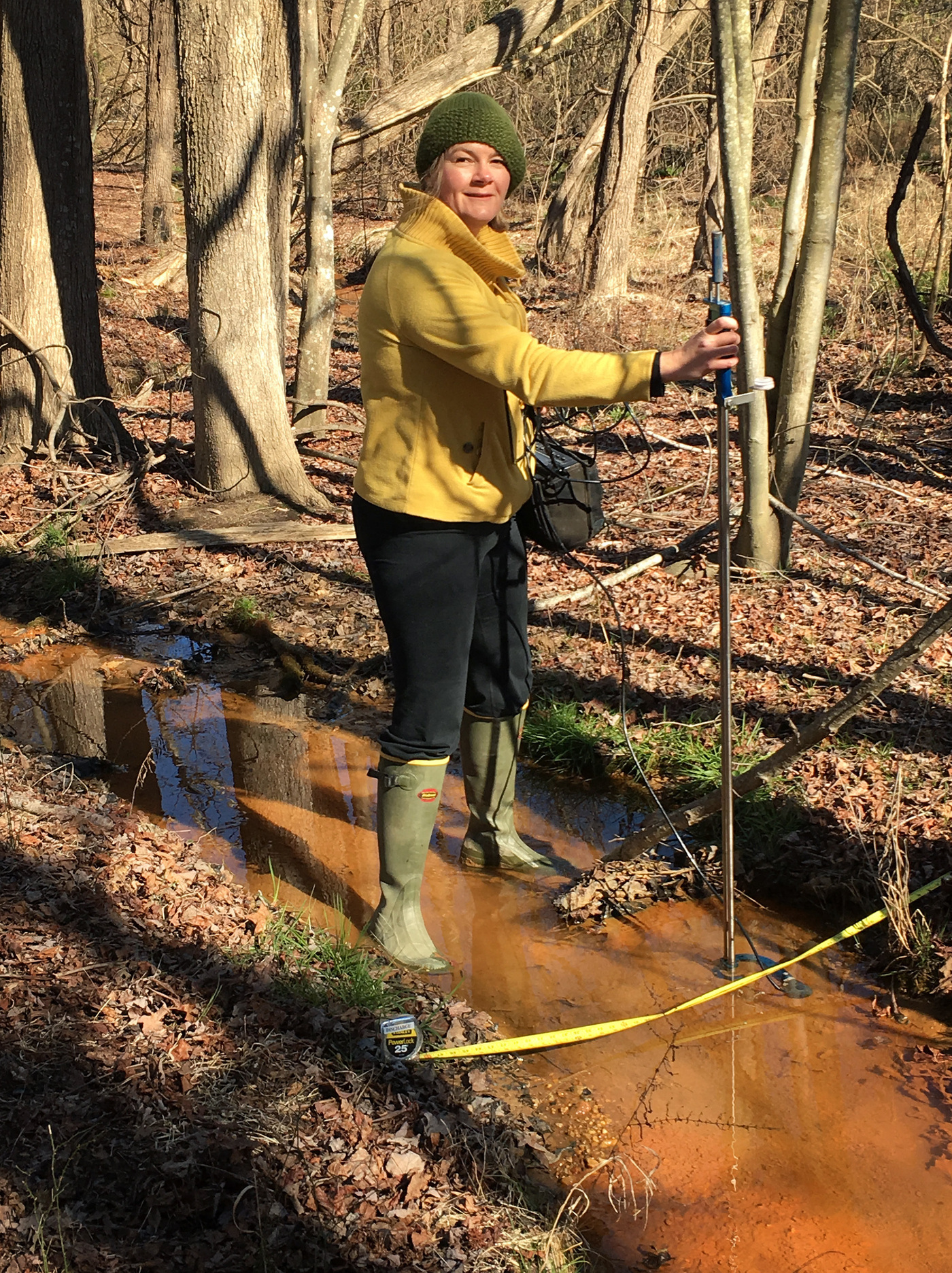 For 51 years, a small federal program has been paying scientists to keep American waterways healthy. It's called Sea Grant — part of the National Oceanic and Atmospheric Administration — and President Donald Trump"s proposed budget for next year would eliminate it.

Sea Grant funds support more than 800 projects around the country. To find out what would be lost if it's defunded, let's start in a yard next to the Severn River in Maryland. It's my yard. There's a white tube sticking up from the ground. The ubiquitous icon of suburbia — the septic tank — lies underneath.

A lot of septic tanks break down, often invisibly, and what's inside pollutes waterways. Even properly functioning tanks leak a little. When they do, some of the sewage inside seeps invisibly downhill to, in my case, the Severn River. Once pollutants are in the river, it's really hard to tell where they came from. Is it from fertilizer? Livestock waste? From burning coal or gasoline? Sewage treatment plants? Or from the ubiquitous septic fields in suburban America?

There are some people who think they can track down the septic-tank portion of what are referred to as nonpoint sources of pollution — the pollution that comes from diffuse sources via snowmelt or rain runoff, say, rather than from, factories or sewage treatment plants. You might think of these trackers as "septic detectives."

"Septic detectives?" asks Lora Harris. "I haven't heard that one." She prefers to call herself a coastal ecologist; she's an associate professor at the University of Maryland's Center for Environmental Science. But the day I meet her in southern Maryland, she is, in fact, chasing septic waste along a wooded gully behind a housing development. She's looking for a particular kind of pollution — nitrogen.

We bushwhack through underbrush to find a small stream, just a few inches deep, trickling through the gully. Empty beer cans and candy wrappers suggest it might be a neighborhood hangout. Harris and colleague Andrew Heyes start filling bottles with stream water, being careful not to stir up the muck at the bottom.

Harris explains that nitrogen in a river or bay is fine in the right amount. But it's a nutrient for algae, and too much nitrogen leads to algal blooms. When these big blooms of algae die, their decomposition sucks oxygen out of the water in a chemical reaction, creating low-oxygen conditions that harm or kill marine life — a dead zone.

In fact, excess nitrogen is the single largest pollution problem in coastal waters, from the Chesapeake Bay to the Gulf of Mexico. And everyone blames someone else for it.

"[Officials] are keenly interested to know if the water quality problems are because of the septic systems, the farms, or if they're because of problems happening all the way up in Pennsylvania," Harris says.

So her team is developing a chemical fingerprint that could pinpoint nitrogen pollution from septic tanks. That would help local officials determine at least one of the sources, and work with communities to stop it. 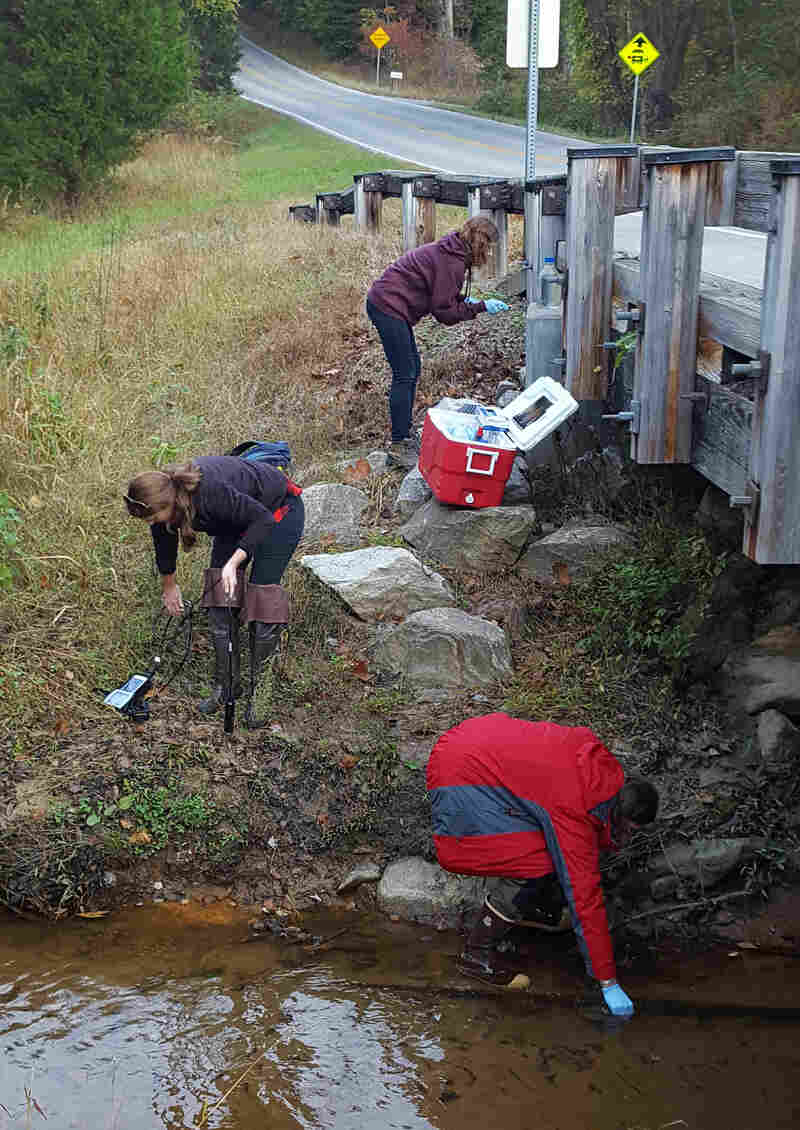 (From bottom to top) Chemist Michael Gonsior, from the University of Maryland's Center for Environmental Science, works with researcher Melinda Forsyth and graduate student Katie Martin to gather and check water samples near the Chesapeake Bay, on Cocktown Creek. The team's checking for environmental indicators like salinity, dissolved oxygen, temperature and pH. Courtesy of University of Maryland Center for Environmental Science hide caption 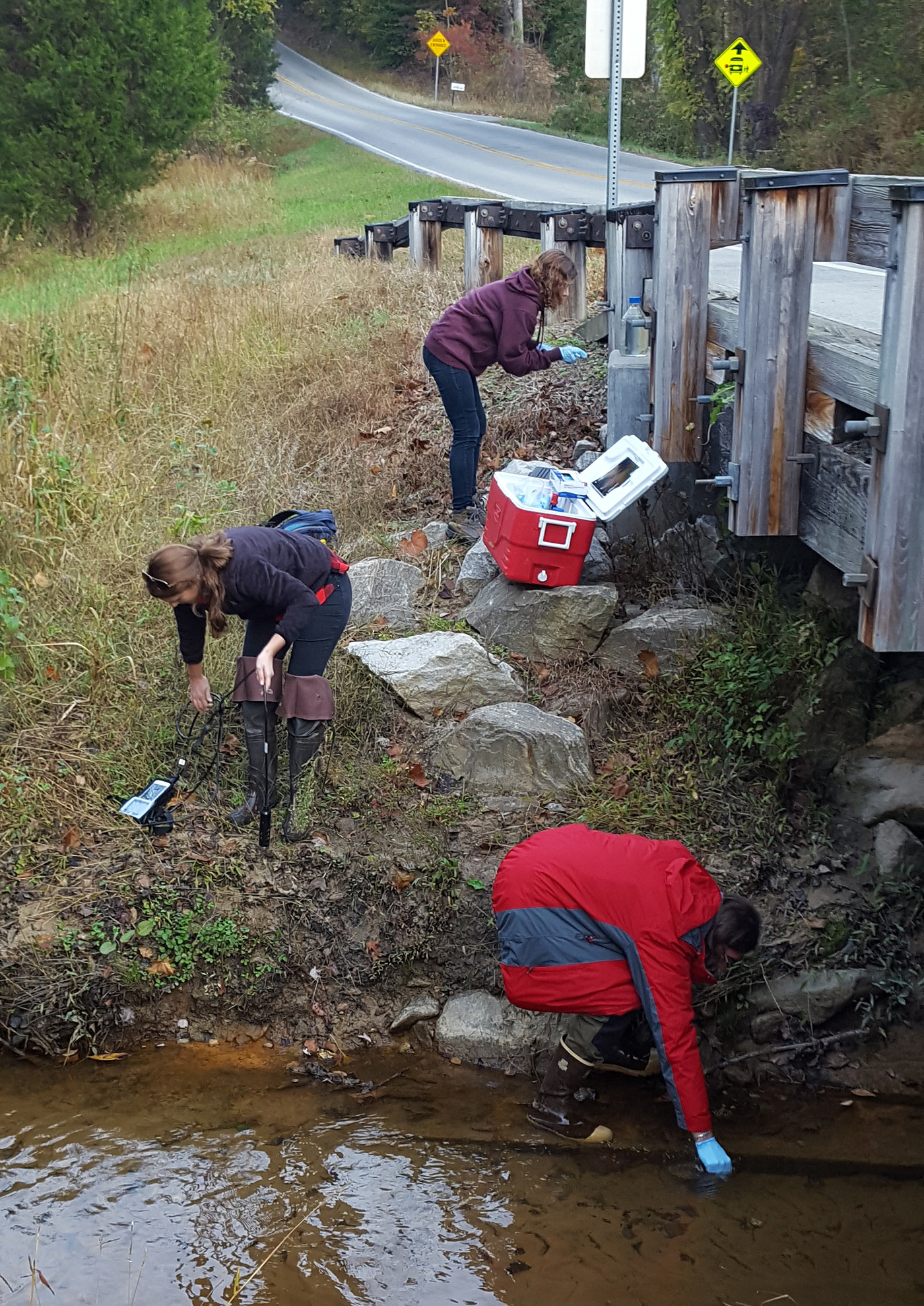 (From bottom to top) Chemist Michael Gonsior, from the University of Maryland's Center for Environmental Science, works with researcher Melinda Forsyth and graduate student Katie Martin to gather and check water samples near the Chesapeake Bay, on Cocktown Creek. The team's checking for environmental indicators like salinity, dissolved oxygen, temperature and pH.

Courtesy of University of Maryland Center for Environmental Science

Harris spends a lot of time in waders, hopscotching all over the Chesapeake Bay area to sample water, mostly near housing developments. Her research colleague Andrew Heyes explains that the septic fingerprint they're working on targets more than just nitrogen compounds. It's a cocktail of chemicals from homes — and the human body.

"Things like caffeine," Heyes says. "Some of the compounds you use in your soap, pharmaceuticals — all the things that you flush down the toilet or pass through your body end up going through the septic system."

With a boxful of water samples in the back of a jeep, Harris and Heyes head back to the UMCES lab, which sits on a peninsula overlooking the Chesapeake Bay. Chemist Michael Gonsior oversees this part of the work. Gonsior studies what's in water, right down to the molecular level. "The complexity in the water, even in natural systems, is absolutely mind-bogglingly, extremely diverse," Gonsior says. "And I love complex mixtures — it's my thing." Not surprising, then, that he spends his spare time brewing beer.

Gonsior has identified some 15,000 compounds in septic water. He shows me a paper plot generated by a mass spectrometer. It displays different concentrations of compounds as peaks and valleys. The plot looks completely different from a plot of bay water or of treated sewage. That's the fingerprint, and Gonsior says it's good enough to pick septic waste out of the lineup. "Because you really want to say, 'OK, this stream here is surely impacted by septics."

The team still has to prove their technique is iron-clad. Whether they'll get a chance to do that depends on continued funding through Sea Grant. The Trump administration plans to zero-out funding by the start of 2018. So far, Congress is keeping Sea Grant running for at least the rest of this fiscal year.