Accessibility links
Condoleezza Rice: Institutions Aren't Perfect, But They're The Bedrock Of Democracy Former Secretary of State Condoleezza Rice tells NPR that America is still a "bright, shining city on the hill, not because we're perfect but because we struggle in our imperfections every day."

Listen · 7:03 7:03
Condoleezza Rice: Institutions Aren't Perfect, But They're The Bedrock Of Democracy 7:03 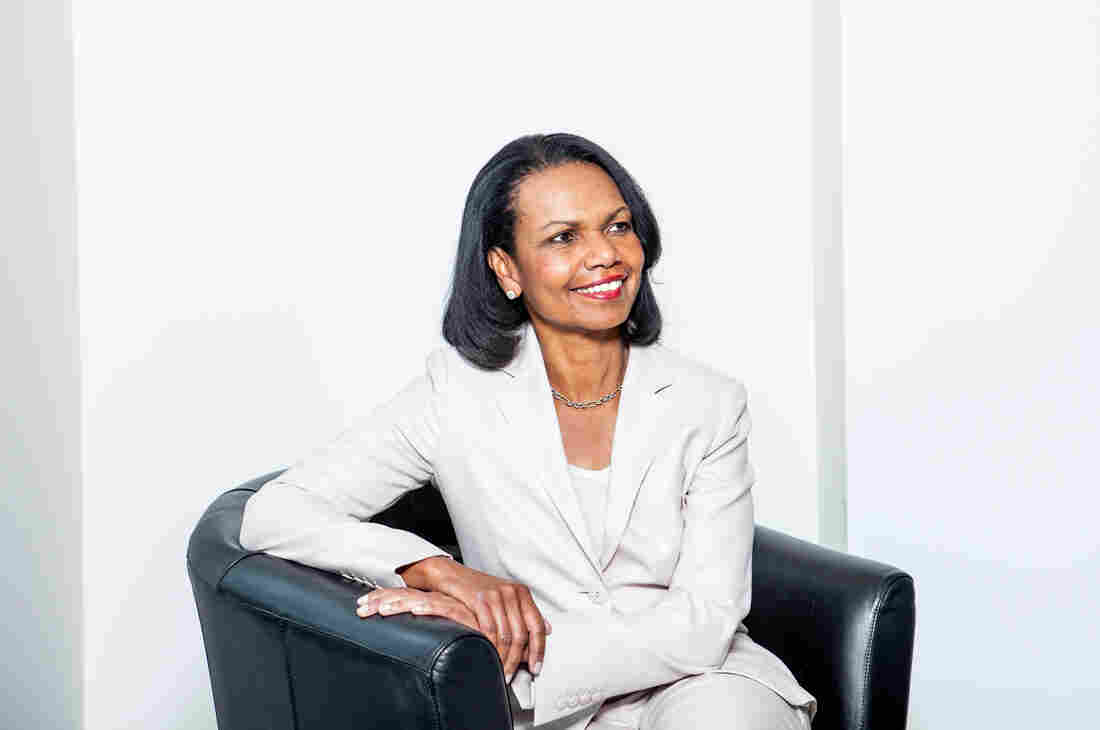 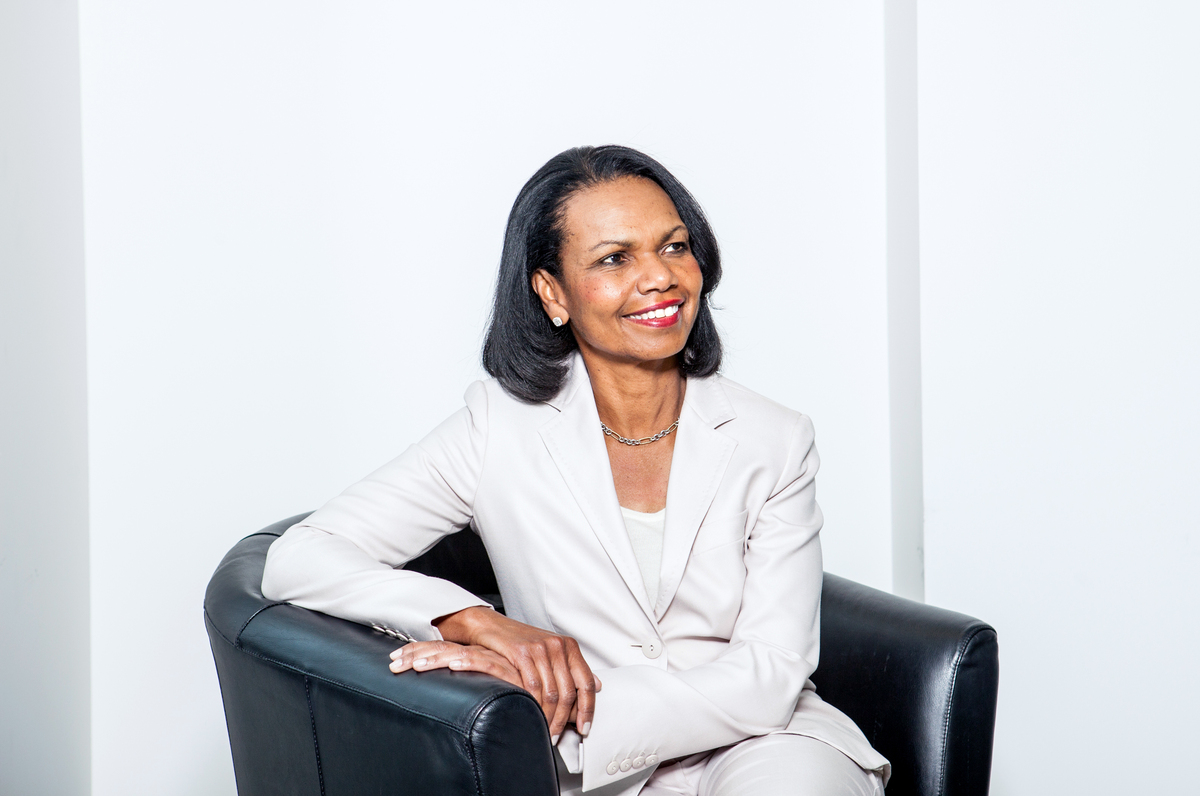 "What the American Founding Fathers understood was that institutions were built for human imperfection, not human perfection," Condoleezza Rice says.

This is part of a series of conversations on Morning Edition with politicians, writers, scientists, theologians, tech innovators and others. We're asking, "How did we get here — and where are we headed?" Out of those answers, we'll help capture this moment and how we're shaped by it, as individuals, nations and as a global civilization.

Condoleezza Rice's new book, Democracy: Stories from the Long Road to Freedom, is a full-throated endorsement of overseas engagement and democracy building. It comes at a time of widespread distrust of government and institutions.

Rice's "through line" is that institutions provide the bedrock for any successful democracy. Though institutions are built by people, she tells NPR's Rachel Martin, no country can rely on a single personality to carry it forward. The Founding Fathers knew this, she says, so they constrained the executive by embedding it in a balance with other institutions.

"What the American Founding Fathers understood was that institutions were built for human imperfection, not human perfection," she says.

Rice, former national security adviser and secretary of state under President George W. Bush, also addresses the anti-immigrant, anti-trade sentiments that have surged across the U.S. and Europe. She's worried about current widespread feelings of populism, nativism, protectionism and isolationism — which she calls the "four horsemen of the apocalypse."

"I'm concerned that the current moment might take us back to those four horsemen of the apocalypse and it didn't work out so well the last time around," she says.

On her concerns about populism, nativism, protectionism and isolationism 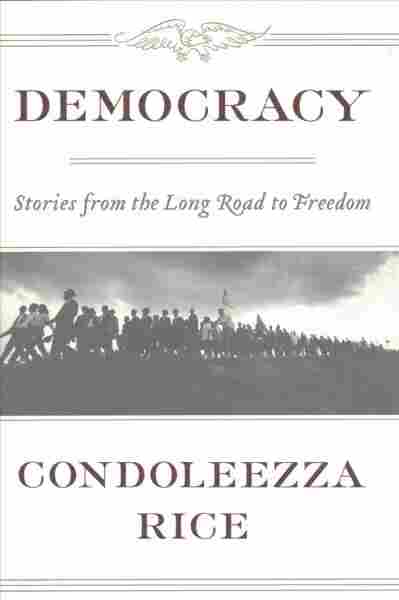 Stories from the Long Road to Freedom

We have to recognize that the reason that the global order that we've enjoyed and almost take for granted over the last several years exists is that after World War II, the United States and its allies tried to build an antidote to what they had seen between World War I and World War II. There they'd seen protectionism, beggar-thy-neighbor trading policies. So they said we'll build an open international economy. And they did that.

They had seen fear of the other, a willingness to be harsh on people just because they were different, and they had seen that authoritarian states were violent states. And so they thought — we'll support democratic peoples. And so this system, built on free markets, free trade and free peoples, and American protection, that's what got us from the end of World War II to the extraordinary events of the end of the Cold War and a system that was one of prosperity and peace for a lot of people including for the United States.

On Iraq today, a country she calls a "quasi-democracy"

It has a legislature that tries to function. It has a prime minister who is accountable. They've decided to get rid of a couple of them. But they stepped down. Arab strongmen don't normally step down. They have a very free and functioning press. But it's got a long way to go to be a consolidated democracy where the institutions fully function and can carry out what they are intended to do. But it's not an authoritarian state any longer, and it's not a totalitarian state in the way that it was under Saddam Hussein. It's very different to be Iraqi today than to be Syrian.

If I can get one point across, it's that Iraq and Afghanistan are not the primary examples of democracy promotion. We went to Iraq because we had a security problem with Saddam Hussein. Turns out it wasn't a security problem that was as imminent as we thought because of the weapons of mass destruction. With Afghanistan, we needed to get rid of the safe haven for al-Qaida after 9/11. Once we had overthrown their dictators, we had to have a view about what came after, and we believed that we would be better off to help launch them on the road to democracy. But I would never have said to President Bush "overthrow Saddam Hussein to bring democracy to Iraq," because democratic openings that come about in that way — the overthrow of a totalitarian government by external powers — it makes it really hard to make those first steps toward democracy.

History of Our Time

History Of Our Time: Making Sense Of This Moment

On whether she's concerned that President Trump has had glowing things to say about leaders of Russia, Turkey and Egypt — countries she writes "discourage us" with respect to democracies' global trajectory

Well, with [Russian President] Vladimir Putin I think we're starting to see that whatever was said in the campaign about Vladimir Putin, we're very clearly coming up against what American interests are in dealing with Russia. I thought [Secretary of State] Rex Tillerson had a great line when he said in regards to the [Syrian] chemical weapons deal that the Russians had sponsored that they were either incompetent or they weren't telling the truth. I'm not sure I would have been brave enough to say that but it was exactly [the] right thing to say to them. So the U.S.-Russian relationship is exactly where it should be. It recognizes all the difficulties and it recognizes who Vladimir Putin is. When it comes to Turkey or to Egypt, this is hard because they are allies. And so for an American president or secretary of state, the challenge is always to find a way to continue those relationships and promote those relationships recognizing the flaws and the foibles of those allies.

I would hope this — and it goes to whether it's [Egyptian President Abdel-Fattah el-]Sissi or [Turkish President Recep Tayyip] Erdogan or [Philippine President Rodrigo] Duterte, if he indeed comes — it's fine you have to talk to these people. But you can also say to them what you're doing is unacceptable and it's unacceptable for moral reasons, but I'm going to tell you it's also unacceptable because eventually it is going to bring you down.

On how Rex Tillerson's mission for the State Department — to advance America's national security and economic interests with no mention of spreading democracy — is very different from then-President George W. Bush's

Exact formulations matter here. So American national security and American economic interests, of course. Every president, every secretary of state, that is the primary goal. As you are in this job and in the work, you begin to see though that in the long run, both American economic interests and American national security are better served when there are other decent countries in the world who are both your allies and even when your adversaries are acting more decently. Because ultimately we didn't go to Germany to create a democracy. We went to overthrow Adolf Hitler. But once a democracy was there, Germany was a much bigger supporter of and helped to our national interest — both economic and security — than ever had ever been before.

On whether she craves from the Trump administration a more overt endorsement of values like democracy, freedom and liberty

I am going to answer that question for you at a later date, because it's early. I have heard expressions of why NATO matters that I didn't hear in the campaign. And NATO is, by the way, built on security, but it's also built on values. I've heard expressions about why the United States of America cannot stand by and let Syrian children be gassed by their leaders. That wouldn't have been the language of the campaign. So I'm hearing echoes of many of these values. And I believe you're going to hear more. I hope we hear more.

I think we're still a bright, shining city on the hill, not because we're perfect but because we struggle in our imperfections every day. When I was standing in the Ben Franklin Room about to be sworn in as secretary of state — by the way by a Jewish woman justice, Justice Ginsburg — with Ben Franklin looking over us, I couldn't help but think that this was a Constitution to which I was about to take an oath of allegiance that it once counted my ancestors three-fifths of a man, a Constitution that had to be referred to by Martin Luther King to say that America shouldn't be something else, just had to be what it said it was. That's a pretty powerful story of evolution. Human beings are not perfect. Their institutions are not perfect, but they have to keep trying. And America has to help people keep trying.