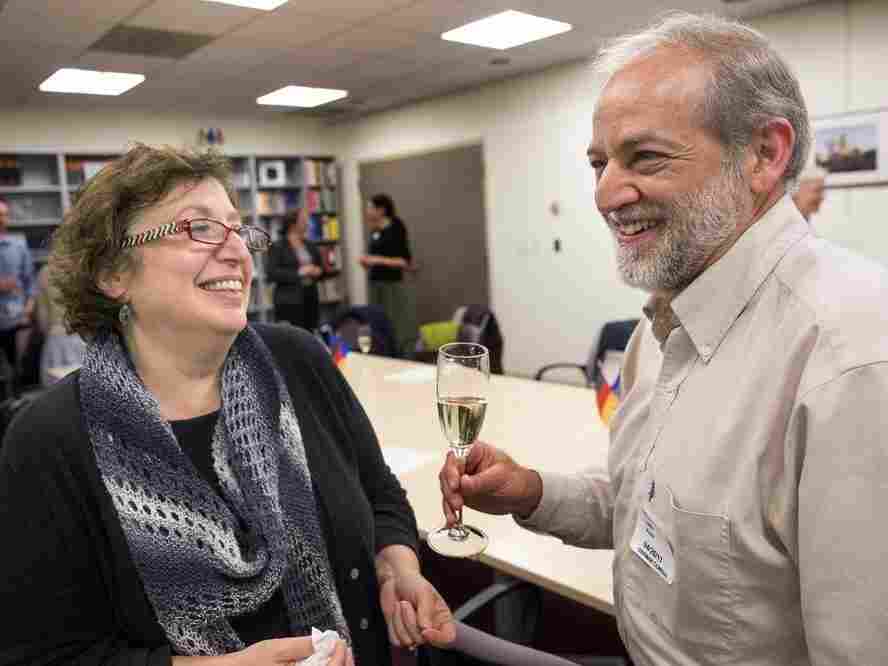 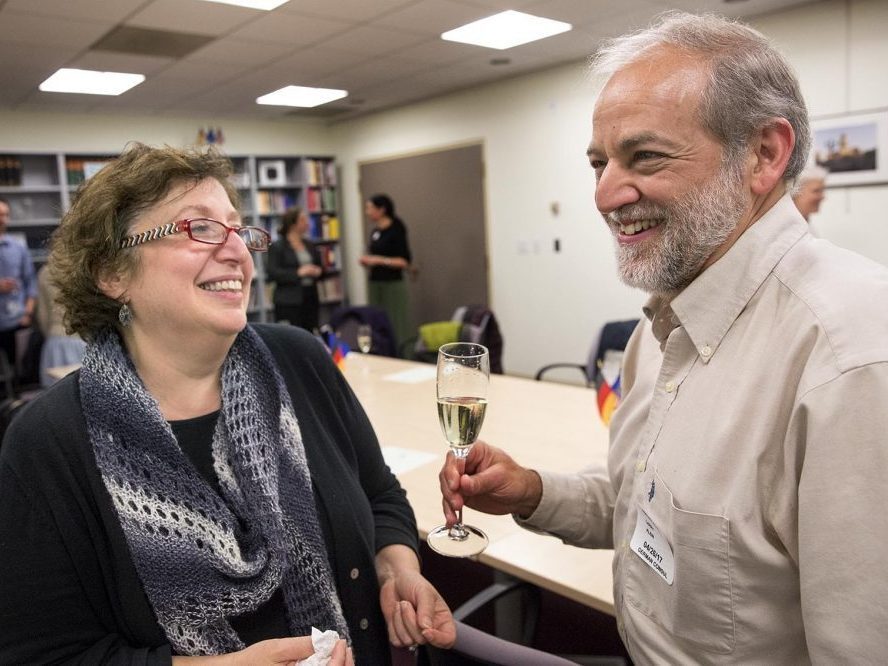 A small group of Jewish-American citizens from around New England celebrated their dual German citizenship at an understated ceremony last week at the German consulate office in Boston.

One of those in attendance was 59-year-old Larry Klein, of Newton, whose parents were German refugees from Nazi Germany. His mother and father fled to the U.S. in 1939 and 1940, respectively. His grandparents on his father's side were killed in Germany during the Holocaust and he says his family's relationship with its German heritage has always been complicated.

Reports of anti-Semitic incidents in the U.S. are up 86 percent so far this year, according to data released by the Anti-Defamation League. With that increase comes a new wave of interest in a decades-old German law reinstating German citizenship to Holocaust refugees and their descendants.

"It's kind of actually ironic and surprising to be doing this only because I grew up in a family where going to Germany was anathema," Klein said. "There's no way would we ever visit Germany. My grandmother wanted to teach us German as children and my parents told her, 'No, no don't do that.'"

A country like Germany ... espouses the beliefs and philosophy that actually is the way I'd like a country to behave. So, things come around in very interesting ways.

But Klein says he will be going to Germany — and he'll be doing so as a dual German citizen. The process he just completed is a constitutionally enshrined right established in post-World War II Germany allowing for the restoration of citizenship that was illegally deprived to German Jews under Nazi rule.

For many in the room, there's both a practical and symbolic motivation for restoring their families' German citizenship. For Klein and his wife, it means easier travel around Europe. And also, a sort of plan B — something to keep in his back pocket amid what he calls an increase in the acceptance of hate speech here in the U.S.

"The tone of this country at this point in time is disturbing. A country like Germany which, you know, has this history that obviously my family's well aware of, espouses the beliefs and philosophy that actually is the way I'd like a country to behave," said Klein. "So, things come around in very interesting ways."

Klein's been thinking about starting the process for some time, but he says it wasn't until the November presidential election that he picked up the phone.

"And so I called the consulate and she said, 'Yes, we have a program for that, and here's how you do it, and oh, by the way, you might imagine we've been very busy this week,' " Klein explained.

The increased interest has persisted.

'I Needed Someplace Else To Go'

"Although we don't have any firm statistical data on the reasons behind the application for naturalization," he said, "we have seen a considerable increase in applications since, well the autumn, or the end of last year."

The numbers have increased so much at the Boston consulate that Horlemann decided instead of individuals coming into the office and simply picking up their paperwork, there will now be regular naturalization ceremonies.

And so it is, that in a meeting room at the German consulate office in Boston, nine Jewish-American citizens gathered around a conference table. Miniature flags representing Germany, the European Union and the U.S. decorated the room, and champagne chilled in the corner.

Horlemann addressed the group from a podium: "You have made a choice and a decision to apply for the restoration of German citizenship. For some of you, it may not have been an easy decision given the reason why your families lost it in the first place and also the legacy of the Holocaust."

The decision to reclaim German citizenship was years in the making for Linda Heuman of Providence, R.I. Heuman's great-grandparents died in concentration camps and her grandparents, dad and aunt were all Holocaust refugees. Sensing a shift in the American political climate since the election of President Trump, she says the decision for her suddenly became clear. 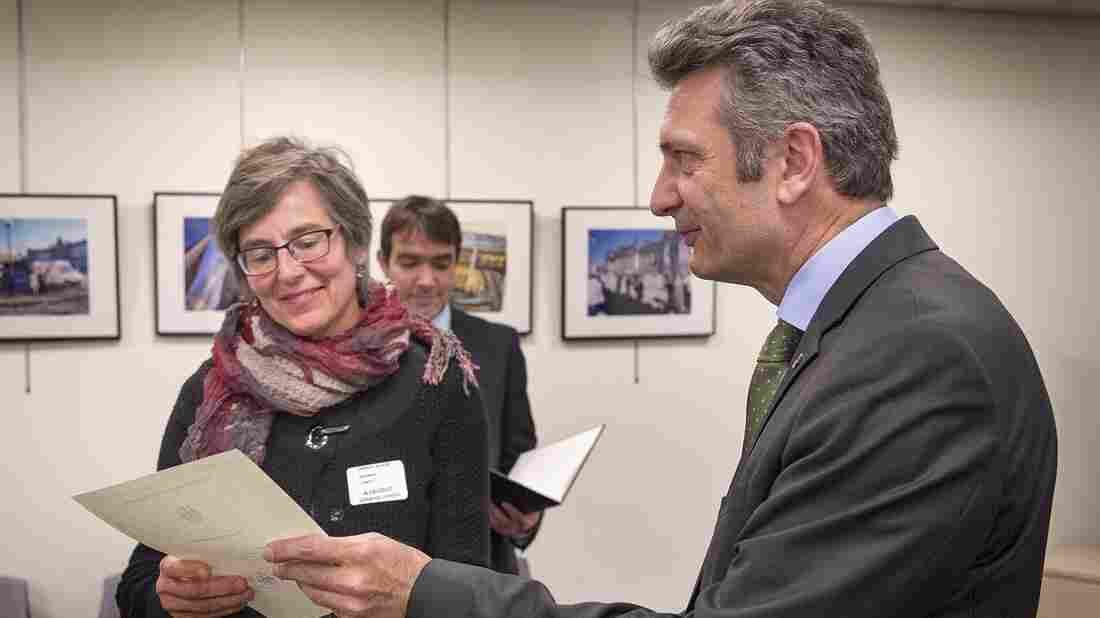 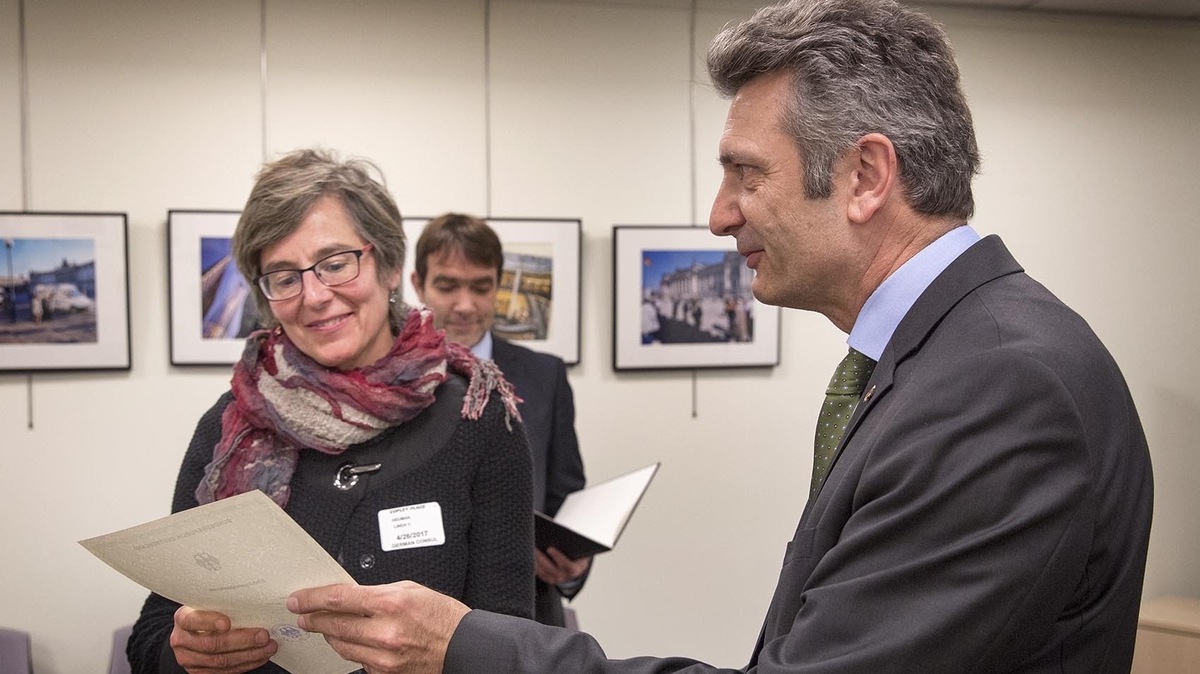 "I just instantly felt like I needed someplace else to go. I have that somewhere in my history, like that visceral knowledge," Heuman said. "With racism on the rise and anything might happen so, so that was my motivation for finally getting around to filling out the paperwork."

And filling out the paperwork brought her on a journey she may not have otherwise experienced, learning about the orphanage her father and aunt lived in for a time and becoming closer to ancestors she never had the chance to meet.

"I brought a picture with me today of my great-grandfather and I thought, you know, he lost, the family lost, everything when they left. ... I feel like today a tiny piece of everything they lost is being restored," she said.

Heuman says she plans to go back to Germany for a few months and visit the place her family called home for generations.