Accessibility links
Bedouine's 'Solitary Daughter' Defends The Sanctity Of Inner Life Los Angeles-based folk singer Azniv Korkejian says her new song, with its melancholic, orchestrated arrangement, is "a rejection of conventional romance; it's not something that I needed." 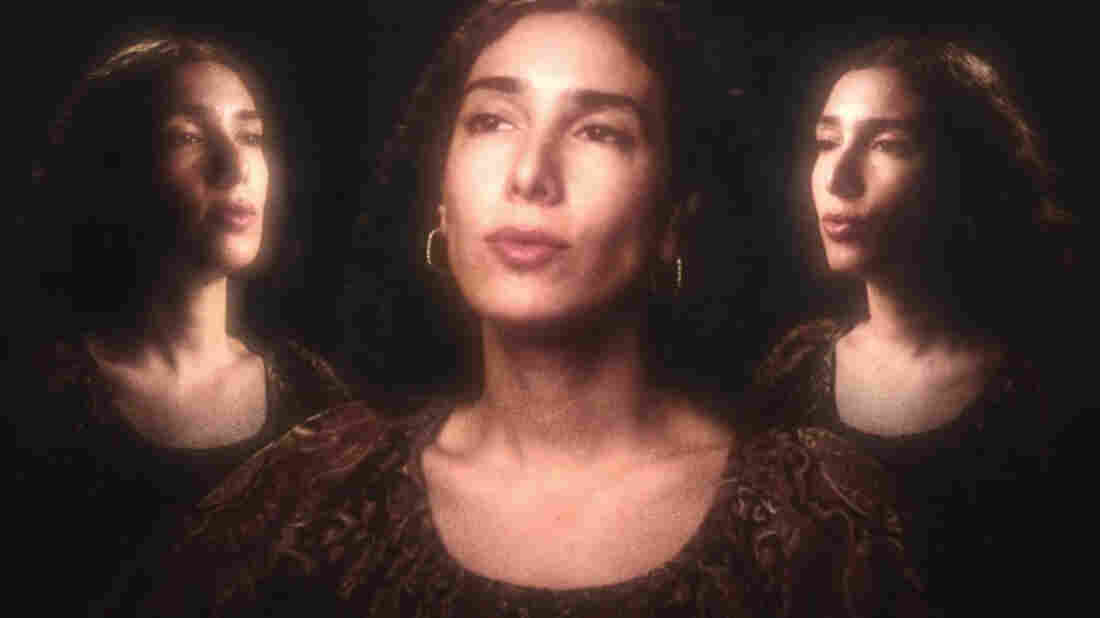 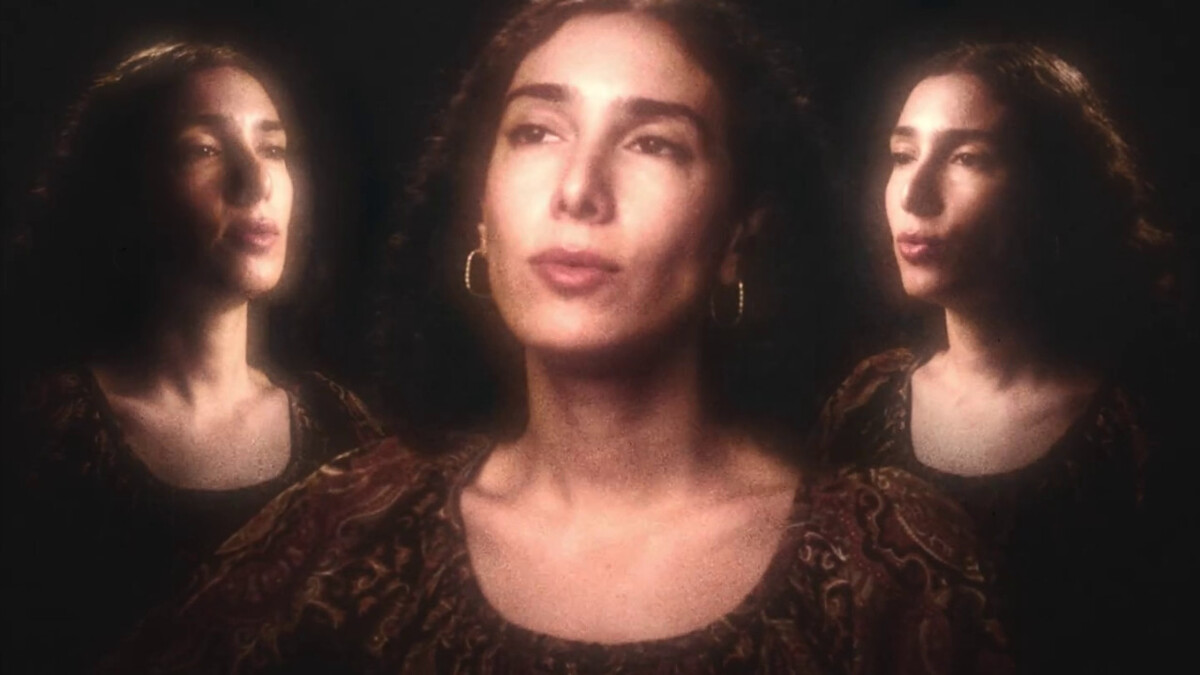 The archetype of the wanderer, that alluringly elusive figure who chases whims and sidesteps attachments, is an implicitly masculine one in the '60s and '70s bohemian folk, country and pop singer-songwriter fare that informs Azniv Korkejian's music. But she performs as Bedouine, a name that signals she's staked her own claim on the spirit of wanderlust.

Movement has been a defining feature of Korkejian's life. She was born into an Armenian family in Aleppo, Syria, who then relocated to Saudi Arabia, and later to the U.S. — first Boston, then Houston. As a young adult, she decided to try Los Angeles, followed by several Southern cities, including Savannah, Ga. (where she studied sound design), before circling back to LA, where she currently lives.

NPR called her up to ask how she's navigated journeys geographical, cultural and artistic, and to find out what she means by "Solitary Daughter," a song of seclusive elegance.

Jewly Hight: You recorded the first song for this album, "Solitary Daughter," when you came to the studio to talk with Gus Seyffert about which portable recorder you should use in the privacy of your own home. This whole process, in some ways, represents you bringing your private expression out into the open. What has that move required of you?

Azniv Korkejian: The whole process, especially before approaching Gus, felt so private. It was more just something I decided to do with my time and something I found myself connecting to. Around that time, I was exposed to Sibylle Baier's Colour Green. I heard her story, that she was writing and recording by herself on this portable reel-to-reel tape machine in the privacy of her own home. And I had just been writing so much that I thought if I didn't compartmentalize some of it, I would just drive myself crazy.

So I approached Gus. I knew enough about him to know that he was, like, the tape guy. Everything in his studio is analog. I talked to him about it. By the end of the conversation, he was like, "You know what? All my stuff is set up. Why don't you just pop in and give it a go?" I was like, "OK." I had been playing the song so much, so I felt prepared for that moment, even though I wasn't sure that was what was gonna happen. We did a few takes, but we just ended up going with the first one.

I didn't really think about what was on the other side of [the recording process]. It's not until recently that I feel like I've even stepped outside of the whole thing to look at it.

In "Solitary Daughter," you sing as someone defending the sanctity and solitude of her rich inner life. There's an understated defiance to it. Why do you think it took on that tone?

The song is kind of a reaction to traditional gender roles. It was sort of a rejection of conventional romance; it's not something that I needed. Sure, it might be something I would like, but I don't need to be whisked away on someone else's terms. I guess at some points in the song it feels more aggressive than any other songs that I've written. I was feeling sort of fed up. [Laughs.]

When it comes to music, people have tended to take the inner lives and thoughts of male artists more seriously than their female counterparts.

Yeah. You bring up a good point. I think in songs, and maybe in media in general, we've all just been so conditioned to believe that a woman really does need to be swept off her feet or something. I've always believed, or hoped, that it's an equal conversation.

In your vocal delivery, there's an outward tranquility, sometimes even a deliberate detachment, that makes it feel as though you're concealing as much as you are revealing. Is that how the act of singing works for you, as artful withholding?

If it is, it's maybe not something that I'm very conscious about. But I could see why you would think that. In some respects, [my singing is] sort of austere and stern. I guess "understated" is a word a lot of people have been using. But it's funny, because when I sing or when I'm recording, I think I'm singing my heart out — bleeding heart over here — and then I listen back and it sounds like I'm singing half-asleep. [Laughs.] Not to mention I just love singing low.

What singers do you admire?

There's a lot of singers that I admire that it's not so much about their singing as it is about their delivery, like Leonard Cohen or Bob Dylan. But then there's people like Joni Mitchell; my takeaway wasn't so much about her voice, which is often a falsetto, but more about her phrasing. But I guess [I also admire] the singers that you might think, like Nick Drake and Astrud Gilberto. She was a pretty big influence. I feel like around the time I was listening to more of her singing was around the time I realized the less you do with your voice, the more emotion comes across. And then there's singers like Bobbie Gentry, who wasn't even really on my radar when I was writing or singing. It wasn't until after I was done with the record. [Her music] felt so familiar when I caught on.

You've pointed out that people might expect you to make music that reflects what you heard growing up: Armenian and Arabic music. But instead your singing and songs are in some ways unmarked by region, culture or dialect. They reflect Americanized influences that you've accumulated. How do you make sense of that?

I didn't even really consider that the music we're making is so American, like, rooted in American history, it feels like: '60s and '70s folk and country-funk. It might be because even though I grew up in the Middle East, I was always primed for American culture, because we lived on an American compound and I went to an American school. So even though I'd move around a lot and I am from overseas, it was still a different experience, very sheltered from its immediate surroundings.

Even in adulthood you've moved around quite a bit for school and work. Your performing name captures the notion of a nomadic existence. How have you experienced that mobility?

I think leaving Saudi Arabia at a young age — a place that I felt so connected to and so invested in — in a way it helped me feel detached from any other place. I felt like, "Well, since I'm no longer at my real home, it doesn't really matter where I am." I felt a really profound sense of detachment. I just kind of went where the opportunity presented itself. They were all really off-the-cuff decisions. If I got a scholarship somewhere, I would go there. If I didn't get a scholarship, I would take a break from school and go back home and take somebody else up on an offer to go live with them. Just really played it by ear. I knew that as soon as I graduated from school, I could no longer really do that.

You've described the minimalist aspect of your sound as reflecting a way of moving through the world: paring down to essentials.

I think I sometimes try to reduce anything to its most minimal form, whether that's an emotion or a performance. I do really value that approach. Using brevity to communicate, I think, is the most effective way to get across to someone, to encapsulate a feeling.

I've found videos of you performing in LA in what looks like a small café.

Oh god! [Laughs.] I need to ask them to take that down. I know exactly what you're talking about.

You were performing under your own name then. When did you take on Bedouine?

That video — back then I was working full-time as a dialogue editor, so I didn't even have time to think about what I was doing. I think around the time I left that job and started freelancing and I actually had the flexibility to consider it more seriously is when I was thinking about project names and things like that. I think that would probably mark the time that I was ready to consider [my music] as something I would be compelled to share.

You'd been involved in music behind the scenes for a number of years. How did studying sound design and working as a music and dialogue editor for television and film change the way you hear a completed work?

I think it's had a lot of practical advantages. For instance, when Gus is producing something, I feel confident that I can step in and sweep through the session and do some janitorial editing and look through the takes and operate Pro Tools. Also, it becomes easier to communicate. You don't have to find the words to say what you mean — you can step in and just do it.

I love sound design and I actually did incorporate it. I made a soundscape on the record [for the song "Summer Cold"]. It was a soundscape of my grandmother's street in Aleppo, Syria. Her street, it's not quite an alley, but it is a small residential street in a pretty busy part of the city and it's flanked by two really busy streets. So the idea was that you hear busy traffic at a sort of medium distance on either side of this residential street. That was one of the constant sounds. The transient [sounds] consisted of what I remember to be the prevalent sounds I'd wake up to in the morning, which would be donkeys passing by with carts selling tanks of gasoline, men playing backgammon in the alley. You'd hear the porcelain of the coffee cups and tea cups. The metal gates rolling up. I thought about it a lot, that foggy in-between feeling when you're waking up. It was one of my favorite memories.

Bedouine comes out June 23 on Spacebomb and iTunes.