Accessibility links
'Pantsuit Nation' Book Review: Nostalgia, Uplift, Heartbreak. But Why? For Hillary Clinton's staunchest supporters, reading Pantsuit Nation may be like reading an ex's love letters just after a breakup: a flood of memories, a little too soon, and with no clear purpose. 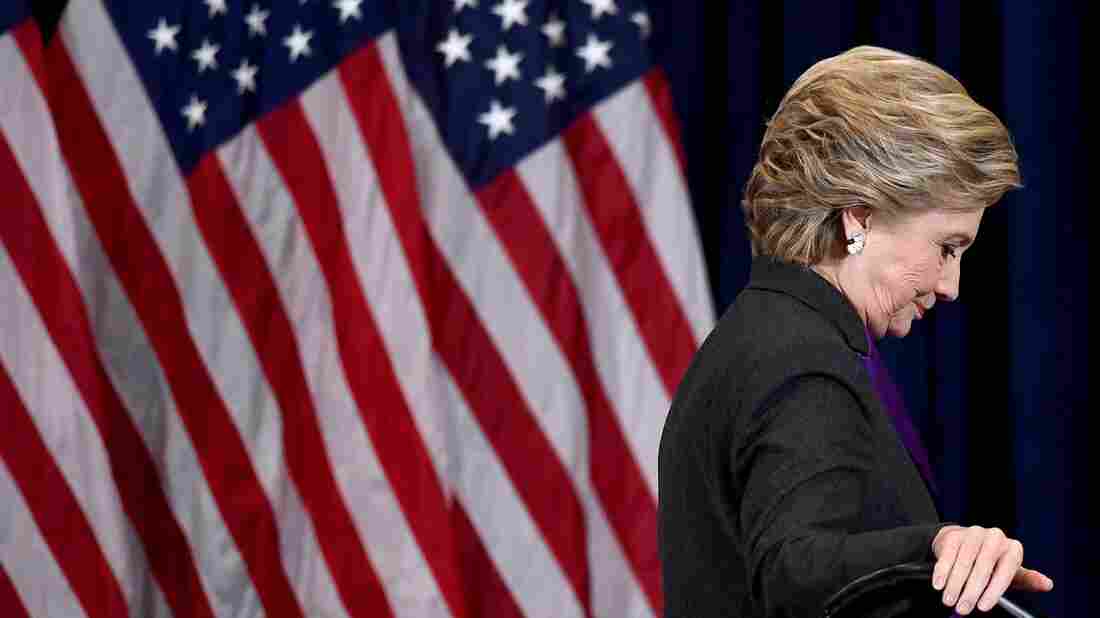 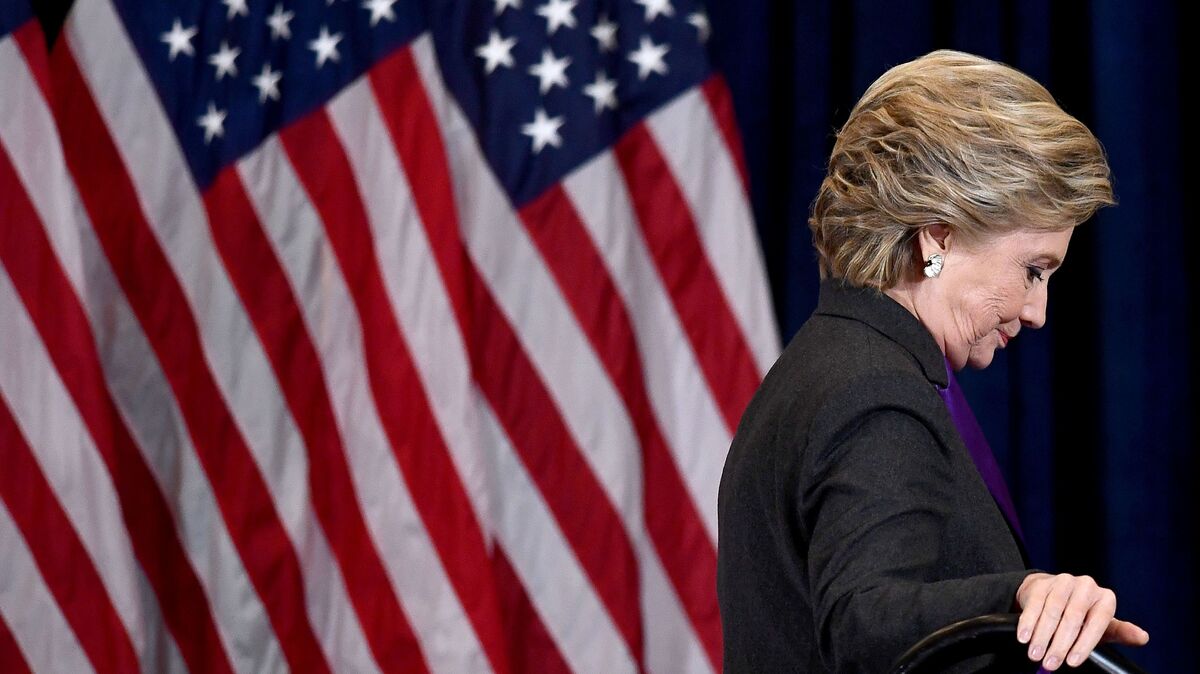 Hillary Clinton steps down a staircase on Nov. 9 after making a concession speech following her defeat to Republican Donald Trump.

Someday — after the wounds are a little less raw — they could be a fond reminder of a different era of one's life. Eventually, they could be warm memories of an intoxicating love affair. They might even teach a few lessons about how to do the next relationship differently.

So then, the question is: How soon is too soon?

For many Hillary Clinton supporters, the 2016 election's outcome was wrenching and unexpected. And for Libby Chamberlain, founder of the Facebook group Pantsuit Nation, six months was enough to put out a book looking back to the election and its aftermath. The new compilation of stories and photos documents life for Clinton supporters as they came to terms with losing a hard-fought, ugly election campaign.

Pantsuit Nation has a coffee-table-book feel, stitching together anecdotes from the Facebook group's members, along with striking portraits of the authors and other Clinton enthusiasts. The stories are in chronological order — going from the group's inception in October 2016 to the Women's March on Jan. 21 — but there is no connecting text weaving these stories together. Pantsuit Nation is not a history. It's a pointillistic picture of millions of people shifting from optimistic to shocked to devastated to resolute (and, in a few cases, back to optimistic again).

One can imagine people consuming it any number of ways. Sitting and reading it beginning to end — as this reviewer did — makes some sense, given the chronology of the book. But one could just as easily page through, taking in anecdotes here and there: an unemployed single mom taking welding classes, a Muslim woman responding to bigoted comments she overheard at the hair salon, a military member coming out as gay.

It's impossible to describe the book without also describing the controversy surrounding it. Chamberlain created the invite-only Facebook group Pantsuit Nation on Oct. 20, 2016, after the third presidential debate. It quickly became a phenomenon — right now, it has nearly 4 million members — and with that popularity came strife. Critics argued that white people were dominating conversation and using the group as a way of feeling "woke" without doing any real work. The group was also criticized for being too soft-focus and feel-good and not enough about concerted activism.

So when Chamberlain announced in December that she had a book deal for Pantsuit Nation, she didn't get the warmest response: People accused her of cashing in on other people's personal experiences and worried that she might use stories without the authors' permission — the posts in the Pantsuit Nation Facebook group were not written with a book in mind, they pointed out. 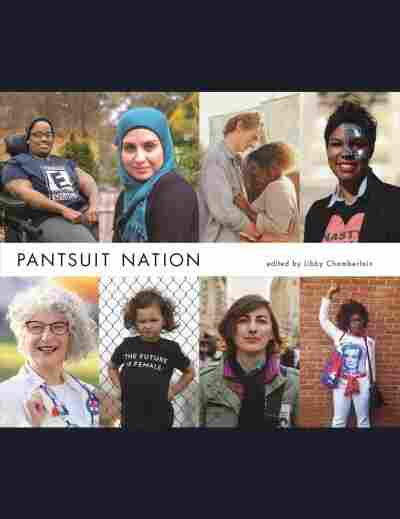 Chamberlain clearly tries to respond to critics in the book. It is a paean to diversity: Among the (many) identity groups represented are people with disabilities, people who are gay, indigenous, Muslim, veterans and former Republicans. Chamberlain also stresses that "each contributor granted full, enthusiastic permission" for the usage of their material, and says that proceeds from sales will go toward operating the Facebook group (which has dozens of moderators) and the Pantsuit Nation Foundation, an associated nonprofit.

Given the furious outcry when the book deal was announced, there are likely people whom that won't satisfy.

Indeed — and to state the obvious — there are plenty of people who simply will not enjoy this book at all. Some progressives, echoing critics of the Pantsuit Nation Facebook group, may find it too heavy on the uplifting messaging, too light on the activism. Likewise (and speaking of obvious), Trump supporters likely won't find much to cheer about.

The question then is about those people who reveled in the camaraderie that the Pantsuit Nation Facebook group created. For them, what does the book accomplish?

There are a couple of things the book does well. That diversity captured in the book will likely inspire some readers to feel more empathy toward people with different experiences from their own.

In addition, the book transports the reader back to the time surrounding Election 2016. Taken together, the stories are better than any poll or pundit could ever be at capturing that mood. Through its broad range of perspectives, the book brings back the confusion, pain and raw anger that many Clinton supporters felt on Nov. 9.

But what then? It wasn't that long ago, after all. Is there a broader purpose to bringing all that back right now?

Chamberlain writes at the end of the book about the power of these stories, saying she hopes they can inspire more political involvement: "Pantsuit Nation links the timeless method of using storytelling to drive social and political change with a modern ability to reach a large, digitally savvy audience eager to participate in collective action."

That may be true. But pushing forward is a tall order for a book that's necessarily centered around something that happened six months ago. So much about the book is steeped in Hillaryness, from the title to the repeated declarations of "I'm with her" to even the lettering — many of the highlighted quotes in the book are in what appears to be the Sharp Sans typeface (or something close to it) that Clinton's campaign used in its logos.

Plenty of people who pick up this book still embrace Clinton, so they may not have a problem with that. But as the Democratic Party tries to move on from the loss and find new champions for 2020 and beyond, it's easy to see how 250 pages of 2016-focused stories, no matter how sincere, might come too soon for some Democrats.

It's true that plenty of the stories do not mention Clinton or Trump or the election. It's those stories that naturally feel the most forward-looking and timeless, and that one can imagine firing someone up to get out and "participate in collective action," as Chamberlain hopes. But by virtue of being in a volume called Pantsuit Nation, even those stories are nevertheless — literally and figuratively — bound up in the 2016 time capsule that this book is.

This is where the breakup analogy might admittedly start to fall apart — scrapbooks of old mementos and love letters are never forward-looking; they don't convey stalwart optimism about the post-breakup future. Moreover, Clinton didn't break up with her supporters, nor they with her (or at least, not these particular supporters).

If one is going to liken the election's effect on Clinton supporters to a breakup, it's a particular kind of split, one that happened because of outside forces. One partner moves across the country, and both people miss each other, but there's nothing anyone can do to repair the hurt except wait and keep some distance for a while.

So you see your ex's occasional Facebook posts, hear about them from friends — or, in this case, you see their occasional speeches broadcast on cable news. Those old photos could be useful. They are a part of your history. They are a record of who you once were. Someday it may be time to burrow to the back of the closet and unearth them.

Someday may not be today, though.