Accessibility links
How Draft Horses Are Helping Upgrade Cell Towers In Wisconsin A company in Wisconsin has found a low-tech solution to the high-tech problem of maintaining cell phone antennas in hard-to-reach areas. It hearkens back to the state's logging heritage. 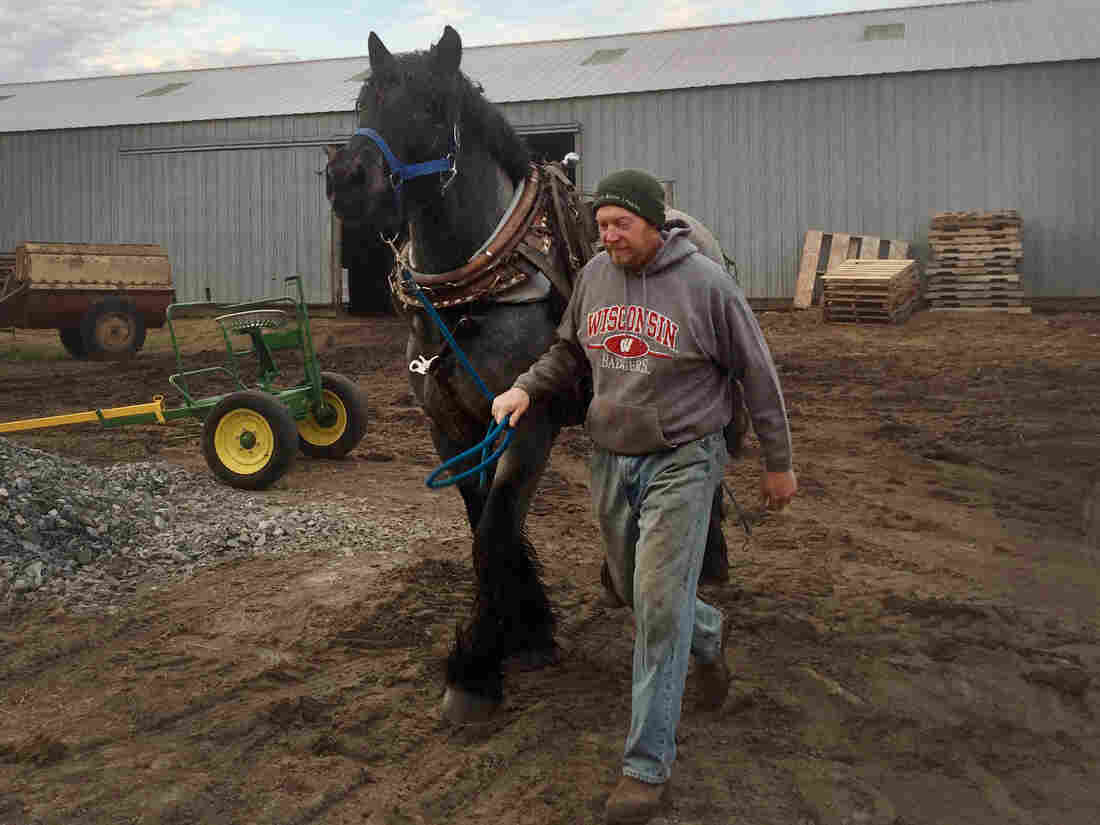 In Wisconsin, U.S. Cellular hired Jason Julian and his draft horses to help upgrade equipment on about 200 cell towers, some of which are served by hard-to-navigate access roads. Ann-Elise Henzl/WUWM hide caption 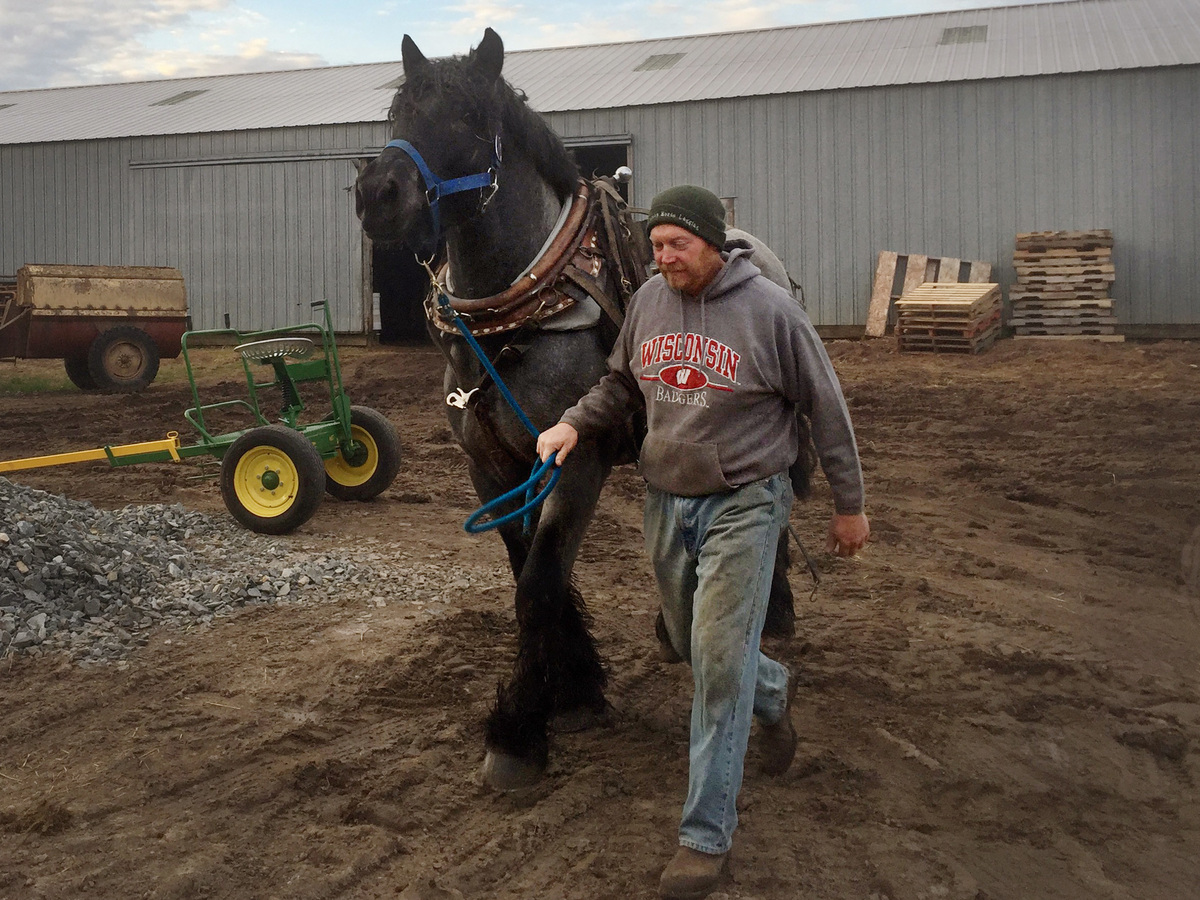 In Wisconsin, U.S. Cellular hired Jason Julian and his draft horses to help upgrade equipment on about 200 cell towers, some of which are served by hard-to-navigate access roads.

Companies that provide cell phone service are constantly racing to provide the most reliable signal. In Wisconsin, one of the providers has turned to a surprising option to get the job done: draft horses.

The horses are helping U.S. Cellular upgrade equipment on about 200 cell towers in Wisconsin, some of which are served by hard-to-navigate access roads.

"We call them roads. They're more of a path," says Brandi Vandenberg, the company's regional planning manager for engineering. "So when you don't have a firm structure to travel on, any type of inclement weather can make it a challenge." Wisconsin's deep snow and heavy rains can make the access roads all but impassable for trucks.

Vandenberg says with construction planned at so many tower sites, the company has a tight timetable for delivering equipment and scheduling technicians to install it.

Jason Agathen, a driver for CH Coakley, the logistics company hired to coordinate the tower upgrades, knows how tricky the access roads can be. Agathen has delivered thousands of pounds of electronics gear to the cell tower sites. One trip, he says, involved snow so deep it blew the transmission on an ATV.

So the company hired farmer Jason Julian of Medford, Wisc., and his draft horses to keep the tower upgrades on track.

Julian uses draft horses to do much of the work on his organic dairy farm and for a horse logging business during the winter. His Belgian Brabant are the type of working horses that were common on Wisconsin farms before motor vehicles took over much of their work.

Julian raises and trains the horses. For the last few months, he's been loading two or three of them into a horse trailer a couple times each week, and hauling it with his pickup truck to remote cell phone towers. On a recent morning, he took along Hannah, a bay roan, and Billings, a blue roan. As he approaches the cell tower, he surveys the surrounding fields.

Julian pulls over on the highway's shoulder, followed by his wife, Katrina, who's in a second pickup hauling a wooden wagon with a flat bottom and low sides. The two attach the horses to each other as Julian prepares to get to work.

How Smart Are Horses?

"I'm getting ready to hook them to the wagon and get ready for the truck to arrive, so when the truck arrives we have a minimal, minimal amount of downtime time to deliver the freight," Julian says.

Soon after, the delivery truck drives up. Julian hops into the wagon and instructs his horses to back up to the truck. The workers transfer their cargo to the wagon, unloading a half-dozen boxes, each holding an 8-foot antenna. Julian then leads his team to the base of the cell tower. It's only about 300 yards away, but out of reach for the big delivery truck, which would have become mired in the muck.

"This is a cakewalk for them," Julian says. "They're used to being in the woods with me in thigh-deep snow and mud, and have a 1,500 pound log hooked behind them. So this is pretty easy stuff for them."

Julian says each load for the cell tower upgrades is usually about 2,000 pounds. Although that's heavier than a log, he says it's not a challenge for the horses because most of the sites are on relatively flat terrain.

Yet he says one recent delivery was tougher than the others. It was in a hilly area called West Salem. Julian says it took his team about 90 minutes to make the steep climb to the tower.

"It had constant switchbacks, super steep, just unbelievable terrain, and we made it," he says. "[W]e had to use a piece of firewood actually to block the [wagon's] tires. About every 40 or 50 yards towards the top we'd block the tires and give the horses a breather."

One of the horses working that job was pregnant, and when she later gave birth, Julian named the foal Salem in recognition of the tough cell tower job.

Agathen says he gets a kick out of the fact that horses have proven essential to the U.S. Cellular project.

"I'm from the city, so I don't get to see a lot of horses to begin with. And seeing what he can do with them, it's amazing to begin with. The control he has — and they've been using horses since the beginning of time from way back then to now. It's pretty neat," Agathen says.

CH Coakley says it won't hesitate to use horses again, the next time modern vehicles fail to get the job done.