Accessibility links
'No One Can Pronounce My Name' Is A Charming Take On Loneliness And Connection Set in an Indian-American community in suburban Cleveland, Rakesh Satyal's new novel uses intertwined plots to explore the comedy of everyday life. Critic Maureen Corrigan says readers will be amused. 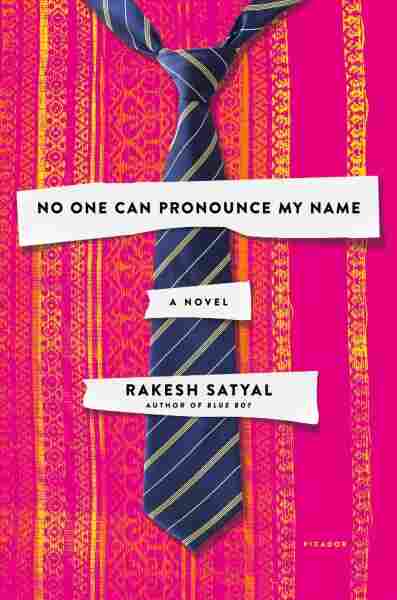 No One Can Pronounce My Name

Title
No One Can Pronounce My Name
Author
Rakesh Satyal

Rakesh Satyal's new novel checks off a lot of boxes, but its charm lies in the fact that it wears all of it various identities so lightly. This is an immigration story, a coming-out story and something of an old-school feminist story about a timid woman learning to roar.

Yet, there's nothing preachy or predictable about Satyal's novel; rather, the most cumbersome thing about it is its title, which I've delayed saying for as long as possible. It's called No One Can Pronounce My Name, which sounds aggrieved when, instead, this is novel that invites readers to be amused. Satyal wants us all to laugh, together, about the comedy of errors that often typifies everyday life.

No One Can Pronounce My Name is set in an Indian-American community in suburban Cleveland, Ohio. Ranjana is a middle-aged wife and mother whose son has just departed for college — Princeton, no less.

Ranjana first read Interview With A Vampire when she and her husband emigrated to America; we're told it was her way of trying to "permeate the wall that separated her Indian life from the omnipresent glitz of American pop culture."

Now, though, with her son off at college Ranjana's days are too solitary in her empty house. So, she takes a job as a receptionist in an Indian proctologist's office. This job, along with her participation in what turns out to be a vicious writer's group, are Ranjana's tentative ways of trying to enter a wider world.

The other main character here, also a middle-aged Indian immigrant, is even more adrift. Harit lives with his mother, who's deranged by grief for his older sister, the victim of a stupid, deadly accident.

To comfort his mother, whose eyesight is conveniently dimmed by cataracts, Harit dresses up every night in his dead sister's saris and pretends to be her. In ways Harit dare not name even silently to himself, this dress-up game has become consoling to him, too.

Clothes also become the conduit for leading Harit out of his isolation. He lands a job in the Men's Accessories Department (called "Men's Furnishings") at the quaint Harriman's Department Store. There, an older gay man named Teddy takes Harit under his wing and introduces him to the cheering ritual of happy hour at T.G.I. Friday's in a nearby mall.

But not everyone at Harriman's is so welcoming. Here's Satyal's description of the daily dynamics in the employee break room:

By eight-thirty, the fifteen or so salespeople of the morning shift would gather and loiter with their coffees, bagels, stinky fast-food breakfasts, and gossip. ... It wasn't that they were mean to Harit, but except for a smile in passing or an odd question about his ethnicity (... "In India, do you drink eight glasses of tea a day instead of water?") they rarely engaged him directly in conversation. ...

For the most part, they left the socializing to Teddy. His status as Harit's companion in Men's Furnishings made him the obvious stand-in for a conversational partner, and there was an unspoken relief that no one else had to handle Harit.

Both Ranjana and Harit pine for some kind of deep connection to other human beings, but they're clueless as to how to make that happen. Their shared situation may sound glum, but because No One Can Pronounce My Name is essentially — and delightfully — a comic novel, the intertwined plots here are buoyant rather than blue.

It says something about both the reach of Satyal's story and his wry skill as a storyteller, that, while I was reading, I kept thinking of Barbara Pym, who wrote mostly about the lives of tweedy English spinsters with similar warmth and humor. No One Can Pronounce My Name explores the politics of sexual identity, as well as the immigrant and first-generation American experience, but, unfashionable as it may sound, the novel's greater achievement lies in the compassionate, comic way it explores the universal human experience of loneliness.