Accessibility links
'Priestdaddy' Shimmers With Wonderful, Obscene Life Patricia Lockwood's scabrous memoir of growing up with a married Catholic priest for a father is a little overreliant on quirky family details, but scorching in its approach to the Catholic Church. 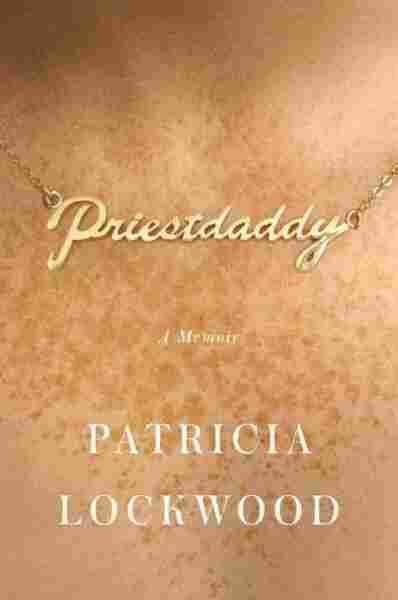 "I like to think I sprang from a head; I like to think the head was mine," writes Patricia Lockwood in Priestdaddy, her memoir of growing up with a Catholic priest for a father.

But no. She sprang from the (oft-exposed) loins of Father Gregory Lockwood, who converted on board a submarine while watching the Exorcist: "That eerie, pea-soup light was pouring down, and all around him men in sailor suits were getting the bejesus scared out of them, and the bejesus flew into my father like a dart into a bull's eye."

It was, he boasted, "the deepest conversion on record." He became a Lutheran, and then a Catholic priest, keeping his wife and family through special Vatican dispensation.

Father Lockwood rarely wears pants, washes himself with dish soap, and plays the guitar like "a whole band dying in a plane crash in the year 1972." Additionally, he "despises cats. He believes them to be Democrats. He considers them to be little mean hillary clintons covered all over with feminist legfur. Cats would have abortions, if given half a chance. Cats would have abortions for fun."

In Priestdaddy, portraits like this abound — in which each sentence shimmies with wonderful, obscene life, but the person behind it isn't quite visible through the dance. Her mother gets similar treatment: "If Daisy's voice was full of money, my mother's voice is full of coupons for free appetizers." They almost give away more about Lockwood than her subjects.

For Patricia Lockwood, the power runs one way ... conservative men controlled her childhood, and she's punching up, as hard as she can bear to.

But Priestdaddy hints, in between these wackily affectionate sections, at a darker undescribed history – "that I had been raised in an alternate reality, that my childhood sky was green." Lockwood's descriptions of trauma, a rape and a suicide attempt, for instance, are mere paragraphs, and then we return once more to the wheeling, dancing circus. She doesn't owe us these revelations, of course, but Lockwood is best when she is concrete. The force of her sentences, though stunning, is not enough to carry the family portrait past the first 150 pages.

Her writing about the Catholic Church, however, is scorching. It's been a hot topic lately, what precise degree of compassion or scorn or blame or help or whatever other cocktail of post-Trump feelings is owed to white, right-leaning Christian men. Are they oppressing minorities or, wait, are the coastal elites oppressing them? For Patricia Lockwood, the power runs one way: These conservative men controlled her childhood, and she's punching up, as hard as she can bear to.

Of the priests and seminarians who filled her childhood home, many of whom turned out to be either child molesters or their protectors, she thinks, "I had no real power; it was men like these who were in charge of my life. If they decided tomorrow I had to cover my hair or wear skirts or pray separately, or be barred from reading certain books, or take certain pills and not take others, or be silent in the presence of men, I would have to do it."

At her very best, Lockwood is antic, deadpan, heartbreaking — and so, so gross.

The day she publishes her throat-punch of a poem "Rape Joke," she overhears her father and a seminarian talking about another priest caught kissing a 14-year-old girl: "'She shouldn't have put him in that position,' I hear a male voice say, and an old familiar wildness flutters up in my chest and into my throat, sending feathers and flames into my voice box until I cannot speak, that same phoenix heat that still rises up in me no matter how many times I force it down."

Passages like these are searing and true, while the quirky family anecdotes begin to seem repetitive after a time. Lockwood shines when covering specific events: her other big piece of nonfiction, some reporting for the New Republic on a Donald Trump rally, has the same sensibility with a more defined target. At one point in Priestdaddy, she describes an idea as "exact change in the form of a concept," and that's the way her best phrases feel: In the New Republic piece, Melania "wore an outfit best described as Sensual Band-Aid and took small, ruthlessly edited steps."

A few days after the story came out, the New Republic briefly let her run their Twitter account, which she used to tweet "f— me daddy" at Trump There she is: the flasher under the poet's robes. At her very best, Lockwood is antic, deadpan, heartbreaking — and so, so gross.