Accessibility links
Book Review: 'House Of Names,' By Colm Tóibín Colm Tóibín ventures far afield — in time and place — for this heart-stopping take on the tragedy of Clytemnestra and her family, reanimated with suffering the ancient Greeks never imagined.

'House Of Names' Is A Violent Page-Turner, And A Surprising Departure

'House Of Names' Is A Violent Page-Turner, And A Surprising Departure 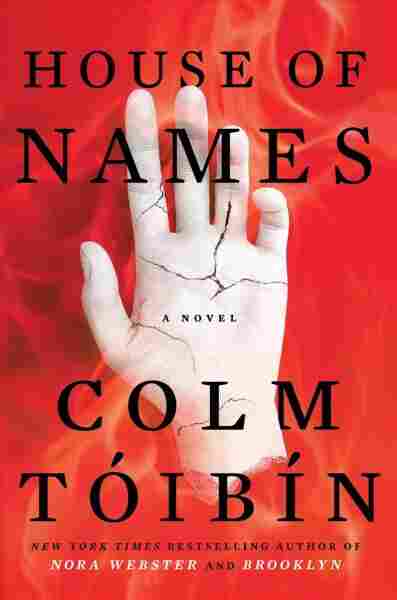 Colm Tóibín has ventured to ancient Argos — far from the decorous, restrained worlds of Henry James, coastal Ireland, and mid-20th century Brooklyn we've seen in his earlier books — in this heart-stopping novel based on Clytemnestra's family tragedy.

Although he's taken some of his familiar, familial preoccupations with him — including strained family dynamics — House of Names is a surprising turn for Tóibín, a violent page-turner about the mother of all dysfunctional families and the insidious ravages of revenge and distrust. He has borrowed the main characters — Agememnon, his wife Clytemnestra, and their three children, Iphigenia, Electra, and Orestes — from the ancient Greeks, and re-animated their tragedies with intimate sagas of suffering you didn't hear from Aeschylus, Sophocles, and Euripides.

Curiously, Tóibín hasn't attempted to update the classics by fast-forwarding centuries — as Eugene O'Neill did in Mourning Becomes Electra, his retelling of Aeschylus' Oresteia, set in New England in the 1860s. Nor does he seek modern relevance by drawing explicit parallels to our times. House of Names is set firmly in ancient Greece, but in Tóibín's take, the power and influence of the ancient gods is on the wane, and with Christ still centuries off, there's a dangerous void in the sphere of divine influence on the affairs of mankind.

As in Aeschylus, the cycle of revenge vendettas are not struggles of right against wrong, but part of an inexorable, weirdly logical chain of atrocities. What's different in Tóibín's novel is that this savagery is driven not just by Fate and the Furies, but in large part by psychology. In visceral, accessible language, Tóibín brings us close to the members of the house of Atreus — who, in the absence of gods, bear responsibility for their actions.

A Slow Simmer Of Grief And Strength In 'Nora Webster'

What's the worst tragedy that can befall a mother? Tóibín makes us feel Clytemnestra's anguished pain and outrage when her husband sacrifices their 16-year-old daughter Iphigenia to the gods in the hopes of favorable winds for his warships. Livid, she enlists the aid of wiley Aegisthus, her new bedmate, to plot her revenge. (There's already plenty of bad blood between Agamemnon and his cousin Aegisthus, but Tóibín wisely avoids diffusing his intense tale with too much backstory.) Upon Agamemnon's triumphant return from Troy, Clytemnestra greets him with a warm bath and sharp knife to the throat.

Although Orestes is one of few characters left standing at the end of the book, his fate is no less tragic than that of his parents and sister — and even worse than Hamlet's, for it takes years for him to learn about his father's death. Why years? Abducted by Aegisthus' minions, Orestes escapes his evil keepers with two other kidnapped boys, who grow into manhood together on an old woman's remote seaside farm. The lost boys' trials and tribulations — Tóibín's fabrications — are among the most vivid scenes in the novel.

As in the Greek sources, Orestes gradually realizes that he must avenge his father's death by killing his mother. But part of Orestes' tragedy is that he operates on partial — and often inaccurate — knowledge. In a palace of dark corridors filled with shadowy guards whose allegiances are unclear, he doesn't know whom to trust. His angry sister Electra, intent on her own revenge and power grab, is little help.

Tóibín plays all this with sinister mastery. He channels the female characters directly, while Orestes' point of view is delivered in a tight third person narrative. Clytemnestra's chilling first lines, following her murder of Agamemnon, drip with sang-froid: "I have been acquainted with the smell of death ... It is easy now for me to feel peaceful and content."

Turning pages with pounding heart, I wondered if I could have connected this book with Tóibín if his name weren't on it.

Electra, although portrayed less movingly, is as fierce as her mother — and as deft at dissembling. She warns her naïve brother that he must learn to listen and hear even as she marginalizes him: "This is a house of whispers ... What matters is that you must not meddle in things that are beyond you."

The violence is staggering, with people thrown into dark dungeons for days without food or water, throats slashed, heads bashed. Turning pages with pounding heart, I wondered if I could have connected this book with Tóibín if his name weren't on it. I don't think so — despite some telltale signs, including the fraught family baggage, circumspect homosexuality, and themes of loss, exile and return. But House of Names works because of the empathy and depth Tóibín brings to these suffering, tragically fallible characters, all destined to pass on "into the abiding shadows" — yet vividly alive in this gripping novel.