Accessibility links
Flap Over Kushner Family High-Rise Pitch Prompts Concern Over Visa Incentive A company with ties to White House advisor Jared Kushner has drawn criticism for invoking the family's connection to the White House and using a visa program to raise money for a luxury project. 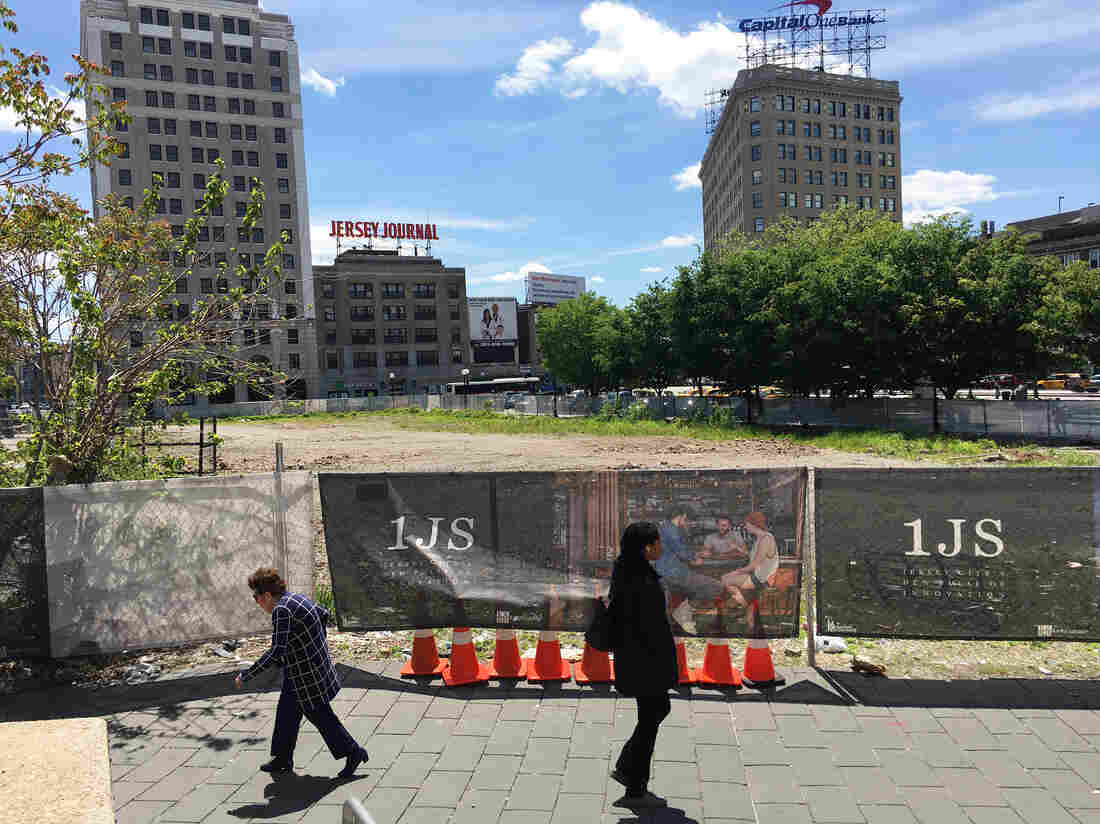 A real estate company with ties to Jared Kushner has drawn criticism for invoking the family's connection to the White House to raise money for a luxury high-rise in One Journal Square, Jersey City, N.J. For now the site is an empty lot surrounded by a chain-link fence. Joel Rose/NPR hide caption 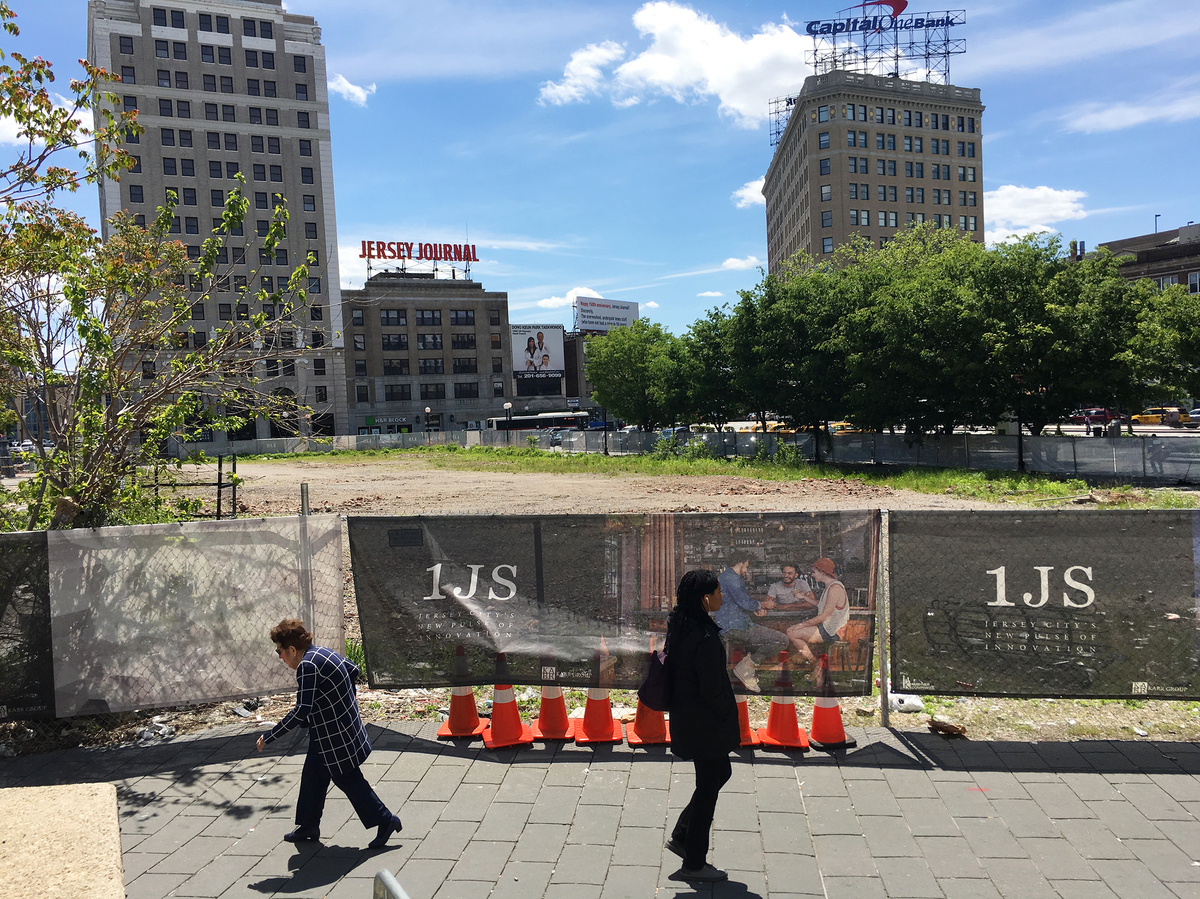 A real estate company with ties to Jared Kushner has drawn criticism for invoking the family's connection to the White House to raise money for a luxury high-rise in One Journal Square, Jersey City, N.J. For now the site is an empty lot surrounded by a chain-link fence.

The family business of Jared Kushner, President Trump's son-in-law and senior advisor, wants to build a pair of skyscrapers in a gritty New Jersey neighborhood.

But the Jersey City project faces a number of hurdles.

This week, it ran headlong into a new one — an ethics flap, after Kushner's sister highlighted her family ties to the White House while pitching the development to wealthy Chinese investors. That's prompting closer scrutiny of the project, and the controversial immigrant investor visa program that could help finance it.

The EB-5 visa program gives immigrants a visa and a shot at a green card, if they invest in a project that creates jobs in the U.S. It was meant to support hard-to-finance projects, particularly in rural areas and distressed urban neighborhoods. But some question if that incentive is really needed to build luxury residential towers.

"It's an example of a project which probably could attract capital without the benefit of EB-5," said Gary Friedland, a scholar-in residence at the NYU Stern School of Business.

Friedland and his wife Jeanne Calderon, a professor at NYU, have been studying the EB-5 program for years. They found that developers across the country have raised at least $10 billion dollars for more than 50 major projects this way. They say immigrants are willing to lend money for the promise of almost no financial return, because what they really want is a visa. So the EB-5 program helps developers pad their profits.

"It could save the developers tens to hundreds of millions of dollars in financing costs," said Calderon.

The Kushner Companies is looking to raise $150 million from investors overseas for the project known as One Journal Square. When it's finished, the developers say it will include two towers and hundreds of luxury apartments with commanding views of lower Manhattan.

But for now, it's an empty lot surrounded by a chain-link fence.

"I have watched Journal Square go up, and go down," said Don Smartt, who runs the Journal Square Special Improvement District. While Jersey City neighborhoods across the river from Manhattan have been booming for a decade or more, Journal Square has fallen behind. It's a mix of crumbling movie theaters, office buildings and chain stores that feels a long way from the city's downtown renaissance. That's why Smartt is excited about One Journal Square.

"We hope that the current developer finds the support necessary through all legal means to make this project a reality," Smartt said.

The Kushners have used EB-5 financing before. For example, raising $50 million for Trump Bay Street, a luxury apartment building on the Jersey City waterfront.

"Nothing about what they've been doing is out of the ordinary in what many real estate developers in NYC have been doing over the last few years," said Jason Barr, the author of the book Building the Skyline, and a professor of economics at Rutgers University, Newark.

But the Kushners are out of the ordinary, because Jared Kushner is President Trump's son-in-law and senior advisor. Ethics watchdogs howled when the Kushner Companies pointed out its connection to the White House in a presentation to investors in China last weekend. The company has apologized, and says Kushner has stepped away from his role at the company.

White House spokesman Sean Spicer said the administration is evaluating all visa programs, including EB-5, "and whether or not they are serving the purpose that they were intended to, whether or not we're making sure that we do what's in the best interest of the American worker."

The controversy over EB-5 is just one of the problems facing the Kushner Companies' project in Jersey City. Under pressure from constituents, Jersey City's mayor announced that he's no longer supporting a big tax break for One Journal Square. And the project's anchor tenant, the office space provider WeWork, decided not to sign a lease.

"Journal Square's future and the city's future requires something better than an empty lot," Smartt said.

The last time somebody tried to a build a skyscraper on this site, Smartt added, the developer spent nearly a decade trying to put the financing together. And then finally gave up.